A shortcut to convenience and cash
Thailand
Special Report

A shortcut to convenience and cash

Pakdee Tanapura, head of the Thai Canal study team at the Thai-Chinese Culture and Economy Association, argued that because of current congestion in the Malacca Strait, the Thai Canal would provide another channel for ships. 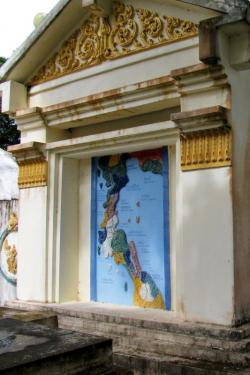 CROSS-COUNTRY: A map of the Isthmus of Kra, through which the proposed canal would pass. PHOTO: Pongpet Mekloy

Shipping times between the South China Sea and the Andaman could be reduced by at least two or three days with the distance cut by 1,200km compared with the Strait of Malacca. There are also various benefits for southern Thais.

"The benefits are obvious in all sectors including industry, agriculture as well as services. But most importantly, the project will help to eliminate poverty from Thai society," he told Spectrum.

"With the injection of massive funds in the first phase of the canal construction which will take five to 10 years to complete, such investments will create demand for highly paid labour forces.

"This will send a ripple effect into the other sectors of the economy such as transportation, equipments, machine tools and other facilities."

He expects the Thai Canal project to create more than 3 million jobs within 10 years. On the other hand, southerners will be less dependent on the fluctuating prices of rubber products, palm oil, and other commodities.

"The latest poll taken among 2,500 villages in 14 provinces conducted by the Songkhla University shows that there is an overwhelming of majority-- 74% -- in favour of the construction of the canal," he revealed, while speculating that the canal will help ease the unrest in the South.

"Putting in more troops does not guarantee security in the region," he said.

"The construction of the Thai Canal will create a more equitable distribution of income, promoting wealth among the population.

Prof Dr Harald Wagner, a former World Bank consultant who has worked on canals in Europe and now teaches civil engineering at King Mongkut's Institute of Technology Ladkrabang, told Spectrum that the Thai Canal will be a one-government project, with its 135km length at sea level across Thailand's narrow Isthmus of Kra requiring no elaborate system of locks. Its estimated cost is around US$22-28 billion.

"A two-government project is much harder to finance in term of geotechnical risk and concession period, while the second biggest advantage of the Thai Canal is that we will not have locks because we do not have to lift the ships up and down three times," he said, in reference to the Panama Canal's operations.

"This is a sea-level connection similar to the Suez Canal in the Mediterranean Sea and Red Sea."

Dr Wagner said the first logical step for the Thai Canal is for the government to finally make a clear decision on its implementation, and then set a timeframe.

"If the Thai government can make a decision then 2018 and 2019 should be the time for the feasibility study.

"Two years should be enough because a lot has been done already and all we have to do is to update this information."

"After two years we should have contact documents, designs, and we should start a roadshow to sell the project to the contractors," he added.

"We also need to create a Thai Canal society which has the right to give a concession on behalf of the government."

If the comprehensive feasibility study can be done within two years then the canal could be built within a 10-year timeframe, according to Dr Wagner's estimates.

Ilya Espino de Marotta , executive vice-president of the Panama Canal Expansion Project told Spectrum last year that a sea level canal in Thailand is possible because "the topography allows it" and canals are attractive because they are good for both the environment and economy.

"It is good for the world's environment because you usually provide a shorter route which means there are lower CO2 emissions," she said in a capacity as a person who over saw all aspects of the US$5.2-billion Panama Canal expansion from its start in 2007 to its completion in 2016.

"The [Thai] canal can provide economies of scale because moving goods through water is more advantageous than by land as it should reduce shipping costs."

The country can also gain from tolls and revenues that come from the users while port and related businesses such as railroad companies can benefit from extra income via transshipment.

"You can also provide to these ships whatever they need such as food, fuel and repairs," she added.

Ms de Marotta's recommendation is to create an in-depth economic and impact research on finance, marketing, environmental concerns, social considerations and engineering before trying to convince people as to how the canal project will benefits the local community and the country as whole.

Panama saw a six-month promotional tour and a national referendum before the expansion project began.

"At the end of the day, 48% of the population that could vote went to vote, and 75% voted in favour," Ms de Marotta said.

"Once we defined and analysed the project, because we were very concerned with the cost of the project going too high, we decided to stick by it, we did not change anything, we did not modify it, and we still spent $200 million on top of the original estimate, but for a nine-years construction project."

Meanwhile, Norio Yamamoto, president of the Japanese Global Infrastructure Fund Foundation shared Ms de Morotta's view that the Thai Canal should be funded by multiple parties instead of making a deal with one entity or one government.

This would avoid losing a strategic water way and benefits to a third party, as was the case when the United States and Nicaragua lost out to a Chinese company.

The future of the $50-billion Nicaragua Canal remains unclear after Chinese billionaire Wang Jing promised to bankroll it via his Hong Kong-based HKND (HK Nicaragua Canal Development) Group, But these funds were not forthcoming.

The US was in control of the Panama Canal for 80 years as part of the deal to help Panama gain its independence from Colombia.

It was handed back in 1979, so Panama funded the expansion project, which Ms de Morotta oversaw, itself.

The country put in $2.9 billion of its own money and borrowed a further $2.3 billion from various banks and multilateral lenders such as the World Bank. Panama now earns nearly $2 billion a year in tolls from ships using its waterway.

Dr Yamamoto said the Asian Development Bank and the World Bank are two possibilities for Thailand to borrow from, but the World Bank "is a typical bureaucratic organisation" which could pose to be challenging.

The Chinese Asian Infrastructure Investment Bank, on the other hand, may play a different role from the ordinary international financing instructions.

"The Belt and Road initiative is China's national agenda and the Thai Canal could be part of the new maritime Silk Road, so they [the Chinese bank] are very much interested in the project," he said.

"I am not sure whether the Japanese will prioritise the project, because they already have a lot of projects to finance in Asia, but the Thai Canal is closer to Japan and it will create a special route from Japan to the Middle East," Dr Yamamoto said.

The Strait of Malacca is the world's narrowest at 1.5 nautical miles, not to mention one of the world's busiest, with nearly 100,000 vessels passing through it each year, accounting for around a quarter of global traded goods.

"Within this kind of scope, it is no surprise that Japanese financing groups would want to put a certain portion of their investment into to this area," Dr Yamamoto said, while revealing that the project will certainly be under consideration by the Global Infrastructure Fund Foundation if an offer is on the table.