After 50 years Lido Theatre will bow out at the end of the month. We take a look at the place and the people that have helped define our modern movie-going experience

The Lido Theatre opened on June 27, 1968, a 1,000-seat movie palace in the fast-modernising neighbourhood of Pathumwan. The first title on the marquee was Guns For San Sebastian, a cowboy film starring Anthony Quinn.

At the end of this month -- barring a miracle -- Lido will end its 50-year run. The film on the marquee, though there will be more than one title, is likely to be Solo: A Star Wars Story.

Originally a stand-alone movie hall, Lido opened two years after the 800-seat Siam Theatre -- burnt to the ground during the political mayhem in 2010 -- and when the 1,000-seat Scala followed in 1969, the holy trinity of Bangkok's cinema strip contributed to the transformation of the cultural and commercial topography of the capital, expanding the radius of modern progress from the traditional area of Charoen Krung and Silom. The three movie houses, for nearly 50 years, have come to define the area of Siam Square, a high-energy youth hangout, tourist hot spot, and one of the most expensive plots of land in the country.

The 1,000-seat Lido in 1960s wasn't extravagant: Chalermthai, the legendary cinema on Ratchadamnoen, seated 1,500 while Colesium seated nearly 2,000 (both places long gone since the 1980s). The Tansacha family, which was a partner in Chalermthai, decided to open Siam and Lido in the area that, at that time, was considered dull and underdeveloped.

But the naysayers were proved wrong when the cinemas became popular and played a significant role in the history of urban development. In 1993, the original Lido was damaged in a fire. Apex, the company that leased the land from the landlord, Chulalongkorn University, turned the place into a three-screen venue at 200 seats-plus each -- that was the decade when stand-alone cinemas began to disappear and were replaced by neon-and-plastic multiplexes embedded in malls.

Like the loss of Siam Theatre, Lido's imminent departure will reduce it to memory and nostalgia (meanwhile the life of Scala, a subject of much distress, is likely to be extended for another six months, though official announcement has yet to be made).

Those who grew up in the 70s and 80s remember Lido's airy foyer and wide staircase leading up to the loft entrance, where yellow-jacketed ushers waited to inspect your tickets.

In those days when TV just began to appear in homes and when movies were still the prime source of entertainment, Siam and Lido were the nerve centre of the nascent pop-culture. Stories of a mob at the ticket booths were familiar. In 1973 when The Exorcist opened, the film's preceding (dis)reputation sent a swarm of excited viewers to the Siam Theatre at the evening screening, and another screening was added immediately at the Lido. In 1976, the same scenario happened: the horror film The Omen opened at Siam Theatre, at which the eager crowd surged inside and wrecked the ticket booths. According to Nanta Tansacha, who has managed Apex after her father, another screening was added at the Lido, but the crowd mobbed the ticket booth again and they had to open another screen for the film right away at the Scala.

The strangest story is when the original Star Wars was screened at a charity event at the Lido on Nov 30, 1979. Because the film hadn't been released in a regular programme before (that was the period when Hollywood boycotted Thailand's high import tax) the demand to see George Lucas' space saga was overwhelming. Film-starved people queued up at the Lido at 6am, and when the box office opened, the long wait and fear of being shut-out heated up the crowd and a brawl broke out. Around 9am, policemen from Crime Suppression Division had to rush to the cinema to calm the situation. The incident was on the front page of the Bangkok Post the following morning.

Later in the late 1990s after Lido became a three-screen venue, it grew to be known as a haven for small films (though the credit also has to go to distributors who buy the rights of those films and subsequently to House RCA, which is even more non-mainstream in its programming). Having three screens means Lido can shuffle titles around, mixing blockbusters with lesser-known titles -- though the fact of the market remains that Avengers makes more money and has categorically more show times at Lido than, say, a Japanese film.

As it rounds its final stretch, the quaint, old-school charm and odd decor of the Lido takes on a ring of sadness and nostalgia: the stripes of neon, the concessions stand placed weirdly near the entrance of a restroom, the old CD purchased sometime in the late 1990s that is still played during breaks (My Heart Will Go On, Can't Fight The Moonlight), and the half-gaudy, half-playful sense of style, a warm glow of anachronism.

But to visitors and regulars, what makes the cinema special is the human touch: the person who picks up the phone when you call to inquire about showtimes; the middle-aged ladies behind the box office; the yellow-jacketed ushers. The Lido will be gone -- and sooner or later, Scala -- but it's the people as much as the place that will remain in memory, even in history.

SAROT SOOKPROA's face may not be familiar to Lido regulars, but his voice certainly is. For nearly 20 years, the operator and former radio DJ has answered the landline phone and given information about showtimes, synopsis, schedule updates and changes, to inquirers, a friendly human touch unique to the Lido at a time when automatic voice machines replaced the good-old operator everywhere. And Sarot does it with panache: he doesn't just give information but chit-chats with callers, makes jokes and suggests personalised schedules to those who want to see a few movies in a row. "I guess regular callers see me as a friend because I seem to brighten up their day," he said. Like others, he's not quite sure what he'll do when Lido is closed at the end of the month.

SOMSAK WONGYADAENG has been an usher at Lido since 1988, when he was in his early 20s. Before that, he worked at Chalermthai, Bangkok's legendary palatial cinema on Ratchadamnoen Road that was torn down in 1989 (his parents were also employees at Chalermthai). At Lido, he became one of the signature yellow-jacketed men stationed at the entrance, a symbol of elegance that over the years has acquired a quaint air of dignity and professionalism. When a fire broke out at the original 1,000-seat Lido in 1993, Somsak was at the scene. "The movie Dr Giggles was showing [a horror film]," he recalls. "Then we saw smoke and started moving people out." Somsak has been an usher all his life, and at Lido he's still doing it the old-fashioned way: tearing a stub off a ticket and showing an audience to her seat. He still doesn't know what he'll do after the cinema closes.

USA METHANONTPAISAL has worked at Lido for 30 years, from those early days when she had to write down seat numbers manually on every ticket. In those days, a ticket had several tiers: 30 baht at the front rows, 40 and 50 further to the back of the room. Now she presides over a small computer screen and a printer, though the green paper ticket still has a vintage feel (120 baht). Lido regulars remember her face — a good-humoured auntie who remains patient when you take too long to choose a seat. "When the cinema closes, I'll probably stop. I've been doing this for a long time." 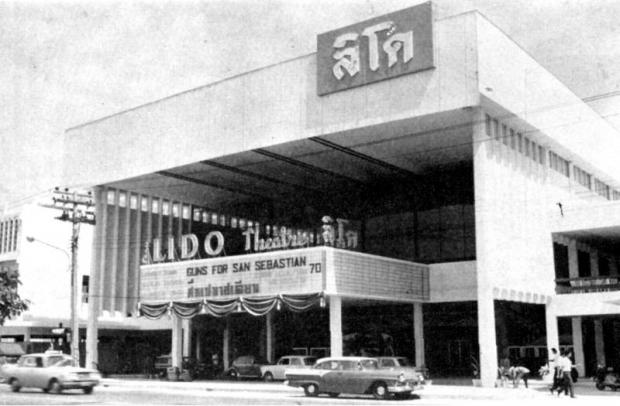 Lido Theatre in June 1968. Guns For San Sebastian was the first film on the marquee. 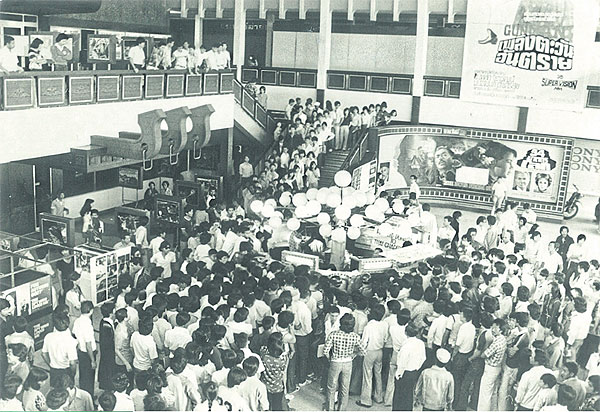 A scene of near chaos in the lobby of Lido on Nov 30, 1979, when thousands of movie-goers mobbed the booth for a special screening of Stars Wars and The Spy Who Loved Me. Photo © Bangkok Post Archive 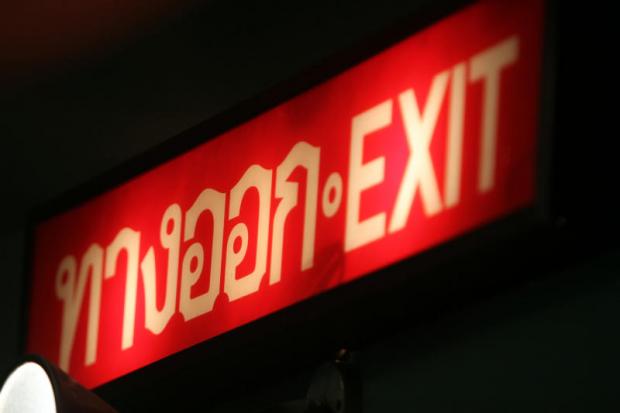