To celebrate the 250th anniversary of the establishment of Thon Buri as the former Thai capital last year, the Fine Arts Department has been conserving the old walls and moat of Thon Buri. It recently made public its findings about newly discovered archaeological sites in Bangkok, some of which are already tourist attractions. 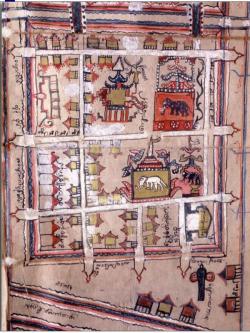 A map of old Thon Buri, believed to be the work of Burmese spies. Photos: Pichaya Svasti 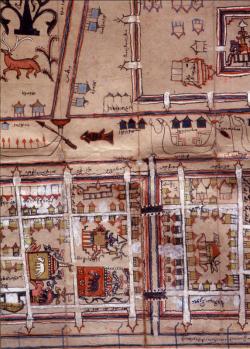 A map of old Thon Buri, believed to be the work of Burmese spies. Photos: Pichaya Svasti

Thon Buri had existed long before King Narai the Great (1656-1688) of Ayutthaya Kingdom made it a fort town for the capital of Ayutthaya. Two forts -- the Wichayen Fort (now the Wichai Prasit Fort) and the other -- were established on the west and east sides of the Chao Phraya River respectively in 1685. After the fall of Ayutthaya in 1767, King Taksin the Great chose Thon Buri as the new capital because of its good location for farming, trading and military affairs. Three years later, the king had this city expanded and added more city moats.

A Thon Buri map believed to have been produced by Burmese spies during King Bodawpaya's reign (1782-1819) for presentation to certain Burmese royals or bureaucrats depicts a medium-sized city with a big river running through it. On the right bank of the river lies a palace surrounded by walls and a number of cannons. Thon Buri Palace had 21 gates -- two entrances in the south with many cannons outside; three entrances in the north with a number of cannons; eight gates in the east by the Chao Phraya River; and eight gates in the west. In the water, there are boats and water animals. Along the river are many floating houses and other buildings. Interestingly, this map also contains the names of the places, such as the residence of Chao Phraya Chakri, who would become the first king of the Chakri Dynasty.

In 2015, ruins of a section of the Thon Buri city's brick wall were coincidentally found in Klong Ban Khamin near Bangkok Noi Canal by city workers who were improving the landscape of the small canal. The discovery led to the Fine Arts Department's archaeological excavation in the same year.

"We found the structure had been intentionally built in the middle of Klong Ban Khamin. It looked like a watergate or control unit. Later in 2016, we excavated the city moat to the south in Klong Ban Khamin and found a 8.4m by 11m structure believed to be the southern part of the city wall. In the middle of the canal, we found wooden poles and bricks in two sizes. Some of the bricks looked like stairs," Sittichai Pooddee, an archaeologist under the department's Office of Archaeology, recalled.

The team concluded that the discovered structure was likely to belong to the watergate for Klong Ban Khamin which was Thon Buri's city moat. Alternatively, it might have been a fortress matching the cannon symbol mentioned by the Burmese spies' Thon Buri map.

Assist Prof Kannika Sutheeratanaphirom, lecturer of Silpakorn University's Faculty of Archaeology who has worked with the excavation team, said over 30 archaeological sites related to Thon Buri have been so far excavated, including those at Wichai Prasit Fort, the Thon Buri Railway Station-turned-Siriraj Sthanbimuk Museum, the Thon Buri city moat, and ruins of the old fort at Museum Siam and Rajini School near Pak Klong Talat on the east side of the river.

According to the academic, the archaeological excavations, led by Acharn Pathomruek Ketudat, began in 1994. Those at Wichai Prasit Fort near the former palace of King Taksin the Great in 1997 found the fort was constructed without the use of logs as foundation. Meanwhile, the other fort at the Museum Siam and Rajini School was built of bricks and mortar with the use of logs as pillars and foundation. Porcelains dating to the late Ayutthaya period were also unearthed.

Historical documents say that the construction of Thon Buri City was started after 1767 with a military camp being built of wood and the city moat being dug and the soil being piled as battlements. The city was built of bricks which had been dismantled and brought from the old Phra Pradaeng town, and old Burmese camps at Pho Sam Ton, Si Kook and Bang Sai, Ayutthaya. During the Thon Buri period, Wichai Prasit Fort was still in use.

The previous excavation of the city moat found two stretches of brick ruins -- the first was 1.5m wide and believed to be the city wall and the second might have been a marker to demarcate the city moat. Wooden pillars, pieces of wood and fruit seeds were also found in the canal. The archaeologists believed the city moat was 10m x 11m wide.

The excavation at the 33 rai (53,000m²) site of the former Thon Buri Railway Station found a 24m-long wooden boat dating to the early Rattanakosin period and almost 100 huge logs below the site. Many pots, Chinese porcelains, ceramic roof tiles and wooden poles as well as a few elephant bones were also unearthed. The Chinese blue and white porcelain dates to the late Ayutthaya period. This area was believed to serve as a fortress during the Thon Buri period and as Wang Lang (Rear Palace) during the early Rattanakosin period. Wang Lang was the palace of Prince Anurak Deves, a nephew of King Rama I who later became third in line to the throne and was bestowed with the title Krom Phra Rajawang Bovorn Sthanbimuk. The name Wang Lang is still used for a popular street market and a river pier in this neighbourhood.

History buffs and culture lovers may want to visit these archaeological sites. However, the sites of the city moat and watergate are inaccessible while only some other sites, such as Siriraj Sthanbimuk Museum and Museum Siam, are open to the general public. Wichai Prasit Fort can be either seen from the Pak Klong Talat area on the east bank or visited if permitted by the Navy. 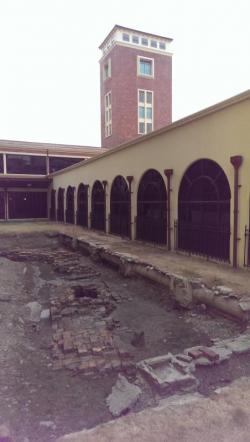 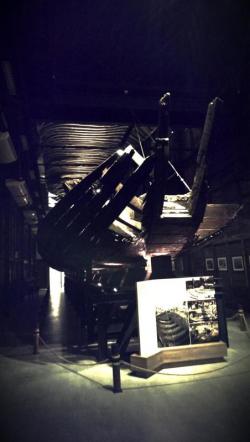 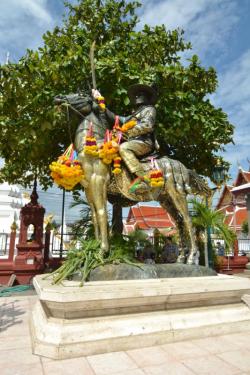 The statue of King Taksin the Great at Wat Intharam. Pichaya Svasti 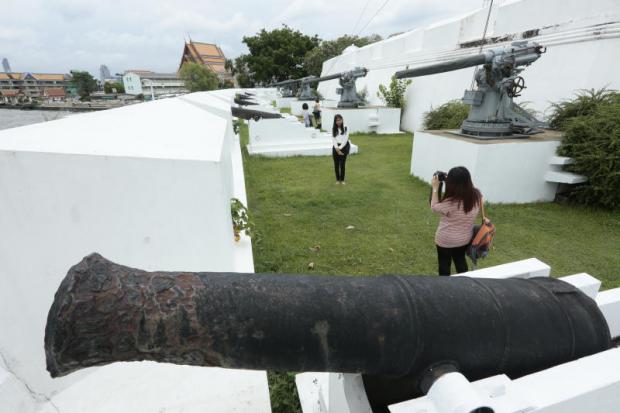