Animal trainers work for THE Sultan

Chawallak Sathansap, 46, worked at Safari World for 20 years before moving to Brunei to head up the team of 10 Thais at the Sultan's zoo. (Photos by Team Trainer Thailand)

A Thai team of animal trainers at the private zoo of the Sultan of Brunei have made a name for themselves as well as for their home country and are happy and proud of their job there.

Chawallak Sathansap, 46, is part of a team of 10 Thai trainers who teach and take care of animals at the private zoo where she handles tigers belonging to the Queen Consort of Brunei while her husband looks after birds.

Having worked at the zoo for seven years now, they receive a monthly salary of 70,000 baht each, plus other benefits and perks equivalent to those of a government official in Brunei.

"Working as a trainer of tigers owned by the Queen is an honour and pride of my life. I do the work to the best of my ability in return for the kindness and trust of the Sultan and the Queen,'' she said.

Ms Chawallak said that when distinguished guests visit the zoo, the Sultan and the Queen often praised the Thai trainers and give them credit for the good job they have done.

She said she previously worked at Safari World in Bangkok for about 20 years.

At the time, a Malaysian who headed a team of tiger trainers at Safari World was invited by the Brunei government to discuss a plan to set up a zoo there.

Her husband, Thanakorn Pornsipprapas, also an animal trainer at Safari World, gave the Malaysian head trainer a picture of his wife bottle-feeding a tiger cub. The picture was shown at the meeting in Brunei. Soon after, she was offered a job at the Sultan's private zoo. 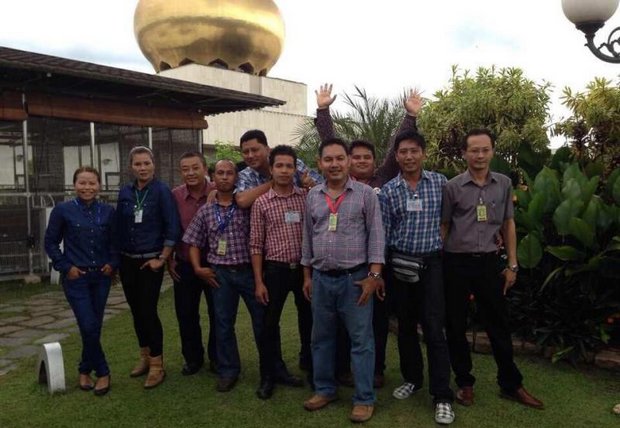 Chief animal trainer Chawallak is second from left, while her husband and chief bird trainer Thanakorn Pornsipprapas is in the foreground, fourth from the right.

After going through necessary procedures to obtain permission from the Department of Employment, Ms Chawallak, her elder sister and her brother-in-law flew to Brunei in 2011 where they became the first group of Thai trainers to work at the zoo.

Ms Chawallak said the Bengal tigers are the Queen of Brunei's favourites. Originally, there were only nine but after a successful breeding programme there are now 30.

She said she has taken care of the tigers since they were cubs and the bond between her and the animals is strong.

She begins her daily routine by preparing and giving food to them and cleaning their cage, followed by afternoon training and play time.

When foreign dignitaries have an audience with the Sultan, they are also often invited to see the animal shows at the zoo.

Ms Chawallak says that guests are amazed by the close bond between the tigers and their trainers.

Mr Thanakorn, 43, head of a Thai team of bird trainers, said that there are many kinds of birds including falcons, flamingos and cockatoos. They are trained to play basketball, ride bicycles, sing, talk and imitate the sounds of other animals.

"I am proud of my work here. During the shows, the guests hold out and shake hands with us, which I highly appreciate. Often, the Sultan and the Queen asked about our welfare, which makes us feel happy," Mr Thanakorn said.

The income the Thai trainers earn is enough for their families to live a happy life, he said.