Hubba co-working space on Ekamai Soi 4 is one of the local pioneers in the segment. PHRAKRIT JUNTAWONG

The market for co-working space in Thailand is growing quickly, estimated to increase by 25% this year, driven by both local and international players.

"The market for co-working space is driven by demand from new generations," he said. "They want a place to work that is easy to reach at an affordable cost."

According to Colliers, co-working space began locally in 2012, pioneered by Thai operator Hubba in the Ekamai area.

The sea change was sparked when people living on Bangkok's outskirts were unable to commute to work because of the massive floods in 2011.

But that space still accounts for just 1-2% of total office supply, now at 8.8 million sq m.

The new supply will be from four international operators, including two each from Singapore and the US. Singapore's JustCo has a joint venture with local developer Sansiri to open four locations, with the first two at AIA Sathorn and All Seasons Place with 3,000 sq m each -- both to be offered to Sansiri customers free of charge -- and two other locations yet to be disclosed.

From Singapore, The Great Room will open at Gaysorn Tower and Sindhorn Tower.

From the US, WeWork is set to enter the Bangkok market by launching 3,200 sq m of space at Asia Centre Sathorn in September and 3,000 sq m at True Digital Park near Sukhumvit Soi 101/1.

There are also two big local players, Glowfish and Hubba. The latter is opening four new sites and is seeking partners to expand co-working space in shopping centres and office buildings.

The market has also expanded to provinces like Chiang Mai, Phuket and Songkhla. These destinations have become a hub for foreign travellers in need of a space to do business.

Co-working space is not yet projected to rival office landlords, Mr Phattarachai said, but the latter should be aware that co-working space expansion may affect business in the long run.

Many office landlords abroad have added co-working spaces to their buildings to serve the needs of existing tenants, he said.

"Despite higher costs and longer periods needed to turn a profit, those factors will draw target users like freelancers and startups that want to work and build business connections," he said.

Co-working space should have a specific concept for specific users like those in the workshop, design or fintech fields. This will also create loyalty among users.

"Promoting activities through social networks is a must for marketing and building brand awareness," Mr Phattarachai said.

Roongrat Veeraparkkaroon, director of the advisory and transaction services office at property consultant CBRE Thailand, said regional and international operators are set to open their first locations in Thailand this year.

"Landlords now want to offer a variety of space to their tenants, while more tenants are considering renting co-working space because it is more flexible and saves on costs, as they don't have to pay for the fit-out," she said.

But the competition will be more intense and local operators will need to adjust to vie with the big players, Ms Roongrat said. 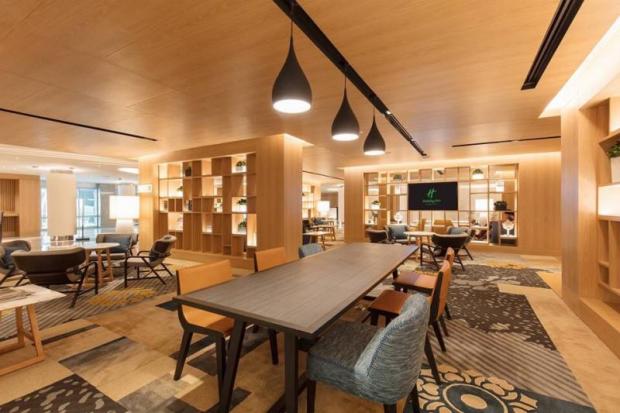 Holiday Inn has added a co-working space to attract a younger clientele.

She said there is a range of demand from both startups and larger corporations. Some companies, especially in the tech world, want the ability to expand quickly without long lead times in fitting out their own spaces or the burden of lease commitments when they are still unsure of future space requirements.

Starting in 2018, big regional and international players will open their first locations in Thailand. More international brands are also interested in coming.

Ms Roongrat said local operators should provide a variety of facilities and amenities. For example, Glowfish provides a fitness centre and cafe.

The spaces should also offer a greater variety of business services on top of additional fees such as company registration, accounting and translation services.

She said creating the right community and work environment is key because people today want choice, both in terms of comfort and networking opportunities.

"Co-working is about the people and about the space, how they connect to and build the community," Ms Roongrat said. "A great co-working space not only has a different working environment, from open community tables to smaller, quaint and more private areas, but also provides great networking events for tenants and members, who can then choose who they want to connect with and when they want to connect. It's all about choice."

She said co-working has proved successful for those operators with an established network and a strong sales and marketing platform.

Some landlords in other countries have started to operate and offer co-working spaces in direct response to their tenants' demand for fitted, furnished and flexible spaces.

Some clients will prefer a big-brand regional operator with a solid track record and multiple locations, so that a company can agree on wholesale rates in multiple locations rather than deal with individual landlords in different spots.

"For retail landlords, co-working space can draw traffic to shopping centres, which are now being challenged by e-commerce," she said. 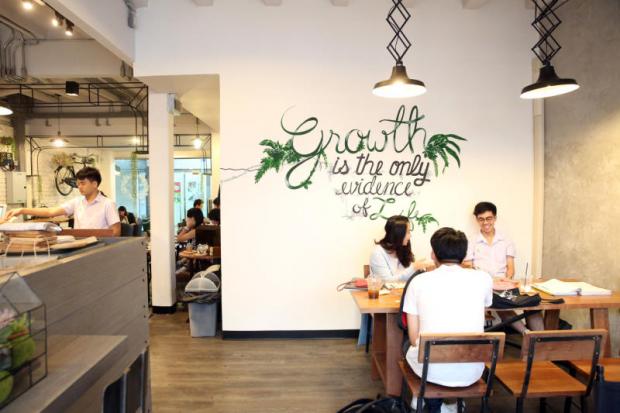 Growth cafe in the Siam Square area is one of many co-working spaces showing the versatility needed to attract millennial clients.  WEERAWONG WONGPREEDEE

To be successful in the co-working space business, office landlords should improve their designs to attract target users, Mrs Suphin said, adding that they might consider subsidising rent.

Meanwhile, operators should create activities or hold small seminars with attractive topics presented by renowned specialists to attract users who have similar interests.

Mrs Suphin said co-working space users are no longer just startups or freelancers, but also include large corporations that want their staff to share or get ideas from the broader community of users.

"A co-working space should be easy to access, have good infrastructure with an appealing design and provide both public and private space," Mrs Suphin said.

As demand originally emerged to cater to SMEs, startups, freelancers and mobile workers, most of the co-working spaces in Bangkok are located in stand-alone buildings, shophouses, and retail and community malls, and they are owned and operated by Thai entrepreneurs, said Yupa Sathienpabayut, director of office leasing at JLL.

Only a handful of co-working space providers operate in office buildings. Some examples are local players such as Glowfish at Asoke Towers and Sathorn Thani; Draft Board at Orakarn Building on Chidlom Road; Meticulous Offices at SSP Tower on Ekamai Road; and Kloud at Flourish Building on Ratchada Soi 18.

But this trend is changing.

In response to success in other cities around the region and driven by growing demand from corporate users, more overseas co-working space providers are setting up shop in Bangkok. These operators offer large facilities, occupying 3,000 sq m of space on average, in prime office buildings.

While some of these existing operators have an aggressive expansion plan, there are more co-working brands looking for opportunities to enter Bangkok. Most of them are from Asia, including Japan, Hong Kong and Malaysia, which are likewise looking for 2,000-3,000 sq m of space in prime office buildings.

Unlike the smaller pioneers that target startups and freelancers, these large co-working space providers focus on corporate users. They can tailor co-working space to be more like serviced offices, functioning as a home for small- to medium-sized firms, or provide satellite offices for large corporations.

While these spaces provide some privacy and, to a certain extent, accommodate the tenant's brand identity requirements, their shared facilities and creative design still allow for interactions with other tenants.

Co-working offers a social environment that encourages interactions and knowledge sharing. This is well in line with the changing lifestyle of workers and corporate cultures in the emerging digital economy.

Companies consider co-working space as an alternative workplace option, not only because of the collaborative environment, but also for flexibility.

In response to success stories from other office markets around the region, some Thai developers and owners have shown an interest in adding co-working space as a component of their office buildings.

But as operating co-working space requires special expertise, these developers are more interested in forming joint ventures with experienced co-working brands than operating the facilities on their own.

This is different from 3-4 years ago, when no office building owner was keen to consider an opportunity to enter a joint venture agreement with co-working operators.

"There is a leading Thai developer in negotiations with a foreign co-working space operator for a joint venture opportunity," Mrs Suphin said without naming names.

Gavin Vongkusolkit, managing director of Heritage Estates Co, the operator of Glowfish co-working space, said the players in the segment are mostly in a different industry. He said local providers will have no chance against large, well-funded competitors if they are competing in the same arena.

"Glowfish will focus on culture and purpose," he said. "Several strategies will allow it to overcome its better-funded competitors, whose sole goal is to grow to sell off their business. The right culture and purpose, however, can make local players very competitive."

Glowfish also believes in putting more emphasis on the word "co-working" rather than the word "space" to succeed in the industry.

Mr Gavin said co-working space in Thailand caters to creative people who are looking for inspiration.

"A more significant part is the 'weight' of doing business in today's too-fast and too-disruptive business environment," he said. "More and more companies will have to move faster, and they will need to outsource or get rid of the non-essential part of their business to focus on what really matters -- like reducing weight to make something fly or fly for longer. An office or a working space is one of the first and easiest things to outsource for anyone."

Noelle Coak, Regus's country head for Thailand, Taiwan and Korea, said co-working spaces have emerged as the definitive environment for startups, entrepreneurs and those who think outside of the box, to not only work but to bring people together and build a real community.

"Most startup employees and entrepreneurs are millennials and are accustomed to being connected all of the time," she said, "so it's no surprise that they are increasingly looking for more inspiring options when working, such as business lounges, co-working spaces, short-term offices or drop-in centres.

"Worker demand is changing, and it's up to Thai businesses to evolve with their changing workforce."

Regus is opening a space at the Chiang Mai Icon Park Hotel on Maneenopparat Road in June and will open another venue in Bangkok at the Singha Complex in August. The Regus business centre opened its doors at Bitec's Bhiraj Tower last month.