Journey to the top

On the surface, Chanon Santinatornkul may pass as a cliché teen idol molded with just the right degree of charisma and looks to fit in the showbiz world. But beneath the exterior lies an actor who is deeply passionate about acting. At only 22 years of age and having already experienced success in television and film, the star, whose role in Chalat Gaem Goeng (Bad Genius) propelled him to international stardom, is taking another step towards a career goal. Now that he's packing up and leaving Bangkok to film a TV series in China for a few months, Chanon's list of achievements seems only set to grow.

Often known as "Nonkul", a combination of his nickname and the last syllable of his family name, the actor shot to fame with the leading role in the arthouse short film Patcha is Sexy, followed by minor TV appearances, for instance the third season of popular teen drama Hormones, Bang Rak Soi 9/1 and Shoot! I Love You. But it wasn't until last year that his stardom was cemented and he earned acclaim and swept up awards for his role in the blockbuster hit Bad Genius, produced by the studio GDH-559.

"The movie was definitely a defining point in my career," says the brainiac of the Bad Genius quartet. "My path as an actor wouldn't be as clear as it is today had I hadn't taken part in the movie."

Bad Genius, a thrilling caper which follows a group of high-school students who devise a sophisticated exam cheating scheme for profit, topped the box office in Cambodia, Malaysia and the Philippines, while also a major hit in South Korea, Taiwan and China (it opened at no. 2 at the Chinese box office, a mean feat). The movie has made 112 million in Thailand alone -- the highest-grossing film in 2017 -- plus more than $42 million worldwide, making it the highest-grossing Thai movie on an international scale. 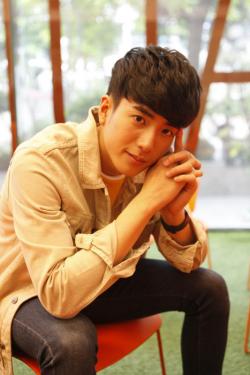 "I can only speculate on why they chose me for the role [in Bad Genius], but I had a feeling it had something to do with the way I played the pi scene," he says jokingly, referring to the episode where his genius character Bank gave the correct answer for the multi-decimal value of pi at a maths contest within seconds. "On a serious note, though, I think the way I sympathised with the character allowed me to portray him a little more unapologetically, despite all the bad decisions he made throughout the story."

A career in showbiz isn't something Nonkul was planning on exactly. Yet, it soon became his passion and now his whole life.

"I still find it amazing that I get to make a living doing something I love most in life, and I am thankful for every moment of it. I guess acting just grew on me naturally after the work I landed and I put in huge effort which was met with praise and commercial success. The interaction between people I work with also cracked me out of my former introvert shell. I >> >> find the emotional presence required for each of the roles very alluring," he reveals.

Nonkul recalled the first day he set his foot on the entertainment industry's threshold. "I was in Siam Square when a magazine crew approached me saying they would like to have my photo on a small column on their back cover. I was just a nerdy-looking guy wearing an oversized t-shirt, cropped pants, a cap and a pair of slip-on shoes," he laughs.

He was ungroomed and geeky-looking, and a big fan of manga. Nonkul said he would spend up to six hours in a row reading manga, or sketching cartoons in his room.

"My original dream was to become a manga illustrator. Back in the day I could just sit there and nerd out on my sketch book for hours. But then acting came around, so that career choice was downplayed.

"I also dreamed of becoming a professional American football player but was barred by my family who were concerned about the physical health issues the sport may entail," he Still, American football holds a special place in my heart, partly because I enjoy the game and also because I couldn't forget the moment when I scored my first touchdown. It was such a pivotal, emotional moment for a wimpy young boy like me who had never achieved anything athletic in his life," he says, recalling the days when he was an exchange high-school student in Texas.

A comfort zone is a nice place to visit, but the actor wouldn't want to stay there for too long. His plan for future is singular and simple. For Nonkul, his goal was set right after his role in Bad Genius.

"I've set Hollywood as my career goal since day 1. If you ask me what I want out of my career, I'd say that the one thing I want the most is to reach Hollywood," says the actor firmly.

"Maybe it's just a daydream, or maybe not. I live with that belief every day -- something that always drives me. And it is this very belief that had pushed me this far, and will make me continue to pursue my dream. As time has passed, I can sense the performance I deliver starts to reflect the person I want to become."

Even now he has laid down the groundwork for an acting career, it's always all-in for Nonkul when it comes to self-development. The desire to completely immerse himself in the life of an entertainer is evident from the get-go.

"I have never felt like quitting, not even once. But I do admit that the business has introduced me to never-ending greed. I always reach out for something bigger and more challenging," he confesses, "Opportunity is likely to knock on the door of those who are ready. These days just being good at acting won't get you that far; you've got to be a well-rounded entertainer. And for that reason, I started to take singing, dancing and language classes as well."

After the success of Bad Genius, Nonkul has found surprise stardom in China and maintains a loyal following there. He is now looking to step up the game with a role in a Chinese television series, set for filming during over the next few months.

"After Bad Genius opened big in China, I went on a tour to attend award ceremonies and did some magazine photoshoots in the country. As a Thai actor, being able to stand among other famous Asian stars was really meaningful for me, and now learning Chinese has become my new obsession."

"My typical day can be very mundane. I don't have a lot of spare time, but when I do, I'm usually going to fitness, class and work," says the actor, who also has deals with various companies to promote their products. A handful of ads and television stints in his home country will enable him to travel back and forth between Thailand and China over the next few months.

Studying film production as his major, Nonkul said he chose this field because he wants to develop his acting skills from the filmmakers' point of view.

"When I was looking for a university four years ago, I came across a brochure at the university, saying the curriculum offers students a field trip to Hollywood. So, there I went."

"I had a chance to visit Chapman University, one of the top 10 universities in the film production area in the world and learned a whole lot of things from that.

"I am typically drawn to action films with neat choreography in action scenes. There are a lot roles out there that I'm excited to tap into, like that of a Kingsman-like spy. Growing up, Robert Downey Jr and Daniel Day-Lewis were two of my favourite actors who shaped my outlook in acting. I truly hope I can work with them one day."

The actor's hunky physique is a result of a strict workout regime, which is a big part of his self-development programme. Apart from helping propel him on an international career path, Nonkul also wants to grow taller. To elevate his height, the young actor forced himself to go to bed before 9pm, drink at least one litre of milk every day and do bunny hops on a daily basis for a course of three months. The Journey to 190 cm strategy was recorded and uploaded on his YouTube channel and managed to inspire many peopl worldwide.

"I know it sounds crazy when I said my goal was to reach the height of 190 cm, but I believed it was possible and it will boost my confidence and give me more opportunities in work.

"I discovered an article about how people can grow taller even after the age of 21, so I decided to give it a go. And that's how Journey to 190 cm came about."

"Although the result isn't exactly as I had hoped, it still feels good that at least I tried to change something for the better. After all, the old catch phrase 'no pain, no gain' was coined for a reason." 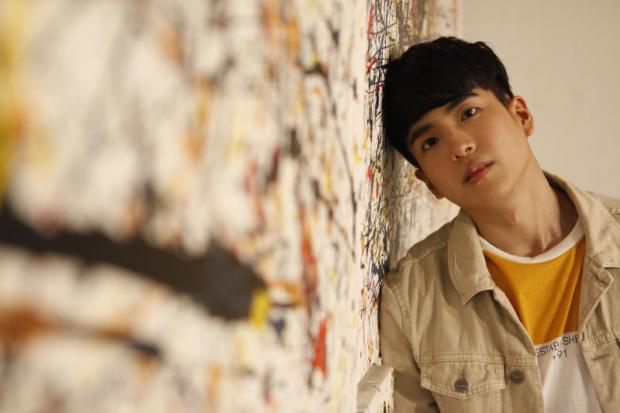