The fight for basic rights

Rohingya migrants on a boat adrift in waters off Ko Lipe in 2015. Photo: AFP

Human-rights violations in Southeast Asia remain a sad sight in the news. Among the various organisations working to improve the situation, Fortify Rights since 2013 has been hard at work with its team of human-rights specialists in Thailand, Myanmar and Malaysia to bring changes to the region. 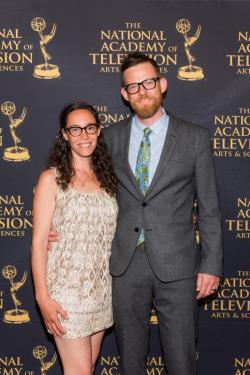 Amy and Matthew Smith of Fortify Rights in New York at the Emmy Awards, where they were nominated for Behind The Fence, a film they helped produce on the Rohingya. Photo: Marc Bryan-Brown

Lately concentrating its work on the plight of the Rohingya, organisation founders Matthew and Amy Smith have been honoured with the 2018 Roger E. Joseph Prize. Past recipients include the likes of African-American civil rights activist Rosa Parks, Henry Louis Gates Jr, Raoul Wallenberg and others.

"Our team was really honoured to receive this prestigious award," said Matthew. "We're witnessing mass atrocities unfold in Myanmar, and the Joseph Prize is a call to action. It sends a loud message to perpetrators."

Amy continued: "This award is a meaningful recognition of the gravity of the situation for the Rohingya and the deep concern within the international community for their well-being."

In an interview with Life, the Smiths share their take on an array of issues pertaining to their work and how they cope with the pressure of their job.

What have been some of the key points of your work in the past few years?

Matthew: Last year, we worked with Rohingya communities, Myanmar civil society, and international organisations to help persuade UN member states to create an independent, international investigation into the mass atrocity crimes against Rohingya, Kachin and other ethnic communities in Myanmar. Diverse civil-society groups in Myanmar spoke with one voice and we helped Rohingya travel to the halls of power in Geneva and Washington to demand action. The US co-sponsored a resolution that the Human Rights Council passed in March 2017, creating an independent fact-finding mission. The mission is due to finalise its investigation in September this year.

Amy: Thailand's mass human-trafficking trial and last years' conviction of more than 60 human traffickers involved in trafficking Rohingya refugees was a momentous event for our team.

We spent several years investigating and documenting the trafficking of tens of thousands of Rohingya to Malaysia via Thailand. We worked with survivors to document how traffickers held them captive on boats at gunpoint, confined them to remote trafficking camps in the jungle, and eventually sold them to the highest bidder. We testified before the US Congress and shared information with senior Thai officials, encouraging them to act. In April 2015, we shared the information we had about mass graves on the Thai-Malaysian border with Thai officials, and Thai officials did the right thing.

You were at the Emmy Awards. How did human-rights work and a television award show come together?

Amy: We had the surreal experience of attending the 2017 News and Documentary Emmy Awards in New York City after a virtual-reality film that we helped produce received a nomination. The film, Behind The Fence, highlights the protracted internment of displaced Rohingya in squalid camps in Myanmar's Rakhine State. The Myanmar authorities forced Rohingya into these camps in 2012, and more than 125,000 remain there today, closed off from access to adequate food supplies, health services and other basic needs. The film helps show people what daily life is like for Rohingya living in these camps.

What are some of the most challenging cases you both have worked on thus far?

Matthew: The situation facing the Rohingya in Myanmar is the most difficult I've ever seen. The worst part is that it didn't happen overnight. For years, we warned about the risk of more mass atrocities.

Amy: Our team in Thailand has been working with community-based environmental defenders in Thailand for several years now.

These environmental defenders have been under attack for too long and in so many different ways because of their activism. They've faced physical attacks, attacks through the court system, and attacks on their environment. We've documented killings, disappearances and the arbitrary detention of environmental defenders. Despite the seriousness of these violations, these cases receive little of the attention, alarm and action that they deserve. Even today, cases against environmental defenders are pending in Thai courts cases that violate human rights, that should never have been brought and should be dropped.

How do you deal with the pressure and stress?

Amy: We recognise that human-rights work can take a serious mental toll with long-term effects. To mitigate that toll on our team, we try to foster a positive, supportive and healthy team environment. Human-rights work is demanding and often takes place in challenging contexts, making time off and flexible work options all the more important, so we've instituted a generous leave policy and remote working options. We've also dedicated resources for a trained mental-health counsellor to work with our team to educate us on the effects of this work, building resiliency, and finding resources for support. This sort of support is something that we'd like to eventually extend to the human-rights leaders and our civil society partners.

Matthew: There's an increasing body of research documenting the ways human-rights work can have a serious impact on mental and physical health. Self-care and team-care are critical. In some places, we're documenting the worst imaginable human behaviour, from massacres to mass rape, and over time that can affect our bodies and brains in non-trivial ways. We're always looking for new ways to promote healthy responses to the stress of this work.