Caught in the moment: A snapshot of dancers performing traditional 'khon' dance in front of the Schlosstheater Schonbrunn in Austria last month. The Ministry of Foreign Affairs and the Ministry of Culture joined hands to promote a Thai cultural roadshow in European countries. The programme's highlight is khon dance but it also includes other artforms such as mask making and cloth weaving. The project is supported by the Queen. Photos: APINYA WIPATAYOTIN

The month-long journey of the Thai cultural caravan across Europe has come to its final stop. Its mission, aptly named "Thailand at the forefront", is part of the country's efforts to promote its culture abroad through performances such as the masked art of the khon dance.

The caravan has received full backing from the royal family and its journey thus far has proved to be a strong diplomatic victory by means of showcasing the country's rich culture on a global scale.

Performances of the roadshow have taken place in front of audiences in strategic venues like the Circulo de Bellas Artes in Spain and the Schlosstheater Schonbrunn in Vienna's Schonbrunn Palace. The Ministry of Foreign Affairs has been running "Thailand at the forefront" since 2015 when it was inaugurated at the Royal Albert Hall in London to mark the 60th birthday of Royal Princess Sirindhorn.

The programme saw a return to action at the Carnegie Hall in New York and the Sydney Opera House in 2016 to celebrate the 84th birthday of Queen Sirikit. A special performance was also held at the Mariinsky Theatre in Saint Petersburg to commemorate 150 years of diplomatic relations between Russia and Thailand.

Ruyaporn Sukontasap, deputy director-general of the Department of Information at the Ministry of Foreign Affairs said their office has been working closely with the Ministry of Culture for several years to prepare the show. This includes booking the venue in each country where performances were scheduled. The ministry holds venue selection in high regard so as to set a good impression of Thailand abroad.

"What we have done with these performances is to create a good impression of the country," said Ms Ruyaporn. "It is a kind of soft policy that generates interest in Thai culture which subsequently benefits our tourism industry." 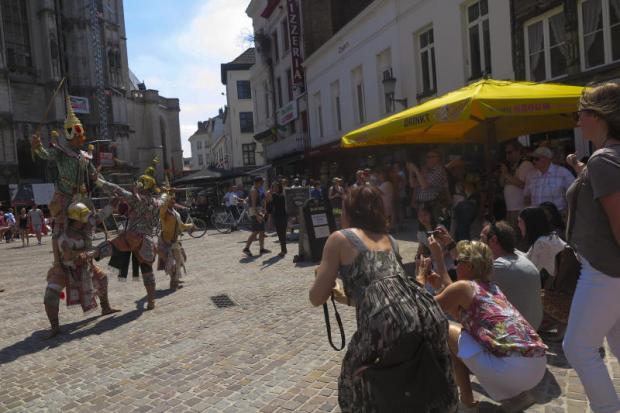 That's a wrap: Residents of Antwerp, right, enjoying the cultural roadshow. The Belgian city was the last stop on a one-month European tour promoting Thailand to foreigners.

The Thai cultural caravan started its trip in Italy and slowly made its way through Portugal, Spain, Austria, Germany and Belgium. Performers are comprised of 32 staff from the Department of Fine Arts and a team of Thai-fined art demonstrators who are from the Foundation of the Promotion of Supplementary Occupations and Related Techniques of Her Majesty Queen Sirikit of Thailand.

The show's leader, Lasit Isarangkura, from the Office of Performing Arts, said the khon dance performance is the first item on show during a performance. However, the challenging task is how to modify the khon so that it is suitable for international audiences while still maintaining its key theme of virtue conquering evil. Speaking about feedback on the show so far, Mr Lasit said audiences seem to be happy as the performance is something most people have never seen before. More importantly, it's also a good opportunity for young Thais to learn and better understand Thai culture and be proud of being Thai.

Wantanee Moungboon, stage director, said that all performers will need to take part in more than one show due to limited staff. While performances are carried out in different circumstances, it must be done with maximum practice. It means that all performers must maintain a high skill level from start to finish.

The show starts with the khon -- traditional Thai classical masked dance based on the Ramayana epic. It covers the beginnings of Thotsakan and Rama, their fighting and the victory of Rama in the end. This is followed by regional dances and combat dances of Thailand.

Anucha Surnaman, an official from the Department of Fine Arts who plays the role of Thotsakan or the great demon of Longka city, said the khon performance is attractive because viewers not only see Thai classical dancing but also wonderful Thai handicrafts of costumes and musical instruments.

He added his team had received positive feedback from audiences saying that even if they don't understand Thai culture completely, they are happy with the show, which he regards as a success. All costume and jewellery used in the show is made from craftsmen working for the Queen's foundation.

Promate Boonyachod, of the foundation, said making the khon a success requires advanced crafting skills that must follow traditional Thai style (for the jewellery, masks and embroidery), and some of these skills are so rare they have almost disappeared.

Mr Boonyachod said the cloth for khon was previously made in India. However, the Queen decided more Thais would benefit from being able to do it themselves, so encouraged them to embroider the silk brocade (phayok), part of the process for making clothing for khon dance, themselves.

"Queen Sirikit's kindness to khon doesn't bring benefits only to Thai culture but also to the poor and young generation. They have been trained in traditional Thai art for the benefit of the country's heritage and as a means to make a living," he said. A demonstration of the mask-making and cloth embroidery was also arranged for audiences so foreigners could see and learn how to make it themselves.

Songsak Saicheua, ambassador to Austria, said the cultural roadshow is an important event to highlight Thai culture. It paves the way for further cooperation especially with Austria as the two countries are set to mark 150 years of diplomatic relations next year.

Regarding cultural cooperation, he said an musical-exchange student programme is often undertaken between Mahidol University and the University of Music and Performing Arts. More collaborations will be announced in the coming year such as startup cooperation, smart-city development, and investment in the Eastern Economic Corridor.

He also hopes the number of tourists from Austria visiting Thailand will double to 130,000 thanks to the newly introduced Vienna to Bangkok direct flight.

Meanwhile, Yaowaman Sasho, one of fthe ounders of Kor Kai Thai Language School in Germany's Dusseldorf, said it was a great opportunity for Thai children born in Germany to see the culture of their motherland. She said it was a good idea to have small training classes for Thai traditional dance and crafts so young children can learn and experience Thai culture. 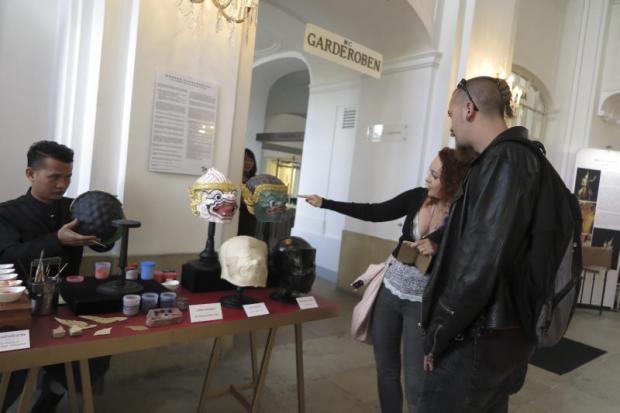 Masks on display: Traditional Thai masks, left, are displayed at a museum so audiences can see them up close and personal. For those interested in learning more, lessons in the traditional art of mask making were provided free as part of the roadshow. 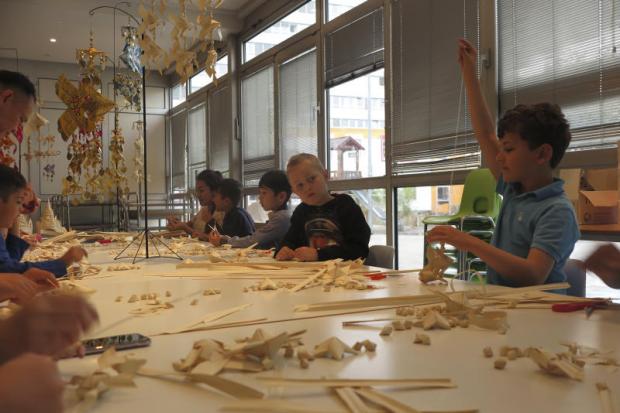 The main opposition Pheu Thai Party has urged the Election Commission (EC) to revise electioneering regulations during the 180-day period prior to the end of the House of Representatives' term to allow MPs to hand out relief items to flood victims.