Striving for safer passage of goods

this way up: Pongnarin Petchu, project adviser, gives a lecture on UN-regulated safety signs for the transportation of dangerous goods. Photos: Courtesy of GIZ

The European Union (EU) has commissioned Thailand to conduct training workshops for the transportation of dangerous goods in the Greater Mekong Subregion (GMS), as part of a move to get the entire sub-region to adopt United Nations-based safety regulations for road-based logistics operations.

While the first of the programmes was carried out in Myanmar earlier this year, the second workshops were held in Ho Chi Minh City, Vietnam on June 26-28. They were headed by the Thai branch of Germany's main international cooperation agency, the Deutsche Gesellschaft für Internationale Zusammenarbeit (GIZ).

Wilasinee Poonuchaphai, the project's co-director, said the EU-funded workshops are based on an Asean agreement signed in 1998, which has not been fully taken up among member nations.

Called the Asean Framework Agreement on the Facilitation of Goods in Transit, one of its protocols said that each of Asean's 10 countries must adopt the UN's safety regulations for the transportation of dangerous goods.

"More than 10 years after the agreement was signed, we have still yet to see significant changes in each country's road-based logistics operations," Ms Wilasinee said. "While Thailand is considered the most advanced country in the GMS for dangerous goods transport [excluding southern China], it is also in need of much development in this sector."

In February, an oil tanker truck carrying 24,000 litres of oil crashed into a pickup truck and overturned in Sara Buri, killing one 63-year-old man and resulting in several explosions and huge flames. The truck driver fled the scene. Local police suspected he fell asleep or his tyre burst.

However, the horror-inducing Bangkok gas explosion of 1990 remains the primary example of disasters related to the transportation of dangerous goods in Thailand.

A tanker truck carrying liquid petroleum gas crashed into an expressway exit on New Phetchaburi Road, with the resulting explosions leading to 90 deaths and 121 injuries. The flames burned for over 24 hours before authorities were able to douse them completely.

"There cannot be a repeat of instances like these, especially considering how cross-border trade among GMS countries is being encouraged," Ms Wilasinee said. "There must be a set safety standard enforced by all concerned countries. If one has good standards while the others don't, problems related to credibility will surely surface among the countries." 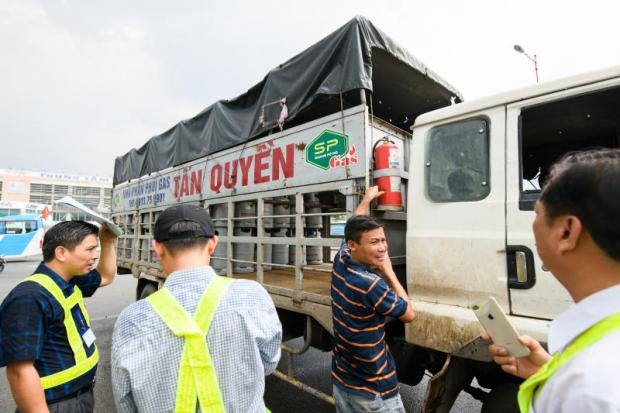 safety first: A truck carrying gas canisters is flagged down for inspection as part of the activity.

These training programmes are part of a sustainable freight and logistics development project in the Mekong region, which kicked off in June 2016. According to Ms Wilasinee, actual workshops started this year after the GIZ spent around two years translating various international agreements into each country's language and familiarising itself with local regulations.

The recent workshops in Ho Chi Minh were attended by around 20 representatives from police, logistics companies and the Vietnamese Ministry of Transport (MOT).

Nguyen Cong Bang, deputy director of the Vietnamese Transport Department, said the country enforces a mixture of domestically-regulated and UN-regulated safety signs for trucks transporting dangerous goods. According to him, the regulations are in line with international standards, but "still need some improvement to reduce risks."

The main UN-enforced document is the European Agreement concerning the International Carriage of Dangerous Goods by Road (ADR), which is a 1957 UN treaty that governs transnational transport of hazardous materials. It includes size, colour, symbol and text specifications for signs to be put on trucks that transport dangerous goods.

"The Vietnamese government is instructing ministries to draft up their own lists of dangerous goods, so that a collective official list can be made, in compliance with the ADR," Mr Bang said, adding the list is due to be completed by the end of the year.

He said chemicals and petroleum are the two most transported dangerous goods in Vietnam, meant for cross-border business with Cambodia, China and Laos. Some of the petroleum comes from Thailand, he added.

Dang Tran Hieu, deputy general director of Petrolimex Aviation, a main petroleum supplier to aircraft in Vietnam, said its hired oil tanker trucks have to be fitted with safety signs, as per their contracts with the firm. However, he said the actual signs are those regulated by the Vietnamese government, and they are "similar" to UN-regulated signs.

According to him, another issue is the amount of motorbikes running on the country's roads, which could pose a major risk if they crash into petroleum trucks or those carrying other dangerous goods.

MOT reports from 2016 state Vietnam has over 45 million registered motorbikes, making it one of the largest motorbike markets in the world.

"The government must enhance public awareness of the transportation of dangerous goods, to help all commuters understand the risks involved [with driving near such trucks]," Mr Hieu said, adding commuters should give way for trucks transporting dangerous goods instead of cutting in front of them.

Lectures were given for two days by Thai representatives, who spoke in English with the help of a Vietnamese translator. Written tests were given in the local language on both the days after lectures were complete.

Pongnarin Petchu, the project's consultant and lecturer, said the administered written test results -- scored out of 20 -- improved on the second day of the training programmes.

"The results were on average of five out of 20 when we gave them on the first day, but they were bumped up to an average of 16 on the second day," he said. "The goal is to increase awareness of UN-regulated safety signs."

A field activity was then conducted after the tests, involving checking trucks near local depots for safety signs and other violations. At least three trucks were flagged down for inspection in the space of around half an hour.

Hoang Xuan An, an officer from the Traffic Police Department who attended the training programme, said these trucks either had insufficient signs on them or sub-standard safety equipment, such as faulty fire extinguishers or a lack of safety gloves.

According to him, traffic law states police may confiscate the driver's licence immediately. The driver then has seven days to report to a police office, where a ruling will be made in the space of these days, depending on the severity of the violations.

Fines of up to US$1,500 will then be imposed upon the driver or the owner of the firm, while the driver's licence will be suspended for 30 to a maximum of 150 days.

Mr An added termination of the driver's licence is also an option.

Mr Pongnarin said after the exercise that the results of the tests, to be conducted in the rest of the project's targeted countries, will be compiled and sent to each country's respective Transport Ministry. The workshops are set to be held in Thailand next month, where Laotian firms will also be invited to join. They will be held in Cambodia and Myanmar in September.

According to Mr Pongnarin, analyses of the compiled data will be completed by next January.