An accident waiting to happen

Serious efforts to tighten safety standards for foreign tourists scared away by the tragedy of 47 Chinese visitors killed when a boat capsized off the Phuket coastline early this month fail to ease the concerns of deputy Tourist Police Bureau chief Surachate Hakparn about a possible repeat of the tragedy. 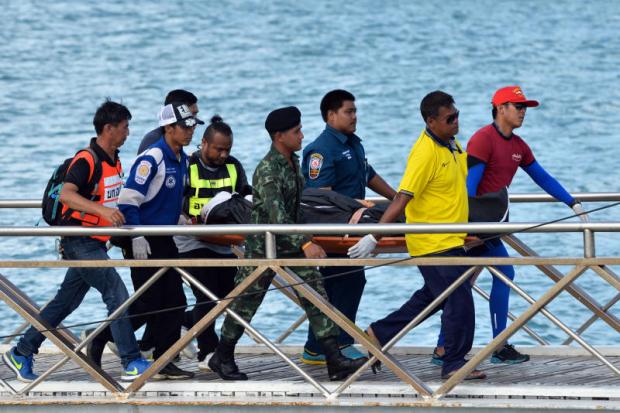 Rescue workers carry the body of a victim on a stretcher after the boat capsized. PHOTO: REUTERS

State authorities' pledge to double safety checks to regain the confidence of tourists, a major contributor to national revenue, is the right move, but "boat accidents may still occur anyway, further damaging Thailand in the future," he said, pointing the finger at reckless tour operators acting as proxies for foreign businessmen who know little, or nothing, about how to keep their clients safe during trips to the sea.

An initial investigation found between 11 and 12 tour companies in Phuket and the neighbouring tourist province of Phangnga are illegally owned by foreigners who had Thai people run the firms as a front, in violation of company ownership laws, he said.

A Thai tour guide, who is working in Phuket, backed up that argument, claiming on his Facebook page that about 80% of tour operators on the resort island belong to "Chinese businessmen and their Thai nominees."

ORDER TO SET SAIL DESPITE WARNING

This business format not only allows these foreigners to scoop up money for themselves at the expense of tourism revenue but, according to Pol Maj Gen Surachate, a profit-oriented mind may cause some to ignore safety standards. This is believed to be among factors behind the tragedy, he said.

On July 5, a dive boat, Phoenix, which was packed with 101 people on board sank in rough seas while returning to port. In the accident, 47 of the 89 mainly Chinese tourists on board were killed when the boat sank. Rescuers had to spend 11 days retrieving the bodies from the sea. The last one, pinned by the boat wreckage, was taken out on July 15 amid strong currents. On the same day, a yacht named Serenita carrying 39 passengers and two crew also capsized near Phuket. Fortunately they survived.

Two companies, now under probe as to whether they worked on behalf of Chinese investors, were implicated in the accident. TC Blue Dream Ltd is "linked to" the ill-fated Phoenix while Lazy Cat Travel is "associated with" the Serenita, according to investigators. The two boats set sail even as other operators decided to stay ashore because of bad weather. There was an "order from abroad" to have them resume services, Pol Maj Gen Surachate said. "One person gave an order despite opposition from boat divers and company staff as a monsoon was looming," he said.

Police are gathering evidence to act against the suspects. Officers have been granted warrants for the arrest of Phoenix owner Woralak Ruekchaikal, 26, who is married to Chinese national Zhang Wenhao, and the vessel's chief engineer Onchan Kanhayothi on charges of recklessness causing deaths and injuries.

In an interview with Chinese media, Mr Zhang said his wife oversees business operations while he is a diving instructor.

However, investigators are digging into the firm's background to find whether TC Blue Dream, along with Lazy Cat Travel, has connections with Tranlee Travel, which was shut down, following a bust in 2016.

The Phuket-based company ran a tourism business offering a range of services from tour boats, buses to hotels and souvenir shops. Its Chinese owner allegedly used an identity card of a dead Thai citizen in the North as his own so he could manage the firm under Thai citizenship, according to investigators.

The company's 100 million baht in assets were seized and its 10 sister companies were also closed.

What caught the attention of Pol Maj Gen Surachate most when he led officers to inspect 11 locations on July 10 were documents at TC Blue Dream which raised doubts over money transfers out of Thailand and the "temporary" structure of its office which suggested it may be illegally operated by Thai nominees.

The firm has moved after a lease contract ended, but they did not inform officials of the new workplace, Business Development Department chief Kulanee Issadisai said, adding this breaks the law.

From 2015 to this year, her department has inspected over 2,000 companies claimed to have minority foreign ownership and found nearly 300 of them have "nominee behaviour," she said.

Their businesses mostly involve tourism and real estate development and are often based in tourist destinations in Phuket, Chon Buri and Surat Thani which features Samui and Phangan resort islands.

The discovery of safety flaws in the Phoenix and the Serenita has prompted authorities to strengthen safety standards, hoping to restore confidence of foreign tourists, especially many Chinese visitors who cancelled trips to Thailand after the tragedy.

"Water could enter their rear end and the boats were not equipped with adequate drainage systems."

The Phoenix was built by Thanawat Engineering Phuket Co which allegedly runs its business without a licence, a source close to the investigation said.

Experts, who have knowledge of boat assembly, believed the Phoenix sank easily because it did not use good materials or an engine suited to sea travel.

According to investigators, an engine from a 10-wheel truck was adapted and installed in the boat, which posed a risk. The water pump was also found to be smaller than the standard requirement.

Police also accused Lazy Cat Travel of using substandard safety equipment. Their life vests were not certified by the Thai Industrial Standards Institute and their place of manufacture was falsely claimed.

A tourist database must be set up to keep track of tourists taking diving trips and surveillance cameras must be installed at ports, Phuket governor Noraphat Plodthong said.

He also planned to set up an emergency response and coordination centre to deal with possible mishaps in the future.

These measures are promising. Yet it is also important to step up crackdowns on nominees working for foreign interests, Pol Maj Gen Surachate said, believing this is a key reason behind lax safety standards.

He is worried many foreign businessmen may only want to "make profits without a thought on safety issues."

The July 5 tragedy has already dealt a blow to tourism after nervous Chinese tourists cancelled bookings for 7,300 rooms in 19 hotels in Phuket, causing a loss of over seven million baht, according to Kongkiat Khuphongsakorn, president of a southern hotel association.

Tour operators expect arrivals from China will drop further during the coming Golden Week period, starting on Oct 1, the National Day of the People's Republic of China, and running until Oct 7.

Millions of Chinese people are likely to travel abroad during the long holidays and Thailand is usually among their favourite destinations. However, in the wake of the fatal accident, at least six Chinese carriers -- Spring Airlines, China Eastern, Xiamen Airlines, Juneyao Airlines, Sichuan and China Southern -- have stopped providing services between Phuket and China.

The Tourism and Sports Ministry had expected more than 10 million Chinese tourists would visit Thailand this year, up from 9.8 million last year.

It is evident Thailand's tourism is suffering from the impact of the accident, at least in a short run. However, in the view of a local tour guide, the country may not earn as much as it hopes from tourism even if there are no sea accidents.

The guide, who complained about unlicensed Chinese tour guides hired by many companies, said it is Chinese businessmen, with their Thai nominees, who stand to get the most benefit, and because they operate in the shadows aren't too fussed about the law. Chinese entrepreneurs are the real owners of the types of companies which sell "complete tourism services" with boat and bus tours, hotels, restaurants and shopping, he said.