Falling enrolment stemming from low birthrate is hitting where it hurts

The new semester is about to begin at many universities this week. Usually, that would mean a lively buzz returning to classrooms in campuses across Thailand that had been empty over the long break.

However, this year that may not be the case because, unlike several decades ago when the birthrate was high and more students applied for places at universities, many of those classrooms may remain empty.

In fact, of the 4,100 academic programmes now offered by over 300 universities and colleges, many are struggling to fill places on their courses due to the decline in college-aged students.

According to the Council of University Presidents of Thailand (CUPT), out of 300,000 available places in its central admission system this year, only around 230,000 have been applied for.

CUPT chairman Suchatvee Suwansawat explained why he thought this was: "There are just 600,000-700,000 babies born in Thailand per year on average now, compared with 1,000,000 per year 30 years ago, so that may explain the downward trend in admissions," he said.

Thailand is facing an unprecedented demographic challenge. Its population is ageing quickly, while the birthrate continues to fall.

As a result, the number of college-aged students is expected to keep declining until 2040.

According to the United Nations, Thailand is the world's third most rapidly ageing country. The percentage of the Thai population that is 65 or older has more than doubled over the last 20 years, from 5% in 1995 to 11% in 2017.

The country's labour force meanwhile is expected to fall from 50 million today to 40 million by 2040. These trends are primarily the result of a sharp decline in fertility rates, which fell from 6.2 births per woman in the early 1960s to 1.5 in 2016.

This increase reflects the demand for a skilled workforce in a nation going through rapid development as well as the higher birthrate over the past few decades.

Currently, there are 310 higher education institutes offering bachelor's degrees and beyond. 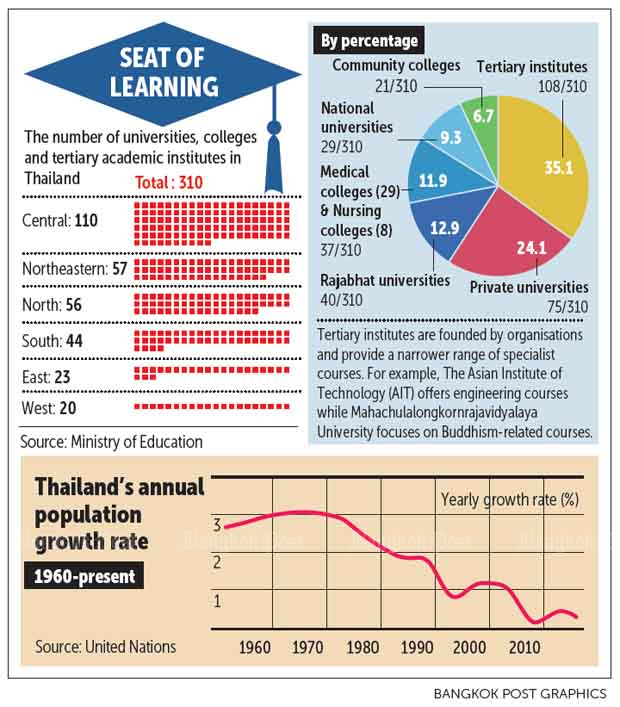 Private universities form the bulk of the sector and currently outnumber public universities and community colleges across the country combined.

Before 2010, there were around 2.5 million applicants competing for places. Last year, that figure had fallen to 2 million -- a 20% reduction in less than a decade.

PRIVATE PROVIDERS MAY BE HIT FIRST

The number of students applying for places at private universities has dropped by 50% over the past decade, a figure that is expected to halve again over the next three to five years.

Many other private universities fear they could be next if nothing is done to arrest the trend, according to Mr Suchatvee of CUPT.

Some have begun lobbying the ministry of education, asking for assistance in opening branches in neighbouring countries such as Cambodia, Laos, Myanmar and Vietnam.

Saowanee Thairungroj, rector of the University of the Thai Chamber of Commerce (UTCC), a 77-year-old private university said the universities most likely to survive are those which have backers with deep pockets because, "If you do not have well-established funding sources in the education business, it is possible that you would have to shut down or downsize".

The Association of Private Higher Education Institutions of Thailand (APHEIT) also has a bleak forecast for private universities in Thailand.

"Out of 75 private universities in Thailand, only 10 are big enough to stand on their own feet. The rest are medium or small-sized schools that need more support to survive because the higher education market in Thailand is getting smaller each year,'' Pornchai Mongkhonvanit, former president of APHEIT told the Bangkok Post.

Mr Pornchai said private universities, especially smaller ones, need to adjust their strategies in order to survive in the long run.

"Private universities should focus on the quality of students rather than quantity and some universities may need to be merged in order to stay afloat," he said.

Mr Pornchai said the drop-off in admissions will not only affect the private sector. Some state universities that just expanded their campuses and courses recently, such as Rajabhat and Rajamangala University of Technology, may find tuition fees failing to cover the debt taken on.

To survive, Ms Saowanee is urging Thai universities to collaborate more by offering double degree programmes and sharing resources and personnel, instead of just competing.

"And the collaboration should not be limited to private universities, there should also be public-private collaboration," she said.

Early this year, Chulalongkorn University (CU) and King Mongkut's Institute of Technology Ladkrabang (KMITL) signed a memorandum of understanding to provide a double bachelor's degree in artificial intelligence and robotics engineering -- the first such course in the country.

According to the agreement, engineering faculties at both universities will share resources and personnel for the programme.

Students will be awarded two degrees, from both CU and KMITL, when they graduate after spending four years studying at both campuses.

CU's rector, Bundit Euaarporn, said the cooperation agreement was a win-win situation for both universities as they can share expertise and halve their operational costs at the same time.

"Moreover, it's also a win for the government and the country because artificial intelligence and robotics engineering are fields crucial to the Thailand 4.0 vision," he said.

"We have traditionally viewed each other as competitors. I think now it's time that we change our mindset and cooperate more."

A Harvard business professor, Clayton Christensen, recently predicted in his much-credited book The Innovative University, that half of the 4,000 colleges and universities in the United States will be bankrupt within the next 10 to 15 years.

More than 500 universities and colleges in the US have been closed over the last decade.

In his book, co-authored by Henry Eyring, he predicts a gloomy future for traditional universities as online courses take over to become a more cost-effective way for students to receive an education.

Disruption will challenge traditional institutions and those failing to adapt will go out of business, he posits.

In 2016, more than 6.3 million students in the US took at least one online course and that number is expected to steadily increase over the coming years.

Deputy Education Minister Udom Kachinthorn believes that what has happened in the US' higher education sector is a wake-up call for Thai universities.

"IT companies like Google and Microsoft are offering online courses on their own. Their courses are cheaper and easier to access. Students do not have to sit in classes for four years studying many unrelated programmes to get a degree, they just need to [physically] attend short-term courses to acquire certain specific skills required by employers. This is a signal to me that the world of education is going to change forever," he said.

The concept of higher learning must be redefined too, Dr Udom insisted.

"No matter how the world turns, the original and real purpose of education is for people to become empowered by information," Dr Udom said.

"We must teach students to learn to think and to be critical. To deliver that, universities must transform themselves into learning space, not just classrooms and campuses."