Beyond the conflict
Thailand
Special Report

The multi-venue 'Re/Form/Ing Patani' exhibition, part of the Bangkok Biennial, shows life outside the headlines in Thailand's southernmost province

A garden, a public beach, two art spaces -- "Re/Form/Ing Patani" spans four different venues. This decentralised pavilion of the Bangkok Biennial could almost appear as a stand-alone event, owing to its size -- the curators invited 23 Thai and international artists to take part in the project -- and its multiple sites.

"We wanted to make sure that visitors travelling to see the pavilion could spend time exploring the venues and encounter several artworks," says Zulfadhli Hilmi Mohamad -- one of the co-curators of Re/Form/Ing Patani along with Muhammad Arafat Bin Mohamad.

Indeed, the logistics of a journey to the South of Thailand may prove to be the first obstacle for external audiences, although perhaps the main challenge artists and communities involved in the pavilion faced lies elsewhere.

"Patani is a word that often raises eyebrows," the exhibition's curatorial statement reads. "As a name, it harks back to the Kingdom of Patani -- a polity that was ruled by Malay rajas prior to its incorporation into the modernising Siam from the late 18th century onwards. The increasing usage of the word attracts suspicion, and will likely continue to do so, from some members of Thai society and beyond. This owes in part to the tendency to associate it with ideas of Malay nationalism and anti-Thai political ideologies."

Only, rather than frontally addressing the preconceived ideas or prejudices that exist surrounding life in the southernmost provinces of Thailand, the curators took a step back and invited artists -- many of whom work locally -- to reflect on the past, present and future identities of "Patani".

The ethnic diversity and cosmopolitanism of Patani, extending beyond the more commonly portrayed Muslim and Buddhist faith divide, was an important focus point that the curators wished to highlight.

"It was our conscious choice to move away from this discourse," Hilmi argues. "Some artists chose to address the violence, some wish to speak out about other topics."

Tensions between the past and the present, as local communities grow and evolve, are perhaps best illustrated in the works exhibited at Melayu Living, a creative space founded by architects. The stretched sewing threads of Korakot Sangnoy, preventing a metallic turtle from moving forward, is the first artwork visitors encounter. However, its close-ended interpretation contrasts with Jakkai Siributr's participatory work, in which the visitors -- both local community members and audiences coming from elsewhere -- are invited to embroider pieces of cloth, and convey images of their choice, many of whom have chosen to pass on messages relating to life in the southern provinces that go beyond the traditional portraiture of a conflict-ridden region. In this sense, the artist becomes an enabler who amplifies the voices and aspirations of local community members.

On Datuk beach, Nakhon Ratchasima artist Sopida Ratta invites both locals and art enthusiasts to take part in her site-specific work, consisting of textile pieces gathered from communities and tied into a fishing net. The work is destined to grow over the course of the exhibition, as audiences may continue to add more textile into the piece and the net itself will little by little catch debris from the sea. The community is ever-evolving, redefining itself, while at the same time shaped by external events and elements that affect it.

While several artists highlight different aspects of the region, beliefs, gender, violence -- a beautiful example of which is Anuwat Apimukmongkon's mural painting at Patani Artspace -- the deep involvement of the local community in the project remains the pavilion's strongest element.

Prior to the opening of the exhibition, a group of local youths held a Yogong boat race, which was not curated but stemmed from their own initiative. Divided into two teams and sporting red and yellow T-shirts, they asked for the audience to cheer for their preferred team -- an effective satire of politics and refreshing addition to the main exhibition.

While most of the artworks were displayed in dedicated art spaces -- mostly for logistical reasons, the curators argued -- Re/Form/Ing Patani has opened new doors and ways for locals of all walks of life to engage with contemporary art, as well as with each other, says Jehabdulloh Jehsorhoh, founder of the Patani Artspace and co-organiser of the pavilion.

The Melayu Living space draws its strength from it being a historical building, while the beach is of course already a public space. Pichet Piaklin's Garden Art Space was transformed into an exhibition place for the first time on this occasion. Situated in a Buddhist community, the artworks provided the opportunity for locals of other faiths and communities to cross a boundary and penetrate the place.

"Over 10 years ago, the communities were much more connected than they are today," Jehabdulloh says. However, due to increased violence and tensions over the past decade, this has faltered.

"Art provides a new platform for dialogue to continue to take place," he adds. Many local visitors coming to the Patani Artspace don't necessarily engage with the artworks at first, but they become exposed to it little by little.

"Some people only come to drink coffee. But at the same time, they are discussing and exchanging ideas -- in a context where conducting this type of exchange is delicate." 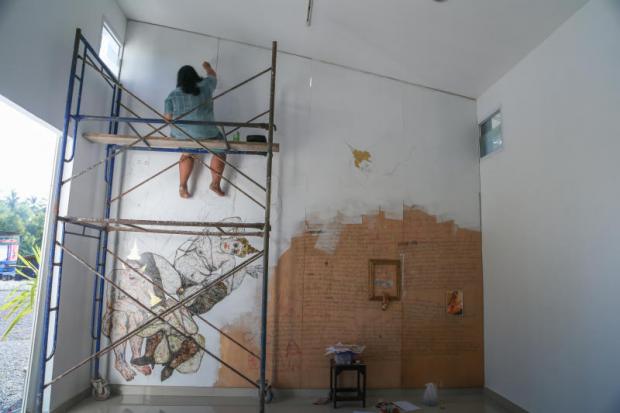 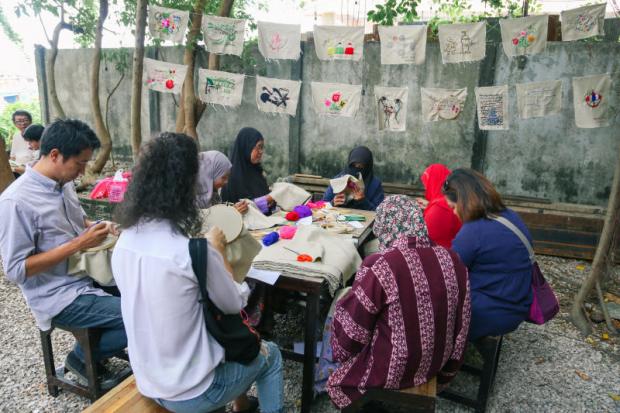 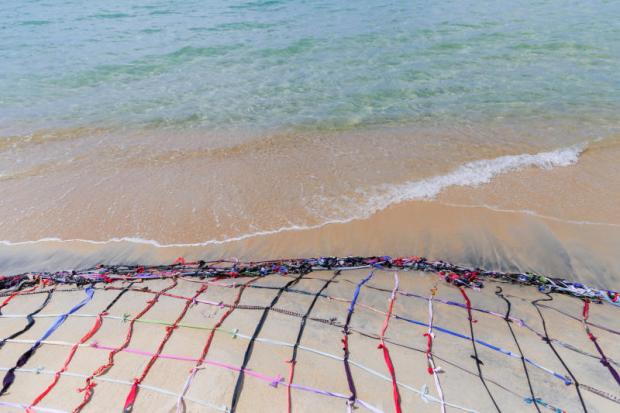