On the run with Toon again
Thailand
Special Report

On the run with Toon again

With a new film about his exploits, running rocker Artiwara 'Toon' Kongmalai is not yet done raising money for those in need

Toon Bodyslam's historic run can be relived onscreen in 2,215, which documents his Betong-Mae Sai run from last year. Photos courtesy of GDH

On Dec 25 last year, the entire nation cheered on Artiwara "Toon" Kongmalai as he crossed the finish line in Mae Sai, the northernmost district of the country. It was the completion of his much-celebrated, and much-debated, 55-day charity run to raise funds for 11 public hospitals. The "Kao Kon La Kao" project covered a distance of 2,215km, starting from the country's southern tip in Betong, Yala, and arriving up north in Mae Sai, Chiang Rai. Over 1 billion baht was raised from the run.

Now, eight months after the historic run, the experience of the national event will be relived onscreen in 2,215, a documentary film featuring never-before-seen footage from the "official" cameras that trailed the country's favourite runner every step of the way, from start to finish, including into the trailer, chronicling private moments along the way.

"It was my intention from the start to go further on this project," said Artiwara at a press conference. "I hope this film can pass on and create more good than just for people to simply come and watch it. We can help one more hospital in need."

The fundraising run has now transpired into a fundraising film, with the goal to support Siriraj Hospital, which is in need of around 1 billion baht to purchase medical equipment for its new Nawamintrabopit building that will eventually benefit underprivileged patients.

2,215 will be shown for free to the public from Sept 6-16 at Major Cineplex and SF Cinema venues across the country. Audiences can donate to the cause, in the amount they wish, instead of paying a set price for the tickets (King Power, one of Artiwara's supporters during the run, sponsors 720,000 seats at the cinemas).

"People could take some inspiration from it. Some may be inspired to go out and get healthy through exercising, to run the first kilometre in their life. Some may want to do good things for themselves and others," the rocker continued.

While he's in every frame of the film, Artiwara refused to accept that he's the phra ake (leading man).

"The real phra ake in this film is every Thai person, not me."

The rocker-runner, whose popularity has driven more people to run, also disclosed that the fundraising plan will continue for six months, with the film shown and long runs held in various places. The entire project will conclude in February. 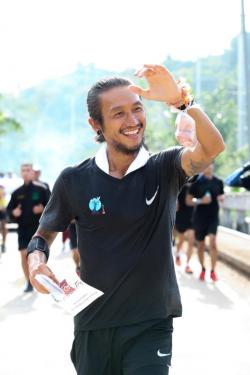 Artiwara Kongmalai, also known as Toon, the Bodyslam frontman. His historic run can be relived onscreen in 2,215, which documents his Betong-Mae Sai marathon from last year.

Artiwara's run was extensively covered at the time it took place, with all-day Facebook Live and media coverage from start to finish, and also through the countless cameras of people who cheered the runners along the route. His run became a media phenomenon, and in a way a portrait of the country. We saw the rocker jamming with local musicians, giving kids high-fives and hugging grandmothers. Sweat, tears and sentimentalism -- the making of a dramatic, uplifting movie was seen on nightly news for a month last December.

One could wonder, what else is there to see that we haven't already seen before?

The man in charge of telling the already heavily explored tale is Nottapon Boonprakob, whose previous credits include writing a few GDH films and directing shorts and music videos. 2,215 marks his first feature-length film. His crew of four men and two cameras were given full access to document the run, allowing them to follow Toon and the crew at meetings, concerts, event preparations, even the rocker's house.

During the run, theirs were the only cameras allowed inside Artiwara's private trailer, to see him interact with his family, running team and girlfriend, and even as he was being administered shots by the medical team to lessen his physical pain from the run.

The moments in the trailer became something Nottapon focused on quite a lot as it's something people have never seen, and they can't imagine what's been going on during those 55 days on the road. The compact crew trailed Toon on foot and on motorcycles, shooting and editing each night as they went along. In the end, they had 270 hours of footage to work with.

"Those 55 days on the road were definitely surreal," recalled Nottapon. "You woke up every day to find tens of thousands of people waiting for you. People brought food, kindness, and everything came non-stop for almost two months. I think I saw Thailand more clearly from that experience, both physically and the character of the people, too."

Nottapon described Artiwara as being quite shy and had his own concerns about what the film would be like. "Toon made it clear from the beginning that he didn't want the film to be about himself, but rather to give the spotlight to others, like doctors and nurses. He thinks people have seen him enough. And he also didn't want people to think we're making a film to laud him."

Still, the team believed the film would inspire people most if the focus remains on Artiwara. And after seeing an early cut, the rocker gave his blessing.

The film 2,215 also came with a tagline "Belief. Madness. Daring. Taking a step", which quite captured the run perfectly, as people did question in the past, and perhaps to this day, why Artiwara would go to such lengths and trade his microphone for sneakers, and his stage for the road. Some said he had his own belief. Some said he simply went mad and death-defying.

As someone who has witnessed the run and the rocker himself firsthand, the director said it was a little bit of everything all rolled into one. But regardless of what compelled Artiwara to hit the road, Nottapon said what matters most was that last part: taking a step.

"To me, what was most inspiring about it all was that Toon was just a normal guy. He's serious and sensitive. He cracked bad jokes at times. He's not a flawless, divine hero, and that makes him all the more relatable. His ordinariness was an inspiration in itself -- that, as an ordinary man, he took a step in accomplishing something so big, and inspired so many others."

2,215 will be shown to the public for free from Sept 6-16 at Major Cineplex and SF Cinema venues. Donations can be made directly at the cinema, or via SCB Easy App, True Money Wallet, direct transfer to Siriraj Hospital, and through SMS donation at 10 baht/message by sending "T" to 4545099. The SMS donation is available from tomorrow onward. Visit www.facebook.com/kaokonlakao for info and updates. 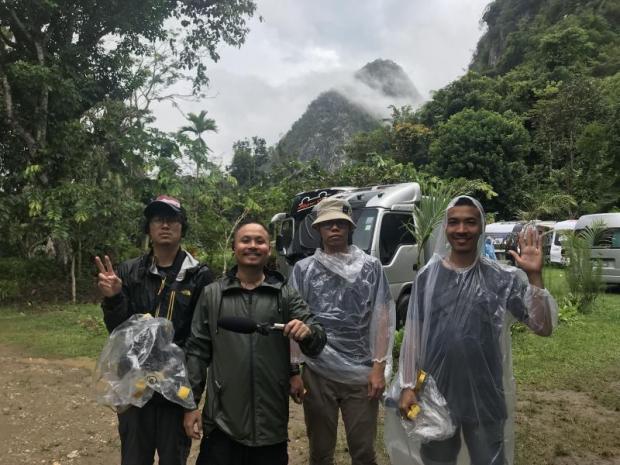 Nottapon, right, with his crew.