The oldest Khmer site ever found in Thailand was almost lost to time. Now archaeologists hope to make it a centrepiece of Chanthaburi attractions

The ancient pond of Muang Phaniat was excavated almost 30 years ago. The Fine Arts Department has a four-year plan to invest 20 million baht to excavate and renovate the site as a tourist attraction.

Laterite bricks were stacked up in three layers. The total height is about 3m. At first glance, it looks like a wall of any ancient ruins.

"This is not just a typical wall. It is part of the oldest ancient Khmer site that has ever been found in Thailand," said Jiraporn Kingtupluang, the chief archaeologist of the Prachin Buri Office of the Fine Arts Department, that oversees archaeological sites in the eastern region.

The ruin is named "Muang Phaniat", meaning dyke in the Khmer language, she said. It is located in a farmland in Muang district of Chanthaburi. 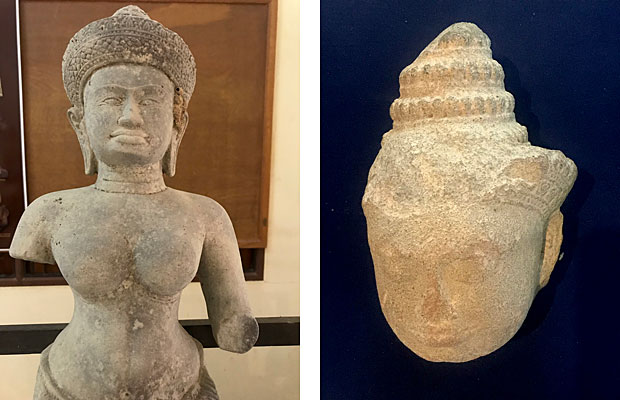 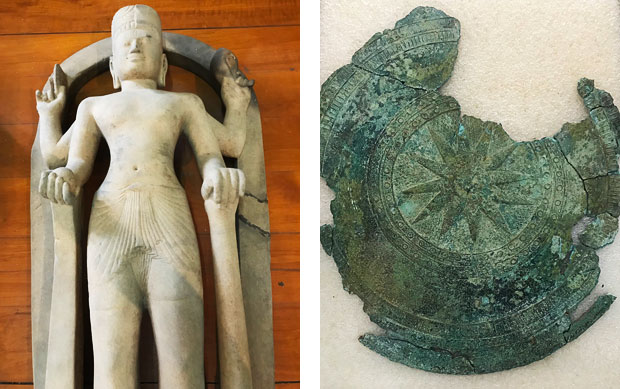 "We had sent some brick samples to find out its date. The result shows that Muang Phaniat was founded about 1,400 years ago," she said.

During an early research period, some experts claimed that the Phaniat site was used only for catching elephants, but later more evidence showed that it was a city. The shape was a rectangle. Its walls were 2km long and 1km wide.

About 30 years ago, an archaeological team of the Fine Arts Department visited the site after being informed by locals that some ancient Khmer artefacts were found. Some objects include old inscriptions (7th and 10th centuries AD), the sculpture of Harihara (6th century AD), the Hindu deity that combines the two major gods, Vishnu or Hari and Shiva or Hara into one. The sculpture was built in the style of Phnom Da, the first art style from the pre-Angkorian period. Thala Borivat style lintels indicating the art of the early 7th century of the Khmer Kingdom were also found.

"The artefacts show the trade relationship between ancient Khmer and Indian kingdoms. We believe Muang Phaniat was a harbour city," she said.

The city location sits about 20km from the Gulf of Thailand, linked to the sea via the Chanthaburi River. The site is about 4km from the foothill of Sa Bap Mountain, where a Narayana sculpture was found inside a cave.

The location can indicate that the city used the blessed water from the mountain, she said. The team also found an underground water source inside the ruin which they believe may have been used for ritual ceremonies. 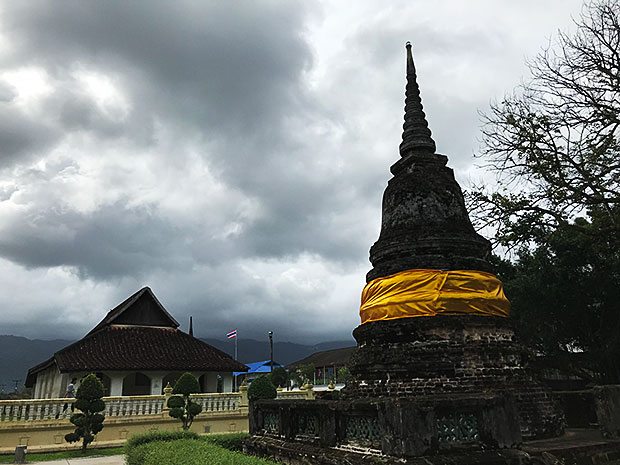 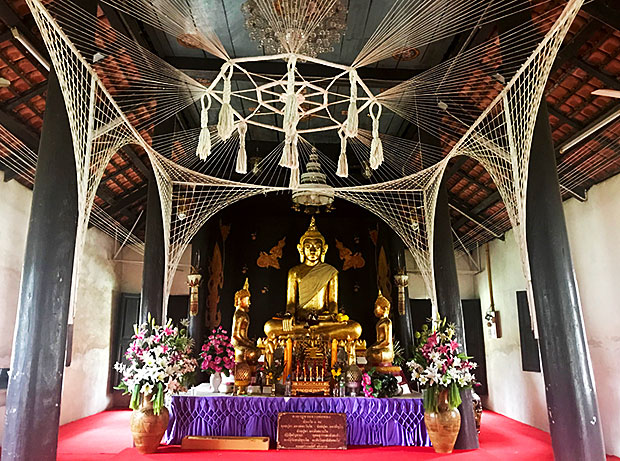 Wat Thong Thua houses an old pagoda built during the Ayutthaya period and an old ubosot (ordination hall) which is believed to have been built during the period of King Rama IV. The hall is still in use. It has a highly respected Luang Pho Thong as the principle Buddha image.

"We believe that Muang Phaniat lasted for seven centuries, starting around the 7th-13th centuries before the waterway changed its course. The city was deserted for 200 years before people settled in the area again as we also found clay pots and other artefacts dated to around the 16th century," she said.

Today Muang Phaniat is a farming community with 40% of the land used for rice fields and orchards. So far only about 25% of the ancient city has been excavated.

"We receive good co-operation from local people. Some of them donated their lands for us to excavate the site. We have a four-year plan that we will develop the ruined city as a new tourist attraction in Chanthaburi," she said.

If you visit the Muang Phaniat site today, you may not find much more than Khu Phaniat, an ancient pond, which is dry, and laterite brick walls scattered not far from the pond.

If you want to see the old artefacts from Muang Phaniat, the collections are exhibited in the museum at Wat Thong Thua, which is a short walk from the ruins. 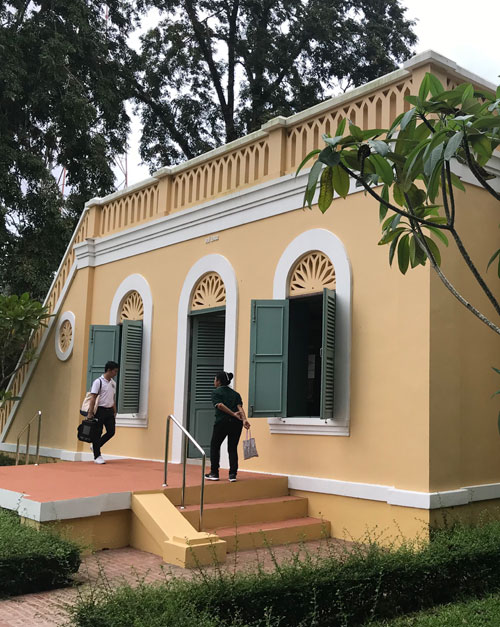 In Taksin Military Camp, there are seven colonial buildings that were used by French troops as headquarters, a firearm warehouse, prison cell and dormitory during the period of King Rama V. The buildings were renovated for the museum. Some of notable items are old banknotes and coins used during the King Rama V period, models of old ships and maps of Siam.

The temple abbot renovated a dining hall to be the Muang Phaniat Museum in 2003. He wanted the facility to be an educational centre for the community, especially children at the Wat Thong Thua school, which is located near the temple.

The museum houses ancient items found in the community as well as other items donated by people. The temple also works with the school to train primary age students as local guides for tourists.

"We learn about Muang Phaniat in our class," said Maysa Sudawan, a nine-year old Prathom 4 student. "I am proud that my community has something rare and unique that people want to visit."

He also plans to raise a 30 million baht fund to upgrade the museum in the future.

Besides the ancient ruin, Chanthaburi also has other historical sites that are worth visiting. 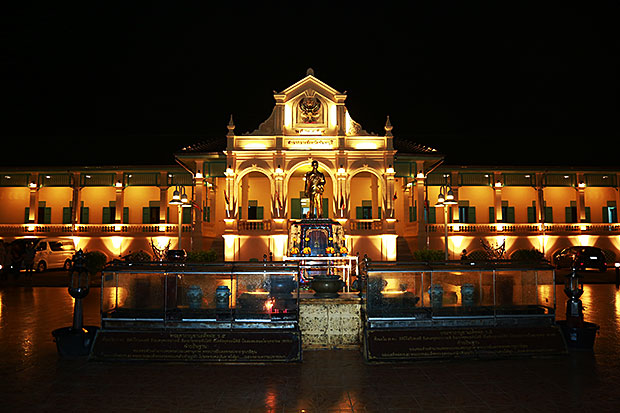 When the Chanthaburi Office of the National Archives of Thailand moved its office in 2003 to the present location, it accidentally found old official records of Chanthaburi in the basement of the building. According to the office director Sumontharikan Maryarangsri, the team found about 22 tonnes of documents. Some were destroyed by termites. They found announcements, official letters, maps and also 70,000 film negatives. The office digitised about 5,000 documents so far and will soon allow public to find those papers online. The office also has an exhibition that displays items found in the building including writing slates and slate pencils, guns and a large wooden craved garuda.

Among them is Taksin Military Camp, which is located next to the City Pillar shrine and King Taksin shrine. The camp may not look like a tourist site, but it has historical sites that can be traced to the Ayutthaya period like the remaining site of the old city wall of Chanthaburi.

There are also century-old buildings built during the period of King Rama V when Chanthaburi was seized by French troops during 1893-1905. The colonial style buildings are open as a museum today.

In addition to the elegant look of the building, visitors will find archives from World War I, old pictures of Chanthaburi as well as other artefacts, some of which are displayed in its exhibition zone.

"Chanthaburi has a long history that can be traced back 1,400 years to the Rattanakosin era. Those historical sites are well preserved," said Methadol Wichakana, deputy director-general of the Fine Arts Department.

"We still have another duty to do which is to add value to those sites. We will do that by promoting tourism. The attempt will encourage people to learn more about our history and culture and at the same time we can add more educational attractions for tourists," he added.

Built in 1711 by Vietnamese Catholics and a French priest, the Cathedral of the Immaculate Conception was expanded several times and had the present Neo-Gothic structure constructed in 1905. It is believed that the French army took laterite bricks from the ancient city of Muang Phaniat to make the base of the church. The church is among the top attractions of Chanthaburi. Apart from original stained-glass windows and floor tiles from France, a statue of the Virgin Mary is the centre of attraction. The statue was built by a team from the office of Traditional Arts of the Fine Arts Department as requested by local devotees. They wanted to have the statue decorated with 238,000 sapphires or more than 20,000 carats in total because Chanthaburi has been known as a trading hub of gems. Before leaving the church, don’t forget to check out its ceilings, which are colourfully decorated with laces of gems and jewellery pictures painted by a team from the Office of the Traditional Arts. 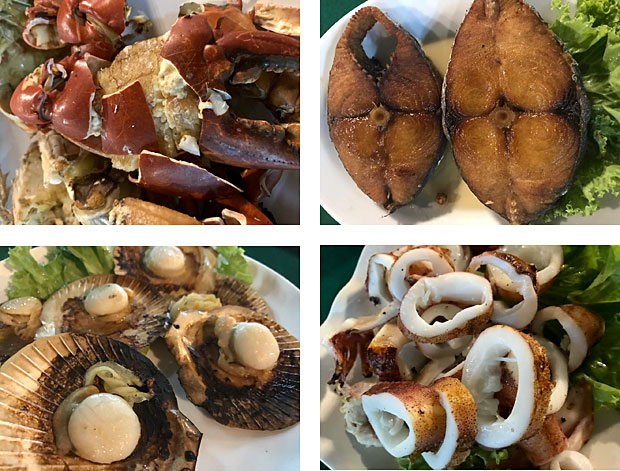 Seafood is a must-try when you visit Chanthaburi. Choices of restaurants are plenty. Last year, I tried and loved fresh seafood at Rim Nam Seafood in Tha Mai district. This year, I tried Pu Cha restaurant, about 15km from the inner city, and liked it too. Apart from mouth-watering fresh seafood, the prices are also reasonable. 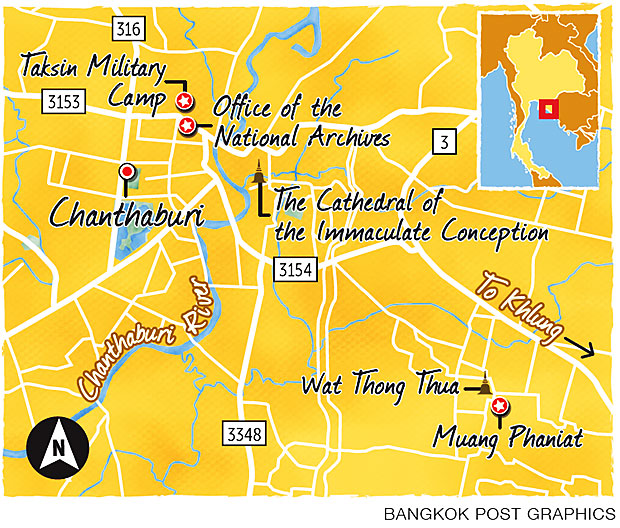