Medics on the frontline

Nanthaka Thepha-amondet, the neurosurgeon who last year received the Outstanding Alumni Award from the Faculty of Medicine at Mahidol University's Ramathibodi Hospital, has seen her juniors once again leave Yala Regional Hospital after their two-year internship, leaving her to cope with more anxiety and fatigue as she enters her 16th year in the job. 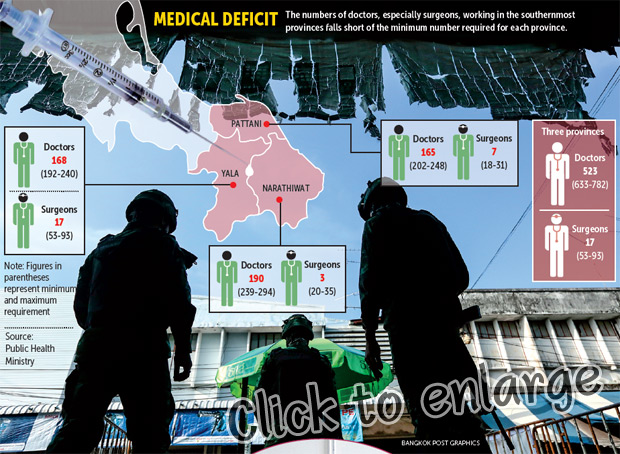 The young doctors cited safety concerns and, according to others, a need for more financial security.

Unlike hospitals in other regions, Dr Nanthaka's workplace not only serves patients suffering from diseases or injuries caused by accidents, but also treats those injured during acts of insurgency. Yala, a Muslim-dominated province in the far South, is prone to sporadic, if not daily, deadly clashes between officers and separatist hardliners.

"I'm frightened as well," Dr Nanthaka said when asked about the violent incidents.

Her fellow physicians share the same sentiment and are far from reluctant to leave when they have a chance. Her family has also implored her to work in another province due to their concerns for her safety.

"I always hope I'm not a target. I'm just a doctor who treats patients."

This mantra is one of the ways she manages to remain in situ, fulfilling her desire to help the community, despite the risks, the neurosurgeon told the Bangkok Post.

After spending time with Yala locals -- Muslims and Buddhists -- Dr Nanthaka says she was struck by their good nature, and that inspires her to soldier on despite the current lack of medical specialists in the troubled southernmost provinces of Yala, Pattani and Narathiwat.

Struggling against a heavy workload 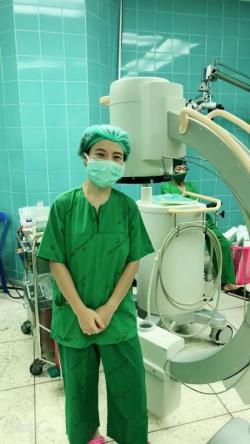 saving lives: Dr Nanthaka Thepha-amondet poses in her surgical scrubs for a picture inside her operating theatre.

The deep South has been clouded by violence since Jan 4, 2004, when militants attacked the 4th Development Battalion in Narathiwat's Cho Airong district, killing four soldiers and making off with 413 guns. Since then, the phrase "daily violence" is common when Yala, Pattani and Narathiwat are referred to in the nation's media.

Just four years after the robbery, more than 3,000 people had been killed.

During that time, "only two neurosurgeons have worked in the deep South," Dr Nanthaka recalls, saying she sees patients in Yala while the other was based in Narathiwat.

Concerns over doctor numbers have been highlighted as hospitals have had to deal with more emergency cases, often resulting in death, caused by shootings and bombings. On top of that, doctors from many departments have fled the region due to fears about the volatile situation.

As a result, she, together with the other remaining medical staff, was forced to work much longer shifts.

Dr Nanthaka says she had to "do operations every night". The worst night being seven cases in one shift which involved 18 hours in the operating theatre.

After that night, feeling drained, Dr Nanthaka asked herself what she was doing there and why just a wink of sleep could hardly ever be found these days.

The surgeon was, indeed, given a rest, but with a never-ending number of patients queuing up for operations, "I had to sleep inside the operating room during my afternoon break," she said.

An ongoing scarcity of doctors

This imbalance between doctors and patients is only getting worse and paints a worrying picture of medical services in the region.

Jesada Chaikunrat, an inspector at the 12th Regional Public Health Office based in Songkhla province, said the number of doctors working in the deep South is less than the minimum required. Hospitals are faced with shortages of specialists in fields such as paediatric surgery, orthopaedics and anesthesiology.

According to his office, surgeons in this region number 17, which is significantly less than the 93 needed. A similar gap between working physicians and the required number is also seen in other departments -- 8 against 61 orthopaedic experts, 7 against 78 anaesthesiologists and only 27 against 150 internists.

Dr Nanthaka's workplace is among the hospitals where an insufficient number of doctors is reported.

According to Public Health Ministry-compiled statistics obtained by the Bangkok Post, 82 doctors and specialists are treating patients at Yala Regional Hospital, falling short of the minimum requirement of 133.

Yala Regional Hospital director Kittisak Aksarawong gave the Bangkok Post a more diplomatic overview of the situation, arguing that there is no "scarcity" of medical staff, especially as he believes newly graduated doctors will be continually supplied to hospitals.

"Neurological treatments at the hospital are not affected. Brain surgeries still go ahead as planned every day," Dr Kittisak said.

"In case more medical staff are needed, his hospital can seek help from other hospitals," he added.

Yala Regional Hospital has dealt with the low numbers of physicians by contracting graduates under a "non-bureaucratic system" which grants them special salaries, Dr Nanthaka said in an interview with Mahidol Channel. 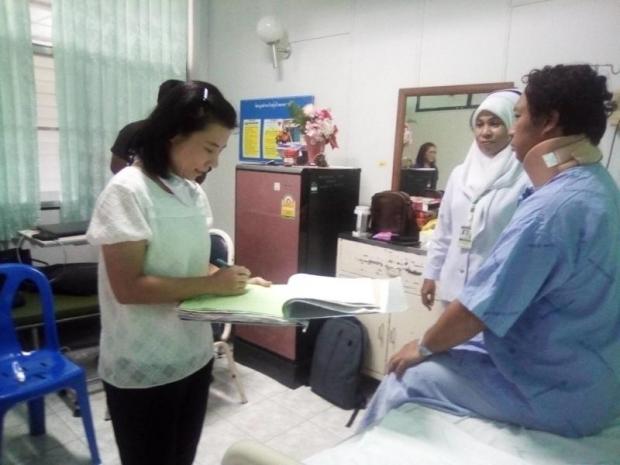 However, some only stay for the minimum allowed period of two years. "Once they gain their surgical skills, they leave," she said.

The government is aware of the problem and various agencies are giving a helping hand. The Public Health Ministry is working on the transfer of more doctors into needy departments at hospitals under its supervision while the army has its doctors on standby as back up.

"The military can send in reinforcements to increase the number of medical staff when it receives requests from hospitals," recently retired 4th Army chief Piyawat Nakwanich said when interviewed.

"The army has also set up a military hospital at the 152nd Infantry Regiment in Narathiwat as well as mobile medical teams to make sure they can reach villagers living far away from hospitals," Lt Gen Piyawat said.

While the Public Health Ministry is also planning to increase the number of specialists through new scholarship programmes, it is still unclear they will attract many applicants if they have to work in the deep South after they finish their studies.

"I don't know how many of them would want to go to the region," Dr Jesada said, adding that many local hospitals have already suffered from high staff turnover.

"Only a few of them may want to stay despite strong incentives."

Salaries have been increased since 2016 for public health staff working in Pattani, Yala and Narathiwat, along with Songkhla's four districts -- Chana, Thepa, Na Tawee and Sabayoi.

The ministry has also offered special payments to doctors and dentists at a rate of 5,000 baht and nurses at 1,000 baht per month to encourage them to stay longer in the insurgency-torn region.

Looking into the "beautiful minds"

The appropriate ratio of specialists to patients is crucial to helping the former avoid work overload and ensuring the latter receive adequate care. But while hospitals are busy edging toward this balance, Dr Nanthaka sets an example where altruism trumps financial reward.

Instead of being discouraged by the large number of patients, she chooses to embrace the help she is able to give people who she holds in high regard for their good nature and stoicism in the face of extreme danger.

Dr Nanthaka said she refused more attractive remuneration offered by other hospitals because of the intangible but highly valuable reward she gains when she meets "lovely patients with beautiful minds".

"The people here trust me," she said. "They have never demanded more than we can provide or complained even though their injuries often involve risky spinal or neurosurgeries."

"To die or not to die is determined by God," Dr Nanthaka said, pointing to the Muslim perception of life. "They place their faith in our surgeons."

Dr Nanthaka says the smiles on the faces of her patients after they have recovered from their injuries and illnesses is a reward she could never put a price on.

"It is when they come back to visit me at my office. Those moments make me feel very happy," she told Mahidol Channel.

Not only does Dr Nanthaka discover beauty in their minds, but patients also see the same thing in the heart of their physician. 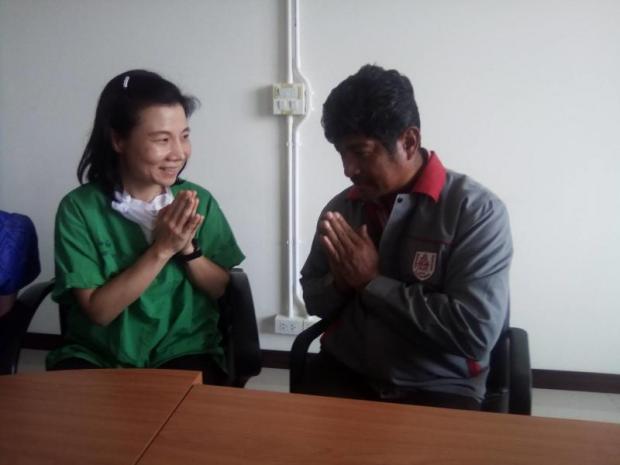 debt of gratitude: Norset Tingmuk, right, a stroke patient, wais to Dr Nanthaka Thepha-amondet, left, who has helped him return to a normal life.

Patients said Dr Nanthaka is a dedicated doctor who even gives free treatments at her clinic to villagers who cannot afford to pay.

But it is her efforts to keep them alive, sometimes against the odds, which draw the most thanks. During an interview with Mahidol Channel, a male patient said he was "so moved I could not utter a word. Only the gratitude in my eyes could thank her."

Norset Tingmuk, 51, told the Bangkok Post he survived a stroke and a brain aneurysm (a bulge in the brain's blood vessel) in 2011 because he trusted Dr Nanthaka.

"Her treatment not only made me feel like I was given a new life, but when I got stronger and healthier, I had another child, plus another wife," he said with a smile.

That happy picture is the ultimate goal of Dr Nanthaka. All her patients, she says, whether officers attacked by separatists or militants injured in their fights against the military, deserve the same chance of recovery.

In one case, two patients suffered bullet wounds to their heads, prompting urgent operations. She was able to save both and put them under close watch together in intensive care.

The pair stayed in the same room until they became conscious.

The doctor was later told they should have been separated because one was an officer and the other was an insurgent suspect.

It is hard to tell when such "divisions" will end and the far South will see a sense of harmony between the regions various ethnicities and cultures return.

Dr Nanthaka has no idea but wants to see everyone lead healthy lives.

Neither does the ex-4th army chief, but he does note a recent lightening of the mood.

"I see more smiles among southerners," said Lt Gen Piyawat before he retired at the end of last month.

"Things are getting better. People are venturing out more."

Airliner skids off runway in India, at least two dead

NEW DELHI: At least two people died and more than 20 others were seriously injured Friday when an Indian passenger jet skidded off the runway in heavy rain, media reports and officials said.