A place of gold
Travel

A place of gold

When people talk about Prachuap Khiri Khan, they mostly think about Hua Hin, the century-old resort town with the 5km-long sandy beach, or the famous Phraya Nakhon Cave in Khao Sam Roi Yot National Park. Not many are interested in the Bang Saphan and Thap Sakae districts, which have been promoting community tourism. Bang Saphan has long been well-known for gold ore and black rattan basketry, while Thap Sakae is home to pristine beaches, waterfalls and forests.

Covering an area of 6,367km², Prachuap Khiri Khan province is the last Central Region province that is adjacent to the South. Its Muang district is dubbed the City of Three Bays, since on its eastern shores are the glorious bays of Ao Noi, Ao Prachuap and Ao Manao. During the Ayutthaya period (1351-1767), the area was the location of Na Rang town. Later, in the reign of King Rama II of the Chakri Dynasty, Bang Nang Rom town was established at the mouth of E-rom stream. In the reign of King Rama IV, Bang Nang Rom, Kui and Klong Wan towns were merged into Prachuap Khiri Khan, meaning a town with clusters of mountains. In 1899, the town hall was moved from Kui town to Ao Koh Lak, or Ao Prachuap.

Orasa Awutkom, director of the Tourism Authority of Thailand (TAT)'s Prachuap Khiri Khan Office, said tourism in Hua Hin is expanding to places which have attracted more people who like slow tourism. In line with the TAT's focus on sustainable tourism, Prachuap Khiri Khan has numerous attractions and activities to offer, such as many beaches, tourist attractions in military zones, sailing in Thap Sakae and diving off Koh Thalu in Bang Saphan Noi.

Highlights in Bang Saphan are gold panning in Klong Thong, a natural stream, at Ban Pa Ron in tambon Ron Thong and shopping for rattan furniture and crafts at Ban Huai Kriab. 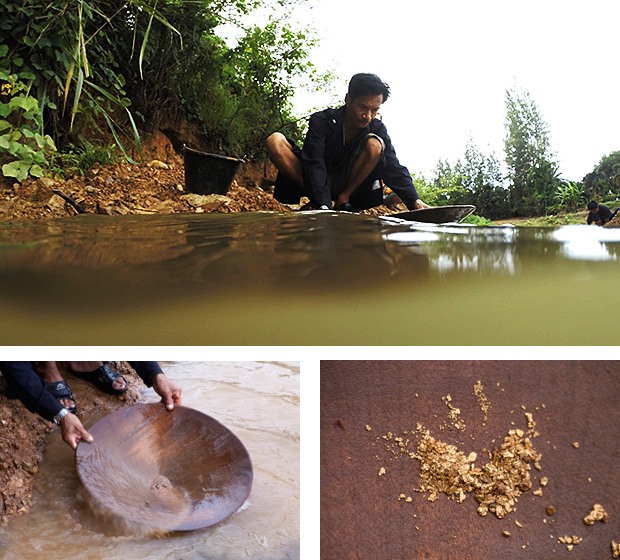 Ban Pa Ron of tambon Ron Thong in Bang Saphan welcomes visitors to experience the local way of life and try searching for gold as the locals do. Anyone can rent a large round wooden container called a liang to stir and filtrate gold from rocks and sediments taken from the water. They can take home the gold they find. A Liang is made of hard wood, such as makha. Long ago, the area had plenty of gold ore. Even recently, some people found 5 baht and 7 baht of natural gold in Klong Thong. 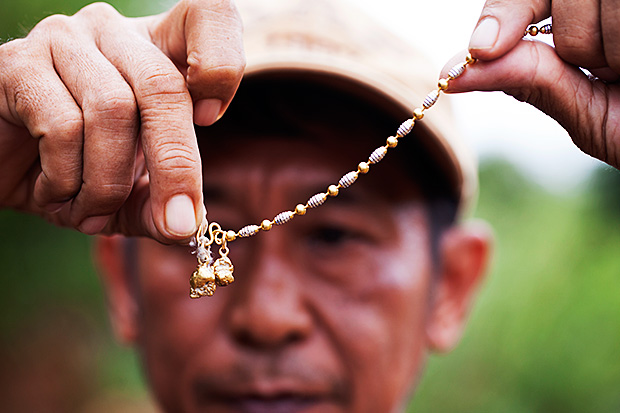 According to Nikhom Ratkhiri, a village headman of Ban Pa Ron, gold from Bang Saphan is 99.99% pure and can be sold right away to gold shops. The fame of this community began in the reign of King Borommakot of Ayutthaya Kingdom (1733-1758). It all started when some locals who came to search for wild products here found gold in the Phan Lam stream and informed King Borommakot. Gold prospectors later flocked to the stream, later renamed Klong Thong, meaning Stream of Gold, and a village for gold prospectors was set up. Gold weighing 3,200 baht was found here and presented to King Borommakot for decorating the tip of the pavilion enshrining the Buddha’s footprint in Saraburi. The late King Bhumibol Adulyadej also visited this community in 1977, and the locals presented him with gold weighing 9 baht found in the area.

One cloudy afternoon, a female teenage tourist who requested anonymity was squatting over the water in Klong Thong and moving a big round wooden container called a liang in a circular movement repeatedly and tirelessly.

"I am searching for gold. I rent this basket for filtering gold in the water for 100 baht per head per day. I come here with my family from Bangkok."

Nakhonchai Boonyen, a local man, said many villagers come to Klong Thong and the nearby creek Huai Janghan in search of gold whenever they have free time because they can earn more than from their regular farming. Sometimes, he finds 1 hun of gold. (Ten hun is equal to one-fourth of a baht. One baht of gold weighs 15.2g.)

Wat Thung Pradoo in Thap Sakae is a major Buddhist temple. Highlights are the old ordination hall with the local-style principal Buddha statue Luang Phor Yai, the new ordination hall with sema demarcation stones in the shapes of fishing boats, and a white stone Buddha statue from Myanmar in the temple museum. The temple was built more than a century ago and was restored in 1924. The temple was named after Ban Thung Pradoo which had many pradoo (Burmese rosewood) trees in the past. However, a few trees remain today. Another must-do at the temple is to walk underneath the coffin carrying the body of the late revered former abbot Luang Phor Nae, who passed away seven years ago. People believe that doing so brings safety and good health. For more information about community tourism in Ban Thung Pradoo, call Anan Hongthong, a leading villager, on 087-165-4972.

Bunyarit Daengraksa, assistant chief of the Tambon Ron Thong Administration Organisation, said: "Earlier, we arranged for tourism activities at this cultural space. We plan to build an exhibition building, parking lots and space for locals to sell products here. In the next couple of years, we will form a homestay group and a community tourism group. We need to ensure local villagers' readiness first. The villagers have begun to know they can lease liang to tourists and earn 100 baht per person per day. We will allow the villagers to take part in tourism, such as selling goods, and also become local guides. Now, tourists can stay in hotels located about 5km away. In the near future, there will be homestay accommodation here."

According to him, besides gold panning, Bang Saphan offers several options, such as trekking and visiting waterfalls like Phraek Takhian. In fruit season, anyone can enjoy mangosteen and durian. Monthong durian from Ban Thong Loi is delicious and tastes the same as the well-known durian from Pa La-U.

After a day in Bang Saphan, tourists can spend a night or two at any resort on the peaceful Ban Krut beach. Another interesting destination is Thap Sakae district. Tourists can visit Wat Thung Pradoo and Ban Thung Pradoo to experience the local way of life and the making of sang kor, man-made "reefs" for fish, and visit organic farms. The majority of the community's approximately 2,000 residents are fishermen. The community provides homestay accommodation, the saleng (modified motorcycle sidecar) taxi service and sand-spa treatment to tourists. Each sand-spa session consisting of lying down under the sand, a sauna and massage lasts 45 minutes and costs 300 baht per person.

Visitors should also try delicious and cheap khanom jeen Thung Pradoo (rice noodles with assorted kinds of curry) and enjoy shopping for cold-pressed coconut oil, related products and coconut-shell handicrafts. Another must-see is the century-old wooden Thung Pradoo Railway Station, which should be conserved, but unfortunately will be demolished and replaced by a modern building soon. 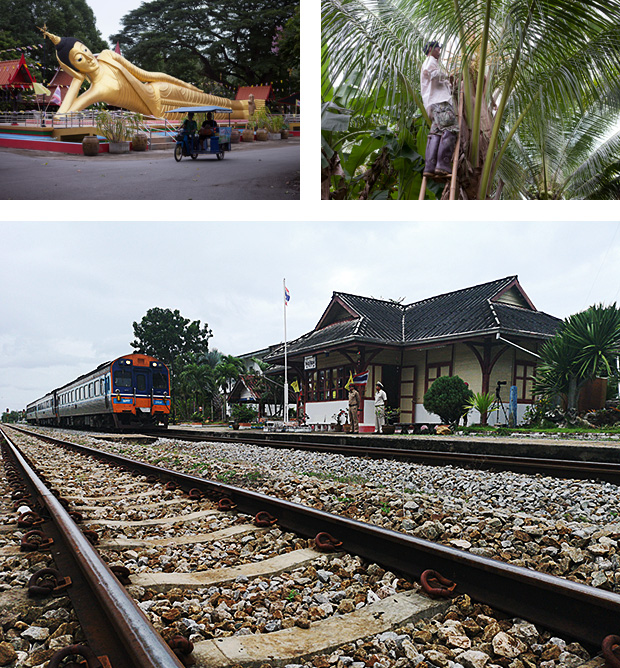 It is easy and convenient for tourists to see much of Ban Thung Pradoo in Thap Sakae by hiring a saleng (modified motorcycle sidecar) taxi for 300 baht per trip. Each taxi can accommodate between two and four persons. Tourists will be taken to Wat Thung Pradoo, the community centre where the making of sang kor is demonstrated, for sand-spa treatment on Thap Sakae Beach, an organic vegetable farm and a coconut plantation. At the coconut plantation, visitors can observe the way regular coconut trees are bred to yield creamof-the-crop coconut using modern technology from Israel. 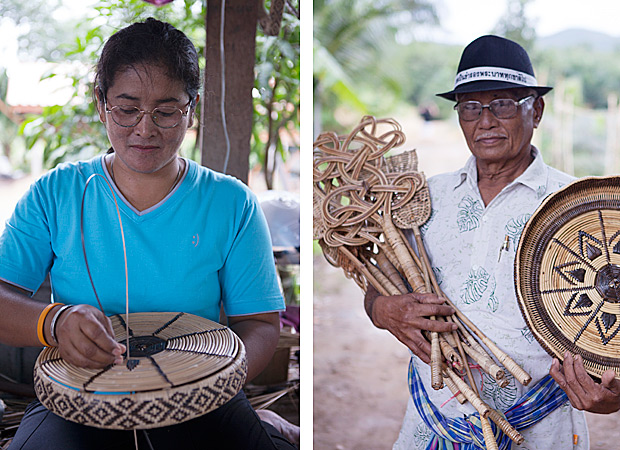 Rattan basketry in Ban Huai Kriab was started around three generations ago. The first type of rattan product was bung kee, a kind of strong and durable basket for carrying soil and sand used in the construction of the Bang Saphan-Chumphon stretch of Phetkasem Highway. Other products of the early times were pineapple-carrying baskets and other baskets. Ban Huai Kriab Rattan Weaving Group currently consists of 38 members, including 25 local villagers and nine shops. The locals combine white and black rattan and apply basketry techniques taught by their families and those learned from basket-making groups in Ang Thong and Surin provinces. It takes a few days to weave a fruit tray, which can be sold for at least 1,500 baht. Popular products include fruit trays and laundry baskets that sell rapidly at local shops and (One Tambon One Product) Otop fairs. Each family usually earns between 20,000 and 30,000 baht from selling rattan products at an Otop fair in Bangkok, according to Chantharat Yokiat, secretary to Ban Huai Kriab Rattan Weaving Group. The locals also grow palm, rubber and coconut trees. The majority of locals migrated from the typhoon-hit Ta Loom Phuk Cape in Nakhon Si Thammarat province in 1962. For more information, contact Ban Huai Kriab Community Centre on 089-919-7836. 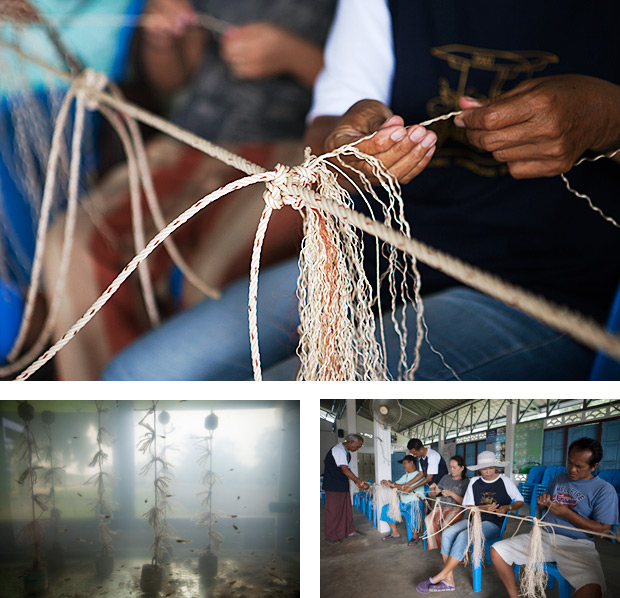 Residents of Ban Thung Pradoo in Thap Sakae make sang kor from bamboo and coconut leaves and install clusters of them in the sea, a bit like a reef. Sang kor attracts plankton and then fish. According to the villagers, sang kor has made the sea in front of their communities more abundant with fish. 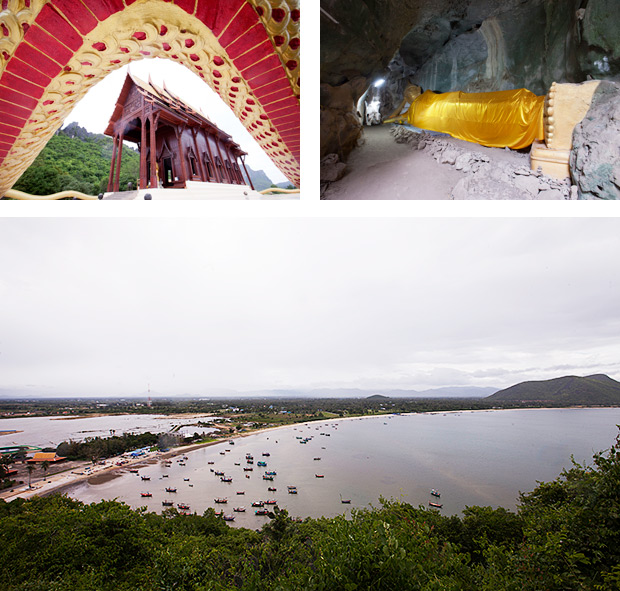 On the way to or from Bang Saphan, tourists can visit a small cave on a hill overlooking Ao Noi near Wat Ao Noi (Tham Phra Non) in tambon Ao Noi, 3km from Khao Chong Krachok, a wellknown mountain in Muang district. The cave is the abode of Prachuap Khiri Khan’s oldest and largest reclining Buddha statue, dating to 300-500 years ago, as well as other reclining Buddha statues and several seated Buddha statues. Also, the temple boasts a gold teak ordination hall, decorated with fine wood carvings of the Lord Buddha’s life and surrounded by a huge naga statue. 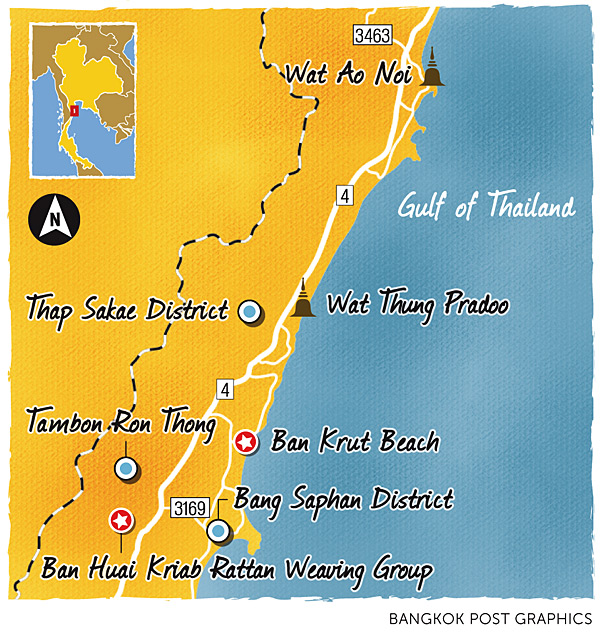