Koh Loy, a small water park, is known as a quiet oasis within Lumpini Park. However, the space recently became crowded with tree climbers who used slings to hover and gyrate in the air.

All of the performers wore helmets and some of them even carried huge pruning shears in their hands.

The event, the country's first tree climbing event, was dubbed the "Thailand Tree Climbing Championship (TTCC) 2018" and was held between Dec 12-16.

Despite the name of the event, the participants were not there just to climb trees.

Attending were 33 arborists from places such as Singapore, the Philippines, Malaysia, Hong Kong, China, Taiwan and Thailand.

Oraya Sutabutr, the organiser of the event and a coordinator of the Thailand Urban Tree Network, admitted that TTCC 2018 was about more than just tree climbing. The main purpose was not trophy hunting but to promote the profession of arborists to Thai society.

Known as "tree surgeons", the concept of arborists is relatively new in Thai society.

"People cannot differentiate arborists from those who cut down tree branches. However, arborists are individuals who have in-depth knowledge of tree science and nature."

Thailand only has a few arborists, who work for private gardens, located in high-end hotels and embassies.

People who cut big trees along the roads of Bangkok are labourers from the Bangkok Metropolitan Administration (BMA) or workers of the Metropolitan Electricity Authority (MEA).

These "tree cutters" are not classified as arborists and their work speaks volumes to this fact. Tree cutting activities on the streets of Bangkok has faced strong criticism from the public and is often condemned.

But things are changing.

Those agencies are now sending their staff to learn how to trim trees alongside professional arborists, according to Ms Oraya, who is also a founder of the famous civic group, BIG Tress.

BIG Tress and partner agencies run workshops which have professional arborists on-hand to provide training on how to appropriately take care of big trees. 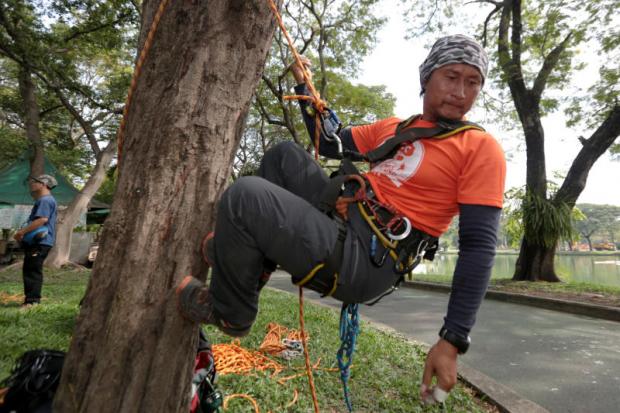 "It is important to make the public realise that arborists have a key role in preserving big trees in the capital. Since Thailand has a limited number of arborists compared with developed countries, it is essential for the country to train arborists on par with the international standard.

This is also a way to move up on the career ladder in Thailand," she said.

Ms Oraya said education and training for saving big trees in the capital will pave the way for a big change in society and lead to a capital which takes good care of its big trees and natural environment.

She explained that in the past people paid no attention to big trees and often saw them as a barrier to the city's development.

They could cut big trees down at free will at any location if they were deemed to be an "obstacle".

Only a few branches were spared from being cut if the big tree was aggressively confronting power wires. There was no rules, pattern, or regulation on how to leave space for a tree to breathe.

The TTCC competition is an important venue, in which Thai arborists have the opportunity to learn from the pros.

After the competition, they receive a certificate, showing that they have passed a certain level of qualified training for arborists.

Thanin Srithong, a 56-year-old staff member from the BMA who was the oldest participant in the event said he had no desire to get any trophy.

"What I want is to learn new techniques and modern technology so that I can improve my capacity to take care of big trees in city parks," he said. 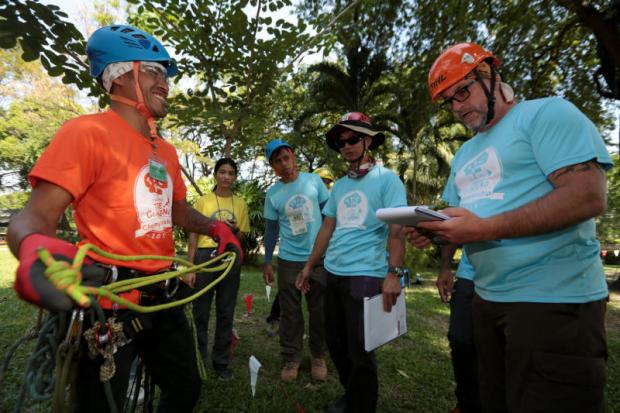 Mr Thanin said that his experience relates to cutting big trees. Previously, his boss usually made an order for which branches should be cut. But after his training, he acknowledged that he was now better aware on how to cut branches without making as much of an impact on a big tree.

"The big trees need to have leaves to breathe and survive. Cutting down all of the branches increases the time it takes for a big tree to recover. In the case a big tree is very old, it may not be able to recover and die. I finally realised that in such cases the big tree should be entirely cut down but I need to follow orders. However, now I am trained and know how to cut big trees and I can discuss the situation with my boss regarding the proper way to trim a big tree," he said.

Social media has played a key role in raising the public's awareness of protecting big trees.

The latest posts of a big tree being cut down in front of Emporium Mall on Sukhumvit road promptly alerted the BMA's senior officials on how to take care of trees, followed by arboriculture training to its staff.

Martin Tay, a judge from Singapore, said that the Singaporean government takes the protection of big trees in the city seriously.

Any plan to cut down or remove a big tree from private land requires a permit from the authorities first. Moreover, any big tree planted on private land must be taken care of by the landowner.

He said that the government has invested in protecting and preserving big trees in urban areas by hiring a company.

Big trees, he said, have value. They provide more benefits than the smaller trees and are full of historical value. Planting new big trees and waiting for them to grow takes a long time and does not provide adequate green space for people living in the city.

"To get big trees to remain in your community. you have to invest. You have to keep its space free from any development and keep it in the best form," he said.

Meanwhile, Ponthep Meunpong, a lecturer of the Faculty of Forest, Kasetsart University who was also the first Thai person to receive certification from the International Society of Arboriculture (ISA), said Bangkok has few green areas with around 3 square metres per person, compared with the accepted level of around 30 square metres per person.

He said policymakers have given less attention to green areas in the urban environment as many big trees were cut down to aid in the city's growth. Worse yet, he added, most of the big trees pose a threat to passers-by, especially in Lumpini Park, where most of them are regarded as unsafe.