While the rail system for public transport is under construction around the country, traffic chaos can be expected throughout this year in Bangkok, particularly in the north, as several projects gather steam.

The Green Line extension linking Mo Chit to Khu Khot in Pathum Thani, via Saphan Mai, is still under construction. The 19-kilometre project is now 69% complete and is expected to be functioning next year.

Motorists along the route can expect traffic woes in some stretches as some traffic lanes are still closed to make way for construction.

Work is also proceeding on the Pink Line that connects Khae Rai in Nonthaburi to Min Buri and the Yellow Line linking Lat Phrao with Samrong in Samut Prakan.

Work on the 30.4km Yellow Line has already caused traffic snarls on Lat Phrao Road, particularly during rush hours. The two projects are due to be launched in 2021. 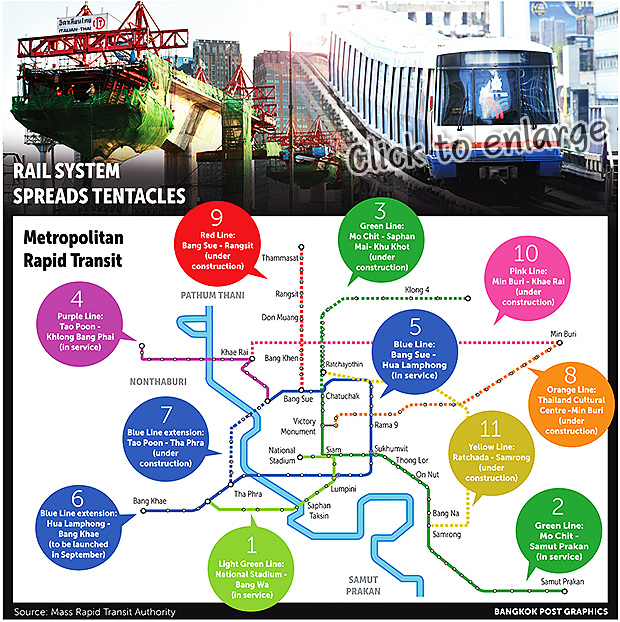 People travelling on Ramkhamhaeng Road may also encounter traffic jams this year as the 21.2km Orange Line is still under construction. The route, which links the Thailand Cultural Centre and Min Buri, is 11.91% complete and is expected to be launched in 2023.

The good news is that the Green Line extension between Mo Chit and the Lat Phrao five-way intersection -- it runs for one station -- should open in August. The move could ease tailbacks on Phahon Yothin Road between the intersection and the Department of Land Transport.

This news came after authorities opened both the Ratchayothin underpass, a flyover located at the Kasetsart University intersection, and a road linking Phahon Yothin and Lam Luk Ka in Pathum Thani late last year.

A flyover across Ratchayothin on Phahon Yothin Road and an overpass over Sena intersection are expected to be in service next month.

People on the Thon Buri side of the Chao Phraya River will from September start using the 15.9k m Blue Line extension between Hua Lamphong and Bang Khae. Another 11km extension from Bang Sue to Tha Phra will be in service in 2020. In the future, the ARL will be incorporated into a high-speed rail project connecting the three major airports. The operator of this megaproject which links Don Mueang, Suvarnabhumi and U-Tapao airports, will run the ARL, likely in the next two years.

Charoen Pokphand Group (CP Group) and its allies are the favourites to be selected to run the project.

In May, commuters should be able to use a single card for BTS Skytrain routes and the ARL as a common ticketing system is due to be implemented.

Tier-2 cities on board

The government is gearing up efforts usher in electric train projects in major cities in provinces that are struggling with heavy traffic.

Bidding is likely to be launched in June, though this also depends on the new government to be installed after the election, which could be held any time between February and the end of May.

In Chiang Mai, three light rail routes covering a total of 35km are on the cards.

The first, which links Nakornping Hospital with Big C Hang Dong, is due to welcome bids in June. The 12.54km Red Line route is top of the list. Another two lines will be mobilised afterwards. The 11.92km Green Line will connect Chiang Mai Airport with Ruam Choke intersection, while the Blue Line will run from Chiang Mai Zoo to the Promenada shopping mall over a distance of 10.45 km.

In Phuket, bidding for a light rail transit project from Tha Noon train station in Phangnga to Chalong intersection is likely to be called late this year. Construction could begin early next year. The 58.5km project is expected to be operational in late 2023.

Meanwhile, strong cooperation between local administrative organisations and the private sector in Khon Kaen has resulted in plans for another light rail project.

The first line, which runs from Samran in the northern area of Khon Kaen city to Tha Phra station in the south, will be finished this year and put into service in 2021.

This is one of five routes that comprise the 300-billion-baht project in the northeastern province.

Off the rural track

The State Railway of Thailand (SRT) is stepping up efforts to build doubletrack rail lines in various provinces.

The first five stations of the doubletrack rail route from Jira intersection in Nakhon Ratchasima to Khon Kaen have been in service since last October. The whole line, stretching 187 km, is expected to be in service by August.

Before year’s end a number of construction bids for various lines are due to take place.

Shifting up a gear

Two more high-speed projects -- the Bangkok-Hua Hin section and the Bangkok-Chiang Mai route -- are unlikely to win the cabinet’s approval by next month’s election, experts say.

Regarding the 670km Chiang Mai-Bangkok project, Japan has confirmed it won’t invest in the scheme after calculating the construction costs could shoot up to 526 billion baht.

The Bangkok-Hua Hin project, worth 100 billion baht, is now in the process of being rerouted while more environmental impact assessments are done.

The first phase, measuring 3.5km from Klang Dong to Pang Asok in Pak Chong district of Nakhon Ratchasima, recently held its groundbreaking ceremony. The bidding process for another six phases should be carried out this year.

The project, which will see trains run at speeds of 250km/h, will be operational in 2023. When completed it will slash the travelling time from Bangkok to Nong Khai from 11 to three hours.

The route will also be extended to the Lao capital of Vientiane.

It will start from Na Tha station in Nong Khai’s Muang district and pass through the new Thai-Lao friendship bridge, designed to specifically accommodate railways.