SMOKE GETS IN YOUR EYES: Industrial smog from rock-grinding activities fills the air and is blamed for the air pollution in Saraburi.

SARABURI: It was one fine day for Nong Ormsin, a seven-year-old student from Ban Khung Khao Khiew School in tambon Na Phra Lan in Chalerm Prakiat district, one of the areas with the worst air quality nationally as the area has served as a hub of rock-blasting mines for decades.

The girl enjoyed a variety of food and entertainment activities provided by mining-related companies that on Friday also organised a medical health check event for people in the community.

The primary school is not far from the stone mining site. Traces of explosions are present behind the school.

"My mother has a cold now," she said. "Many times I have not been able to go to school because I get sick. In my school, some days the windows are closed to prevent dust from getting into the classroom. It is not hot because there is a fan in the room."

She said teachers would often tell the students how to deal with dust by wearing a mask or using a wet cloth to prevent dust being inhaled. "A wet cloth is good to catch dust," she said.

The food and entertainment event was organised ahead of Prime Minister Prayut Chan-o-cha's expected visit to the site on Monday.

Nong Ormsin is among 20,000 people in tambon Na Phra Lan that face the challenge of how to control the large volume of particles that float in the air for many months a year. The main source of particles is believed to be the mines. 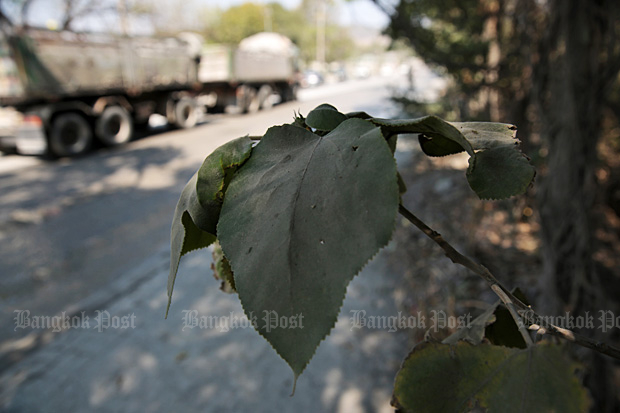 According to the Provincial Industry Office, there are 133 plants, 17 mining sites, 32 stone mill plants and 22 stone dressing plants. The level of particles of PM10 in the community is almost three times higher than the safety standard of 120 microgrammes per cubic metre (µg/m³). The Thaksin Shinawatra-led government in 2004 announced pollution controls for 35,625 rai of tambon Na Phra Lan. Penalties are enforced to improve the situation.

Speaking at the opening of the "Safety Mining" project at the school, which was attended by 1,000 people, Wisanu Tabtieng, chief of the Department of Primary Industries and Mines, said the government collects royalties from stone mining activities of about two billion baht per year. He said the money is spent on developing the area.

However, he added, mining under the department's supervision is carried out based on regulations to prevent smog, rehabilitate the community's environment, and look after the health of people living around the sites. He said mining companies must take care of communities near mines to minimise the impacts. 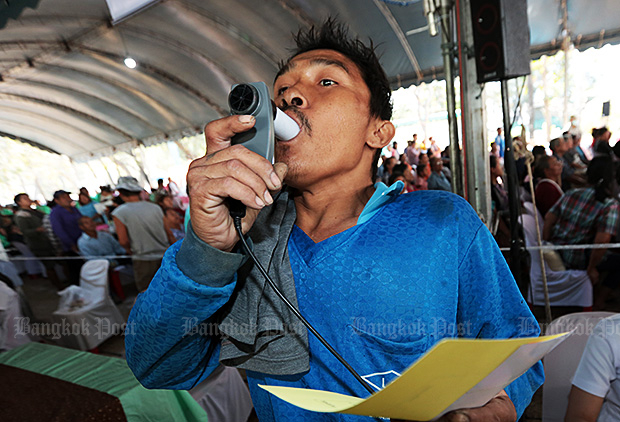 CHECK-UP: A man breathes into a lung-testing device during a health checkup offered to residents living with polluted air.

A source from the department, who asked not to be named, said the plants operate under standard requirements. He said that, according to the law, mining companies must set aside funds to take care of the environment and local people.

The 15-year effort to deal with air pollution in tambon Na Phra Lan is has not produced a satisfying result as the volume of particles floating about is still high.

The safety standard of PM10 is usually exceeded on a monthly average between October and March. Last year the amount of PM10 was 167 µg/m³ in January, 173 in February, 139 in March, 139 in October and 163 in November. There has been no significant change in the average in the past five years. Meanwhile, the average amount of PM2.5 nationwide is around 54 µg/m³, compared with the safety standard of 50. 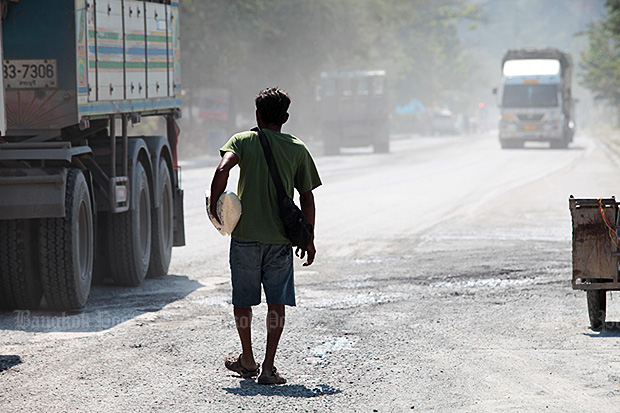 LOW VISIBILITY: A pedestrian walks along the road in Saraburi where dust coats the air. Water has been sprayed on the road to suppress the dust, but the efforts have not proven to be effective.

Unfortunately, the air quality in the pollution control zone is still poor and has impacts on people's health when the level of PM10 exceeds the safety standard for one week with 153-256 µg/m³. And the level of PM2.5 is currently between 45-79 µg/m³.

As of yesterday, tambon Aom Noi in Samut Sakhon's Krathum Baen district scored worst in the air quality index (AQI) with a score of 225, followed by tambon Na Phra Lan in Saraburi (222), and tambon Na Muang in Ratchaburi's Muang district (206). 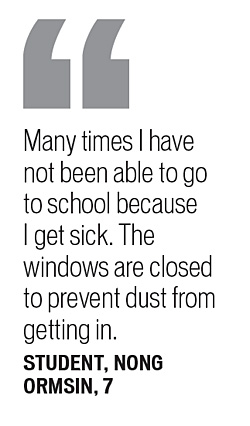 Thalerngsak Phetsuwan, deputy chief of the Pollution Control Department, admitted there has not been a significant change in air quality in the areas, but he insisted state agencies have done their best to control the situation.

"We have seen strong efforts from all stakeholders, including state agencies and the private sector to control the situation. We don't want to see the number growing higher than this," he said, adding that all sources of pollution are now under strict control to reduce air pollution.

Prayut Thima, a 65-year-old local, said he felt the particles are not the major problem for him because he is familiar with it. The problem has carried on for a long time and his health is still good. A medical checkup showed he has no problem with his respiratory system, and he believes the situation is improving.

"In the past, we could be in the smog for several weeks with little sunshine. But now, I feel that it is better. The road has been frequently sprayed with water," he said, adding that he has learnt about smog problems in Bangkok and that people are worried.

He said Bangkok people are not familiar with the problems his community has dealt with for a long time.

Meanwhile, Tanapipat Vitoochuleechot, mayor of Na Phra Lan Sub-district Administrative Organisation, said he believed that the situation now is better than the past.