Japanese cuisine still on a roll

A chef prepares an order at Taste of Japan.

Thai consumers have developed a strong appetite for Japanese, as evidenced by the multiplying number of Japanese brands that have made Thailand the largest Asean market for Japanese food.

In fact, Japanese cuisine has been widespread in Thailand for more than three decades. But its popularity surged anew after Japan relaxed visa requirements seven years ago for foreign tourists, including Thais.

Since July 2013, Thai citizens staying no longer than 15 days in Japan don't need to obtain a visa. 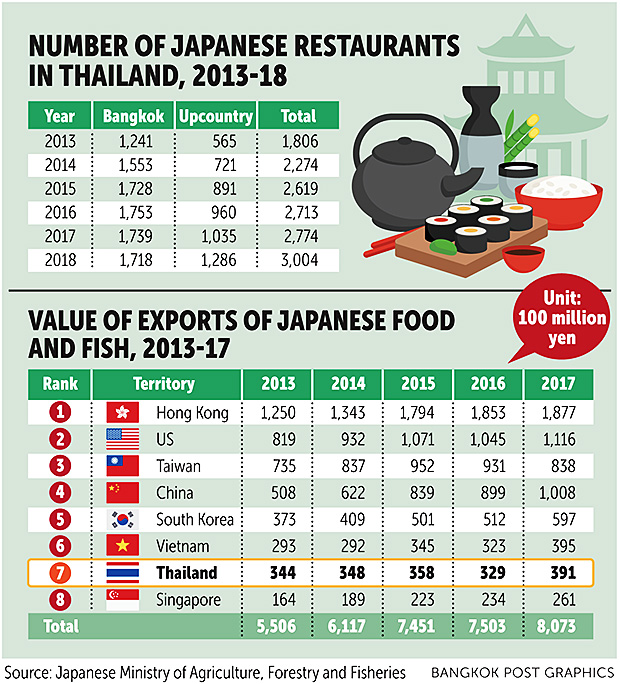 And despite a new departure tax, or "sayonara levy", charged to all passengers leaving the country, Thai outbound travel to Japan is expected to continue growing this year, according to the Thai Travel Agents Association (TTAA).

Effective Jan 7, both Japanese and foreign travellers leaving Japan by plane or ship are required to pay a departure tax of ¥1,000 (about 300 baht). The levy is added to airfares and ship fares. 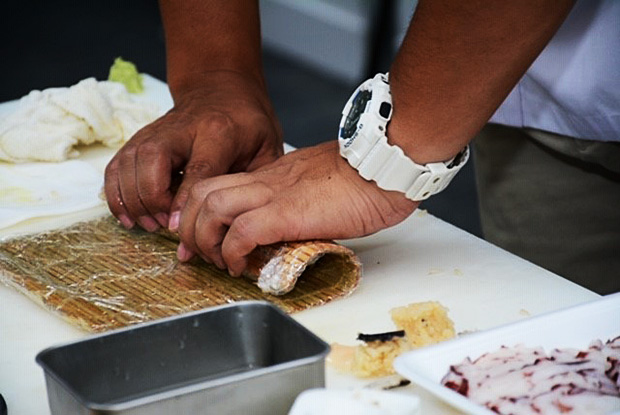 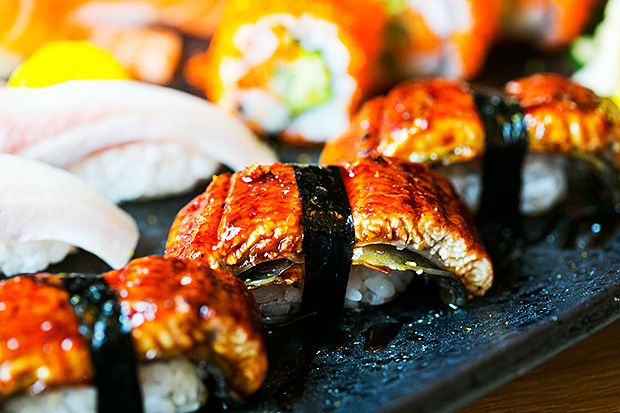 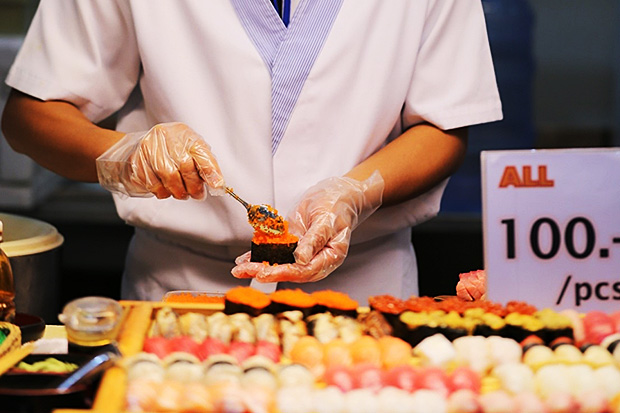 From top: A chef prepares sushi at Taste of Japan during Japan Expo Thailand last week; a variety of sushi; a chef adds roe to a sushi offering at the expo.

The TTAA predicts the number of Thai tourists visiting Japan this year to exceed 1 million again after breaking a million for the first time in 2018.

Visits to Japan have led Thai travellers to keep more deeply in touch with Japanese food culture. As a result, Japanese restaurants have sprung up all over Bangkok and major cities.

"According to our market survey from June 1 to Aug 31, 2018, only four provinces -- Sukhothai, Nong Bua Lam Phu, Bung Kan and Yasothon -- don't have Japanese restaurants," said Kaoru Fukuta, director of the Agriculture and Food Department at the Japan External Trade Organization in Bangkok. "At present, Thailand is the biggest Japanese food market in Asean, with over 3,000 restaurants, followed by Singapore and Vietnam, where the number is a little more than 1,000."

According to Ms Fukuta, the number of Thai tourists visiting Japan is expected to keep rising. 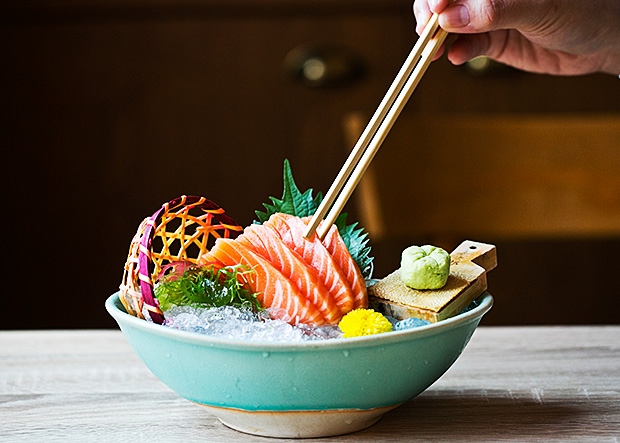 "We have continuously opened at least 10 restaurants for the last three years, compared with only four or five in previous years," Mr Nath said. "Though there are many Japanese restaurants parading into the market, sales of CRG's Japanese food portfolio have grown by an average of 10%, with some brands making outstanding growth of up to 25%."

Mr Nath said there is a huge potential for Japanese food because Japanese restaurant branches are concentrated in Bangkok, suburban areas and some tourist destinations.

In a move to tap the ample business opportunity, CRG centralised development at its R&D centre last year to create at least three new menu items for each Japanese brand. The company this year will also launch new formats for a few Japanese restaurant brands to serve customers at current locations.

"Smaller-sized restaurants will help increase our expansion's flexibility," Mr Nath said. "However, it's not easy to do a Japanese restaurant business, because the entry barrier is very low. Offering new menu items to draw customers is not enough. We will rely more on technology to offer proper service to customers who have more complicated demands."

Anujtha Jaovisidha, director of JAO Prosperity Co, the operator of Kimukatsu Millefeuille restaurant, said she believes that almost all popular Japanese restaurant brands across Japan have now opened their doors in Bangkok.

"Thai people easily accept Japanese food because of Japan's recognised quality," Ms Anujtha said. "The Japanese food business has never stopped growing, whether the economy was good or bad. Therefore, I decided to jump on the bandwagon last year after travelling five times to Japan."

"We've earned a warm welcome from Thai customers since opening last year," Ms Anujtha said. "About 50% of customers have returned to our restaurant, though there are many choices of katsu restaurants here. Kimukatsu Millefeuille Katsu offers one of Japan's most authentic creations, which is high-quality pork thinly sliced and stacked into 25 layers before slowly frying them to perfection. This technique is traditionally used in Japan and not elsewhere."

"Consumers have more alternative food options," Mr Paisarn said. "Serving only value-added products to the customer is not enough, so we also enhance the eating experience for them."