It's around 9am and Suchart "Tee" Daengpayong was doing his usual morning "bird walk" along the salt farms of Samut Sakhon's Khok Kham seashore community. 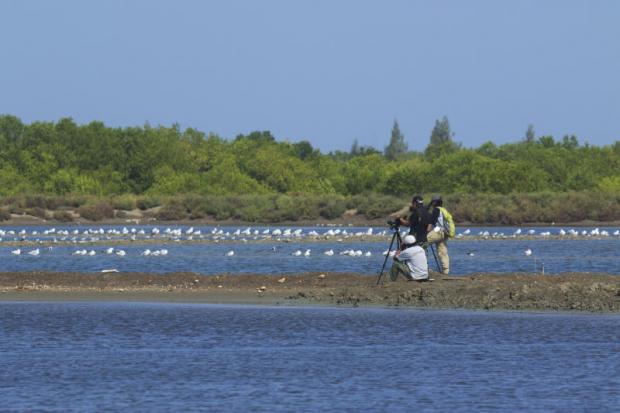 Bird watchers set up their equipment to look at migratory birds which have flocked to the salt farms in the seaside community of Khok Kham in Samut Sakhon. The spoon-billed sandpipers (inset) descend on the mudflats at the end of their long trip from northeast Russia. Photos from Bird Conservation Society of Thailand

A Khok Kham native, Tee is an avid bird watcher and an active member of the Bird Conservation Society of Thailand.

However, that morning he was looking for one specific creature in particular -- a female migratory spoon-billed sandpiper dubbed "No.5". He finally spotted it, although what he saw gave him cause to be alarmed.

For many years, broad-billed sandpipers, curlew sandpipers, common redshanks, red-necked stints and turnstones have been making the long, arduous flight to escape the frigid Siberian climate and head to the mudflats of the Gulf of Thailand from October to March.

The bird-watching veteran used his binoculars to look around. Suddenly, "No.5" came into view. It was walking along the fertile mudflats, picking small insects off the ground.

"There she is, two weeks later than last year," he said.

Jubilant at the sighting, Tee posted a short clip of the "Spoonie" on social media to share the news with his fellow birdwatchers, who had been waiting to see when, or if, she would show up this year.

Also known as "Lime No.5," the bird is named after the tracking number tagged to her left leg. She was first observed and photographed on the wintering grounds at Khok Kham in 2013 after a long-distance migration.

After spending their winter (June-August) breeding in the coastal moss and lichen tundra of Russia's Chukotka and Southern China, the flock of "spoonies" make the migratory journey south to the radically different tropical environment in South and Southeast Asia, where they usually stay for at least six months from October to March.

Thailand's inner Gulf around Samut Sakhon is one of their seasonal homes, rich in feeding areas and food sources. 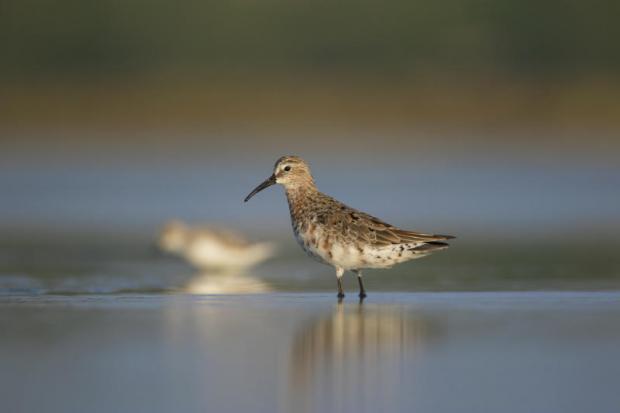 A curlew sandpiper lands near the coast to look for food.

When the tide is high during daylight hours, the spoon-billed sandpipers and thousands of other shorebirds belonging to more than 50 species feed and rest around the margins of shallow, water-filled salt-pans.

In the late afternoon and during the night, they descend and feed on the bounty of natural food on the mudflats exposed during low tides.

Spoon-billed sandpipers breed in the Chukotsk and Kamchatka peninsulas in the Russian Far East, and migrate 8,000km through Japan, Korea and China to the warmer winter in Bangladesh, Myanmar and Thailand.

But wildlife experts have picked up a worrying sign. Fewer birds have started arriving in Thailand and conservationists blame the sudden drop to the country's dwindling wetland areas, growing urbanisation and the effects of climate change.

The spoon-billed sandpiper is a flagship migratory shorebird species earmarked for protection. The risk to its habitat makes it one of the most threatened birds on the planet. The International Union for Conservation of Nature (IUCN) listed it as a critically endangered species in 2008.

It already tiny population is facing imminent extinction, possibly as soon as within the next five 10 years, according to experts. Studies of their breeding grounds indicate there are 360-600 left on the planet, and even this figure may be overstated. 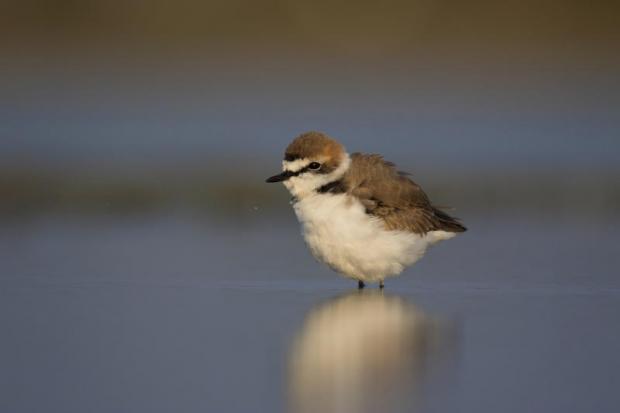 above  A kentish plover walks on the placid plain.

A project by the United Nations Development Programme called the Conserving Habitats for Globally Important Flora and Fauna in Production Landscapes Project has selected Khok Kham as a focal area for conserving the spoon-billed sandpiper in Thailand.

Apart from the spoon-billed sandpipers, the project also focuses on protecting the Eastern Sarus cranes in Buriram and water lilies in Ranong, as well as other native flora and fauna on the endangered list.

The spoon-billed sandpiper was first spotted in Thailand in 1984 at Khao Sam Roi Yot National Park in Prachuap Khiri Khan, more than 100km south of Samut Songkram. Another 13 were seen in Pattani Bay that same year.

Since 1999, the species has become a regular visitor to the coastal wetlands in the inner Gulf including Samut Prakan, Bangkok, Samut Sakhon, Samut Songkhram and Phetchaburi.

Each year, these provinces provide a temporary home to between 10 and 20 of the sandpipers.

"Lime No.5" was first observed and photographed on her wintering grounds on Nov 30, 2013 at Khok Kham, regarded as one of the most important bird-watching and biodiverse areas along the East Asian Australasian Flyway.

The flyway is a major waterbird migration route designated as a Ramsar site for the Conservation on Wetlands of International Importance. The flyway extends from the Arctic Circle in Russia and Alaska southwards through East and Southeast Asia, to Australia and New Zealand, crossing 22 countries in all.

Action is urgently needed to prevent the extinction of the spoon-billed sandpipers. Urgent time calls for urgent measures.

In breeding season, the first clutches of eggs are taken to incubators as part of a programme by Russian ornithologists and UK aviculturists. Hatched chicks are raised in captivity before being released into the wild.

"Lime No.5" laid 17 eggs that upon being hatched were raised in captivity and released from 2013-2017. After breeding season, she flies from Meinypil'gyno in Russia to Khok Kham, and she has been returning to the same spot every year.

In Khok Kham, a dozen people, including some youngsters, were following Tee on his bird-watching expedition the day this reporter attended. After two hours, the group sat down and exchanged views on the visible characteristics of the shorebirds spotted in the community.

Thanks to the power of social media, more people have begun visiting Khok Kham hoping to catch a glimpse of Lime No.5. Tee said he hopes the visits hammer home the importance of caring for rare and endangered birds among Thai youth. 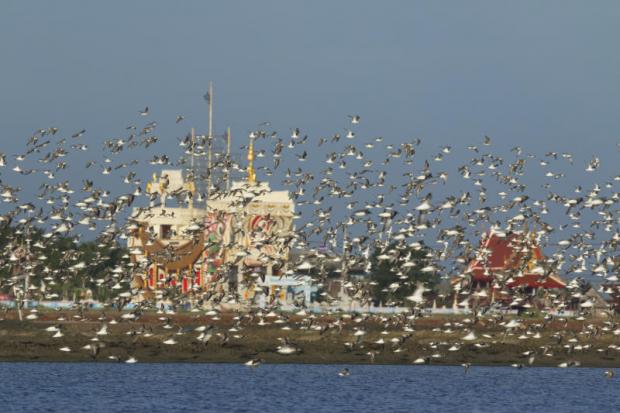 A large flock of migratory birds flutter their wings as they arrive on a mudflat to escape the frigid weather in Russia. The birds — which include several rare species — call Thailand's coastal areas their home from October to March every year.

Thattaya Bidayabha, conservation manager of the Bird Conservation Society of Thailand (BCST), said the society is closely working with government agencies such as the Department of National Park, Wildlife and Plant Conservation (DNP), the Department of Marine and Coastal Resources (DMCR), the Office of Natural Resources and Environmental Policy and Planning (ONEP), UNDP, the Spoon-billed Sandpiper Task Force, and local communities to conserve shorebird wintering areas.

"The story of Lime No.5 has struck a chord with us because it shows how critically important it is for us to protect the existence of terrestrial species like these birds and the abundant natural resources Thailand has to offer these animals.

"We are proud to support Thailand in this and other related efforts to protect the nation's rich biodiversity for future generations," said Lovita Ramguttee, interim resident representative of UNDP Thailand.

Such multi-pronged efforts serve as a model for how different parties can come together to accomplish a common cause to support various flora and fauna. This also serves the goal of helping Thailand achieve its Sustainable Development Goals, especially goal No.11 on sustainable communities, Goal No.12 on responsible production and consumption, and Goal No.15 on life on land.

Both birds and people have a vested interest in the rich coastal resources being maintained and preserved. Shorebirds are safe and unmolested in Thailand, which is one of very few countries in Asia where sightings of spoon-billed sandpipers are almost guaranteed, said Philip D Round, an ornithologist at Mahidol University.

The presence of shorebirds, also known as waders, does not interfere with the lives or livelihoods of coastal salt-farmers or inshore fishermen, he added.

Salt-farming and sustainable inshore fisheries that do not damage biodiversity should be supported by local authorities and all stakeholders, not only to conserve and protect the inner Gulf as a natural buffer against flooding, but also to help save the sandpipers and other migratory shorebirds, Mr Round said.

"These small birds deserve the right to live and breed freely, too, and they need to be conserved," he added.