An increase in crane accidents requires an overhaul in the law and safety protocols to avoid future mishaps.

over she goes: A crane collapse accident in November 2016 at the construction of Shrewsbury International School's City Campus in the Rama IX area. (Photo by Patipat Janthong)

Living in cities like Bangkok poses unique risks from which rural dwellers are spared. For example, urban residents face the risk of being caged inside fire-stricken buildings or the possibility of an accident on mass transit.

Moreover, another risk comes from the construction of high-rise condominiums which requires the use of dangerous equipment such as a crane.

Recently, a few crane accidents in various areas of Bangkok have been reported.

Between 2016-2019, 11 accidents were reported -- a rate of at least three per year -- according to the Engineering Institute of Thailand (EIT).

The latest accident, on Jan 23, happened at the construction site of a high-rise condominium on Rama III when a crane as high as a 10-storey building collapsed. Five construction workers lost their lives.

Almost half of all crane accidents take place during a crane's installation. According to inspection from the EIT, human error is often the root cause. Over 90% of crane collapses happen because of some defect during the installation or dismantling process.

The latest accident on Rama III was also the result of a mistake that took place during the crane's installation. Nature, such as the wind or soil structure, contributes to mishaps in less than 10% of all accidents. 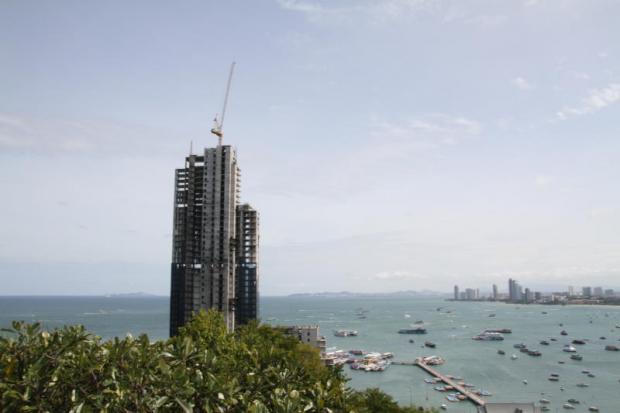 hasty departure: A construction crane has been left at this abandoned construction site in Pattaya since 2014, causing safety concerns among residents. (Photo by Chaiyot Phupattanapong)

At present, there are 200 crane operators in the country and their operation is outsourced to local businesses, according to the EIT.

"Many operators often purchase second-hand crane from overseas and more than 30% of cranes have been in service for more than 20 years," says Wuthinan Patamawisut, president of EIT's Sub-Committee on Crane and Lifting Engineering.

These cranes, he said, are on their second legs and need to be replaced.

"Some operators do not even read the manual for the safe operation of the crane partly because guides are in English or because the manuals have been lost. Instead, most crane operators in Thailand rely on their experience," Mr Wuthinan said.

So, safety depends on the conscience and professionalism of contractors.

"If a contractor is responsible, it will hire an engineer who has knowledge in crane operation to supervise the site and hire operators with proper training. But if the contractor is not responsible, it's not uncommon to find workers or even the public living around the site, leading to a dangerous situation as cranes are heavy and any collapse in this situation can cause great damage," he said.

Since 1972, Thai laws have governed the safe operation of cranes.

The most commonly observed law is the municipal code on construction applied by local administration across the country, including the Bangkok Metropolitan Administration.

Under this law, operators must hire four people to work on a single crane. These four people comprise the operator, signalman, crane rigger and crane superviser. They must show credentials as proof that they have received adequate training.

But the reality is that officials do not have enough manpower to inspect all construction sites, Mr Wuthinan said.

So, people need to learn to protect themselves. "Both motorists and pedestrians must train themselves to look up and see whether the crane looks steady and upright. If the crane looks off-balance and unsteady, just stay away."

The government has tried to improve the safety standard of crane operations. Currently, the Ministry of Labour is drafting new ministerial laws to improve the labour standard amongst civil engineers. The law is expected to become effective sometime towards the end of this year.

However, the EIT found the draft to still be lacking and sent recommendations to the government to include two regulations, according to Assoc Prof Anek Siripanichgorn, president of the Civil Engineering Committee of EIT.

The first regulation will require crane operators to submit an operation plan for approval. 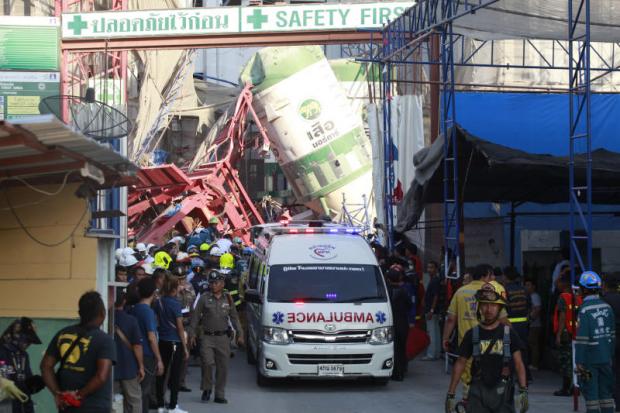 help on the way: Rescue officials at the scene of an accident at a Rama III high-rise condo construction site on Jan 23. (Photo by Pornprom Satrabhaya)

The second regulation concerns a training curriculum on the operation of heavy machines which pose a potential risk to public safety like cranes. Training courses must be approved by an official body such as the Ministry of Labour and training personnel must be certified by professional bodies such as the EIT.

Safeguards and better labour standards are needed as Bangkok plans to increase the number of high-rises in the city.

"Most areas in Bangkok have high rises and as the construction of more gets underway, changes will be needed to prevent future collapses to avert death and injuries," said Amorn Pimarnmas, secretary-general of the Council of Engineers.

Apart from improving the standard of labour and operation plan, the EIT said safety would be enhanced if the government classifies cranes as a "building" under the 1992 Buildings Control Act.

Currently, cranes, despite their gigantic structure, are treated as construction equipment.

If it was defined as a "building" under the 1992 Buildings Control Act, the contractor would be required to submit requests and plans before installation and dismantling.