Thailand has long condoned violence against women. Busayapa Srisompong, through her nonprofit organisation Shero, is fighting to change that

According to the World Health Organization, one out of three women experiences physical and/or sexual violence by an intimate partner at some point in her life. It's a widespread and silent epidemic -- especially in Thailand, where domestic violence is viewed as a normal part of society and culture.

Regularly blasted on local news headlines are gruesome and horrific acts of unjustified gender-based violence. Last year alone, we saw a man beating his girlfriend live on Facebook; a man arrested for beating his pregnant wife and mutilating her body; and, most controversial of all, a man murdering his newly wedded wife, in a fit of jealous rage, by pouring acid into her mouth while she slept.

Having witnessed the sheer number of gender-based-violence cases as well as being a survivor of abuse herself, human-rights advocate and pro bono lawyer Busayapa Srisompong has made it her mission to eliminate domestic violence and de-normalise violence in Thailand for future generations.

Shero, a nonprofit project she established in 2016, seeks to combat Thailand's deep-rooted cultural issues by providing free legal aid for violence survivors, educate new-generation and like-minded people about domestic violence, and empower survivors to become advocates of their own.

"At first when I started [providing advice], I never thought of doing a project," said Busayapa on the phone from her base in Mae Sot where she works with migrants in need. "It was a period of empowerment for myself."

Despite being a lawyer specialising in violence against women, Busayapa was herself in an emotionally and physically abusive relationship she couldn't get out of. Reaching a breaking point whereby she was beaten and collapsed on the floor, she finally mustered the courage to seek help from police, only to be rejected and sent back home in tears. 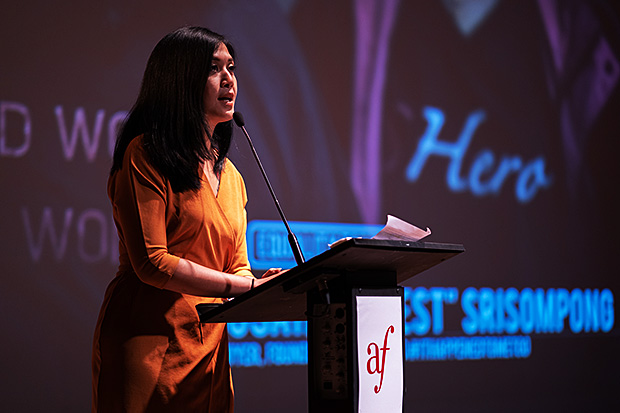 "I initially gave up and went home for about a week or two," she said. "In the end I went back, and this time I was ready. The law was in my hands, and I fought with the investigative officer who kept asking why I was there. He kept resisting for weeks until I told him that I would co-operate and give him all the information to make everything easier."

Going to the police station every night, police officers would still bombard her with snide remarks, telling her to get back with her boyfriend, as she was wasting their time with her case.

"I fought back," she said. "I told them with a stern voice, 'I understand that there are cases where the victim gives up, but cases like these are not OK. If he's still around he can hurt other people'. I explained to them what I felt and why I wanted this case to go to court. I didn't want to bully [my ex], but I want the court to rule that I've done nothing wrong, as it has impacted me mentally. Then the police started listening and understanding."

Winning the case, Busayapa then realised how incredibly hard it is for a woman -- even an educated woman like herself -- to get access to help when it comes to domestic violence. In addition to the normalcy of violence in Thai society, police officers -- who have a quota to close a number of cases a month -- generally reject domestic-violence reports, as the cases are rarely solved.

"After I faced everything, I felt that there are still many people who have no idea on how to proceed with the legal procedures," she said.

"Normal people who don't know wouldn't dare to go file a report. The [first] community [in Mae Sot] that I talked to, everyone had an experience of domestic violence. The approach I took was teaching them about law, and explaining about the legislation acts, and explain which areas in Mae Sot where they can seek help." 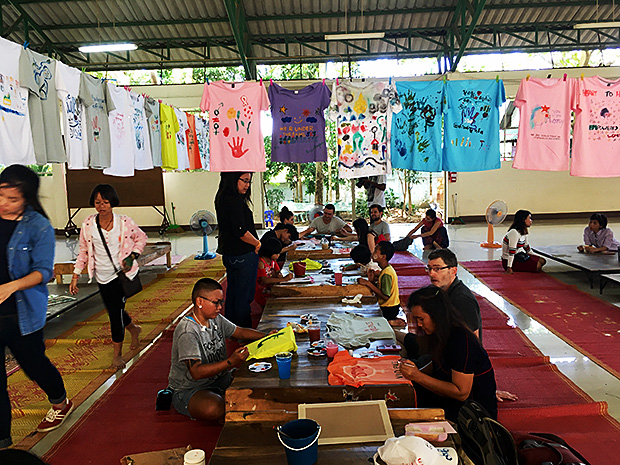 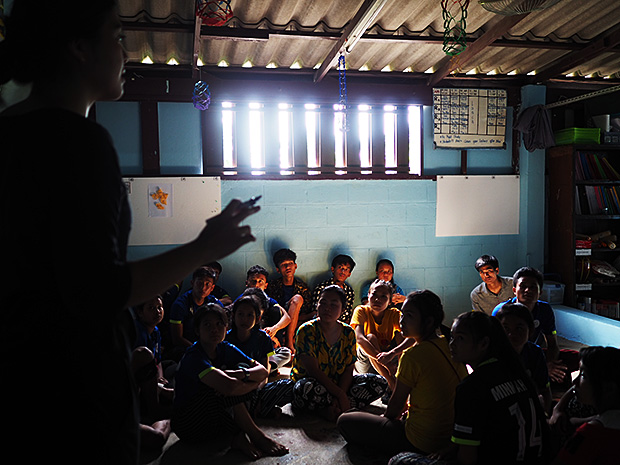 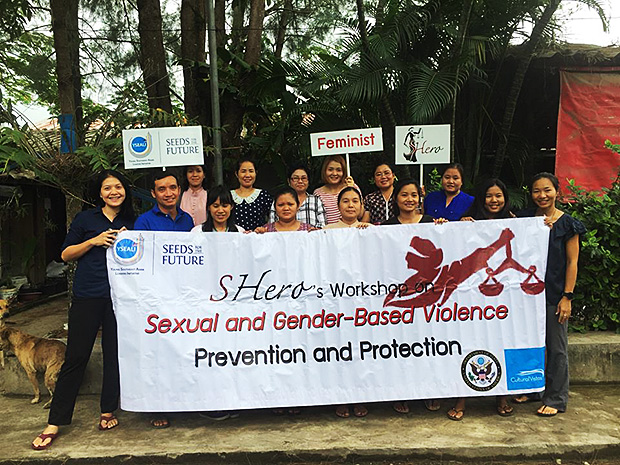 Busayapa Srisompong has been holding workshops and building support networks in the Mae Sot area.

During the initial stages, the women within the community wouldn't dare speak up about their experiences of abuse. It was only when Busayapa opened up about her own experience that they started mustering the courage to tell their story, eventually becoming advocates themselves. Busayapa kept organising talks in order to educate and empower women, eventually branching into doing other activities like art therapy for abuse survivors. Doing more and more activities, the police started taking notice and called her in for consultation and talks in communities, resulting in a network specialising in domestic-abuse cases.

"It wasn't just consulting," she said. "There's psychosocial support as well, where I tell them what to be aware of, how to get psychological support, and where to go."

Seeing Busayapa's personal growth and drive for change, a friend took to calling her a "Shero".

"This [word] really stuck with me because other people can do what I do," she said. "I believe that everyone, to some degree in their lives, has faced [violence], whether at school or at home, and if they are in the legal profession or social profession, they can become a 'Shero' and a hero to help their community. So slowly it formed as a project."

Opening up a Facebook page with her goals of wanting to eliminate and de-normalise gender-based violence and create advocates out of survivors, people started contacting her on their own, building an organic network of help.

With an official name, Busayapa gradually organised larger seminars and activities. She partnered up with the Thailand Institute of Justice (TIJ), holding her first Youth Forum last year. Attended by teenagers and young adults from all over Thailand, the forum utilised the concept of design thinking for participants to be aware and brainstorm ways to solve violence and abuse in different institutions, from school to the workplace. Starting a dialogue and conversation, she said, is also one of the ways to spread awareness and help solve violence.

Now, Busayapa plans to do much more with her three-year-old project. She wants to organise another Youth Forum in Mae Sot province for people to learn how incredibly difficult it is for marginalised people to access legal help. She wants to structure Shero to have long-term impact by finding people and entities that can recreate her forums and activities. And she wants to find volunteers and an effective network of help all over the country to help any victim in need.

"Finding volunteers in every province is going to be hard," she said. "It's about the government as well. Don't they have people [from the One Stop Service Crisis Centre] in every province already? They should make these people more effective. But because it's Thailand, it's never effective. So that's why I created a Youth forum, for people from many provinces to network."

"If you want to solve it, you have to fix the culture," she said in an interview with the Bangkok Post last year. "You have to fix it with kids from the new generation. When I work with them, they have the knowledge to work with their own communities and empower them, then a network is created. One day, the culture of violence will disappear, or at least decline in later generations. I don't hope for anything anymore with the older generation. Their boat has sailed. But with the new generation, the boat can still turn back. It's something that [pushes me] to work with vulnerable groups."