A 50-year-old som tum (papaya salad) vendor who works outside some flats in Din Daeng in Bangkok was stunned when her medical check-up three years ago revealed she suffered from high blood pressure, which prompted doctors to advise her to urgently cut back on her sodium intake. 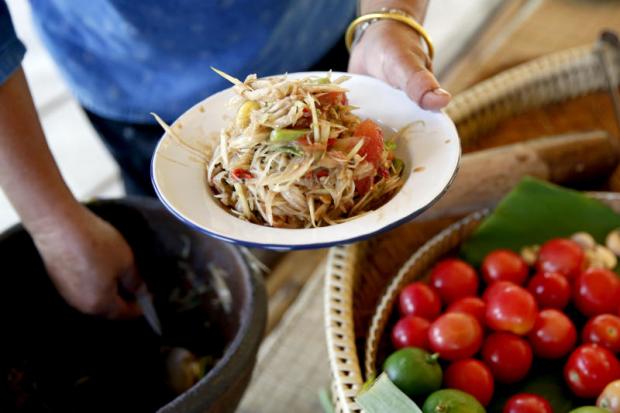 Jae Da ("Linda") said that earlier in life she developed a penchant for strong-flavoured and spicy food, including som tum, which led her to become a street vendor but also took her to hospital.

Pla ra, or fermented fish, is a traditional condiment believed to have originated in the Northeast that is used as a staple ingredient of som tum. Pla ra is marinated in salt to add flavour but this can be harmful if consumed in excessive quantities.

After the health check, Linda followed the doctor's advice. She now takes it easy on the salt -- both for herself and her customers. 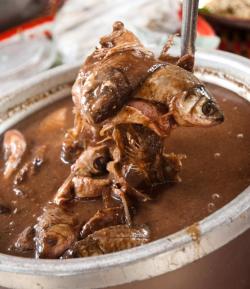 Pla ra is sometimes known as liquid salt, illustrative of its high sodium content. Eating too much of it can trigger a host of illnesses including kidney disease, heart disease and high blood pressure.

Pissamai Ekkantrong, a researcher at Mahidol University's Institute of Nutrition, said pla ra is a product of local wisdom in food preservation. A variety of fish, mostly found in rivers and canals, serve as its basic component.

Runaway demand for pla ra often fails to keep pace with supply, given that it can take over a year to make. Some producers add seasoning powder and other additives, which further boost the sodium level.

Surveys show that a standard plate of som tum soaked in boiled pla ra with salted crabs contains nearly 3,000 milligrammes of sodium, well above the daily limit of 2,300mg recommended by the American Heart Association.

Simply put, a single plate of som tum with pla ra can potentially overfill a person's maximum daily intake on salt, she said.

"You always see seasoning powder added to dishes at restaurants. This pushes a person's sodium intake through the roof," said Ms Pissamai, who also is also leading a research and development project into pla ra.

She said her research team has been tasked with finding practical ways to keep the amount of salt used in making pla ra within safe levels, but without compromising on taste.

The team removed a specified amount of common salt in pla ra and substituted it with potassium chloride. Laboratory experiments confirmed the substance tastes more or less the same, with germ-preventive properties intact, according to Ms Pissamai.

"The 'new' pla ra was then given to people in rural communities who regularly cook with the condiment. The result was they thought it smelled, looked and tasted the same but with half as much salt," she said.

The newly concocted pla ra was also free of germs and worms.

According to the researcher, her team is spending the rest of the year developing a recipe for making lower-sodium pla ra.

"Commercial factories want to get their hands on this recipe so they can manufacture and export it. But we want to keep it for local people, particularly those in the Northeast, and community enterprises," Ms Pissamai said. 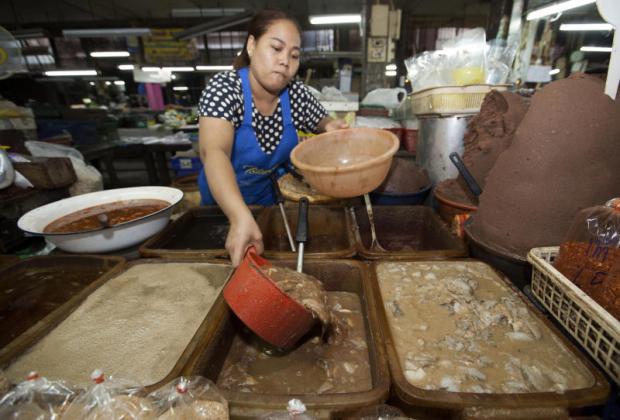 A vendor scoops up some pla ra as she poses for a photo at Bang Khae fresh market in Bangkok. The authorities have issued new production standards to improve the quality of this traditional seasoning. Pawat Laopaisarntaksin

"It makes more sense to promote the product extensively in the domestic market first," she added.

Linda said she buys her pla ra from Din Daeng Market before boiling it. She cooks pla ra in her own special way.

Like other products for human consumption, pla ra should carry a label showing how much salt is used, among other nutritional information, she said.

According to the vendor, many producers speed up the process of fermenting pla ra, from a year to within four to six months, by making it even saltier.

They blend in additives, such as seasoning powder and shrimp paste, which are already very salty, without considering the health implications, she said.

"This would be in the best interest of consumers," she said. "It would bring down people's risk of falling ill from eating too much salt and save on medical bills."

She said she made a point of trying to convince her regular customers to leave the table salt alone, adding it wasn't easy for them to "kick the habit". 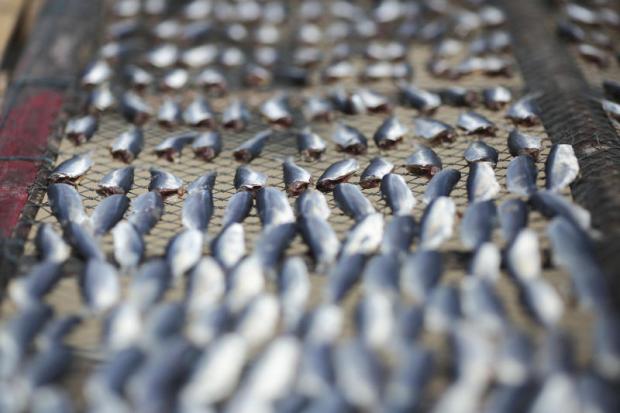 Fish pickled in salt are sun-dried before they are sold to customers. Patipat Janthong

Most som tum vendors refuse to change their recipe out of fear the taste would change if less salt were used, and they would lose customers, she noted.

Surasak Kantachuvesiri, chairperson of the Thai Low Salt Network, said many Thais ignore the danger of excessive salt intake -- at their own peril.

The number of people in Thailand who need dialysis climbs 20% a year, which should come as an important reminder to everyone that they should not consume more than a teaspoon a day of salt a day, or three teaspoons of fish sauce, according to Mr Surasak.

He insisted people's taste buds can adapt to less salt, given the chance. The trick is to reduce it gradually, he said.

People can start by cooking dishes that are 10% less salty, and work their way down slowly over several weeks. That gives the taste buds time to adjust.

Mr Surasak said studies have shown that many elderly people in the Northeast get most of their sodium from fish sauce and table salt.

One study he cited indicated that Thai people eat about 10 grammes of sodium a day on average, double the safe threshold.

"Old habits can be your worst enemy when it comes to reducing your sodium intake," said Dr Pairoj.

"To do this successfully, everyone has to be on board, be they consumers, food manufacturers or vendors."