Her body, her choice

Each year, around 20 million unsafe abortions are carried out globally, with roughly 80,000 maternal deaths reported. That's nine deaths every hour. According to the World Health Organization (WHO), 95% of these occur in developing countries.

In Thailand, the number of unsafe abortions per year is believed to be as many as 200,000, killing dozens and maiming tens of thousands with long lasting medical complications.

Abortion in Thailand is not just a health issue, it is a social one as well. One of the most disturbing cases that serves to highlight the scale of the problem was the discovery several years ago of over 2,000 foetal remains at three temples. The incident revived the national debate surrounding abortion. But there remains deep division, with some arguing that abortion is a matter of women's reproductive rights, and others insisting that it should not be encouraged under any circumstances.

At the forefront of the abortion reform movement is Prof Dr Kamheang Chaturachinda, who recently organised the 4th international congress on women's health and unsafe abortion in Bangkok, titled "Universal Access To Safe Abortion: We Trust Women".

Dr Kamheang, a gynaecologist, has seen the damage that unsafe abortions can do up close. The night before he was due to retire, he was on duty at Ramathibodi Hospital when he was called to attend to the urgent case of a college student who had just suffered a botched abortion. He spent four hours saving her life.

Dr Kamheang says that the factors that influence whether women have access to safe abortion include the healthcare system, technology, women's health, laws, attitudes, religion and culture.

"Women's reproductive rights include the right to have access to safe abortion services when required, access to quality reproductive health services, deciding on the number of children she wants and the right to birth control and freedom from forced sterilisation," he explained.

According to Thai law, abortion can only be carried out legally by registered physicians when there are serious concerns over the physical or mental health of the mother. This includes victims of rape. Women can also terminate their pregnancy if the foetus is found to have serious disabilities or genetic disorders. 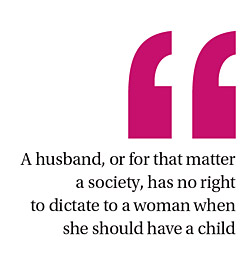 "Despite this, doctors still have a lot of reservations about agreeing to carry out abortions," Dr Kamheang said. These misgivings often stem from the belief that abortion is taking -- rather than saving -- a life, a view often promoted by their professors at medical school.

"During my days as a professor, I always told my students to separate faith and duty. You are sworn professionally to provide the best care for your patients," he said.

Patriarchal attitudes constraining female sexual expression also stifle discussion of the issue. With the stigma attached to abortion and the hesitance of some physicians to get involved, a significant number of women find themselves in an impossible situation, and in desperation, they terminate their pregnancy by any means available to them.

"Twenty percent of unsafe abortions are teen pregnancies," said Dr Kamheang. "Many women are not aware of their rights and are in a vulnerable position when they are up against a physician who refuses to support their decision.

"Being traditionally subservient makes it all the more difficult for Thai women to stand up for their right to start a family only when they are ready. A husband, or for that matter a society, has no right to dictate to a woman when she should have a child."

Dr Kamheang said that abortion should no longer be considered a taboo word.

"Today general practitioners can also conduct abortions, because it has become a much more simplified and safe method," he added.

Practitioners are increasingly aware of the need to offer safe abortions before more women add to the statistics of botched abortions. Dr Kamheang also feels that society can play an equally crucial role in addressing this issue. Television shows, for instance, can play their part by showing audiences how detrimental backstreet abortions can be to the health of women.

"Mothers, in particular, have to teach their daughters of their rights, so they do not get pressured by anyone to start a family until they feel it's time. A loving husband will support her decision," he concluded.