Most passersby walking under the bustling Thonglor BTS station and past the mufflerless tuk tuks speeding by will probably miss this place. Hidden behind a row of newspaper stands and food carts sits what appears to be an unassuming Bangkok cafe: The Green Lantern.

While the first thing to come to mind might be a famous Marvel superhero, the cafe’s owner, 40-year-old Watjanasin Charuwattanakitti, associates it with something very different; the green lanterns that Thai brothels used to leave outside of their doors to indicate that they had paid taxes, before the profession was outlawed in 1960.

“They call it the red lantern district, because they see it in the movies. But in Thailand actually, we used the green one,” said Mr Watjanasin.

The Green Lantern cafe plays host to the Museum of Sex -- an exhibit that opened in December, devoted to the history of eroticism and the sex industry in Thailand. 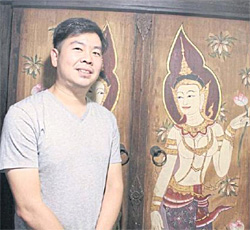 Walk in and you’ll see pornographic magazines, recreations of cave art, and palad khik -- phallically-shaped amulets that are often placed in stores or restaurants to bring in more customers.

You’ll also find a glass case full of sex toys, paired with four signs that read: “Illegal” -- a testament to Mr Watjanasin’s liberal views on the legalisation of sex work and paraphernalia.

“I believe that sex toys should be legal,” he said. “I think it could save a lot of problems. For the prostitutes, I want to support them to be legal too. They have the right to work. It’s a professional job, it’s been in the world for a long long time.”

His views are part of why he’s devoted part of his exhibit space to describing the history of prostitution in Thailand, and Bangkok in particular.

“Because we have a bad economy in the village, a lot of people don’t have any way to make money,” he said. “They know that their daughters can help them. So their daughters come to Bangkok and work in the go-go bars, and when they get money, they send it back to their parents to support them.”

In his eyes, the sex industry is a greater part of Bangkok’s past -- and present --than many people are led to believe. It’s also intertwined with age-old symbolism. One of the most common examples of this is the image of the mortar and pestle, which, he says, is the reason why some prostitutes set up papaya salad, or som tam carts in the city in the evenings.

“If you go to Hua Lamphong around 7 or 8pm, you’ll see a lot of women selling papaya salad. But, actually, they’re prostitutes. But it’s very dangerous because actually they are freelance, no one checks their health,” he said. 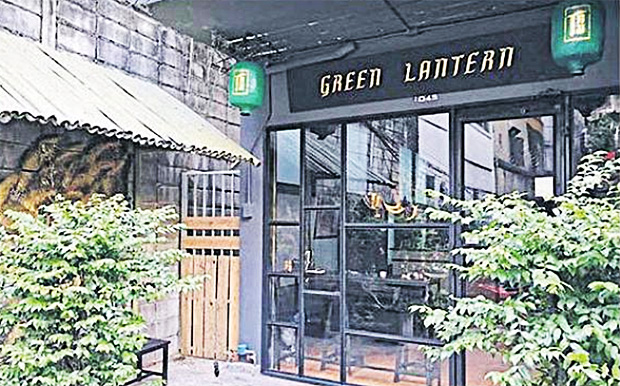 Hanging out: Green lanterns hang outside of the entrance to the Green Lantern cafe, which also houses the Meseum of Sex.

He worries that the current lack of regulation puts both sex workers and their clients in danger, particularly because they lack healthcare. “If we make it legal, they will be proud. They will work like normal people.”

He also believes that tax money could be used to develop more infrastructure.

“You know, a long time ago, prostitution was legal in Thailand,” he said, pointing to a black and white image of Charoen Krung Road. “We used their tax dollars to build the roads.” 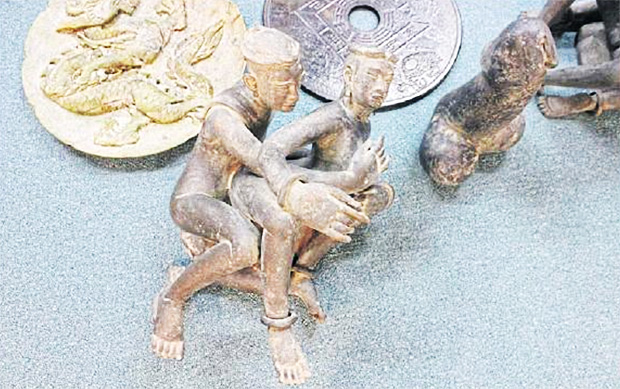 Looking for luck: Kamavijitra's collection includes over 500 pieces, ibncluding this sculpture, which Mr Watjanasin says is used to bring rain and imrpove crops. 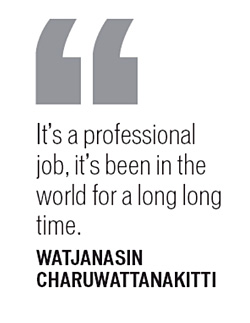 He eventually collected so many pieces that there were too many to keep in the house, so he decided to make the collection available to the public and moved his pieces to the condominium building which he owns on Soi 38. To see the collection, visitors have to make an appointment.

“This shows a glimpse of Thai life in the past. You can see the pictures of people making love on the walls in temples. In the past, they were comfortable with this,” he said.

He and his son have visited temples and villages across the country in search of new pieces to add to their collection. They’ve also travelled as far as New York and Hong Kong to visit sex museums across the globe, in hopes of finding inspiration.

“They think it’s dirty but it’s not. It’s the nature of life. It’s about being a human being,” Mr Uthaiphon said.

As for Mr Watjanasin’s mother, “Well, she didn’t like it at first, but now she just ignores it,” he said.

You can buy a drink at the Green Lantern cafe before entering the Museum of Sex, but make sure to make an appointment ahead of time. The entrance fee for Kamavijitra is 500 baht.

The Green Lantern is close to BTS Station Thong Lor. Take Exit 3 then walk in the direction of Soi Thong Lor (Sukhumvit 55).

Thailand's policy interest rate will have to rise but the timing will hinge on the monetary policy committee's view with the economy growing below its potential and the recovery facing uncertainty, the Bank of Thailand (BoT) board chairman said on Wednesday.