Scheme to give female inmates jobs pays off

Female inmates try their hand at weaving at Chanthaburi Central Prison. Inmates nearing their release are being given occupational training so they can make a living after they leave prison. (Photo courtesy of Thailand Institute of Justice)

Female inmates are reaping the success of vocational training prior to their release, part of a project to ease unemployment and cut crime, according to the Thailand Institute of Justice (TIJ).

The project has been made possible thanks largely to the Bangkok Rules, formally known as the United Nations Rules for the Treatment of Women Prisoners and Non-custodial Measures for Women Offenders, adopted by the UN General Assembly in December 2010.

The TIJ was established in 2011 to help implement the Bangkok Rules in Thailand aimed at filling a long-standing lack of standards providing for the specific characteristics and needs of women offenders and prisoners.

Historically, prisons and prison regimes have almost invariably been designed for a majority male prison population -- from the architecture of prisons to security procedures, health care, contact with relatives, work and training, according to the Penal Reform International. 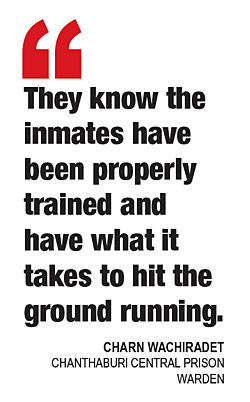 The rules give guidance to policy makers, legislators, sentencing authorities and prison staff to reduce the imprisonment of women, and to meet the specific needs of those jailed.

The TIJ came into being after the Enhancing Lives of Female Inmates Project was launched at the initiative of Her Royal Highness Princess Bajrakitiyabha.

The princess worked in collaboration with legal experts and human rights advocates in drafting the Bangkok Rules, which were later recognised by the UN and adopted as guidelines for the treatment of female inmates.

Adhering to the Bangkok Rules, the Corrections Department has put in place a project specifically to prepare female inmates for life after prison. Qualified inmates, meaning those who are well-behaved and have served more than three-quarters of their sentence, are offered occupational training. Some are allowed to work under supervision outside of the prison.

Chanthaburi Central Prison has been chosen as a model for the occupational training programme. It currently houses 2,200 male and 295 female inmates.

Charn Wachiradet, the prison warden, said the so-called "Chan Model" has roped the local business community into the programme, which has reformed many female inmates.

He said a corner of the prison has been transformed into a library for inmates. A room has also been built where they can learn musical instruments to make a living after they are released.

The inmates need early preparation as they receive training to acquire professional skills to get a job after they have served their sentences.

"This is where local businesses come in. They know the inmates have been properly trained and have what it takes to hit the ground running once they leave prison," Mr Charn said.

One of the training venues is Ruen Chan Land, a restaurant that specialises in offering Thai cuisine including local delicacies such as kaeng moo chamuang (pork curry with Chamuang leaves) and sen chan pad poo (crab stir-fried noodles).

Female inmates are taught to cook by experts from Rambhai Barni Rajabhat University in Muang district of Chanthaburi, as well as the provincial skill development office.

The central prison also runs a coffee shop called "Inspire" where customers are waited on by specially trained inmates, who say the programme has groomed them for reintegration into society.

The inmates get to keep the income they make, and the savings will give them a head start after they have finished serving their time.

"Companies and shops can register to let us know they wish to recruit the trained inmates. The skills we provide are suited to the demands of the labour market," Mr Charn said.

The prison chief said the training and jobs help to restore convicts' sense of self worth, which helped shrink the number of recidivists from 6% of those discharged to just 2%.

At the same time, the unemployment rate among released inmates has dropped from 25% to 5% since the Bangkok Rules were enforced, he said.

"Ploy", 23, an inmate who was jailed on a drug charge, is now busy learning to cook at Ruen Chan Land. Ploy, who has five months left of her sentence, rustles up 20 dishes a day along with the other trainees.

Having spent a few weeks behind bars for operating a gambling ring over a decade ago, he said he understands their plight and the paucity of opportunities that await ex-convicts when they get out.

Hassarit Hatthawijit, manager of Chan Den terra cotta tile factory, said his company has employed 40 inmates since 2017. They get a daily wage and are trucked in from the prison and back every day.

"We don't feel any danger being around them. On the contrary, we feel confident that we're doing our part to help people redeem themselves," Mr Hassarit said.