When the curtain fell on Dusit Zoo last year, many questioned where the menagerie of wild and exotic animals at Thailand's oldest and most popular zoo would be sent. 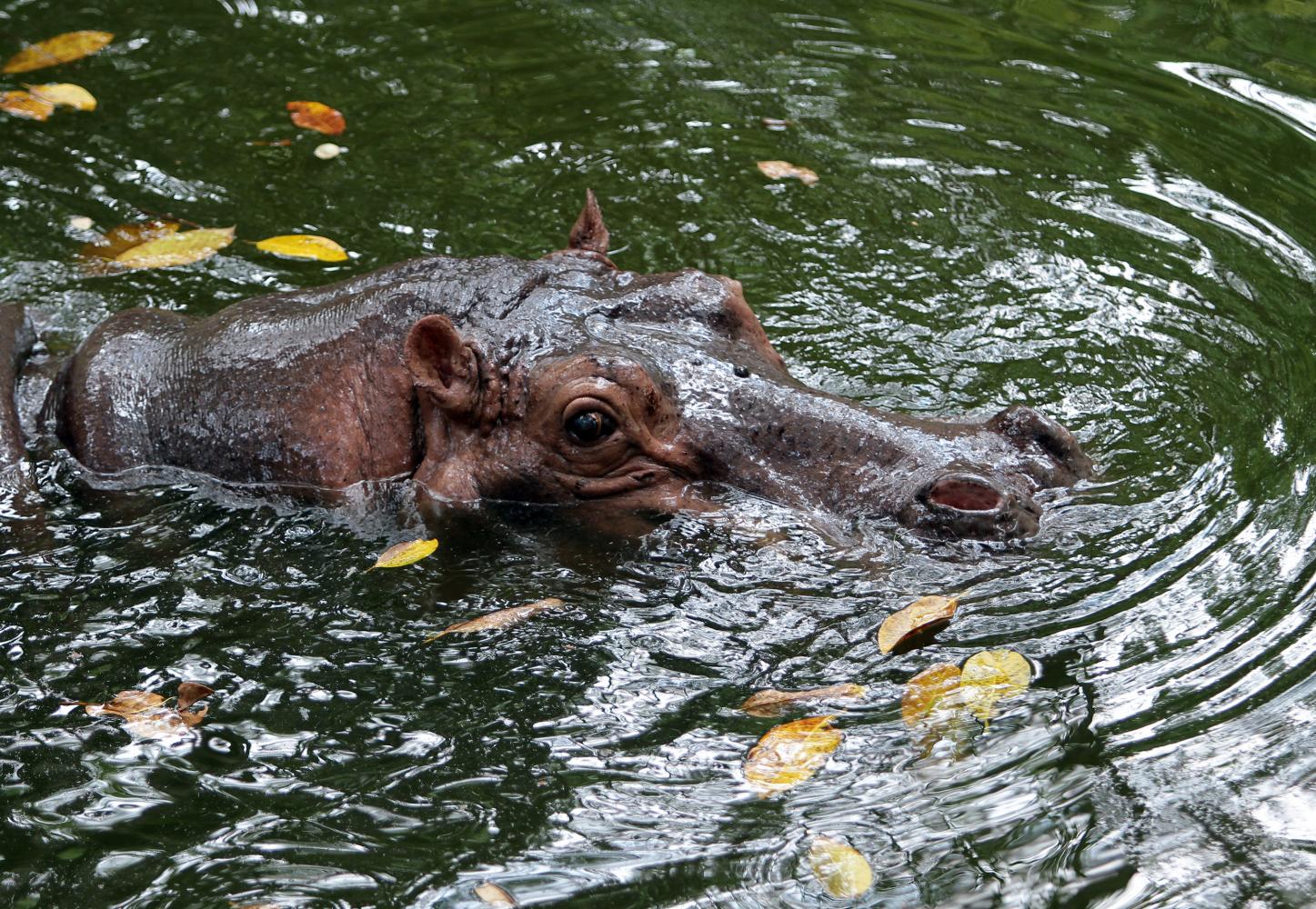 'Mother Mali' (Mae Mali in Thai), a popular hippo and one of the superstars of the closed Dusit Zoo, immerses herself in a pond before lurching out of the water to munch on the green feeds at her new home, the Khao Kheow Open Zoo, in Chon Buri.

One of their new homes is Khao Kheow Open Zoo in Chon Buri, where 141 animals from 32 species have been sent.

For the staff in charge of their relocation, saying goodbye to Dusit Zoo jerked quite a few tears, while rehousing the animals has proven to be a challenge.

Among the "superstars" who have migrated to Chon Buri is "Mother Mali" (Mae Mali in Thai), the hippo who became a household name and has remained so for generations.

Meanwhile, a pair of giraffes -- one going by the ominous name Bin Laden and the other "Sweet Eyes" (Ta Wan) -- have secured a new residence in the plush green enclosure of an open zoo in Sri Racha district.

The arduous task of relocating all 897 animals at Dusit Zoo to six state-owned zoos and one elephant centre in northeastern Surin province took four months after the project kicked off on Oct 1. Small animals were the first to be moved.

According to the Zoological Park Organisation (ZPO), which falls under the auspices of the Royal Patronage of His Majesty the King, only one elephant went to the camp, while the others were sent to various provinces.

The ZPO said 11 animals were transported to Chiang Mai Zoo some 700 kilometres away in the North; 27 to Songkhla Zoo over 900km to the South; 111 to Khon Kane Zoo, about 500km northeast of Bangkok; 236 to Ubon Ratchathani Zoo in the lower Northeast; 370 to Nakhon Ratchasima Zoo, also in the Northeast; and 141 to Khao Kheow Zoo.

Adapting to the new environment at the Khao Kheow Open Zoo has proven a breeze for Mae Mali, who is often spotted lumbering into a pond to beat the sweltering midday heat.

"She looks lively and has adjusted well to her new home," said one visitor on the day Bangkok Post toured the zoo. 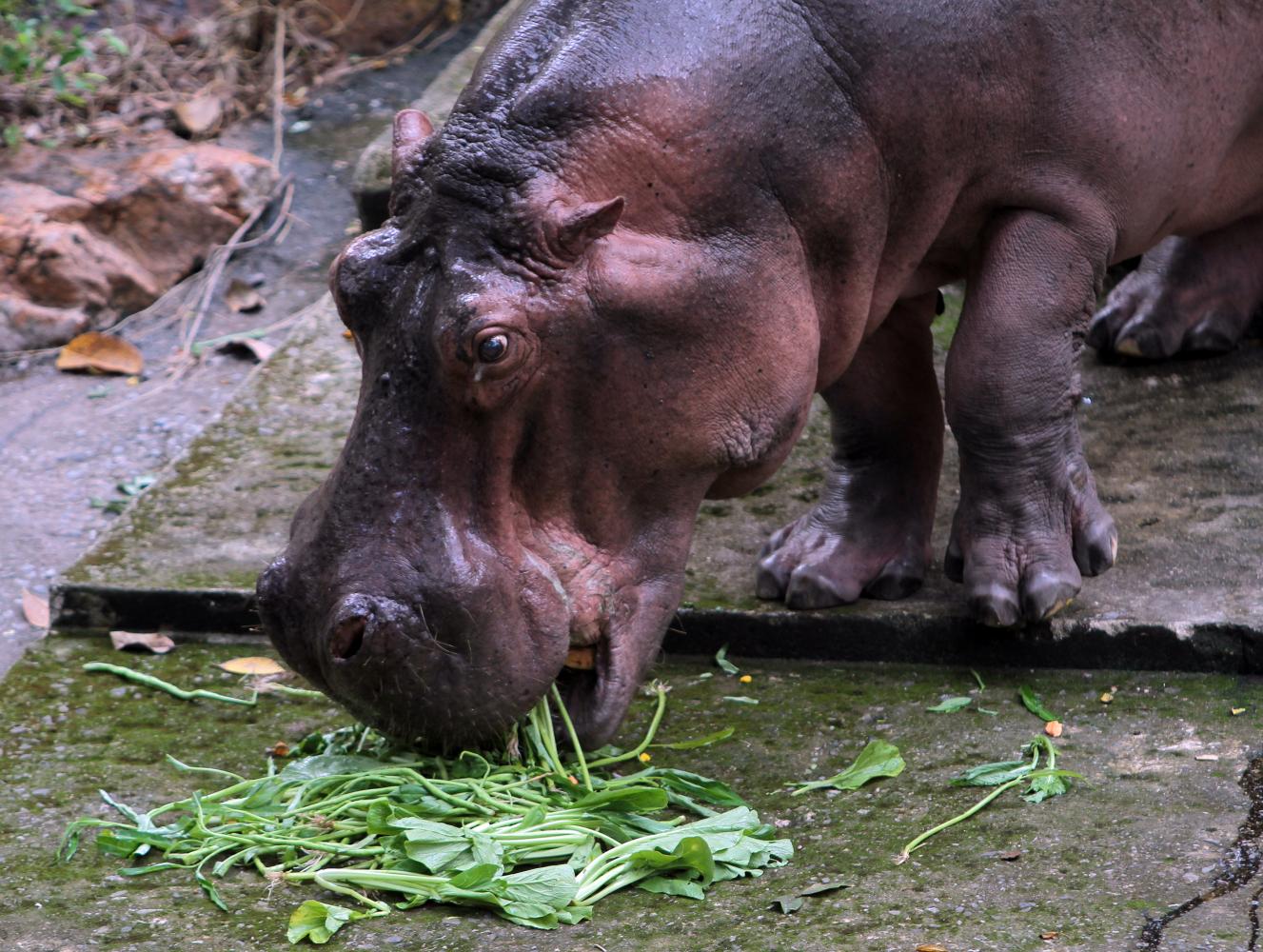 Mae Mali shares a large enclosure with two other hippopotamuses. However, their fierce territorial instinct has made it necessary to erect two concrete walls between them so they can enjoy some privacy without coming into conflict.

To keep a lid on their aggression nature, each hippo requires its own clearly designated space, but they can still eyeball one another from a distance.

"She's adapting better than I expected. She eats well and is enjoying her newfound space. The enclosure is 10 times bigger than what she was used to at Dusit Zoo, while her new pond is five times bigger," said Visit Arsaithamkul, the assistant director of Dusit Zoo.

At the ripe old age of 52 years and seven months, Mae Mali was Dusit Zoo's oldest hippo. It received the now-celebrity "river horse" from Tilburg Zoo in the Netherlands in 1967 when she was only a year old. She has since produced no fewer than 14 offspring.

Six of Mae Mali's calves are now being raised at Khao Kheow Open Zoo; one was given to a zoo in Malaysia and another to a zoo in Laos. As her family has grown, Mae Mali now also has a "niece" and "nephew".

She left Dusit Zoo for the last time in the early morning of December 18 for a three-hour trip to her new home. Her 15-year old nephew, Tua Daeng, was moved to Khao Kheow Zoo a month before she arrived.

Mr Visit said the zoo spent two months familiarising Mae Mali with the experience of being inside a small moving container before she hit the road. She was trained to stay calm in the dark confines of a mobile pen due to fears she could become agitated during her upcoming road trip.

Zoo staff started by placing food inside the pen to lure her inside. Initial attempts failed but gradually they won her trust -- or her appetite got the better of her -- and Mae Mali became more cooperative. 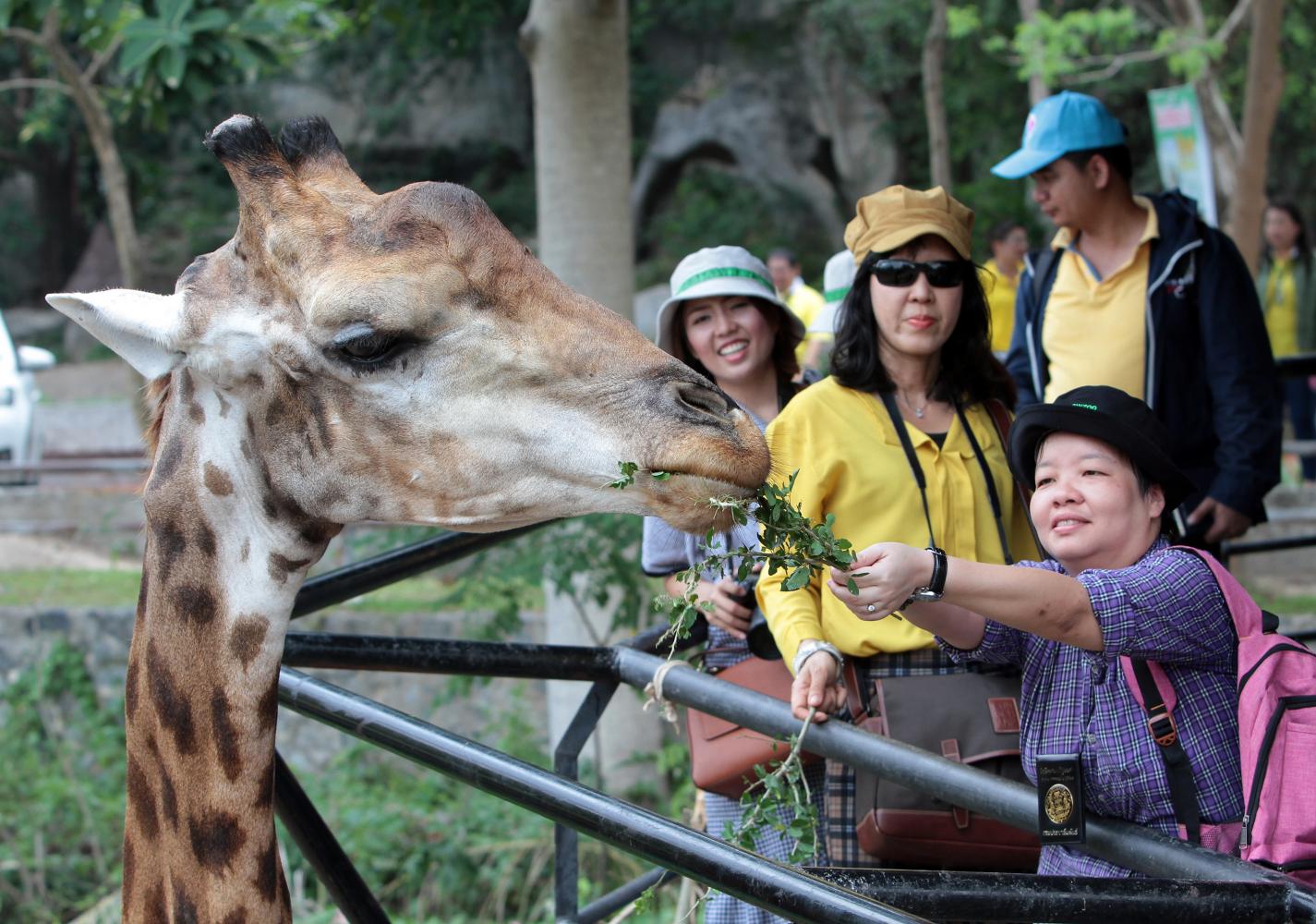 Visitors to the Khao Kheow Open Zoo enjoy their time feeding giraffes relocated from the Dusit Zoo, including the pair — one going by the ominous name Bin Laden and the other 'Sweet Eyes' (Ta Wan).  photos by Tawatchai Kemgumnerd

Mr Visit said the zoo's vets decided against administering an anaesthetic to make her more docile due to the risk of her potentially regaining full consciousness midway through the journey and causing mayhem and self-injury.

Staff also found it necessary to douse her with water regularly inside the pen as her skin dried quickly due to the prolonged exposure to the open air. Maintaining a healthy level of skin humidity is also known to reduce stress in large animals of this kind.

A large water pumping unit was set up inside the vehicle to ensure Mae Mali stayed cool and was adequately hydrated. A specialist vet was constantly by her side to check on her condition and take her body temperature.

Sompong Sawatnum, the animal's caretaker, said Mae Mali has settled comfortably into the open zoo and regularly hits the pond, which he interpreted as a positive sign.

"To start with I worried she would get homesick and may not be able to adjust," he said, adding such fears proved unfounded.

It took almost five months for the last animal to leave Dusit Zoo, longer than originally estimated. A major obstacle came when Ta Wan refused to budge, despite numerous attempts to coax her into the mobile pen.

She finally did so of her own volition and it was game on.

Her mate, Bin Laden, was more obliging so he arrived at the open zoo in January. Owing to the giraffe's towering height -- nearly five metres -- the Metropolitan Electricity Authority (MEA) was roped in to temporarily remove some of the power lines along Bangkok's roads to facilitate his journey.

The mobile pen for the giraffes had to specially designed to keep the animals locked in a specific position so they could pass under all the flyovers.

"The relocation plan had to be well-managed and precisely executed. We rehearsed beforehand to eliminate any chances of making a mistake," Mr Visit said.

"The operation proceeded as planned. No animals were hurt during the transportation," he added.

The ZPO decided to close Dusit Zoo. The authority is now building a larger replacement on 300 rai of land donated by His Majesty the King in Pathum Thani.

This is based on the concept of a "green community" and aspires to be the best zoo in Asean -- no mean feat considering rivals like the world-famous Singapore Zoo set in a rainforest environment.

Some of the relocated animals will find permanent homes in Pathum Thani when the zoo is finished, and hopefully Mae Mali will get to join them. 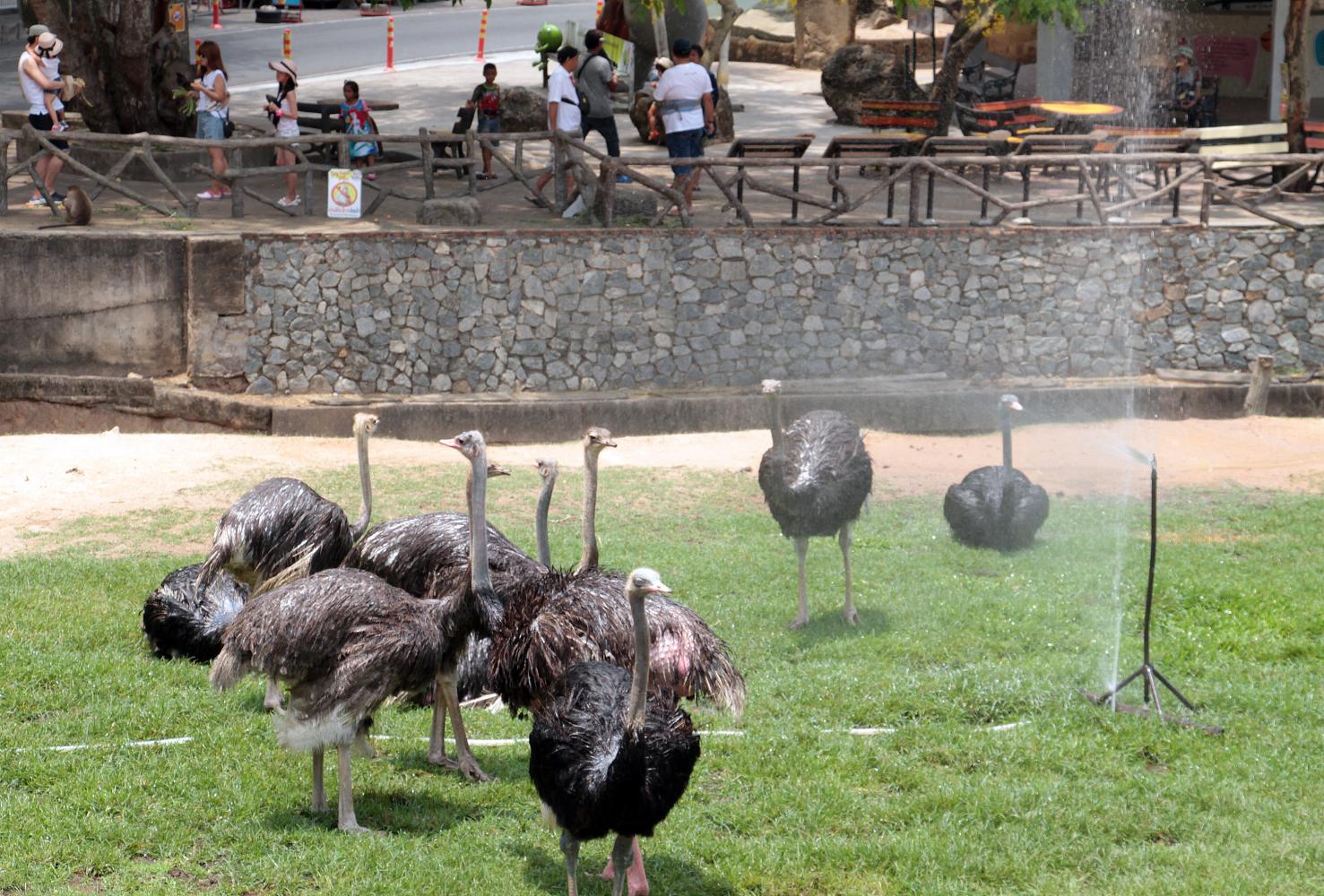 Some animals such as the ostriches roam free in parts of the open zoo's grounds. A sprinkler is set up to provide a much-needed respite from the scorching midday heat.