A day at a start-up office spins out of control when an ad for a skin-whitening product goes viral for the wrong reasons. (Photos by Helen Murray)

Nana Dakin is a familiar name on the Thai theatre scene. The member of B-floor Theatre is known for her intelligent and sensitive pieces of physical theatre that deal with such issues as identity, migration and violence.

The Thai-American director-performer left Bangkok in 2015 to pursue a master's degree in directing at Columbia University in New York City. There, she met Anchuli Felicia King, a Thai-Australian student who was studying dramaturgy in the same programme. Just last week, exactly one year after their graduation, White Pearl, written by Felicia and directed by Nana, premiered at the Royal Court in London. The dark comedy received a 4-star review in The Guardian, where it was also compared to Caryl Churchill's Top Girls.

White Pearl revolves around a group of Asian women of different ethnicities and upbringings at a cosmetics start-up company. When an ad for their latest skin-whitening product is accused of racism and goes viral, the women are forced to do damage control and face their own prejudices and a host of ethical questions.

How did the collaboration between the two of you come about?

Nana: We met in New York City in 2015 in our first year at Columbia University. We were both so surprised and delighted to meet another theatre artist of mixed Thai heritage! We became friends and worked together on a number of assignments and projects that year. In the summer of 2016, we moved into an apartment together with two other friends. That was the summer Felicia wrote the first draft of White Pearl. When she showed it to me, I loved it, and we immediately set about organising a staged reading of it. That was the beginning of our collaboration. 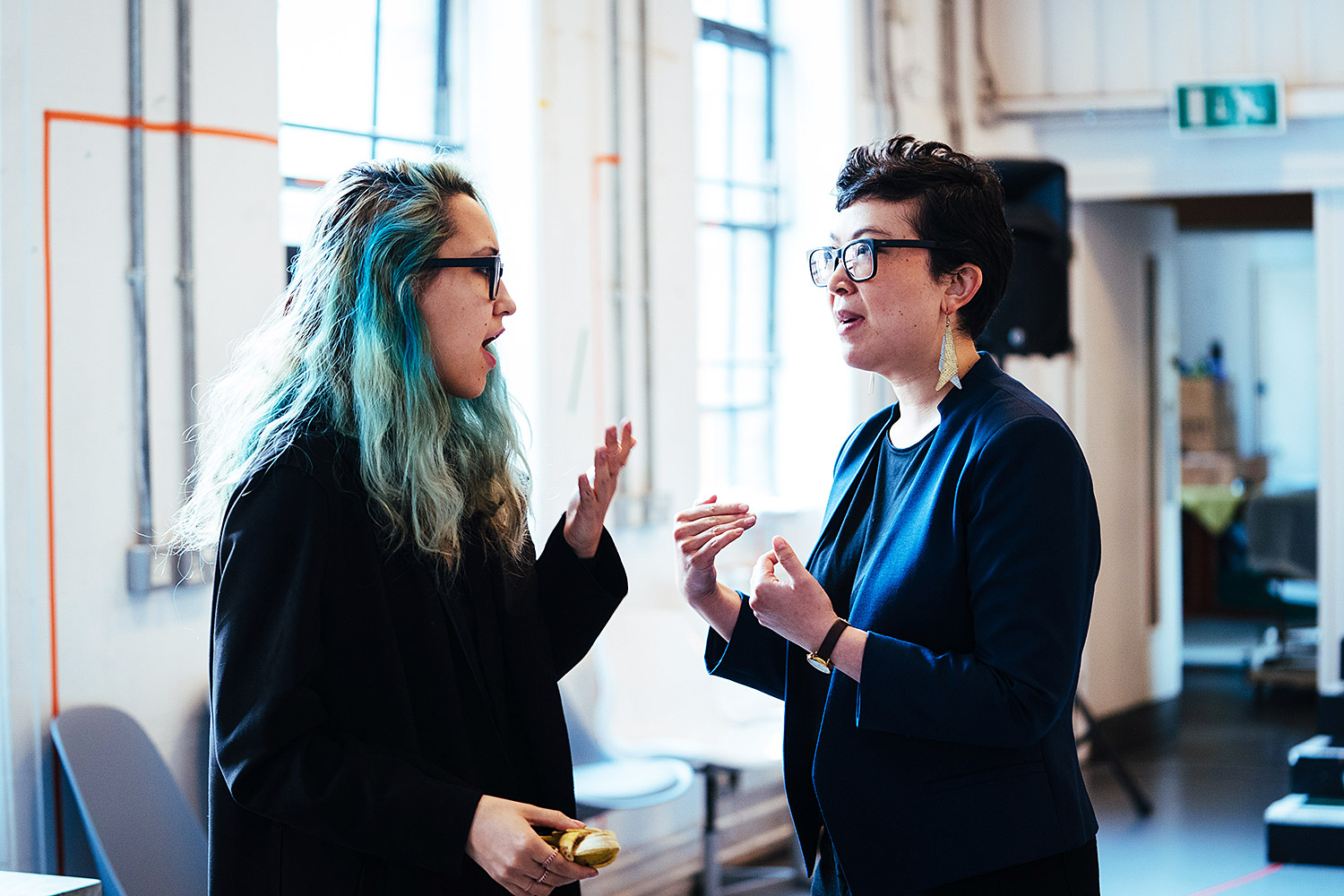 Felicia, in your bio on the Howlround Theatre Commons website, you say that you're interested in writing strong roles for non-native English speakers. Could you talk about why that is?

Felicia: I grew up in a bunch of international communities -- expat villages in the Philippines and Thailand, a very international boarding school in Melbourne, Australia -- so I've always heard English being spoken in very different ways by many people around me. So part of it is just reflecting my own experience of the world and the English language, which is that there's not just one authoritative English but multiple English dialects or Creoles. Also, I think I became very political about writing strong roles for non-native English-speaking actors when I went to college and started working in New York. I was angered by how many talented actors were getting short-changed on good roles just because they had what was considered a 'non-standard' accent, particularly my Asian friends and colleagues.

The script is very specific about the characters' accents, ways of speaking English and language skills. Tell us about the casting for this production.

Nana: We spent three months casting this play. We worked closely with the casting director at the Royal Court who sent us resumes and audition tapes to review while we were in New York, and we also flew to London for in-person auditions. It was a very detailed process. There was a big question about whether we should cast actors who were native English speakers putting on an accent to play their character, or actors who were genuinely non-native English speakers. It was really important to us to not only find the best actor for the role, but also to honour the ethnic and cultural representation of that character.

Felicia: We've also been workshopping this play for almost three years at this point, so Nana and I have a really clear idea of who these characters are and the cultural boundaries for how we want to cast them. For example, with the more 'Westernised' Asian characters in this play, we discovered we could be more flexible around the actors' ethnic backgrounds so long as they had some resonance with the character, because they're much more defined by their Western values than their home cultures. But with the characters that we affectionately call our 'homeland Asians', we felt it was really important that the actors be non-native English speakers from the region they're supposed to be from to give opportunities to these actors who often get passed over for these kinds of roles in Western countries.

Felicia: Over the course of my life, I've watched corporate culture change in a really fascinating way. Silicon Valley and start-up culture have radically altered the way people think about work into what I think is a kind of creepy set of values and practices. As millennial artists, I think it's our job to poke holes in the glossy idealised image that these companies project to the outside world while engaging in shockingly horrific business practices. I mean, we live in the age of Theranos and Fyre Festival! So the play sort of parodies the false utopianism of start-up culture.

How has the script evolved in the past month or so?

Nana: I think we ended up changing only about 20%. Some of this came from things the actors brought to our attention in the rehearsal process, others came from feedback from test audiences, and some from sitting with the audience in previews and listening to their reactions.

Felicia: A huge question we had in the process of workshopping this play is how do you stage complicated issues like racism and beauty standards in Asia [particularly in the context of a comedy] without unwittingly perpetuating the problematic discourses you're exploring. Laughter is amorphous and can be dangerous if it's not carefully controlled by the container that is the play. So a lot of the changes we've made have been the result of dialogue and consideration about where we want that line to fall. And I imagine we'll keep altering the script right up until press night!

Nana, audiences in Thailand have seen you direct a number of physical theatre pieces. What's it like to direct a fast-paced dialogue-driven black comedy?

Nana: It's really fun and challenging. I think directing any story involves being able to identify the changes that are happening and deciding how to take the audience on the journey of those changes. In the physical theatre productions I directed, those changes came primarily from visual and movement-based storytelling, whereas in a dialogue-driven play it's all about the language. It's like the play is an orchestral score and every word is a musical note and each actor is a different musical instrument. I have to make sure the audience can hear the different notes being played and gets hooked on the melody.

Felicia: So much of the play is about the ongoing legacy of colonialism in global culture, and this particularly manifests in the way the characters use English. The ability to speak English 'well' is a huge form of cultural capital in Asia, one that is hugely tied up with class politics and the fetishisation of Western-ness in Asian cultures. So I agree that it'd be very difficult to translate into other languages because actually the ability to speak English is a huge theme in the play. But I think you could definitely perform it in English with subtitles -- given that an Asian audience might have varying levels of familiarity with English, I think it could be really interesting!

What's next for both of you?

Nana: My next big project will be restaging a work I made with B-Floor Theatre in 2011 called Damage Joy for the Bangkok International Performing Arts Meeting in October. Damage Joy is a participatory theatre performance that investigates how we react to other people's pain and the phenomenon of delighting in the pain of others. I'm really excited to be revisiting this work.

Felicia: I have two more productions of White Pearl this year, one in Australia and one in Washington, DC. And my two other plays, Golden Shield and Slaughterhouse, are also both getting productions in Australia. So it's gonna be a non-stop year of rehearsals for me!

White Pearl will be at the Royal Court in London until June 15.

PHNOM PENH: A Cambodian province popular with tourists has banned the trade and slaughtering of dogs for meat, saying that canines are loyal and capable of protecting property and even serving in the military.

Lives at risk as trafficking in faulty masks surges: UN

VIENNA: Lives are at risk as the new coronavirus pandemic has led to a surge in the trafficking of substandard masks, sanitisers and other medical products, the UN warned Wednesday.

Malaysian budget carrier AirAsia's future is in "significant doubt" due to the collapse in demand for air travel caused by coronavirus, its auditor warns.