Asean+3 need to retool to benefit from New Economy

NADI, Fiji: The Asean+3 (China, Japan and South Korea) economies need to build more capacity and connectivity to take full advantage of the Fourth Industrial Revolution and sustain growth in the new economic order, according to the Asean+3 Macroeconomic Research Office (Amro). 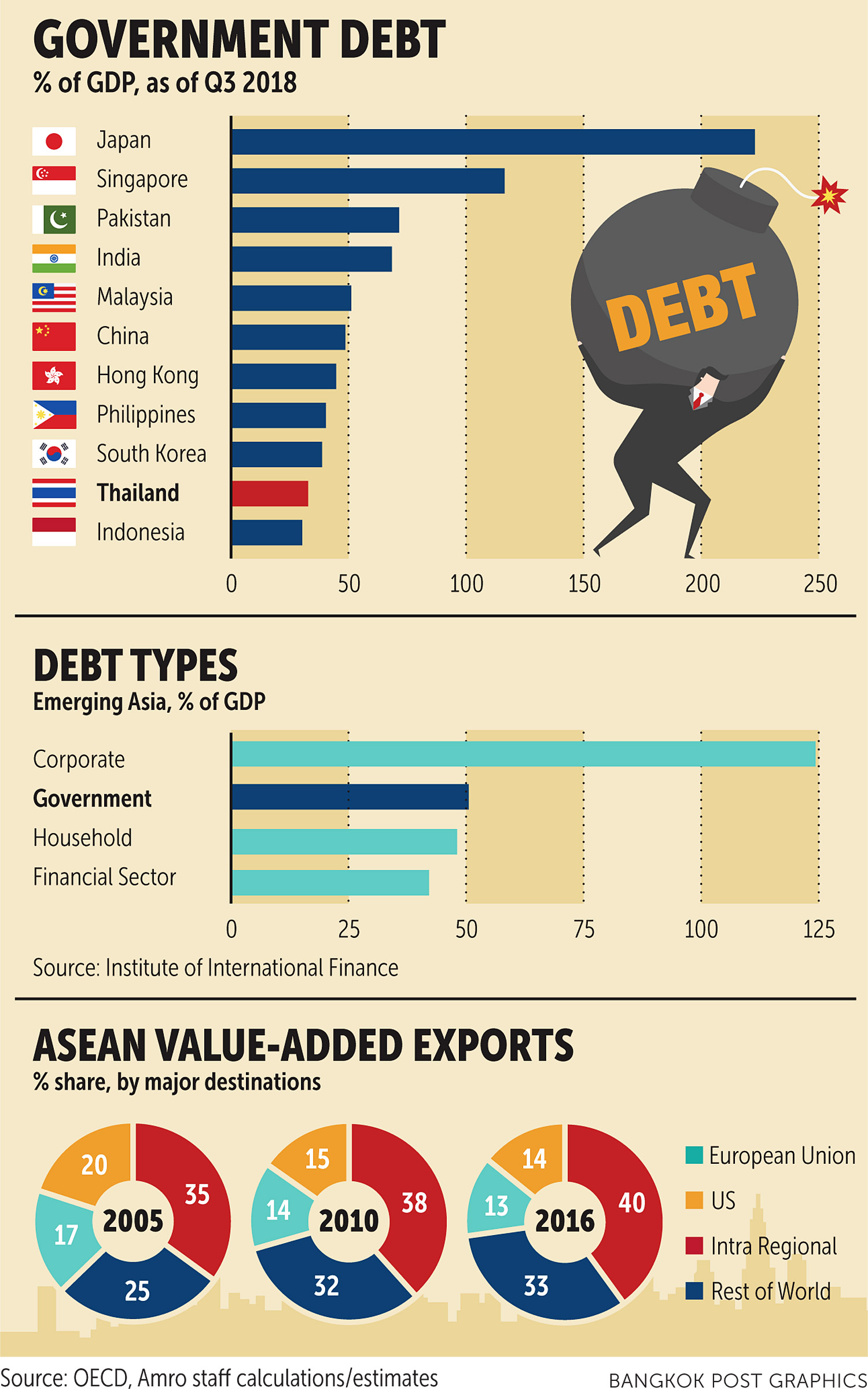 The region still faces medium- and long-term structural challenges, such as the slowdown of productivity and low levels of investment that in some cases have never quite recovered since the crisis of 1997. If not properly addressed, these problems will impinge on growth and prosperity, Amro economists say.

"As many of us are aware, the Asean+3 region's impressive growth catch-up over the past few decades belies a marked slowdown in total factor productivity gains across most countries in the region," Amro director Junhong Chang, said at a seminar held on the sidelines of the Asian Development Bank (ADB) annual meeting in Fiji last month.

While total-factor productivity accounted for 1.5% of the region's average annual growth of 7% between 2002 and 2007, Dr Chang said its contribution fell "sharply" from 2011-17.

"This trend has to be addressed urgently, at a time when the Fourth Industrial Revolution and the New Economy are transforming the workplace and changing the technological and skill intensity of products," she stressed.

The slowdown in productivity is a warning that manufacturing for export, which has driven prosperity for decades, is no longer an adequate or sustainable growth strategy. A transformation to services is "inevitable", but progress in moving up the technological ladder will be uneven, said Hoe Ee Khor, chief economist of Amro.

"The region has done very well over the last 20 years and we want to continue to do the same for the future," he noted.

"That is the vision we have for the region which is about continuous rapid expansion, but the question is, what kind of capacity and connectivity do we need in order to achieve this growth?" said Dr Khor.

The economy in the future will look very different as manufacturing and services are transformed by new technologies, said Dr Khor. The manufacturing sector will continue to shrink while services become "the main driver" of the economy.

Dr Khor identified three main growth drivers for the new economy. The first is new technology such as artificial intelligence, automation, 5G and the Internet of Things (IoT). The second is demographics, where more mature populations and an expanding middle class fuel rapid urbanisation and demand for more sophisticated goods and services.

Lastly, the anti-globalisation backlash that we are seeing in the West will affect global growth in the short run, according to Amro simulations. In the long run, however, demographics will dictate the prosperity of Asia.

"Regional integration will continue regardless of increased protectionism due to the rise in the middle class," he said.

The move toward the New Economy began a decade ago, Dr Khor explained. Proof can be found in the share of GDP driven by external demand, which shrank from 44% in 2005 to 30% in 2016 in the Asean-4 (Indonesia, Malaysia, the Philippines, Thailand) plus Vietnam.

"This is pretty much because after the global crisis (in 1997), external demand collapsed so the region had to rebalance its growth by shifting more toward domestic demand," he said.

"But not only was the region depending less on external demand, it was also depending more on intraregional demand which is much more self-sufficient, and this trend will continue regardless of the rise in protectionism."

Building the infrastructure to support the prosperous vision Amro has for Asean will mean overcoming three challenges: the funding gap, the foreign-exchange gap and the factor gap.

The funding gap is the traditional savings-to-investment gap. But the forex gap is a bigger challenge in Dr Khor's view, affecting emerging economies more as they need to borrow from the capital market. These economies, which are more affected by the volatility of capital flows, should save and build up sufficiently large foreign reserves as a buffer against capital outflow risks, he recommends.

The Philippines and Indonesia in particular are running bigger deficits to support their infrastructure building programmes, he said. "The market is watching it very closely and if the deficit widens too much, they will get gobbled up by the market and that is a very strong constraint on the ability of these economies to expand investment, particularly in infrastructure."

In the third quarter of last year, government debt in emerging Asian economies reached 50% of GDP, which suggests that the region is shifting away from fiscal conservatism, according to the Institute of International Finance. However, increases in public debt also point to potential problems if the global economy suddenly collapses.

"Entering a financial crisis with a weak fiscal position worsens the depth and duration of the ensuing recession, particularly in emerging-market economies, because fiscal policy tends to be pro-cyclical in these cases," Vitor Gaspar, director of the Fiscal Affairs Department at the International Monetary Fund, told Nikkei Asian Review in January.

The "collapse of investment" since the Asian crisis in 1997 "has never recovered" and this lack of investment has been pulling GDP growth down by at least one or two percentage points.

The foreign-reserves coverage of the Asean-4 and South Korea is "quite high" at 8-10 months' worth of imports, compared with 4-6 months in 1995. But the question is "how high is enough?" said Dr Khor.

"Do we continue to accumulating reserves in order to weather these shocks?"

Apart from the financial constraints on growth (funding and forex gaps), there is also a "factor gap", which is the hard and soft infrastructure needed to grow more rapidly.

"For instance, skills. Everywhere you go in the region, there is a shortage of skills, so the region very much needs to ramp up training programmes for workers and revamp its regulatory framework to accommodate new technology," he said.

Since new technology, by nature, is built for an economy of skills that works better in a cross-border context, many of the traditional frameworks need to be reformed to better suit the times.

Dr Khor said the Asean+3 nations should make better use of their deep savings pools and encourage more intraregional investment. Their combined $6 trillion in reserves is "more than enough" to cushion against global volatility shocks. Pooling reserves could also be considered to strengthen defences.

Meanwhile, continuous development of both hard and soft infrastructure is a must to strengthen human capital and connectivity with neighbours, expediting Asean's own master plan for connectivity and in partnership with China's Belt and Road Initiative.

"I think the region as a whole should make concerting efforts to leverage these international initiatives and take advantage of it to build up the necessary connectivity," he added.