Tourists flock to Wat Phra Kaew (Temple of the Emerald Buddha) in Bangkok, which is known as one of Thailand's premier landmarks. Built 237 years ago, Wat Phra Kaew attracts thousands of visitors each day.

Bangkok has added its 2019 award as the world's top destination to a list of prizes it has won over the past decade, but the latest success comes with one question.

Will it retain the crown in years to come?

While Bangkok has traditionally been famous for its exotic street food and low cost of living, the City of Angels has now also become infamous for a range of problems from overcrowding at airports to car emissions, noise pollution and tricks by some locals to take advantage of tourists.

These unpleasant impressions did not bar Bangkok from being ranked first in the annual Mastercard Global Destination Cities Index. It is also the fourth straight year that the Thai capital enjoys a reputation gauged by such factors as the number of international overnight visitor arrivals and cross-border spending.

But with complaints from tourists and growing concerns over the poor environment in Bangkok, officials and business people insist they cannot be complacent with the city's current world-renowned status.

Despite the city gaining accolades as a top leading tourist destination, Vichit Prakobgosol, president of the Association of Thai Travel Agents (Atta) said Bangkok must work hard to maintain its lead.

He said the city's airports are overcrowded and need to be upgraded to help tourists visit the city or make it on time for connecting flights.

He warned that only half the tourists who visit the city per year are "repeaters", a term to describe revisiting tourists.

To make sure they keep coming back, the government and the tourism sector must create fresh tourist attractions such as a city tower or new landmark, he said.

In addition, the government must maintain or even redevelop current attractions such as the Chao Phraya riverside. He said the city could also highlight its current heritage buildings as new tourist destinations.

Tourism Authority of Thailand (TAT) governor Yuthasak Supasorn said Bangkok's pollution is also endangering tourism. He said the government and the city administration needs to solve the problem and interested parties must grow trees for tourists so they can enjoy nature, instead of just shopping or taking cultural trips.

Earlier this year, Bangkok was plunged into a fear of a drop in tourist numbers when it encountered the seasonal ultra-fine dust, known as particulate matter PM2.5.

Though the dangerous haze was gone by March, the city has still been plagued by smog.

Bangkok governor Aswin Kwanmuang told the Bangkok Post that air pollution and traffic woes will gradually ease over the next few years after the construction of city train lines is completed and more electric trains enter service.

The BMA and the government are working to reduce fares on electric trains to help commuters and tourists alike.

The BMA is also ramping up projects to make Bangkok a sustainable city in line with the TAT's campaign.

Among them is planting 100,000 large trees across the city in a bid to improve green space. Bangkok has only 6.8 square metres of green space per person, which is below the standard of 9 sqm recommended by the World Health Organisation. So far, 32% of trees have been planted.

The BMA is also promoting "unseen" new tourist destinations, for example the old town sections such as Nang Loeng Market, Talat Noi area by the Chao Phraya River, and new routes in canal communities such as Khlong Bang Luang in Bangkok Noi area.

Pol Gen Aswin said the BMA is going to improve safety for residents and tourists by linking data recorded from 57,000 CCTV cameras to a main control room.

He admitted that only 10,000 of the cameras are so far linked with the BMA. The other 47,000 are standalone units.

While the TAT and BMA looked to solve air pollution and create new landmarks, what draws visitors from around the world are old tourist stomping grounds, such as Khao San Road, the notorious first stop for young backpackers making their trips through Southeast Asia.

Cristina Perez, 25, and her boyfriend Marc Gonzalez, 27, both from Barcelona, are on their first trip to Thailand. When the Bangkok Post spoke with them, it was also their first full day in Bangkok. They decided to stay on Khao San Road, but were surprised by the party atmosphere.

"We did not expect everything to be like Ibiza," said Ms Perez, as a police car drove up the road flashing its lights. 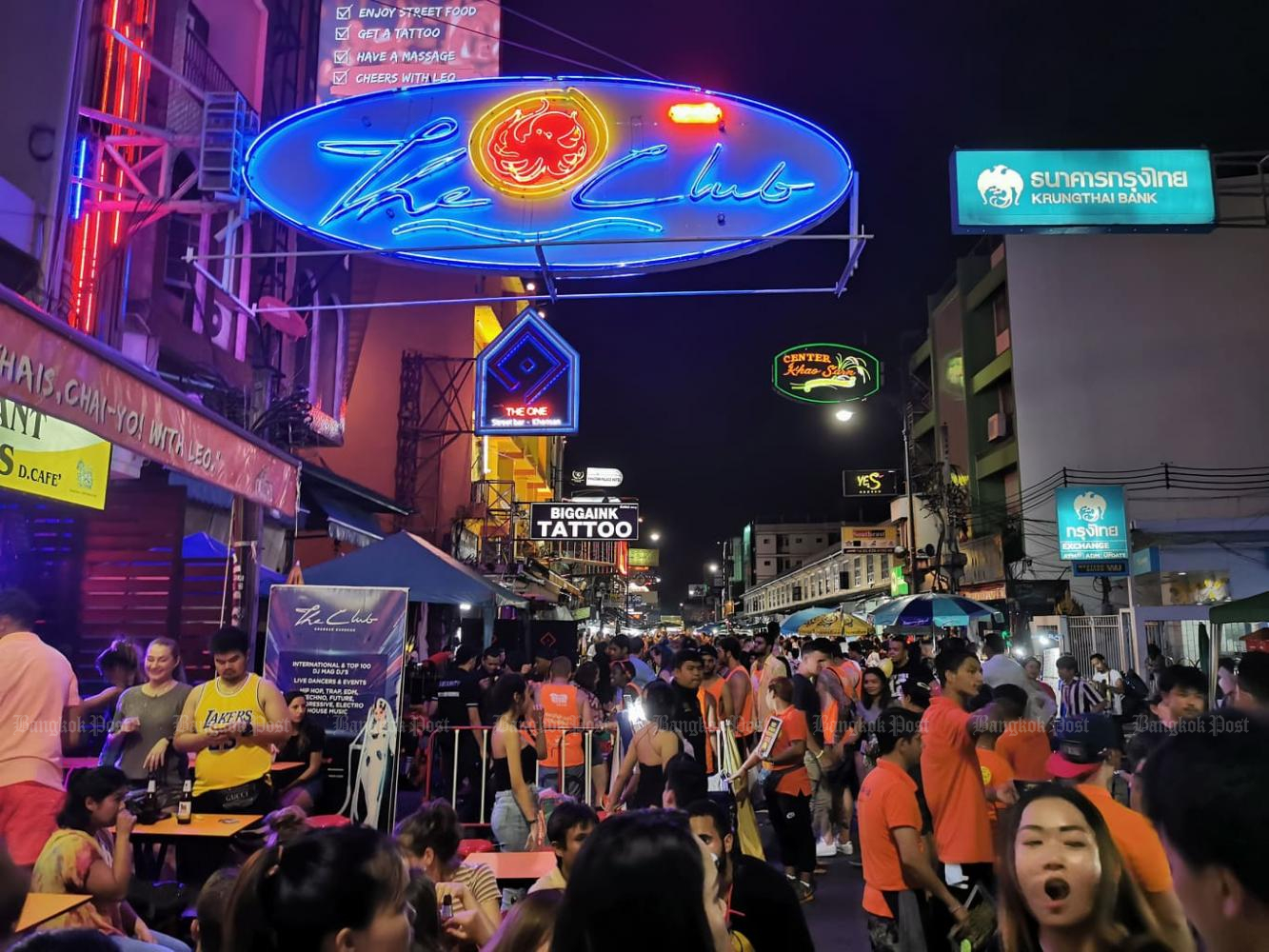 Nights on Khao San Road are anything short of calm. Even on a rainy weekday night, the clubs and restaurants in the area are relatively full. Loud music blaring out of the local establishments drowns out any possibility of a conversation, while street vendors thrust fried scorpions on sticks and bracelets with lewd phrases in tourists' faces.

Brazen salesmen offer passersby illegal laughing gas balloons for 80 baht a piece, and despite a police presence on the road, physical altercations between patrons are par for the course.

In just three hours on Khao San Road, two fistfights occurred as witnessed by a writer from the Post. In the first instance, a Thai bartender repeatedly asked a belligerently drunk foreign man to leave the bar. When he refused to leave, the bartender, who was serving out of a converted Volkswagen bus, gave him a swift punch to the face and forced him out into the street.

In the second instance, a group of drunk foreigners at another bar started fighting among themselves over a seemingly minor comment. In the end, the foreigners made up and apologised to one another with no outside intervention.

"We were not ready for this. We thought that Thailand would offer a bit more culture like in other cities," said Ms Perez.

One of their favourite parts of Bangkok so far, they said, were the monuments. The pair also said that on their first day of exploring, they encountered a dishonest taxi driver who said he could take them to the floating market for 600 baht.

"He said he was taking us to the floating market, then we saw on the Google maps that he was going the wrong way. So we said drop us off. We paid him some money and left," said Ms Perez.

The pair was also unhappy with inflated prices for foreigners. "We also do not like that if you're not Thai you have to pay more for everything."

Lukas Pichlmair, 22, from Vienna, is on his fifth trip to Thailand. He says he keeps returning to Bangkok to visit his Thai friends who work for the Austrian embassy. "I love the street food, but I don't like these aggressive street vendors who put signs in your face," he said.

Laura Fernandez, 20, and Carlos Martinez, 25 are another couple from Barcelona on their first trip to Thailand. "It's just chaos," said Laura, who had only just arrived in Bangkok a few hours before.

"We came here to see something different."