NO AIRPORT WANTED: Signs at a house at Nakhon Pathom oppose the Department of Airports' plan to build a 20-billion-baht airport to ease congestion at Suvarnabhumi and Don Mueang airports which are already running over capacity.

Along with significant growth in the tourism industry over the past five years has been growth in air traffic which has exceeded the capacity of current infrastructure.

Overcrowded terminals and long queues are a common sight at both airports while airport slots are fully booked by airlines without room for more flights, not to mention growing demand for chartered planes and private jets.

Overcapacity has created challenging operating environments and threatens to compromise the ability of the tourism and aviation industries to fully deliver benefits to the country.

To relieve congestion at the capital's two main gateways, the Transport Ministry's Airports Department has proposed building a new airport in Nakhon Pathom, an adjacent province to Bangkok in the west, with an estimated investment of 20 billion baht.

But the project has drawn a mixed reaction. Some locals who will lose their land fear their livelihoods will be destroyed.

According to the department's deputy director-general Jaroon Meesomboon, the new infrastructure is being planned on a 3,500-rai block of land straddling Bang Len and Nakhon Chaisi districts under a public-private partnership investment programme to keep public debt burden low.

Various groups have shown a keen interest in the new project, drawn by a high economic internal rate of return of more than 20%.

Under the plan, the government will absorb land appropriation costs while its private partners will build and operate the facility.

Construction is expected to take four years and the number of passengers in the first year of service is estimated at over one million, potentially on par with key regional airports like Surat Thani and Khon Kaen.

The study into the Nakhon Pathom airport construction plan is being analysed and the findings will be forwarded to the National Economic and Social Development Council before the proposal goes to the cabinet.

If approved by the cabinet, construction is likely to start in 2023 and commercial operations are expected in 2025-2026. The airport is designed to handle up to 25 million passengers per year when all the proposed phases of the airport are complete.

During the first phase, the Nakhon Pathom airport will cater to chartered services, helicopters and aircraft with civil missions like aerial surveys.

Eventually, the airport will accommodate 80-100 seat aircraft operating services between Bangkok and second-tier provinces to ease congestion at Suvarnabhumi and Don Mueang airports.

Nakhon Pathom is a strong contender for the new airport project thanks to its location and the comprehensive road network being developed to the west of Bangkok, says the Department of Airports.

The province is about 50 kilometres away from the inner areas of Bangkok.

It has a comprehensive road network including the Bang Yai-Kanchanaburi motorway, the outer ring road, and the Chon Buri-Saraburi-Nakhon Pathom motorway.

The Nakhon Pathom facility will be the fourth airport to serve the area around Bangkok.

While Bangkok is served by Suvarnabhumi and Don Mueang airports, and U-Tapao airport in Rayong province is undergoing a major upgrade, a high-speed rail system is being developed to link the three airports.

In addition to domestic flights, the new airport can support Asean services, according to the department.

The Department of Airports says a study shows the project site has low population density -- 200 households on 400 plots.

While acquiring the land does not seem like much of a challenge, residents are worried about losing homes, farmland and livelihoods and have started complaining about land grabs by speculators.

Sukho Phetkasem, a village head in Bang Len district, has expressed concerns about impacts of the environment and livelihoods as the project location covers residential and farm land.

"The project is being pushed without properly informing people about how they will be affected or what measures are being planned to alleviate the impacts," he said. 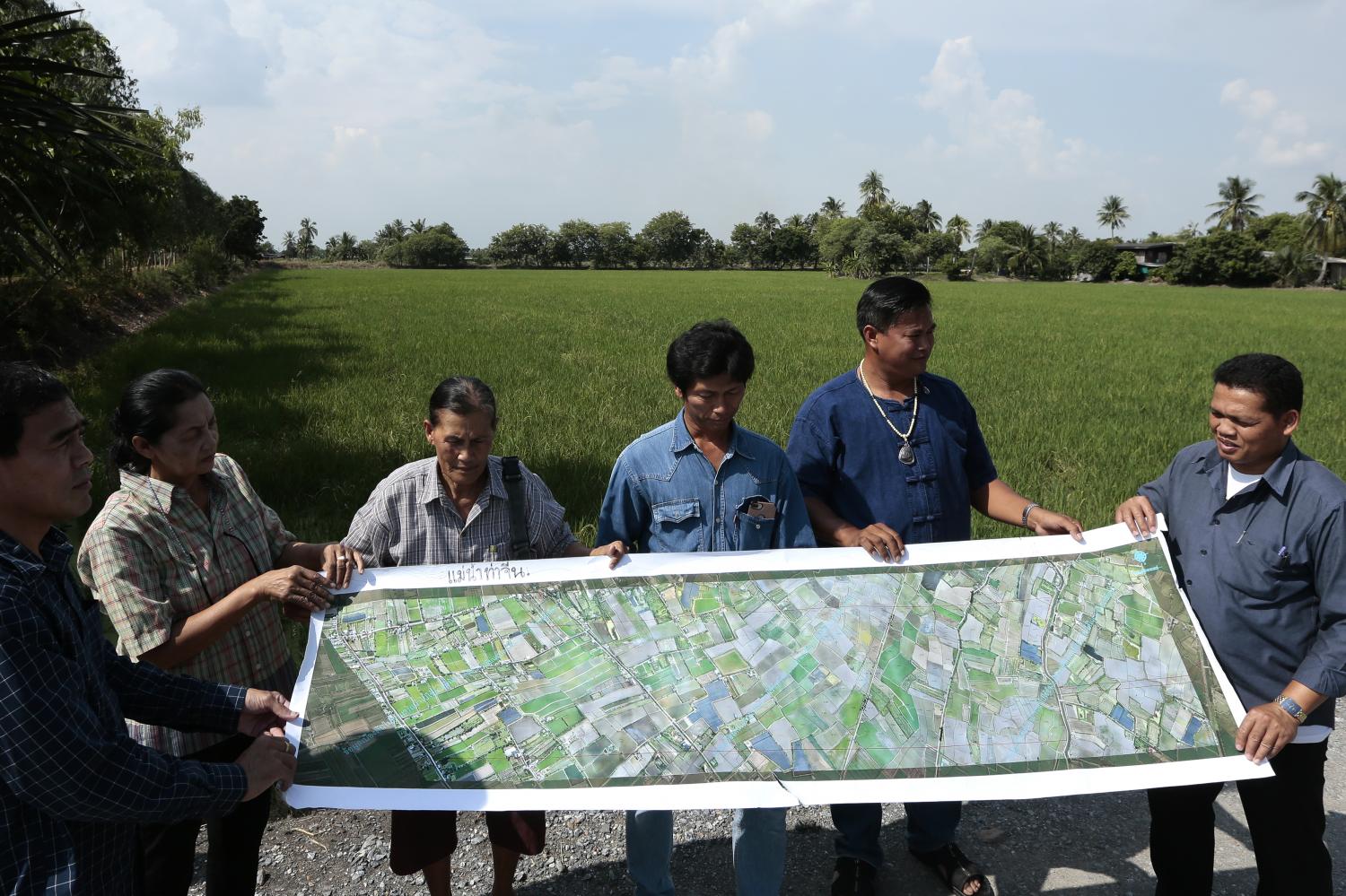 WHAT WE'LL LOSE: Villagers in tambon Bang Rakam in Nakhon Pathom's Bang Len district show a map featuring the areas being eyed for the airport project. About 400-500 plots of land are likely to be appropriated to make way for the scheme.

Public hearings are currently under way to gather opinions about the project.

"We don't want to leave our land. Relocation is a big deal because it affects our jobs and our livelihood. The locals are on edge. What will they do after being relocated? There is no plan for them at all. They are here to talk about their project only, not a word about how locals will be affected," he said.

He added that land prices are soaring with some owners being offered 2-5 million baht per rai.

Hansa Prakobboon, a villager, said the local eco-tourism industry in Nakhon Chaisi district stands to be seriously affected by the new airport, during and after the construction.

Mr Hansa said he has heard that many people forced off their land to make way for the Bang Yai-Kanchanaburi motorway have yet to receive compensation despite a lapse of three years.

Natthawat Chan-in-ngam, leader of Tha Chin River conservation group, said residents will team up with environmental and health experts and economists in their scrutiny of the airport project.

He said the group's priorities are the environment and health impacts and they will focus on the project health and environment assessment study which has yet to be released.

"We'll also make an economic assessment of our communities. If they're worth over 1 billion baht, building an airport which turns in profits of 300-400 million baht a year doesn't make economic sense," he said.

Mr Natthawat said the group will also seek support from the Ministry of Natural Resources and Environment in their fight to have the project dropped.

However, the group is also preparing for the worst.

If they lose and the project goes ahead, they will make sure those affected by the development will receive proper compensation which must include costs of lost opportunities.

"Those who are displaced should receive financial aid for lost opportunities for the first five years, in addition to rehabilitation funds. We'll also ask the government to provide land for the villagers as well," he said.

Deputy Transport Minister Thaworn Senneam said he has asked the department to review the project following concerns from residents, but insisted he has not obstructed it.

"Many occupants are tenants, not owners, so they will not be paid compensation for land appropriation. So I've requested a review," he said.

According to an opinion survey by the National Institute for Development Administration, or Nida Poll, a majority of people agreed with a plan to build the new airport in Nakhon Pathom.

The poll was conducted on Sept 12-13 among 1,273 people aged 15 and over of various levels of education and occupations nationwide.

About 65% agreed with the plan because it would facilitate air travel for people in the province and nearby areas and promote local tourism and decentralise growth outside Bangkok.

But 18% disagreed, saying Don Mueang and Suvarnabhumi airports could handle more passengers and improvements should be made to the two main airports instead.

The remaining respondents were either not interested or uncertain or had no comments.

Asked who they think would benefit from the airport, 37% pointed to investors and businessmen related to commercial aviation; 37% the people of Nakhon Pathom; 36% the people to the west of Bangkok; 30% Thailand as a whole; 26% tourism in western Thailand; 2% said nobody would benefit from it; 1% cited the government and state agencies; and 6% were uncertain or had no comment.

Too early to decide

The expansion projects for Suvarnabhumi and Don Mueang airports may be used by critics of the fourth airport to question if it is necessary.

Don Mueang is moving towards the third phase of its expansion project, which is valued at 39 billion baht.

The scheme has entered the design stage with the environmental impact assessment being reviewed and a budget proposal being drafted.

If the third phase of the expansion gets the green light from the authorities, construction will begin some time between 2020 and 2025 and, when complete, is expected to increase Don Mueang Airport's passenger handling capacity to 40 million passengers a year -- up from 30 million at present.

Suvarnabhumi Airport, which opened in 2006 is undergoing an expansion which is designed to accommodate 80-100 million passengers per year, observers say.

It now handles 70 million passengers a year, way above its capacity of 45 million.

If a 42-billion baht second terminal is approved, it will be ready to serve the public between 2022 and 2023.

"There are more rounds to go before it is determined if the new airport development plan will proceed or go on the shelf," a source said.

The Public Health Ministry has reiterated its call for almost 2 million elderly to get jabs against Covid-19, saying half of the deaths recorded last week were among people not vaccinated.