Will GPS monitoring end the carnage on our roads?
Thailand
Special Report

Will GPS monitoring end the carnage on our roads?

A driver of a public vehicle is required to swipe a card through a GPS-linked reader, to self-verify his identify before driving.

First-time minister Saksayam Chidchob is quickly making a name for himself as a rookie politician with a never-ending store of new ideas.

Not a month has passed without the transport minister, a Bhumjaithai Party list-MP, producing a new brainchild. His ideas range from legalising taxi-hailing apps and increasing the speed limit on highways, to placing regular checkpoints along inter-provincial routes to monitor public vans.

The bold proposals have made Mr Saksayam -- the younger brother of veteran politician Newin Chidchob -- a household name. Yet some ideas have also drawn fierce opposition.

His push to legalise the Grab ride-hailing app has made him public enemy No.1 among meter-taxi drivers. Meanwhile, safety experts worry his idea to reduce car accidents by raising the highway speed limit from 80kph to 120kph may have the opposite effect.

But his latest brainchild has triggered perhaps the greatest resistance.

Last Monday, Mr Saksayam announced he is considering whether to require all privately owned vehicles, including motorcycles, to install GPS devices that can be tracked by authorities.

The GPS technology will allow a government transport agency to monitor motorists who breach the speed limit, behaviour which is blamed for the majority of road accident deaths.

Motorists and critics have complained of the financial burden of the scheme and questioned its benefits. Many have also raised concerns about privacy.

According to a Transport Ministry source, the premier agreed with the GPS policy. "After weighing the pros and cons, the prime minister is on the transport minister's side. He is worried about road accidents."

Thailand has the highest road fatality rate in Asean and the ninth-highest in the world, losing 32.7 people per 100,000, according to the World Health Organisation.

As of now, the GPS policy is just an idea. The transport minister has given the Department of Land Transport (DLT) one year to explore the possibility of installing the trackers in private cars and motorbikes. Currently, there are about 40 million cars and motorbikes registered with the DLT.

"It is too soon to say whether the proposal will be put into practice. And if it is adopted, we still don't know exactly how it will be implemented. The cabinet will have the final say on implementation," he said.

Mr Saksayam admitted motorists will have to shoulder a financial burden, but said GPS will gradually become more affordable.

The transport ministry estimates that each GPS device will cost about 10,000 baht, with motorists also required to pay annual maintenance costs of between 3,000 and 6,000 baht.

The ministry is studying how it can help motorists with the costs. "We still have many factors to think about, including ways to install the devices and how we can help people," he said.

According to Mr Saksayam's plan, GPS technology can be used in several ways.

One option is to use it to detect motorists who breach the speed limit for two minutes or longer. The installed GPS device will then send data to the government-run server, which will issue a traffic ticket to the wrongdoer's address. Mr Saksayam apparently got the idea from other countries where it has been adopted.

However, the DLT is also exploring other methods to keep drivers in line with traffic law.

The department's GPS-embedded vehicle management centre said there are at least two systems that can help alleviate fears of privacy violations.

Critics say the GPS policy will allow the government to locate and identify drivers wherever they go. This would represent an unprecedented level of state surveillance in Thailand.

However, centre director Titipat Thaijongrak argues this does not reflect the government's actual plans for privately owned vehicles.

"We're not going to use anything like the GPS tracking system currently installed in trucks and public vehicles," he said, adding officials only want to limit driving speeds, not locate the drivers.

The technology connects with a computer network to monitor speed limits in different areas in order to control driving speeds.

Take community roads and highways as an example. Here speed limits are set at 50kph and 80kph respectively. If a car or a motorcycle exceeds the maximum speed restriction, ISA will alert the driver to slow down.

ISA is already being used in Europe, but only new cars can be equipped with the device, he said. 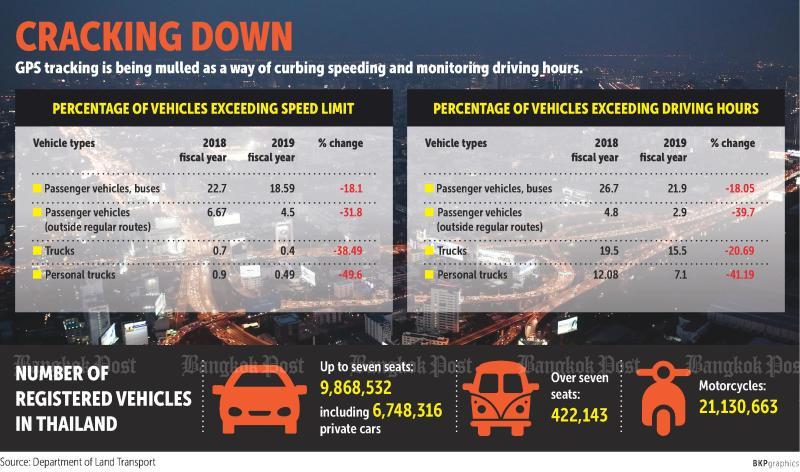 The other option is "Radio Frequency Identification" (RFID). It works like an Easy Pass card reader, identifying vehicles which carry the card and allowing them automatic entry to expressways.

RFID installed along roads can also read data sent from a device installed in a car or motorcycle to tell whether the driver is speeding.

Many countries have already tested GPS technology and found it can play a significant role in ensuring safer driving.

The Australian government found that up to 89% of drivers slowed down after being alerted by ISA devices used in its pilot project, in Illawarra, New South Wales.

A similar outcome was achieved in research by the Norwegian Public Roads Administration.

The use of ISA in 2.6 million vehicles has reduced the death toll and severe injuries caused by road accidents, it said.

The device also helped cut fuel use by 4%.

However, despite the satisfactory outcomes, it remains uncertain whether authorities' commitment to the new technology will remain firm in the face of opposition and whether drivers will finally welcome it.

Is tech the solution?

Transport Ministry adviser Agachai Sumalee, who is also a professor of transport systems at the Hong Kong Polytechnic University, has thrown his support behind the proposal, citing European Union studies and standards for the GPS system over the past 20 years.

For Mr Agachai, these are proof that GPS offers a new reliable solution to the chronic problem of unsafe driving in the country.

However, his opponents say the use of technology will not solve the problem at its root.

Instead, the GPS idea is merely another sign that traffic police and laws are failing to keep motorists in check, they say.

"I don't believe the GPS technology can change behaviour and force Thai drivers to be more disciplined," said Chaiwat Ketsom, who has driven a car and ridden a motorcycle for the past five years.

"Currently there are speed cameras installed all across Bangkok, but many drivers still don't respect laws. They even ignore traffic tickets."

Malaysia plans to debate and annul its emergency laws in parliament next month, ending a days-long standoff between the government and the nation’s king over the matter.

Factory outbreaks may cut Aug-Dec exports by B300 bn - shippers

Key exports could decrease by as much as 300 billion baht in the remaining months of the year if the spread of Covid-19 infections continues at factories, the country’s exporters' group said on Tuesday.

A missing Belarusian activist has been found hanged in a park in the Ukrainian capital Kiev, police said on Tuesday, adding they had opened a murder probe.

Most think free speech is restricted during pandemic: poll