The many yang naa trees lining a well-known cross-border road linking Chiang Mai and Lamphun provinces have stood the test of time for well over a century, helped by locals who are working tirelessly to prevent them falling victim to the axe. 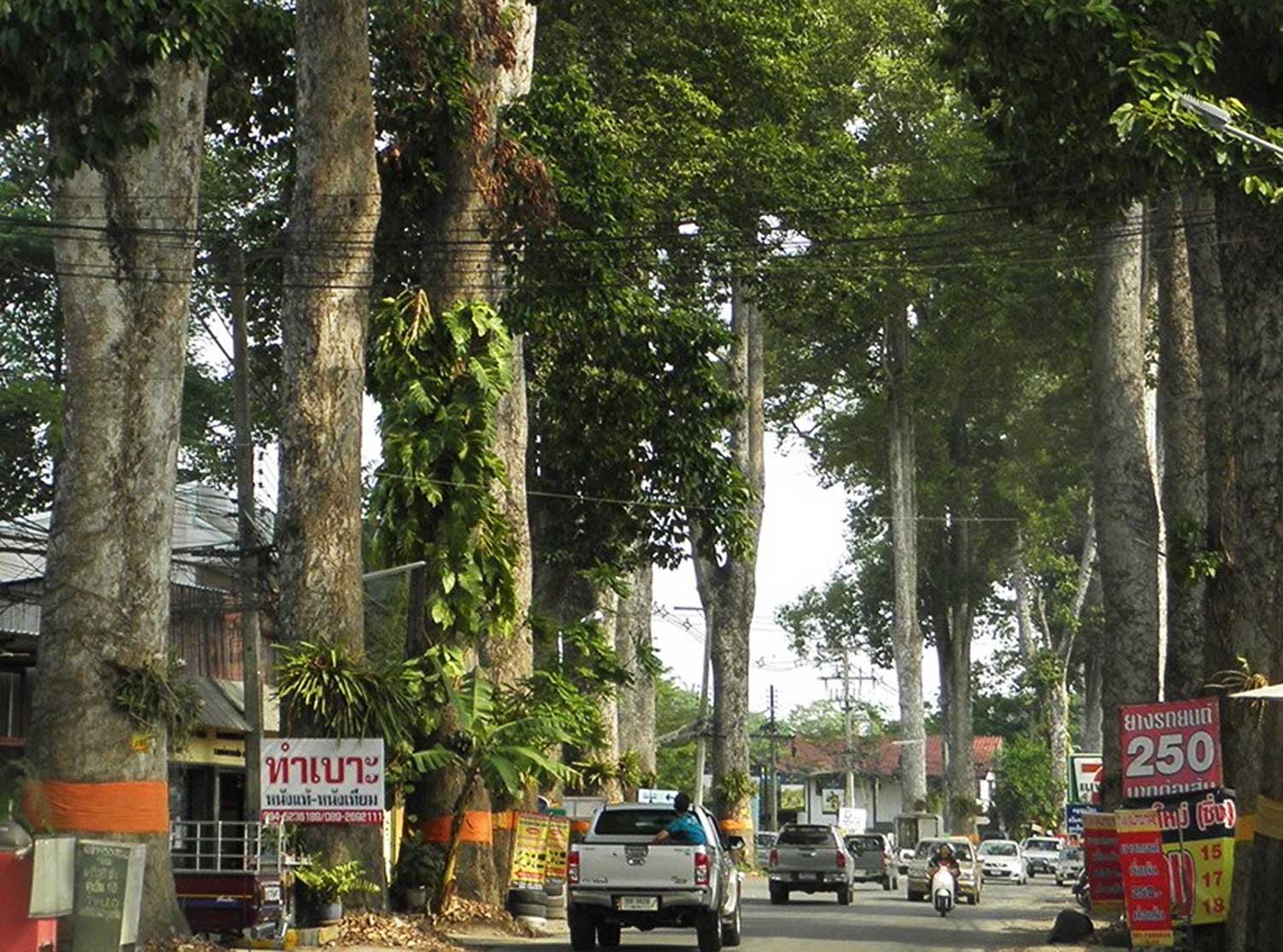 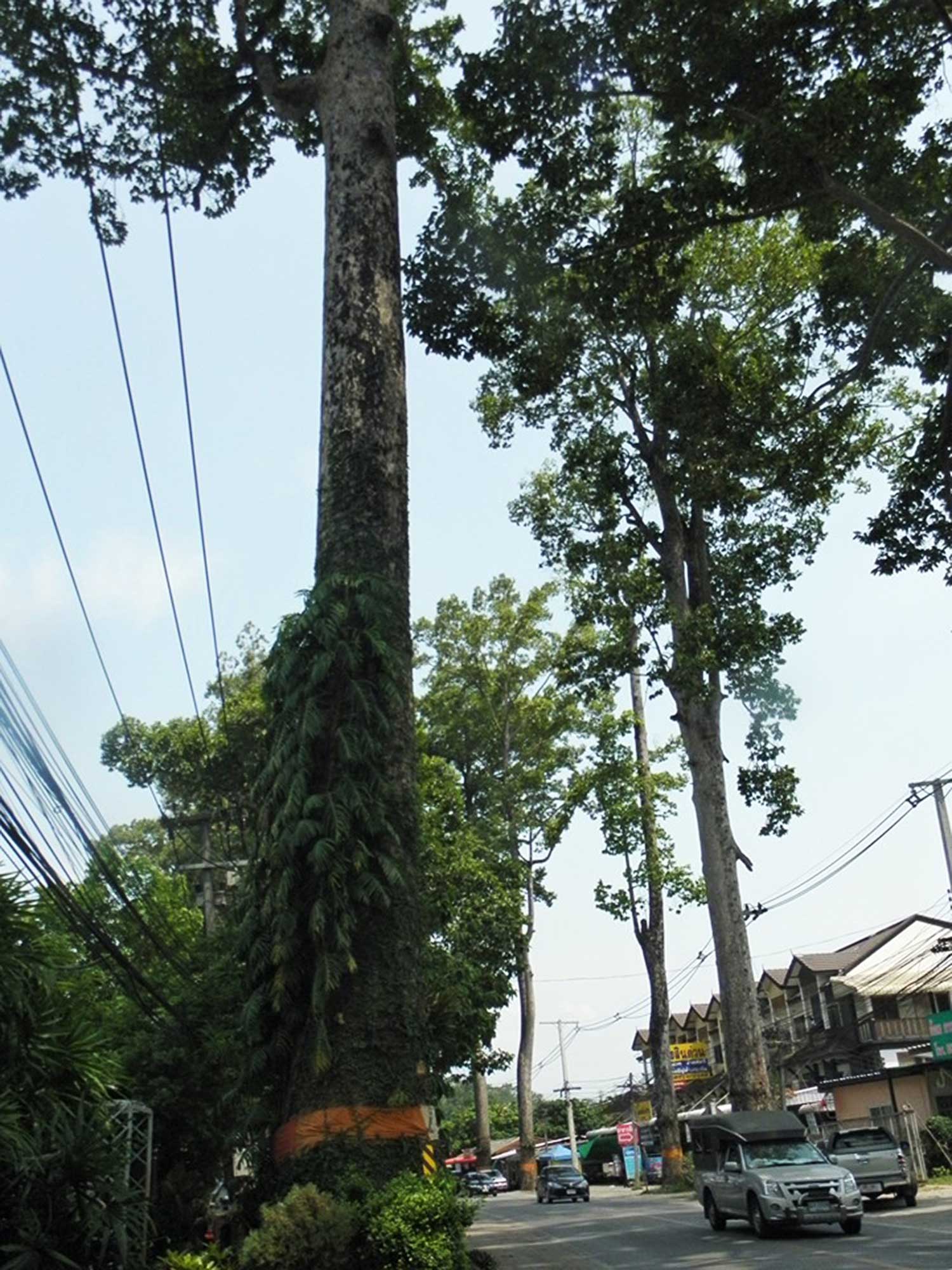 The towering yang naa bring shade and character to the Chiang Mai-Lamphun route. The trees, most of which are more than a century old, are being conserved by local communities. (Photos by Phanumet Tanraksa)

The almost 1,000 yang naa (Gurjan) trees are nearly as old as the road they line in the two northern provinces and were recently threatened with the chop due to disease and neglect.

The most serious threats came from a road-widening plan and a bid to improve public safety.

However, saviours came in the form of nearby communities that have learned to recognise the yang naa for their natural beauty and as living symbols of their cultural identity.

The trees had, at one point, divided local communities. Some people wanted them cut down after large branches fell on nearby houses causing some fatalities, according to residents.

Others, however, stood firm on preserving the trees, which are more than 130 years old and regarded as valuable pieces of history.

Experts also insisted that the trees and people could easily co-exist, provided the trees were provided with proper care. 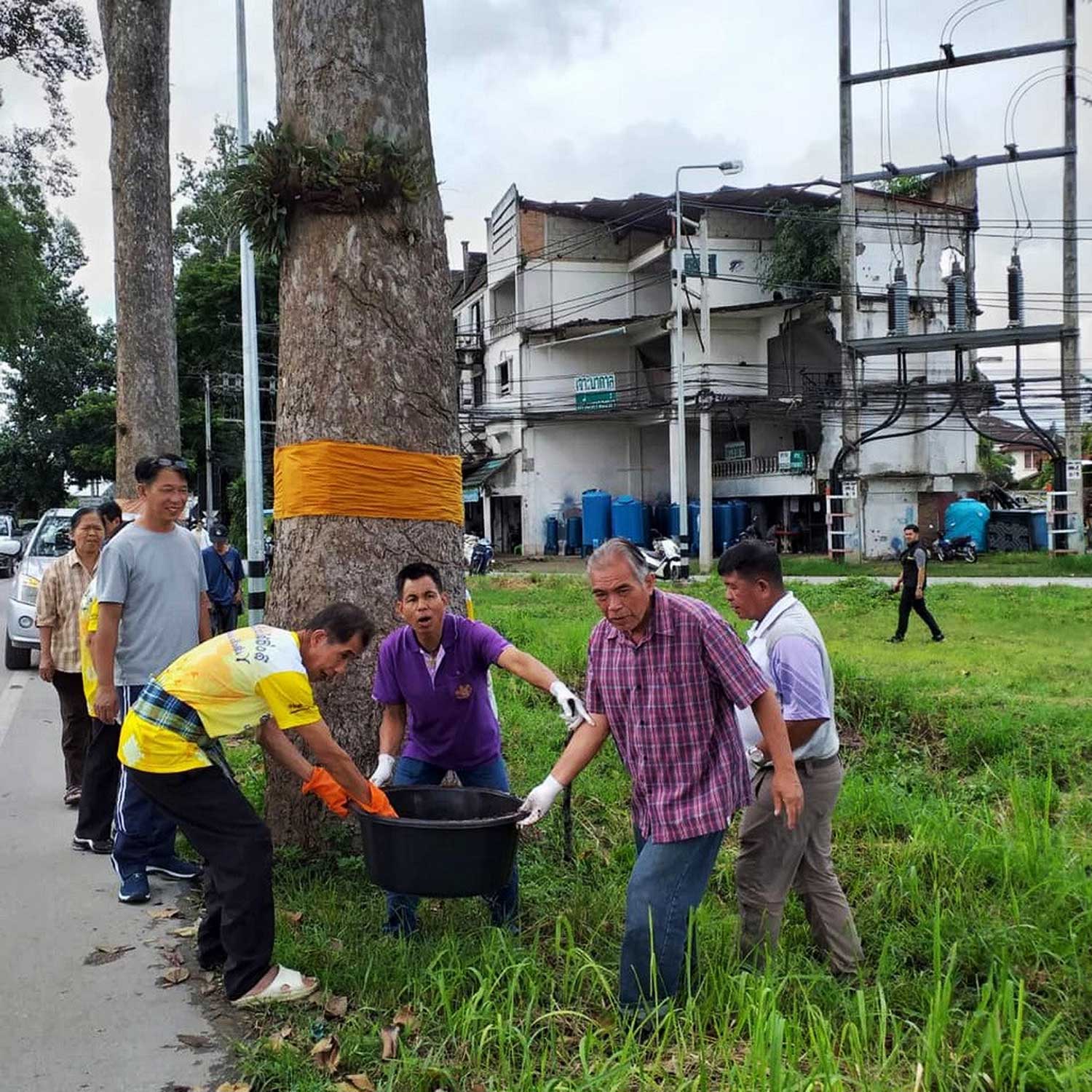 Locals clean the area around yang naas, which have been ‘ordained’ with monk’s saffron robes to protect them from being cut down.

The conservationists and experts won the day convincing the critics not to break out their axes and chainsaws. The next step was to apply the correct methods to conserve the trees, which involved effort from the communities, experts and local administrative organisations.

"These efforts have literally meant starting from the ground up," said Banjong Somboonchai, lecturer at the Faculty of Architecture and Environmental Design at Maejo University in Chiang Mai.

"Healthy trees grow from the soil which must also have the properties to sustain life," he added.

One of the most pressing problems affecting the yang naa was to do with the poor condition of their root system, he explained. The trees were not getting the nutrients they needed so fertiliser was required.

However, concrete for footpaths had been poured too close to tree trunks and had to be removed for the fertiliser to work, he added.

Nicknamed the "tree doctor", Mr Banjong is still conducting root rehabilitation work on 80 of the trees. He and his team are being helped by a local conservation group called the "Kiew, Suay, Horm" (Green, Beautiful and Fragrant) Network in cooperation with tambon administrative organisations.

These 80 trees being nursed back to health are labelled with red stickers, meaning they are in the worst shape among the 949 yang naa lining both sides of the road.

More than 300 of the yang naa were suffering to varying degrees from a lack of proper nutrients, Mr Banjong noted.

He said the conservationists were removing 2x2 square metres of concrete from around each tree to expose more soil underneath. After that fresh soil mixed with fertiliser up to 50 centimetres deep is spread around the tree.

The soil also contains mycorrhizae, which forms a network of filaments that allows the roots to draw nutrients from the soil they would not be able to do otherwise.

The fungus-plant alliance stimulates plant growth and accelerates root development, according to the mykepro.com website. 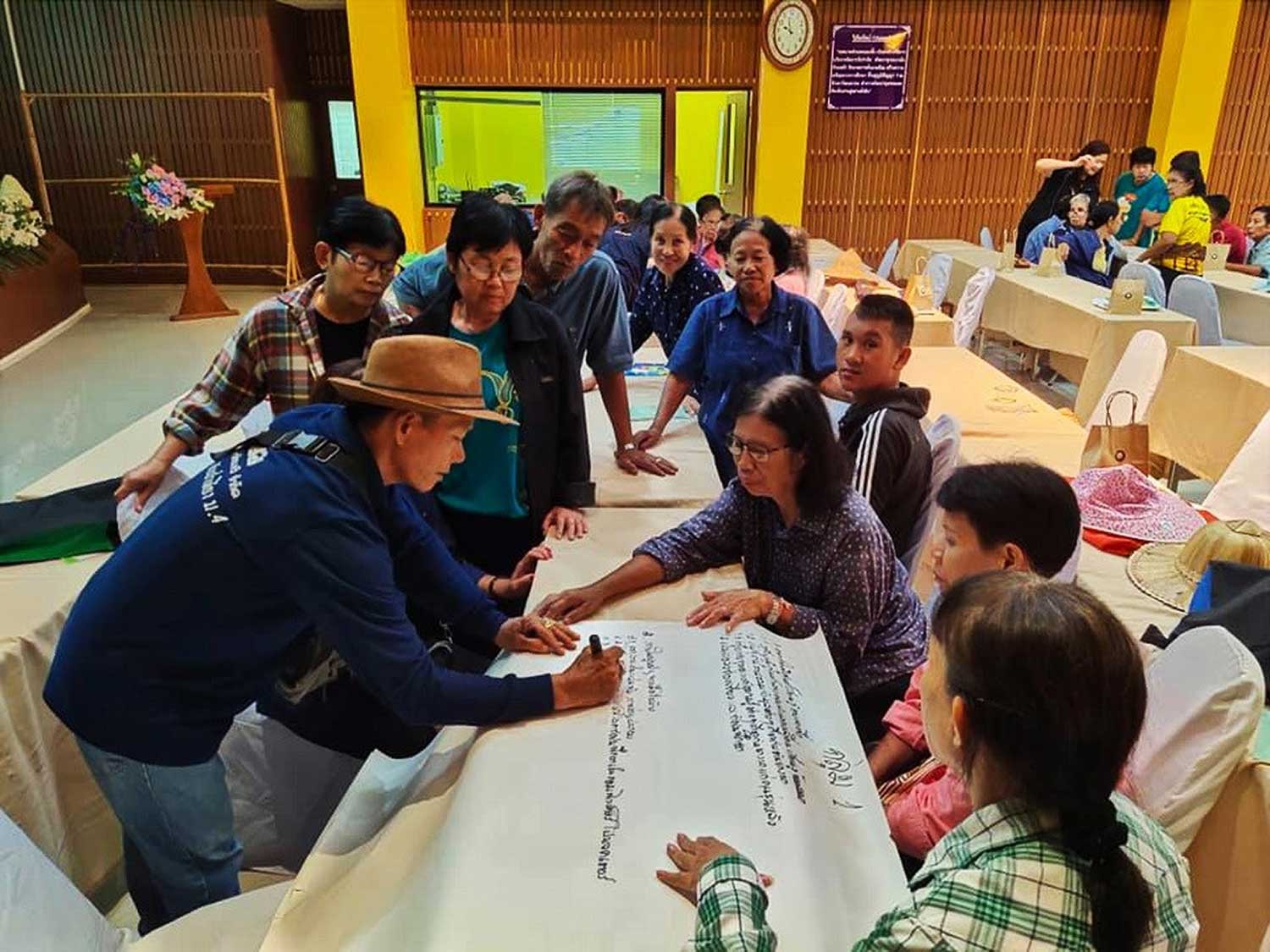 The experts also assess natural underground water levels available for the trees to feed on during summer.

Meanwhile, the trunks of other trees were being patched up after being damaged by the impact of vehicles crashing into or scraping against them.

Mr Banjong said these rehabilitation efforts would never have come to fruition without local residents getting in on the act.

The trees, when surveyed by the expert, were accompanied by residents who were shown the correct way to care for the trees. "A lack of proper knowledge would have destroyed them," he said.

First and foremost, Mr Banjong stressed that locals had to be made aware of how critically important trees are for the environment. What followed was how they could participate in the work to restore the trees and preserve them.

"There is a methodology to follow even for pruning. It might sound complicated but it isn't when you understand the basic anatomy of trees and how they function in nature," he said.

"We're training local residents to be arborists in their own right," he added.

Every step of tree conservation is now joined by local residents who include youngsters.

"The coming together of local people has created a tremendous collective energy that is built on the strength of the communities," Mr Banjong said.

The concept of communities taking control of the protection of the valuable trees led to the formation of the so-called "yang naa council" whose members are represented by residents to manage tree restoration.

Several municipalities: tambons Nong Hoy, Nong Pheung, Yang Nerng and tambon Sarapee are collaborating in tree restoration and preservation efforts. Their help is essential since they are in charge of public utilities and infrastructure including the Chiang Mai-Lamphun road which directly impacts the trees.

The yang naa-fringed road is also recognised by the Culture Ministry as one of the nation's most outstanding arboricultural heritage routes.

Chiang Mai governor Charorenrit Sanguansat said the yang naa are the reason the road is unique. They form a picturesque visual landscape and plans are afoot to open a learning centre nearby to provide knowledge about yang naa to visitors from other areas.

To stave off any local resistance to the trees, a fund is to be established to provide compensation for any damage to property or injuries caused by falling branches, according to Lakkana Srihong, coordinator of the Kiew, Suay, Horm Network.

She said the fund is registering members from households within the five municipalities where the trees are located.

The members will pay 30 baht per household each month toward the fund with additional contributions coming from the municipalities themselves and several state agencies.

Events such as fun runs and cycling activities may also be held in the near future to raise money for the fund, Ms Lakkana said.

Narumol Klangvichian, a volunteer arborist, said people from other areas have also signed up for the yang naa restoration project after finding out about it on social media.

Divine intervention has also been sought to protect the trees, with a rite held recently to "ordain" the trees by wrapping them with saffron robes.

The Buddhist ceremony symbolises giving the trees a new lease on life. The rite is also tied to the belief that a guardian angel dwells in the yang naa and felling them would be tantamount to killing the angel, a misdeed that brings ill tidings upon those who do it.

"Locals being emboldened to protect the yang naa have led to stronger communities," Ms Narumol said.

Historical records reveal that the first batch of yang naa were planted near the landmark Naowarat Bridge in Muang district of Chiang Mai by Chao Phraya Surasee Wisitsak, the governor-general of the Phayab region, in 1882.

Twenty-nine years later, the provincial office handed locals yang naa saplings which were grown along half the length of the Chiang Mai-Lamphun road. From the Lamphun side, the authorities planted sadao (Neem) trees along the road until they met the yang naa at the borderline.