The lure of a quick baht
Thailand
Special Report

The lure of a quick baht

Despite media coverage, many still flock to invest in dubious schemes

The high profile and number of victims in the alleged Mae Manee and Forex-3D Ponzi schemes raise the question of whether netizens' increased awareness is an effective shield against such decades-old tricks. 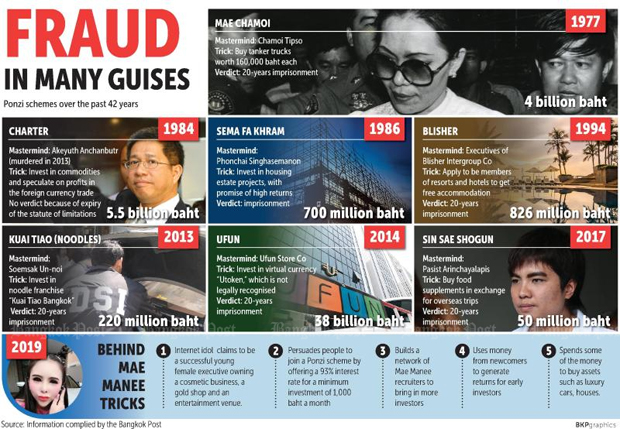 Both these apparent deceptions worked equally well on people from almost all walks of life from blue-collar workers to university-graduate employees to people with cautious minds.

Indeed, while many people are aware that these so-called schemes are most likely scams -- a fact hard to miss given the prevalence of media reports on the recent spate of Ponzi hustles -- many told the Bangkok Post they had hoped to find themselves at the top of the pyramid rather than numbering among the many victims.

For most who are lured by promotions on social media the aim is simple: to rack up high returns at a time when the economy is tepid, wages have stagnated and returns on investments are low. This unhappy economic situation contributes to an atmosphere where scammers barely even have to try to talk people into investing large sums of money in their get-rich-quick (or, more often, pay-off-your-debts-fast) schemes.

At least 4,252 people bought into the sales talk when collectively they pumped over a billion baht into the "Fak Yod Tor Anakhot" (savings for the future) scheme, run by former commercial presenter "pretty" Wantanee "Mae Manee" Tippaveth, according to figures from the Department of Special Investigation (DSI).

And in the Forex-3D case, a group of 1,690 allegedly fell prey to an online firm who promised them handsome profits from foreign exchange trading.

Despite the publicity of other cases where victims have lost significant sums of money as a result unscrupulous con artists and their grand plans, Ponzi schemes continue to spring up and attract reams of investors.

The damage, which stands at 1.3 billion baht, shows many victims were prepared to make big-number investments.

"Everyone joined me because of their greed," Ms Wantanee said, referring to the 93% interest rate she promised her clients.

The 28-year-old, together with her boyfriend Metee Chinpa, 20, were recently arrested in Chon Buri after victims pointed the finger at her for cheating them out of their investments.

"I won't apologise to them. I did nothing wrong. I just didn't give them the interest," was her blunt reaction.

Ms Wantanee has vowed that she will fight the allegations brought against her by the DSI while making fresh promises to return money to the disgruntled investors.

Among the victims is Somphong (last name withheld), a Samut Prakan resident who works as a driver. He was introduced to Mae Manee by his wife who had been following the unusually high rate of return that subscribers claimed to be enjoying.

"It took months for me to believe it," he said.

"I was initially just curious to see whether it would be possible to invest 1,000 baht and get back 1,930 baht within 10 days."

However, his wife had grander plans and jumped in with 60,000 baht of their money. The couple was jubilant when they received a 20,000 "interest" payment within two weeks.

This encouraged them to increase their investment to 260,000 baht soon after.

Once again, Mr Somphong's doubt were eased when he learned that his cousin too had enjoyed earnings from the scheme.

He was also reassured by Ms Wantanee's profile on her Facebook page and the confident rhetoric she deployed to catch the attention of new recruits.

Unfortunately, it was not more than a few weeks after he and his wife had poured their life savings into the Mae Manee scheme when Ms Wantanee and her boyfriend were arrested and reports of investors losing large sums of money began emerging.

Mr Somphong said he's still hopeful that he can retrieve the rest of his savings but has learnt the painful lesson that there is generally no such thing as easy money.

Even those who thought they were ahead of the curve, such as Chanchira (surname withheld), who initially invested 300,000 baht knowing it was likely a Ponzi scheme, but hoping to do well, ran afoul when the police froze all assets related to the scam.

In fact, at that point, she had persuaded family members to follow suit and her mother-in-law had invested an 800,000-baht mortgage taken out on her paddy field.

Unfortunately, both women have yet to receive any of their money back since the scam came to light.

If a 93% return is too good for sceptics to believe, the question becomes whether healthy but believable rates of return can be used to swindle them out of their savings.

In the Forex-3D case, even relatively logical judgements based on the rationality of returns did not help people escape from scammers.

Worakamon (last name withheld), an accountant at a company in Bangkok's Phloenchit area, had never expected she would be a scam victim.

After being introduced to Forex-3D by her friend, she researched foreign exchange trading online and carefully checked the company's background.

"Its promise of a 10% interest rate didn't seem like that of Ponzi scheme," Ms Worakamon recalled.

With this reason in mind as well as the company's four-year track record in the industry, she decided to invest 100,000 baht.

It appeared Ms Worakamon made the right decision when she quickly received a return of 25,000 baht.

This induced her to add more money. However, she received no further payments after that first one and has been unable to draw out her earlier investment.

Ms Worakamon and over 1,000 other victims petitioned Justice Minister Somsak Thepsutin to look into their allegations that the company may be operating a Ponzi scam.

The DSI has yet to decide to accept the case against Forex-3D but is currently gathering information from the investors who claim to have been defrauded.

As for Mae Manee, police this week will hand over the details to the department, which was asked to take on the pyramid scheme as a special case due to the large scale of financial damages incurred.

"We expect it will take two months to uncover the money trails," said Piyasiri Wattanavarangkul, chief of the DSI's Bureau of Illegal Financial and Business Crimes.

But even when the case is over, he said he could not guarantee that all the money would be recovered and returned to the victims.