Smell of success: Research conducted by KMITL in August showed 73.6% of respondents went to Yaowarat because of the street food.

Bangkok's street food scene made headlines recently but not for the cuisine on offer. For the last few years, the future of the capital's street eateries has become increasingly precarious after the Bangkok Metropolitan Administration (BMA) -- with the endorsement of the junta-appointed government at that time -- floated a campaign called "Returning Pavements to Pedestrians" two years ago. Part of the action plan involved clearing street food from major areas across 50 districts.

Famous street food stalls, including some well-known spots on Phahon Yothin Road, Soi Sukhumvit 38, and Saphan Lueng on Rama IV Road, have all been cleared, leaving the pavements spacious, especially after sunset.

However, many consumers, the media and academics have lamented the loss of Bangkok's "charm".

Furthermore, the disappearance of street food vendors is worrying some policymakers, economists and the tourism sector.

On the economic front, street food has been a magnet for tourism to Thailand. CNN named Bangkok as the top city for street food in the world in both 2016 and 2017. As part of the grassroots economy, street food provides jobs for low-income earners while also providing city residents an affordable source of delicious food. 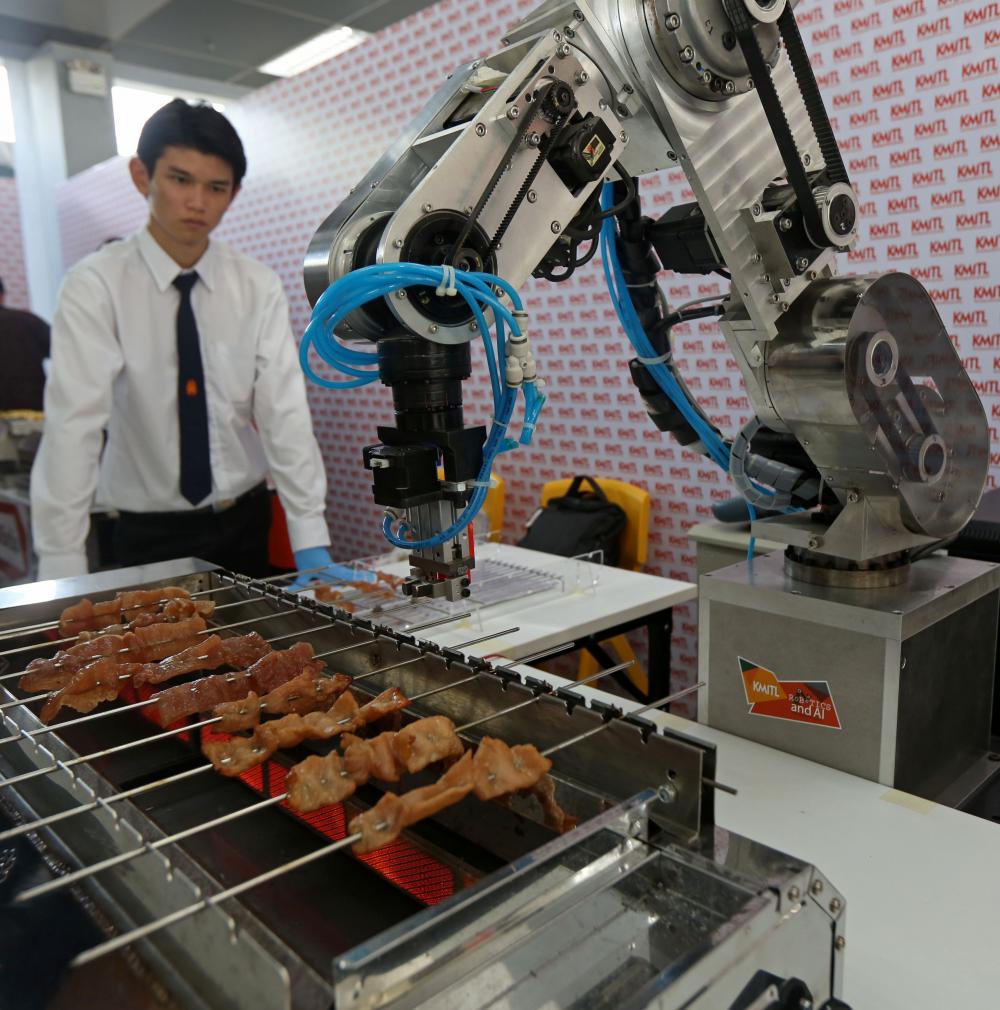 Regardless of the charming image of Bangkok's street food, it is inarguable that street food stalls need to adjust their hygiene and environmental practices.

The latest attempt to help street food vendors modernise is a pilot project being tested by King Mongkut's Institute of Technology Ladkrabang (KMITL).

On Oct 2, KMITL held an event to showcase the university's research relating to innovative projects to improve street food vendors.

During the campaign, innovative designs for street food carts were displayed. Among them was a fruit selling cart designed to improve hygiene, a smoke-filter-fitted moo ping (grilled pork) cart, a smokeless grill roaster and a robotic moo ping seller.

"KMITL is ready to offer itself as an institute for providing knowledge to help street food vendors. Indeed, we are opening an academy covering food vendor subjects as they form a valuable part of the Thai food industry," KMITL's president, Prof Suchatvee Suwansawat told the Bangkok Post.

These food cart innovations were made in collaboration with the Faculty of Agricultural Industry, Faculty of Engineering, Faculty of Architecture and Faculty of Marketing. 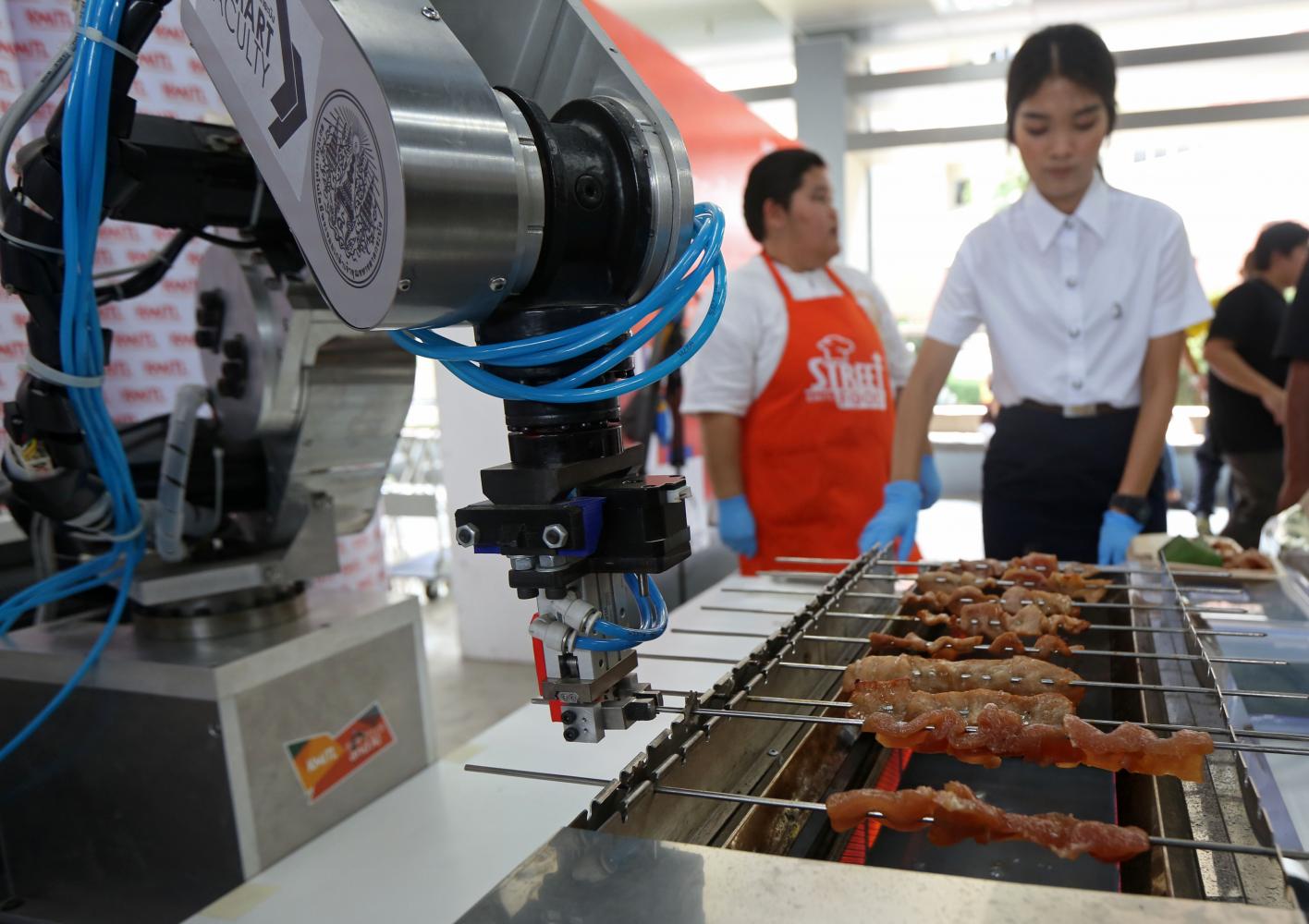 Prof Suchatvee said the academy will arrange courses for operators who wish to upgrade their businesses. Courses will include training in areas such as food hygiene, Halal food standards, investment advice and e-marketing.

"KMITL's next step is to launch a project to improve street food in Yaowarat," he said, adding the project will take one year to complete.

The scheme is expected to start next year.

The project will be similar to KMITL's effort to help vendors on Pad Thai Road in Chumphon province to improve standards and hygiene.

In August this year, KMITL conducted field research by collecting data from visitors to Yaowarat, known as Bangkok's Chinatown in Samphanthawong district. The area is famous for its street food scene.

The campaign is headed by Asst Prof Naphatrapi Luangsakul, head of research and development at the Food Industry Centre in the Faculty of Agro-Industry at KMITL. 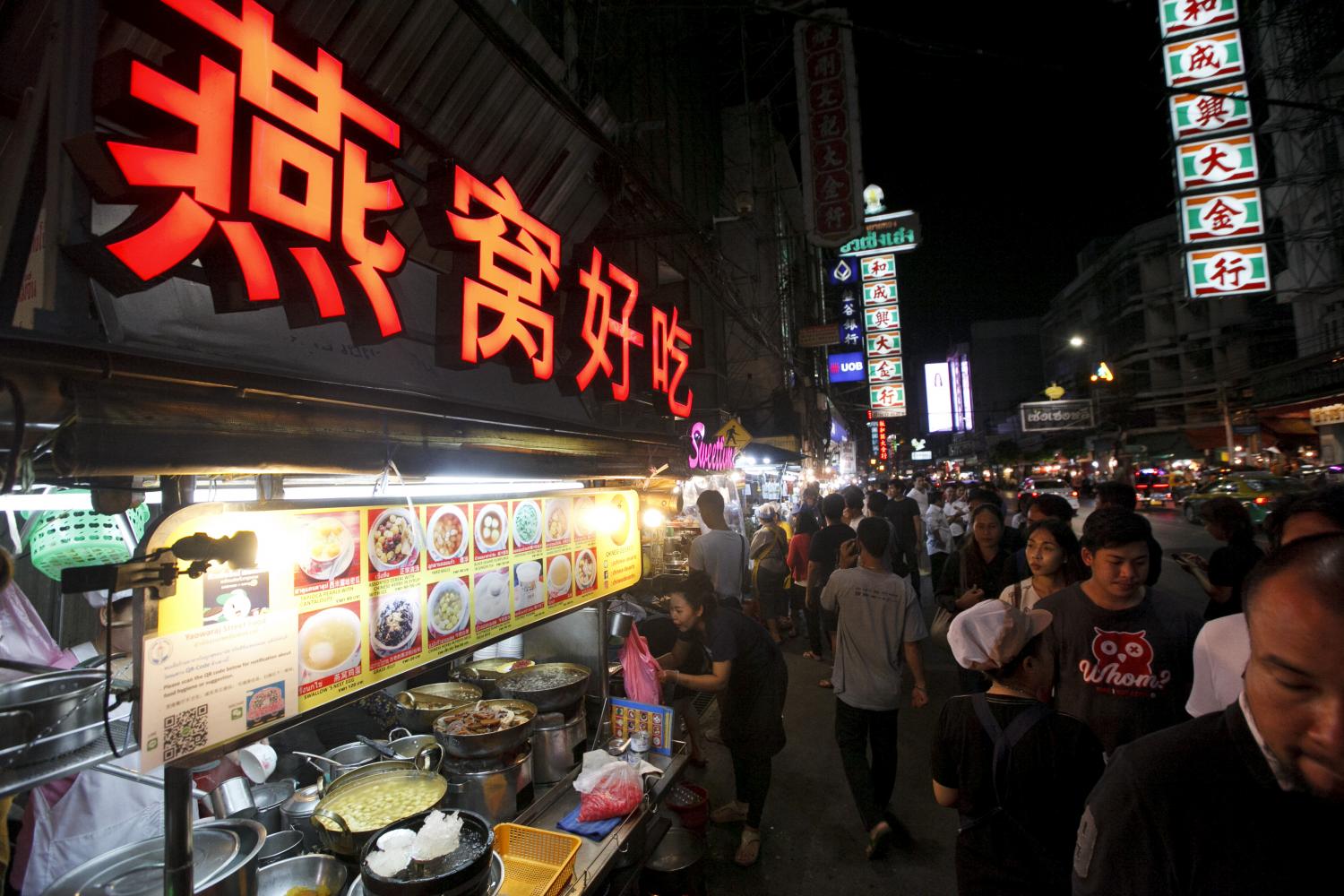 Some 73.6% of respondents told the team they were visiting Yaowarat because of street food, 10.3% said they were there to pray at temples, 10.3% for visiting cultural sites and 4.6% for gold trading.

Each respondent said he or she spent 200-500 baht per each meal, and 60.2% of them obtained information on food from the internet. Some 84.3% often went there during the evenings.

Some 87% of them, despite enjoying the food, wished the food vendors would improve their hygiene standards and signage. They said the menus on the side of the carts should be written in more than one language.

They also wanted a state-accredited body to regularly check food hygiene and provide certificates for vendors to display at their carts.

On the other hand, almost 45.8% of food vendors in Yaowarat, according to the research, are family-inherited businesses. At least 87% of vendors are small-scale business owners and 56.5% hold university degrees.

Some 45.8% of the street food vendors interviewed in Yaowarat said they wished to have better equipment such as light-weight carts with sturdy wheels and energy-saving lamps.

"Although research said consumers desire improved hygiene standards from the vendors, the food sellers themselves still do not have much knowledge about nutrition or hygienic cooking practices," said Asst Prof Naphatrapi.

Asst Prof Naphatrapi said that KMITL will apply the experiences gained from helping street food vendors in Chumphon to those on Yaowarat Road. 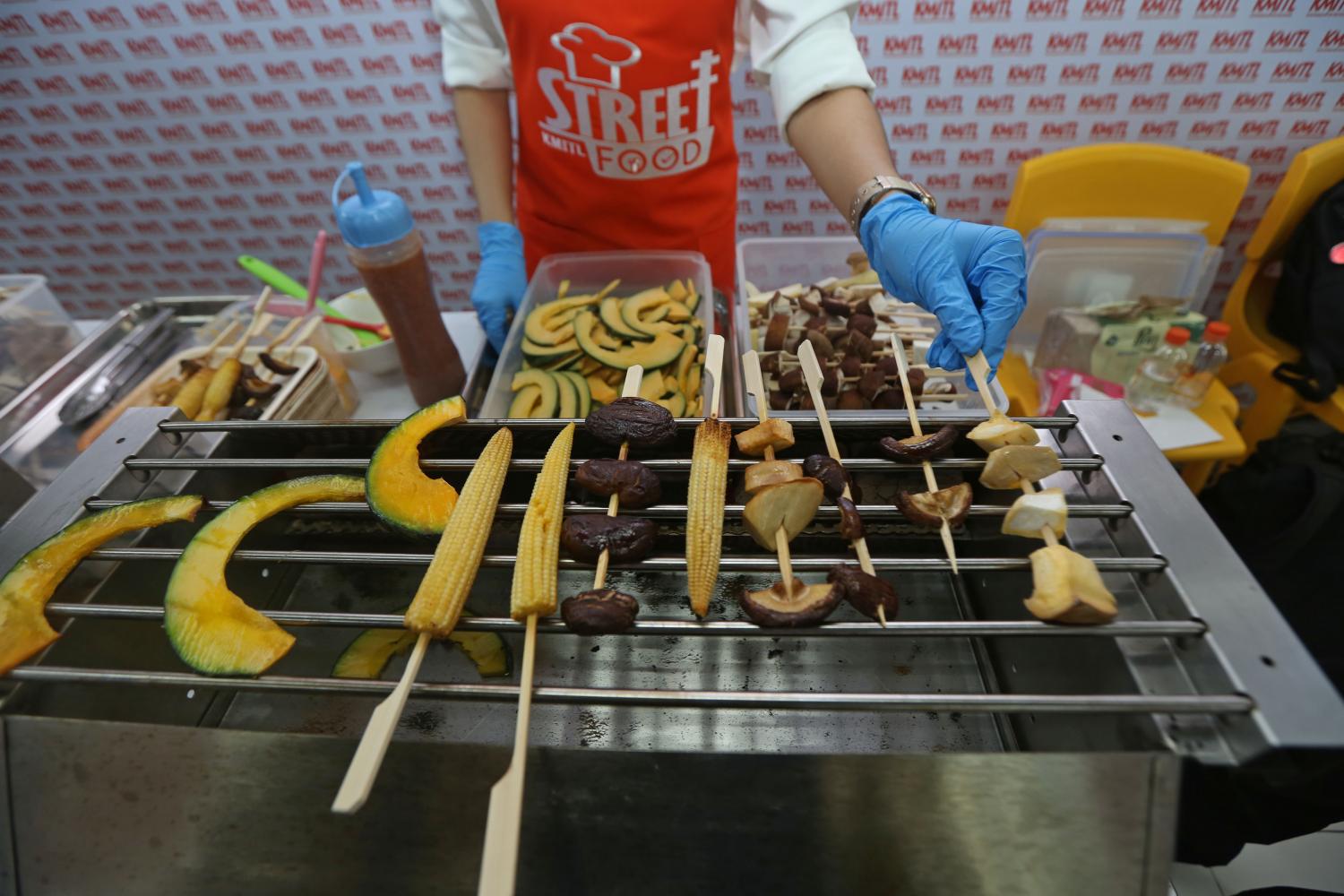 No smoking policy: Students try a zero-smoke BBQ cooker at a seminar at King Mongkut's Institute of Technology Ladkrabang.

The project was funded by the Ministry of Interior and ran from January to September 2018. KMITL went to visit the local authorities in Chumphon and investigated street food standards along Pad Thai Road.

"It took time to develop a rapport with these vendors and we had to be patient until we had earned their trust," she told the Bangkok Post.

At first, 40 vendors registered for the project, but the team decided to accept only 25 initially. "We were only interested in working with those vendors who were enthusiastic to learn. We dismissed 15 from the scheme because they sent their employees to attend workshops and did not attend themselves," she said. 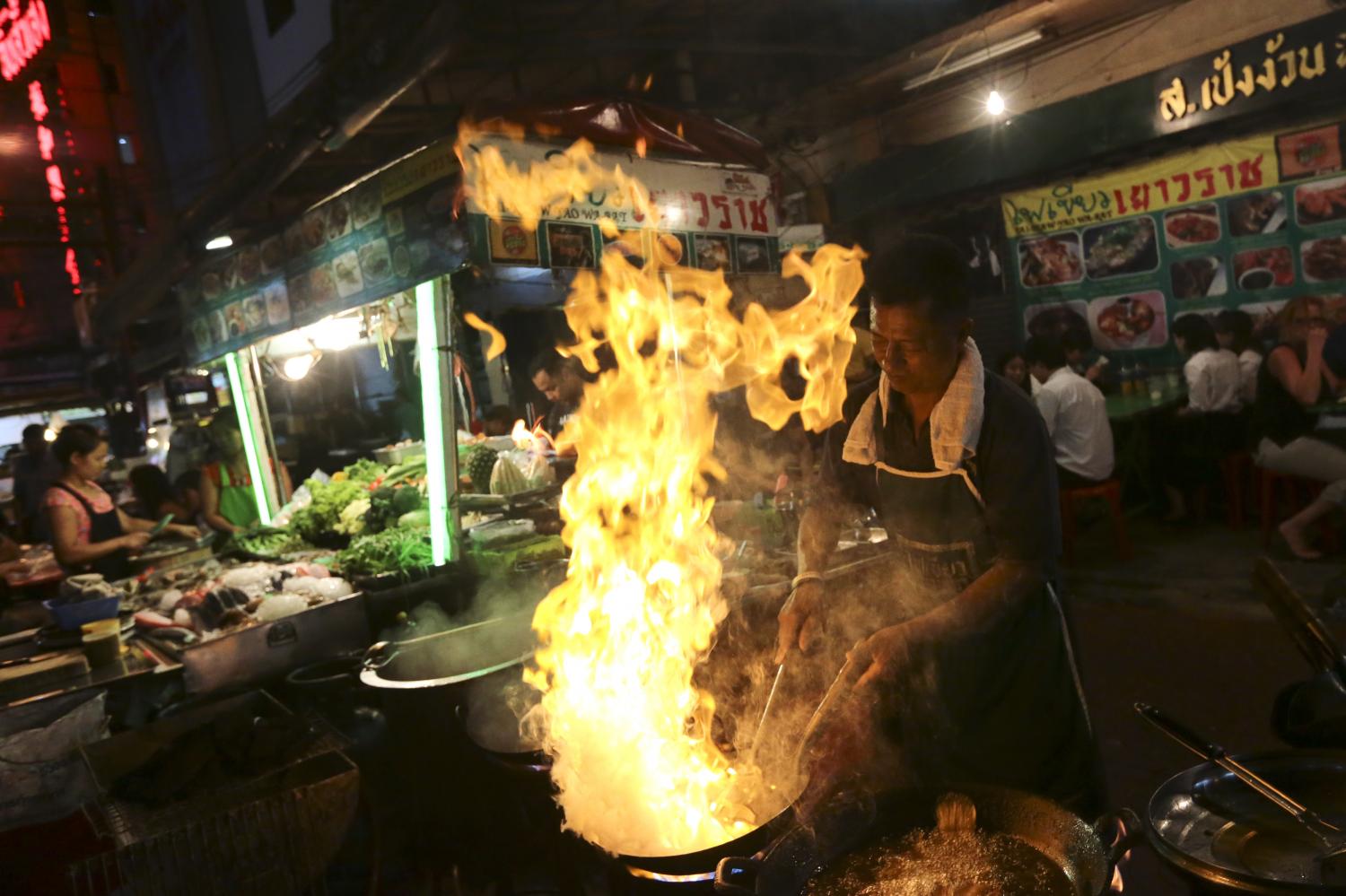 cooking up a storm: Vendors prepare food on Yaowarat Road.

Under the project, researchers from Chulalongkorn University and KMITL checked hygiene and safety standards in their kitchens and food preparation processes.

"We also shared information about new technology to preserve food and suggested that they use only ingredients approved by the Food and Drug Administration," she said.

KMITL also designed food carts for these vendors that provided more space and were easier to clean and move. Some also had fans installed if their cooking involved excess hear.

Recipes were also improved to enhance taste and nutritional value while retaining the distinct ingredients such as Bai Leang -- a local vegetable often used in spicy Thai southern cuisine.

Dinner on a budget: Foodies spend 200-500 baht per meal on Yaowarat Road.

Researchers also helped introduce new unique exotic fruits for food vendors to sell such as the Malacca Queen (Sawee), a type of pineapple named after Sawee district of Chumphon province.

She said the Yaowarat instalment requires collaboration with the BMA and various departments to encourage street food sellers to realise the significance of the project.

"We are going to open culinary courses for those who are interested and provide innovation to enhance the charm and safety of local street food.

"When they finish the course, we will issue a certificate they can display to make tourists feel more confident when sampling street food at Yaowarat. The project will be perfect as long as everyone cooperates with each other," she said.

The Industry Ministry has set a target to increase industrial productivity by 2.2% by 2022 and raise Thailand's competitiveness by enhancing labour skills and leveraging technology and innovation.