The pollution paralysis: Thailand's structural inability to clean up its air

Government lacks political will to address real causes of the problem.

Unhealthy journeys: Kanyarat Chaksuwong, her husband and three-year-old daughter have endured a 60km commute by motorcycle from their home in Samut Sakhon province to Nakhon Pathom for years.

Air pollution has blanketed Bangkok and most of Thailand again this month. As expected, the government has responded with the usual raft of contingency measures, but nothing to address the problem at its root.

The Bangkok Metropolitan Administration's prototype air purifier which was installed in the heart of the city earlier this month generated headlines, but the device is seen as too little too late.

Many fear the upcoming winter will bring a return to the nasty air quality that topped the world's hazardous breathing indices earlier this year -- and experts concur.

For years Kanyarat Chaksuwong and her husband have undertaken a 60-kilometre round-trip commute from their home in Samut Sakhon province to their workplaces in Nakhon Pathom.

"We know that the dust and traffic fumes are toxic and getting worse, but we have to work every day," Ms Kanyarat said.

She challenged anyone who believes the government has been genuine in its policy to reduce air pollution from its major source, to try joining her family on the commute.

"It's not just the disgusting exhaust fumes we still have to breathe that are pouring out of old cars, trucks and buses, but the black clouds coming out of factories that are unchanged too," she laments.

Despite the Ministry of Transport last month deploying officials to monitor polluting vehicles and remove them from the streets, little attention was given to stopping the problem at the source, Ms Kanyarat observes.

In just the first two months of this year, another 180,000 new vehicles were registered in Bangkok with the Land Transport Department.

Likewise, while local governments attempted to implement a ban on outdoor burning, national agricultural policies continued to promote the expansion of the industries that rely on it. Two million rai of corn crops were added to the agricultural sector between November 2018 and February 2019.

NO POLITICAL WILL, NO REFORM

Vehicle exhaust fumes from incomplete combustion have long been known to be the major source of PM2.5 pollution in Bangkok. Correspondingly, stringent emission control standards have regularly been discussed as a major strategy to help cut the problem at its origin.

Mr Supat cites the feeble efforts to upgrade engines and reduce sulphur content to meet the Euro 5 emission standard as just one example.

Essentially, the Euro 5 standard will limit the sulphur content to 10 microgrammes per cubic metre (µg/m³), or a fifth of the Euro 4 standard which Thailand has used since 2010.

"The implementation has been delayed for 13 years from our first scheduled date," he recalls. "Some businesses didn't want to make new investments, so they lobbied the government to postpone the plan until 'they were ready'."

The implementation of Euro 5 emission standards, which have been in place in South Korea for a decade, is still underway here. Only last year, after three years of negotiation, did oil refiners agree to comply, and even then, they demanded and received a five-year grace period.

"Compliance should have started in 2022. However, as of now there is still no resolution from the National Environment Board acknowledging the mandatory upgrade," he said.

Mr Supat doubts recent media reports that Euro 5 standards may be implemented sooner. "At the end of the day, it's up to the political will of those lawmakers. They have to bang on the table and send orders down to the operating levels to start doing something," he stresses. "Since we are not taking it [pollution] seriously, it will come again at the end of this year, and reoccur every year thereafter."

Last year, the University of the Thai Chamber of Commerce's (UTCC) Centre for Economic and Business Forecasting revealed that financial loss caused by health-related expenditure and reduced tourism might be as high as 6 billion baht, based on a two-month estimation during December last year to January this year -- during the height of Bangkok's air pollution problem.

The centre estimated the city's population of 15 million spent 600 million baht in total to buy standard face masks over the course of two months, and 800,000 people would have needed to visit a hospital because of the air pollution.

Including medicines purchased, these hospital visits would have cost 800 million baht in total.

Mr Supat said it is an unfair scenario when victims of pollution, rather than the polluters, end up out of pocket.

"And when you don't tackle the problem at its root, it's expensive to solve the problem and regulate. Even worse, it is too easy for polluters to dodge their responsibilities. After all, it is the polluters who should pay," says Mr Supat.

One of the measures that the PCD is using to make polluters pay is imposing strict air quality standards.

However, the agency has set its PM2.5 "safe" thresholds at double the level recommended by World Health Organisation (WHO) guidelines.

WHO guidelines say that a person's average annual PM2.5 exposure should not exceed, on average, 10 microgrammes per cubic metre (mg/m³), and that exposure during any 24 hour period should not exceed 25 mg/m³). 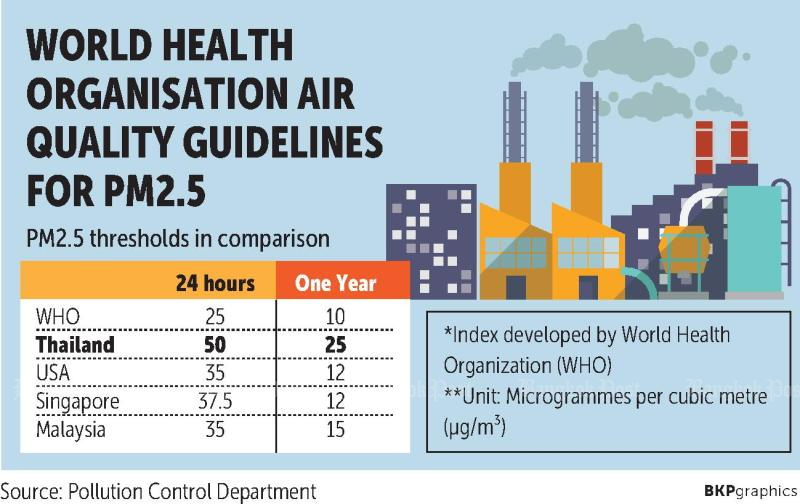 "By now, the Pollution Control Department should have reduced the allowable concentration of PM2.5. With Thailand's average annual levels below 30mg/m³, we should be able to tighten our standard from 50mg/m³ down to 35, which is the same level as the United States. And the next goal should equal the World Health Organisation's 25mg/m³ standard," he says.

Dr Sirima notes that National Environment Board insists such revisions are unnecessary because air pollution in the city will be reduced once a more "sustainable transportation system" -- subway, skytrains and electric buses and vehicles -- is fully in place.

The board also claims that insufficient data exists to justify such a move, and more data should be gathered for another 6-7 years, during which time Thailand's PM2.5 levels will fall. Therefore, new regulations, which could affect key economic sectors, won't be needed.

Such inaction is unacceptable, says Dr Sirima. The Pollution Control Department is obligated to revise and improve the national air quality standards every five years, but has done nothing since first enacting them in 2010.

"We should pursue a common goal in protecting the health of Thais. It does not mean we must do everything at once right now, but we have to have a goal."

If one needs evidence of the government's disinterest in environmental quality, just look at the lack of money, says Dr Witsanu Attavanich from Kasetsart University's Economic Faculty.

"The [budget] numbers clearly show that environmental protection is not a government priority," Dr Witsanu observes.

"They focus only on economic stability and growth. In the government's expenditure budget from 2015 to 2019, economic-related expenditures rank second after administrative expenses, whereas the budget set aside for environmental protection is extremely small."

"Air pollution levels have remained dangerously high in recent years, and do not seem to be improving. It is because we focus only on economic development and pay less attention to environmental protection and conservation. Certainly, the economy has clearly improved, but the question is, is it sustainable?" Dr Witsanu asks.

Residents in and around Chiang Mai should expect about a four-year reduction.

In less than a generation, Thailand has moved from a low-income to an upper-middle-income country. "So in economic terms, we must not only think about efficiency of resource management," argues Dr Witsanu. "We should shift our attention to the environment and, not forgetting that our decisions today will affect the next generation, bring fairness into the equation every step of the way."