The cops who opt to die
Thailand
Special Report

The cops who opt to die

Support at hand: A police officer checks out the 'Depressed? We Care' Facebook page dedicated to helping police and their families.

Police officers are perceived as guardians who protect life. They are projected as tough guys with guns who catch criminals and make communities safe. Yet shocking statistics of their suicide in Thailand show our guardians can be vulnerable and need help too.

Last year the World Health Organisation ranked Thailand 32nd of 183 countries for suicide rates. On average, up to 14 out of 100,000 people kill themselves yearly.

But these numbers suddenly appear low when compared with those among police officers.

"The police suicide rate is too high," Pol Col Winai Thongchai, a psychologist at Police General Hospital, said. Since 2008, 396 policemen have taken their own life, or about 18 of 100,000 officers a year.

The alarming figures even prompted national police chief Chakthip Chaijinda to divert his focus from arresting bad guys to take a look inside Royal Thai Police's work conditions and the well-being of his subordinates.

In October, Pol Gen Chakthip held a meeting about the suicide rate among police and invited doctors and psychologists to offer their input in finding solutions. He made the issue a major agenda item. In the first nine months of this year alone, 19 cops took their own lives. As a result, a special 12-member committee was created to handle the problem.

On Nov 26, Pol Gen Chakthip wrote to heads of every department and division ordering them to follow up on the campaign to prevent their subordinates from committing suicide.

The campaign comprises three phases. First is locating cops who are vulnerable to committing suicide, second is creating a system to oversee mental and physical health as well as any debt problems they have, and third is opening a special centre at Police General Hospital designed to prevent police from committing suicide.

According to a Royal Thai Police (RTP) study, most victims were officers with the ranks of sergeant major and senior sergeant major, who worked in crime suppression, according to Pol Col Winai.

Many of them snapped because of personal problems, such as family conflicts, followed by huge debts and illness. All these problems share the same deep-level cause of poor mental condition, notably depression, said Pol Col Winai, who sits on the panel.

The study also found suicides usually occur among officers aged 25 and over. When they reach their 50s, illnesses tend to play a bigger role.

The statistic is reflected in the latest case of Pol Lt Suriya Yenphasuk, a 58-year-old deputy traffic inspector in Samut Songkhram's Muang district. He was reported missing from his home in mid-November, and found dead on Dec 3 in a gateman's box at Samut Songkhram Municipality office.

A letter he wrote before shooting himself dead says: "My body can't go on and I don't want to be a burden," referring to his long battle with autoimmune disease, or systemic lupus erythematous (SLE).

Hopelessness and depression are likely to encourage officers to resort to suicide. 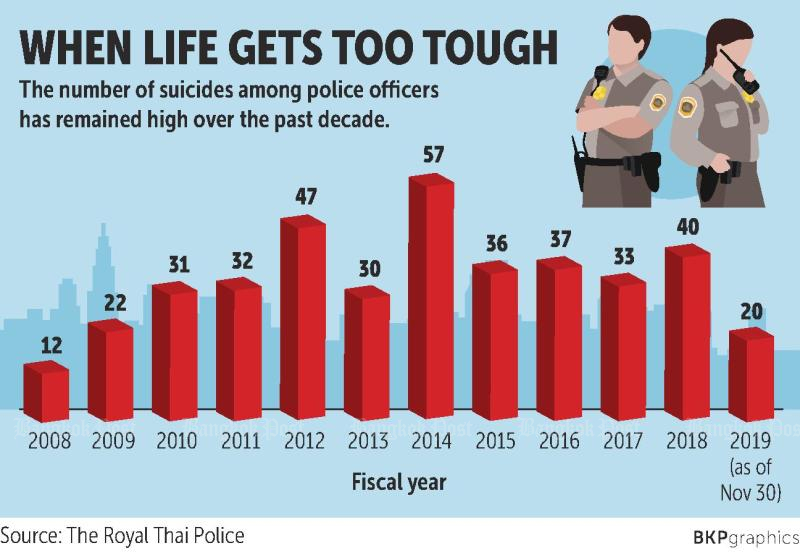 When these states of mind are met with the weapons they carry and, in many cases, alcohol, a sudden impulse to kill themselves will easily follow, said Pol Col Winai, also deputy chairman of the Thai Clinical Psychologist Association. Policing is already a stressful job but is also paired with knowledge of weapons, which can have fatal outcomes.

Marriage breakdown, often caused by the little time officers spend with their families, also makes their lives prone to a tragic ending.

"Cops can be very lonely," he said.

"When they are stressed from work, they need family support ... someone to care for them, but if they have family problem, they can be very lonely."

''Work stress, family problems or even debts can drive cops to drink, as a tactic to suppress problems,'' he said.

"But with a gun in their hand, they can become depressed and snap," he said.

Workload, personal problems or even health problems can lead to cops becoming victims of depression. Yet another emerging factor that drives many cops to take their own lives is when they are transferred to positions as inquiry officials.

Seven of 20 officers who committed suicide From Jan 1 to Oct 15 this year were inquiry officers. Most of them were transferred from other divisions. The trend is unprecedented, following restructuring in the RTP in 2016.

The order issued by the now-dissolved National Council for Peace and Order to restructure part of Royal Thai Police Office put inquiry positions on the same line of command as others.

As a result, many cops are likely to be rotated to man inquiry desks.

In the RTP, working as an inquiry official is a tough job with not much opportunity to create a profile.

Most work at a desk and return home late and their work comprises listening to victims who file complaints. They risk being sued if they make a mistake in writing up legal cases, according to Pol Col Winai.

Inquiry Official Association of Thailand chairman Phon Kaeochang said families of victims ordered to work in the inquiry field referred to the transfer policy as an "order to kill" their husbands or fathers.

Pol Lt Col Phon said letters that victims wrote to their families indicated that their new role as inquiry officers was too stressful for them with due to their lack of skills and unwillingness to work in this area.

"Some killed themselves even before they attended training sessions," Pol Lt Col Phon said.

Usually the officers were given this job due to a lack of manpower. But many officers do not possess interrogation skills and don't have expertise in law.

"He'd once been a cheerful person who laughed easily," the mother of two said. But after the transfer, "he turned into a completely different person who kept quiet and tended to talk to himself."

That happened a few weeks before Pol Capt Phichet shot himself in April.

Life in a new field is tough, Pol Lt Col Phon added. Officers who need training will not receive salaries for between four and six months during what he called an "internship period". 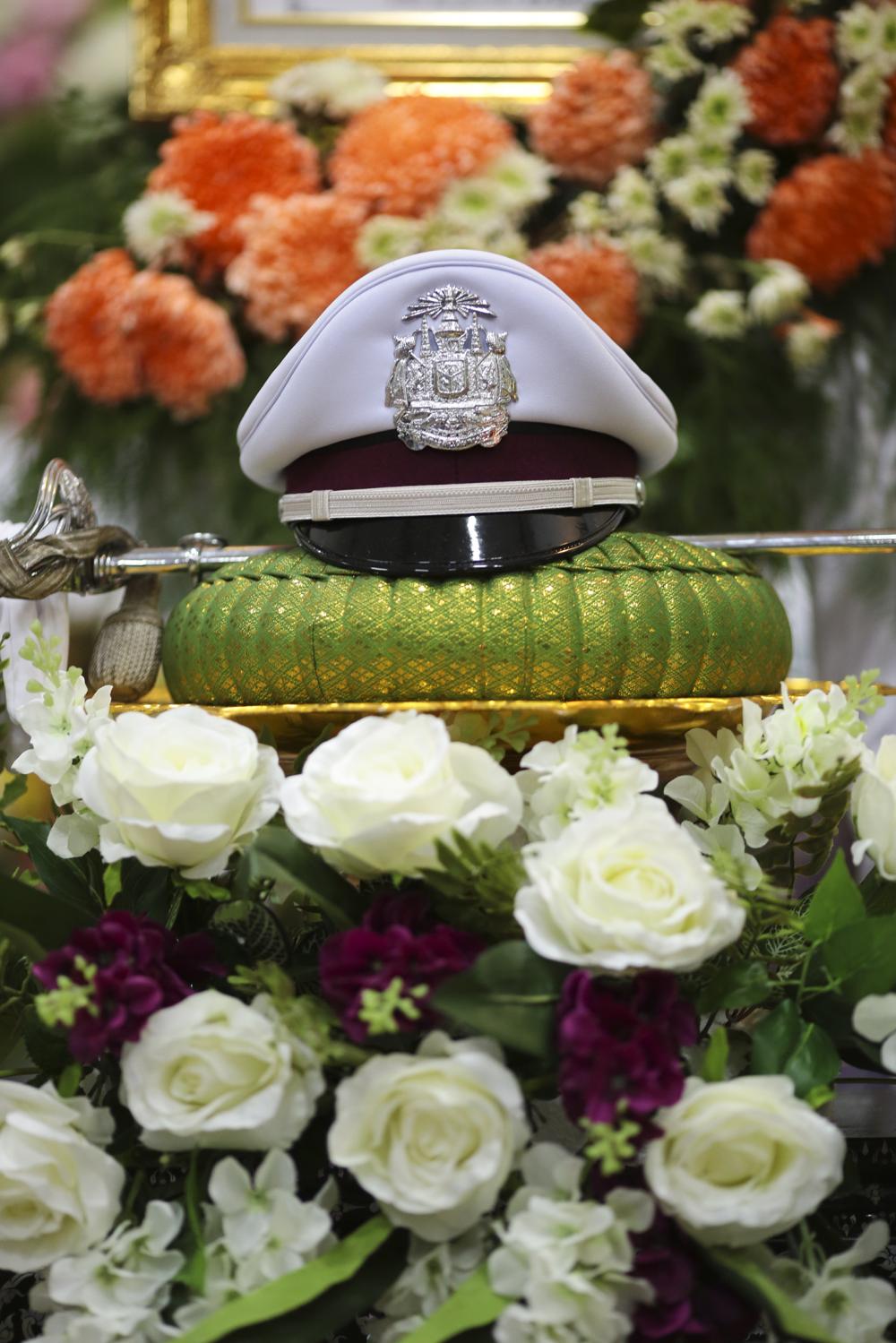 Final farewell: The hat of a police officer who took his own life is placed on a tray in his honour.

This is not to mention stress, especially from their occasional after-work jobs, when they are required to question suspects and forward the cases to the court within a 48-hour deadline. "It's not surprising why they don't have enough time with their families," he observed.

Pol Lt Col Phon said the 2016 restructure led to the unhappy transfers. "The real problem is the imbalance between the arrivals and the departures, which eventually led to a need to transfer more officers in," he said.

"The problem developed into a crisis when officers who don't want to work in this field opt to die as a way out."

The order to have police officers at supervisor and commander levels take better care of their subordinates is part of an urgent measure to put a brake on the suicide rate to prevent the crisis from escalating.

The superiors are required to carry out this mission by observing signs that may lead to suicides, including deep anxiety as well as problems involving families, work and debts.

"If they ignore it and loss of life results, that will be considered negligence on duty," deputy national police chief Manoo Mekmok, another panel member.

Under the measure, each police station will set up a panel to promote better quality of life among police and their families. The committee will be trained to work with hospitals and religious leaders to help prevent the problem.

The Police Education Bureau and Royal Police Cadet Academy will be told to add financial management to the curriculum for prospective police to prevent future debt problems. "We even plan to have the Police General Hospital set up a specific centre to prevent and solve police suicide," Pol Col Manoo added.