Locals are building temporary homes for the rare creatures, conserving and promoting them as a symbol of ecotourism

Peafowls have been listed as endangered, though their numbers are rising in a protected area of eastern Lanna such as Phayao's national parks of Rong Kham Luang, Phusang and Doi Phu Nang. (Photos by Luethaipat Pimonsree)

Human intervention is pushing the green peafowl towards extinction -- but it could also be key to the survival of these beautiful birds.

Locals in Phayao are building temporary homes for the rare creatures, increasing their numbers in one of their few remaining habitats in the country, and possibly the world, say experts.

The endangered species is being conserved and promoted as a symbol of ecotourism, adding to the attraction of Phayao and its neighbouring "Eastern Lanna" provinces of Phrae, Nan and Chiang Rai.

As populations shrink elsewhere, the cluster of provinces is being turned into a global nucleus of green peafowl conservation in an initiative led by the University of Phayao (UP).

UP President Supakorn Pongbangpho said the university has been in talks with Anek Meemongkol, deputy-secretary-general of the National Economic and Social Development, and heads of government offices in Phayao. 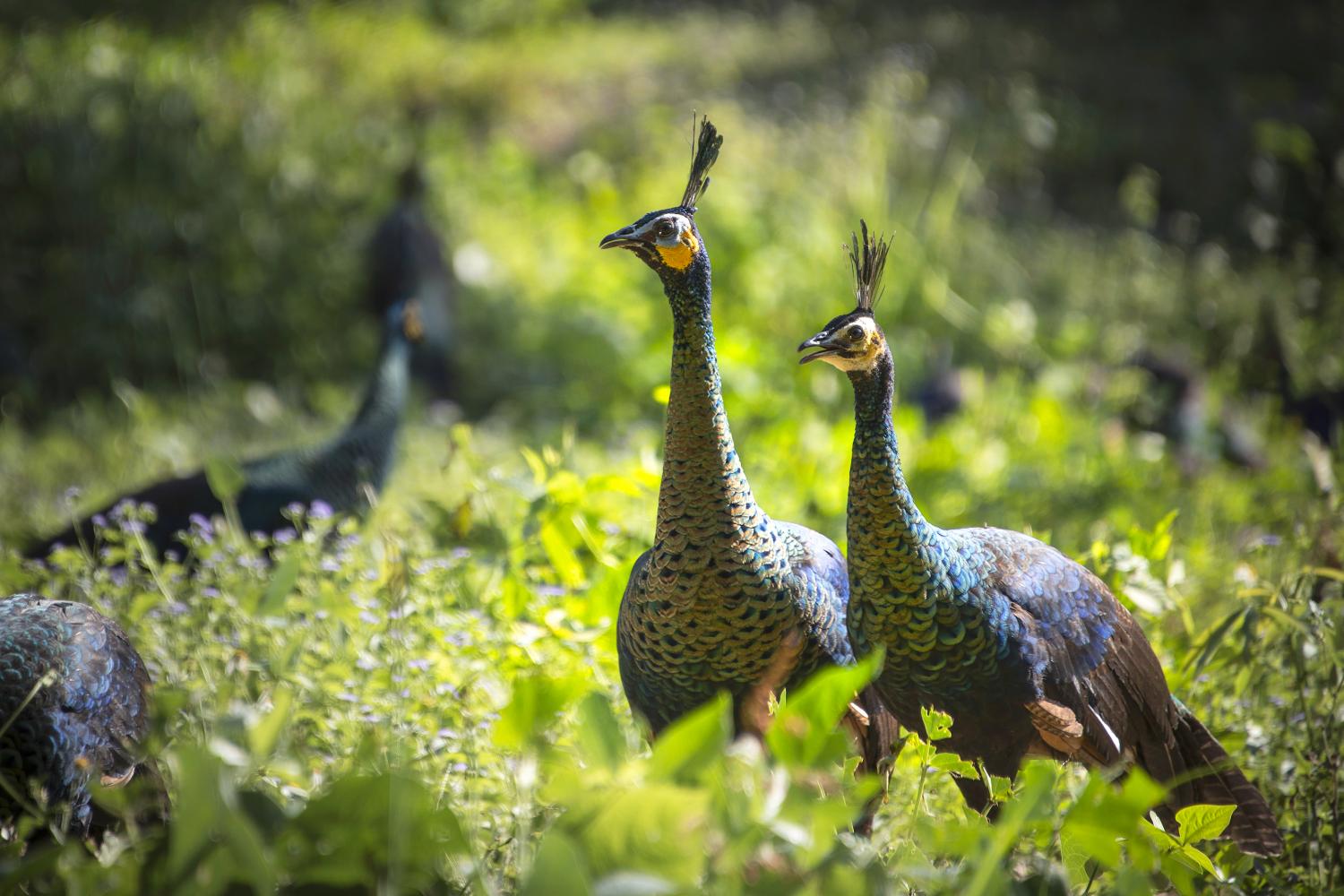 The plan involves stimulating the local economy through the "green peafowl route", a natural habitat which stretches from southern China into the Eastern Lanna cluster via the Mekong and Salween river basins.

Ms Supakorn said the ultimate objective of the route is to raise public awareness of the vital position that green peafowls occupy in the food chain and ecosystem and the urgent need to prevent the birds from going extinct.

Thailand's main habitat for peafowls is centred near Phayao's Rong Kham Luang national park, which is fringed by human activities and close to the University of Phayao.

Green peafowl were once found in abundance across Southeast Asia, India and China, but extensive hunting and encroachment of human habitation have taken their toll. As a result the birds are now listed on the IUCN (International Union for Conservation of Nature) Red List of Threatened Species.

"The number of peafowls has dramatically reduced in countries such as China, where fewer than 200 peafowls are though to remain.

The birds are at serious risk of going extinct in Malaysia and Indonesia," Ms Supakorn said.

However, that trend is being bucked in Thailand where green peafowl populations are rising in the Eastern Lanna cluster, thought to be the birds' last breeding ground in the region.

The UP president notes that if the green peafowls are safe and propagating, it means their habitat is also free of threats to human health too. 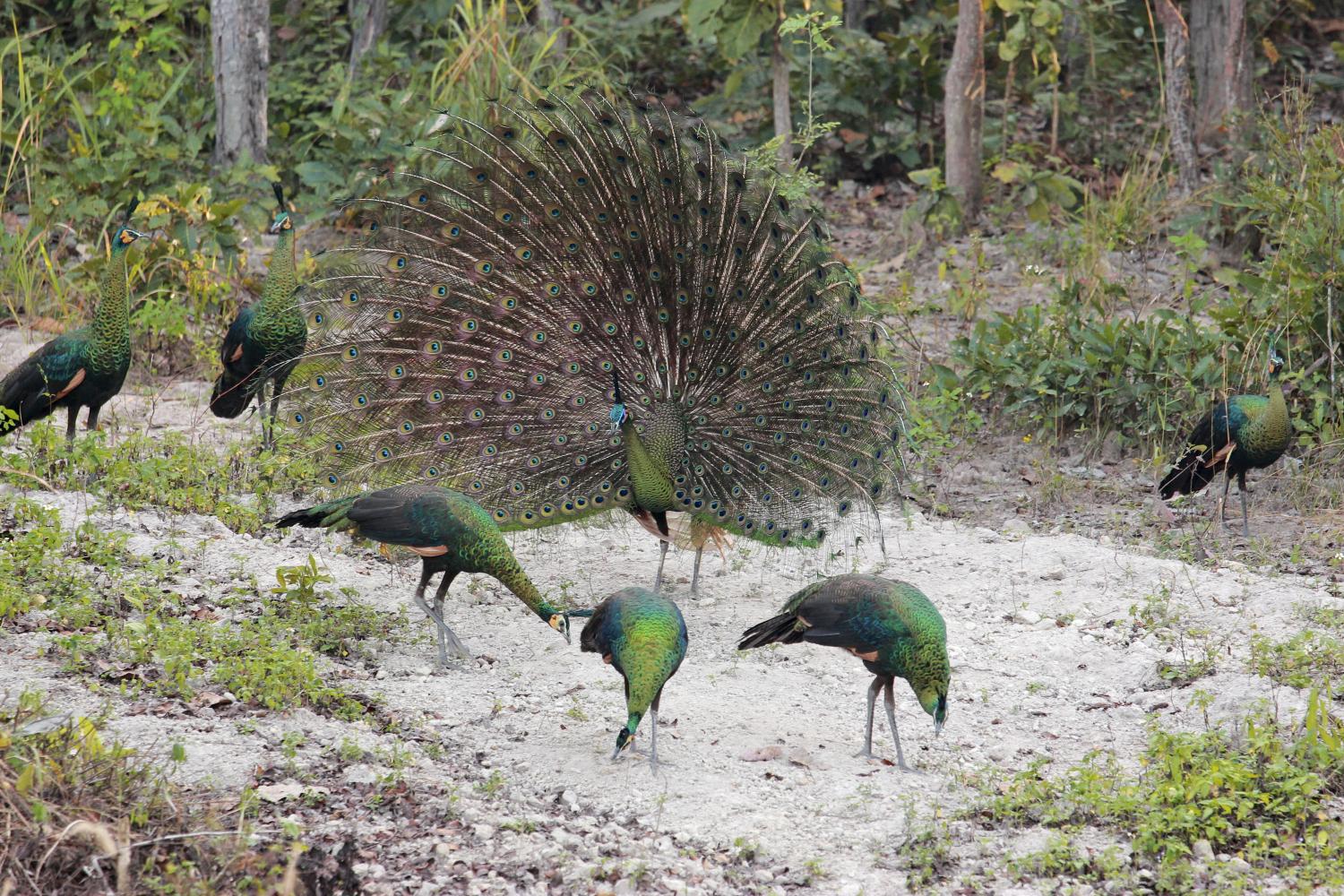 The green peafowl species is found in the tropic forests of Southeast Asia. An adult peacock is around 1.8 to 3 metres in length, while an adult peahen is half the length at 1 to 1.1 metres.

Luethaipat Pimonsree, a UP lecturer who pioneered research on the birds, said green peafowl are interwoven with the cultural roots of Eastern Lanna. Strengthening the bird's status as a proud symbol for local communities could help drive regional and trans-border economic projects, she added.

Ms Luethaipat said her research on peafowls was sparked by reports that the birds were making a nuisance of themselves, raiding farmland near their forest habitat in search of food.

Local residents eventually came up with a solution that involved sharing their space with the birds. The Phayao locals planted crops for the endangered birds to eat and built them nests in tambon Huai Khao Kam, Chun district.

The birds quickly grew accustomed to the man-made surroundings and settled into their new homes amid fields of corn and other nutritious crops. The nests then began to draw tourists and the area was soon doubling as a green peafowl learning centre, she added.

Praison Rahurak, village head of tambon Huai Khao Kam, said the peafowl habitat has pulled in tourists eager to witness the birds habits up close, from nesting to foraging for food.

Before the breeding season, both male and female peafowls emerge from the nearby forest and begin their mating dances, he said.

The male peafowl, or peacock, unfurls his iridescent tail fan in a spectacle designed to lure a potential mate.

After mating, the paired off green peafowl return to the forest where each female lays three to six eggs in a nest built on the ground.

The males lead a solitary existence, although they are fiercely territorial when their "harems" of females are threatened.

When egg-laying season is over, flocks of peafowls leave the forest to look for food every day at around about 4pm, Mr Praison said.

"Some green peafowls are familiar with the sight of tourists. But we need to keep a reasonable distance between the birds and the people.

"We had to erect a barricade to prevent visitors getting too close to the birds. Otherwise the peafowls get scared and fly away," he said.

Apart of tambon Huai Khao Kham, the rare birds also make their home in the Phayao's national parks of Phusang and Doi Phu Nang as well as other protected areas in the province, he said.

The green peafowls are described as among the most majestic-looking birds in Thailand, he added.