Fate of govt hangs on economy

Experts predict a difficult year ahead for a coalition that is running out of ideas in the face of a downturn, writes Nattaya Chetchotiros

A razor-thin majority in the House will no longer be a concern for the government this year, though challenges including persistent economic problems will put its abilities to the test, academics said.

The coalition government led by the Palang Pracharath Party (PPRP) has secured two more House seats following by-elections in Nakhon Pathom and Khon Kaen, giving it 255 seats over the opposition's 244.

This is not to mention certain "cobra" or renegade opposition MPs who will stand ready to vote in support of the government. The New Economics Party (NEP) has hinted it is ready to join the government, provided it receives an invitation from key coalition figures.

Earlier, four NEP lawmakers refused to join a House meeting walkout, giving the government the quorum it needed to shoot down a motion to form a panel to scrutinise executive orders issued by the post-coup National Council for Peace and Order (NCPO). 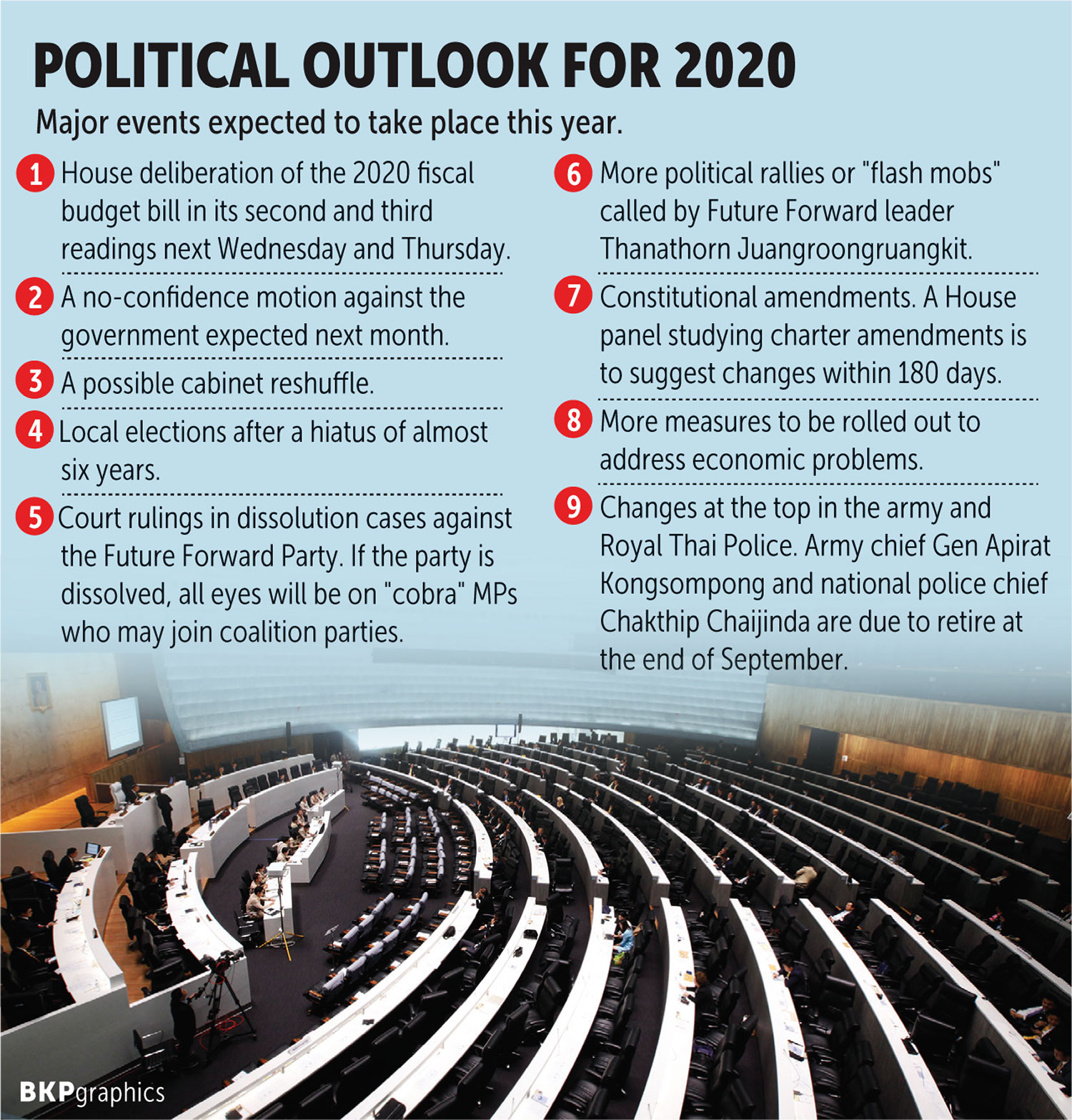 In December, the Future Forward Party (FFP) expelled four MPs who had continually voted against the party in parliament. The renegade members had 30 days to join new parties, or lose their seats.

The government's marginal majority in the House will be strengthened further if the four MPs join the coalition, observers noted. As such, the opposition will now find it harder to put pressure on the government, especially since the FFP is facing dissolution cases in court.

The Constitutional Court will rule on whether to dissolve the FFP on Jan 21 over allegations that it tried to overthrow the monarchy. The court also accepted the Election Commission (EC) request to consider the FFP's dissolution for allegedly violating the law on political parties when it accepted a 191-million-baht election campaign loan from its leader Thanathorn Juangroongruangkit.

Stithorn Thananithichote, director of the Office of Innovation for Democracy under the King Prajadhipok's Institute, told the Bangkok Post that though the government claimed two more House seats in the two by-elections, it still needs support from "cobras" ahead of important motions in parliament, such as the no-confidence motion expected this month, and the crucial budget bill whose second and third readings come next month.

Khunying Sudarat Keyuraphan, the party's chief strategist, has failed to gain acceptance from other Pheu Thai factions, particularly MPs from its Northeast stronghold, he said. The rifts in Pheu Thai will only open the door for the PPRP to find more "cobras", Mr Stithorn said.

Jade Donavanik, a former adviser to the Constitutional Drafting Committee, said while the government will work more freely with the support of renegades from the opposition, the real challenge will be to improve the economy, especially the bread-and-butter issues affecting people's daily lives.

So far, the government has failed to show how it can address economic problems, which are expected to deepen this year, Mr Jade said.

Prime Minister Prayut Chan-o-cha, who heads the team of economic ministers, and his deputy Somkid Jatusripitak, seem to have run out of ideas to cure economic woes, Mr Jade said, adding that politics in 2020 will be linked to the government's ability to tackle such problems.

Mr Sutin said the PPRP still has trouble coordinating with its coalition partners, particularly the Democrat Party, adding the government's failure to solve economic problems will prevent it from winning back investor confidence. "From January, moves in parliament, such as the push for constitutional amendments and the no-confidence debate, will inflict wounds on the prime minister and parties in the coalition, rocking its stability and leading to a cabinet reshuffle. This will be the government's undoing," Mr Sutin said.