RESCUED: Tourists alight from Belgium-flagged cruiser 'La Belle Des Ocean' and thank officers after their ship hit the rocks near Pida islet. They were safely taken to a Phuket port.

Phuket plans to welcome the Year of the Rat later this week not with lion dances and wishes of good luck, but with maritime safety drills as it moves to rebuild tourist confidence.

Its aim is to help tourists feel safe, especially in the wake of the Phoenix tour boat accident in 2018, one of the worst maritime tragedies in Phuket, and an increase in drowning victims last year.

Many travellers, especially Chinese nationals, opted for other tourist destinations after the tour boat crash off the coast of Phuket killed 47 Chinese passengers.

The number of Chinese visitors to Phuket plunged by 20% as a result, which hit foreign exchange earnings and the local economy, officials said.

Despite moves to prevent a recurrence of the tragedy, "there's no agency that can fully restore confidence in maritime travel", Wichat Trairat, deputy chairman of the Thai-Chinese Cultural and Relationship Council, told the Bangkok Post.

Dealing another severe blow to the island was the number of drowning victims soaring to 22 last year, up from just six in 2018, Phuket police said.

As a result, the council and local authorities agreed this year to renew efforts to boost tourist confidence by ramping up safety measures during Chinese New Year, which runs from Tuesday to Feb 2.

The festival will no longer be celebrated by lion dances at the Ao Chalong dock, but will instead be marked with a demonstration of maritime rescue.

However, officials believe that better collective and well-planned action is required to get rid of the negativity that has marred Phuket's image over the past two years.

Drownings on the rise

The Phoenix boat tragedy was a tremendous shock in terms of the number of casualties, but the impact of less sweeping incidents like drownings cannot be overlooked.

After studying water-related accidents off the coast of Phuket and the neighbouring provinces of Phangnga, Krabi, Trang and Satun, Pol Maj Gen Kritsak Songmunnak, chief of Tourist Police Bureau's subdivision 3, said drownings accounted for 36% of accidents, followed by unsafe boats.

He added that tourists themselves as well as slow rescue operations were to blame for most drowning cases, which usually occur during the monsoon season.

"Many tourists ignore the red warning flags on beaches," deputy Phuket governor Suphot Rotrueang said, referring to the ban on swimming when the waves are strong.

Also, some revellers go to swim after bars and night venues close at 2am, when there are no lifeguards at the beaches, he added.

These victims also rarely make it due to the "slow call for rescuers, slow rescue and slow admission to hospitals", said Chatchadaphon Kraisonphonsan, a maritime doctor at Vachira Phuket Hospital.

Dr Chatchadaphon admitted most accidents take place in areas where there are either no lifeguards or in "closed beaches" that are privately owned and lack the surveillance of local officials.

Hence she called on the caretakers of beaches such as Nai Thon and Freedom to improve their safety measures, especially by employing more lifeguards, who can provide immediate help.

Medical staff and health officials can also reinforce rescue operations, but they currently don't have rescue boats, she said.

The Thai Maritime Enforcement Command Centre, which oversees six Andaman-rimmed provinces, including Phuket, plans to invite all stakeholders to a seminar to work out ways to cut maritime accidents in a more sustainable manner.

The seminar is crucial because maritime accidents result from a range of risks from seaside activities to natural disasters and even climate change, 3rd Naval Area Command chief Vice Adm Choengchai Chomchoengphaet said.

"This is not only about tourists' confidence but also about the country's economy," he said.

Three accidents involving the Serenita yacht, a jet ski and Phoenix tour boat, occurred on July 5, 2018, but rescuers were only able to help tourists in the first two cases.

Mr Praphan said in the wake of these tragedies, officials are planning better safety measures but there is one hindrance -- the lack of rescue boats.

The proposal has been forwarded to the Office of the National Economic and Social Development Council but "we have yet to be granted the budget", Mr Praphan said.

After all, he said, tourists want to see more substantive efforts to deal with the problems, and expects more tourists to return to Phuket after this.

The number of tourists, mostly free independent travellers, has risen slightly by 5-10% from last year, he said. 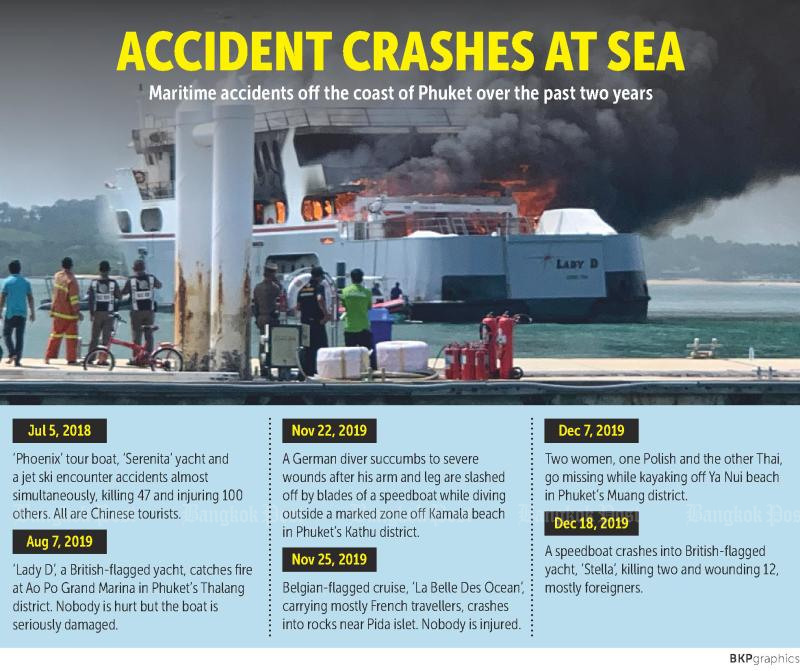