As govt flounders, locals band together to fight smog

DAILY GRIND: Residents brave the dust and fumes on a hazy morning in Chiang Mai. PM2.5 remained present in the air at unsafe levels in many parts of the North on Saturday.

As more and more people feel the adverse impact of PM2.5 dust particles, many complain the government has not done enough to solve the problem and are taking action to protect themselves and society.

The particles came from fires on sugar plantations. Farmers often set fire to their crops during the process of cane harvesting.

Yet some runners decided to bite the bullet and run anyway.

Among those was freelance writer Apiradee Treeratkuarkul who completed a marathon for the first time last Sunday.

"The haze and smoke from burning sugar farms blanketed the sky one day before the competition."

Despite this, Apiradee decided to run because she had been hard at work practising for a year for her first marathon.

She admitted it was not a healthy decision yet she badly wanted to compete.

"Running in bad weather is painstaking," she said.

"It is so difficult to breathe. Yet, I decided to move on just to complete it because I have worked so hard for it."

It took her much longer than she expected to reach the finish line.

In Chiang Mai, despite the province having brought its annual fire ban forward this year, PM2.5 concentration levels exceeded the safe threshold of 50µg/m³ of air set by the Pollution Control Department (PCD).

According to the PCD, PM2.5 levels in Chiang Mai were on average 75µg/m³ over the past week.

Chiang Mai governor Charoenrit Sanguansat said early burning combined with cold weather and ongoing high-pressure systems were contributing to smog being captured in the province, so the province decided to bring its annual fire ban, which usually begins in February, forward this year.

"All 25 districts of Chiang Mai are banned from open-air burning. Violators could face fines of up to 25,000 baht and three months in prison," he said.

Nalee Intaranan, a member of the council, said the group had a two-pronged approach to the issue.

The first is to get the government on board in terms of funding and changes in law and policy.

The second is to create a social movement to raise awareness and educate people about the impact of PM2.5 on their health.

She said the main focus of the group will be to reduce smoke from all sources, from vehicles, factories, construction, garden burning to agricultural and forest fires.

It is estimated that between 80% to 90% of fires in the north are from the latter two causes, which differs from Bangkok and the central region.

"While air pollution is becoming a national-level emergency, each region has its own set of problems and solutions which must be looked at separately," she said.

Ms Nalee said the council will work full-time all year, unlike regional government efforts in the past which would only focus on the problem for a few months per year.

She said if the effort is only put in during the crisis, it is doomed to fail because there is not enough manpower and resources to combat the scale of burning.

"In the long run, we want to transform Chiang Mai into a green city and the bicycle capital of Thailand," she said.

Since it was founded in September last year, the Breathe Council has held several events such as bicycle parades, charity concerts, art exhibitions and panel discussions to promote clean air for Chiang Mai.

Meanwhile in Nonthaburi, the Central Preventorium for Children building in Nonthaburi province, which is used as a child care centre, has been selected by the Department of Health and the Ministry of Public Health as a pilot area to protect young children at school from PM 2.5 exposure.

Under close cooperation with the environmental engineering team from King Mongkut's University of Technology Thonburi (KMUTT), the engineering team has designed a safety zone for young children when the air outdoors is dangerous for their health.

The 30 square metre room is known as a "pressurised room".

Jaturong Cheewaparaboon from KMUTT's Faculty of Engineering who is in charge of the project, said sealing the room is not suitable because, despite shielding childen from PM2.5, it would increase the level of carbon dioxide.

The team designed a "pressurised room" which allows outside air to flow into the room.

Two domestic-made filters are used in the machine which pumps outside air into the room.

The air flowing into the room is filtered and safe.

The machine is also set up to let a proper amount of air to come into the room. 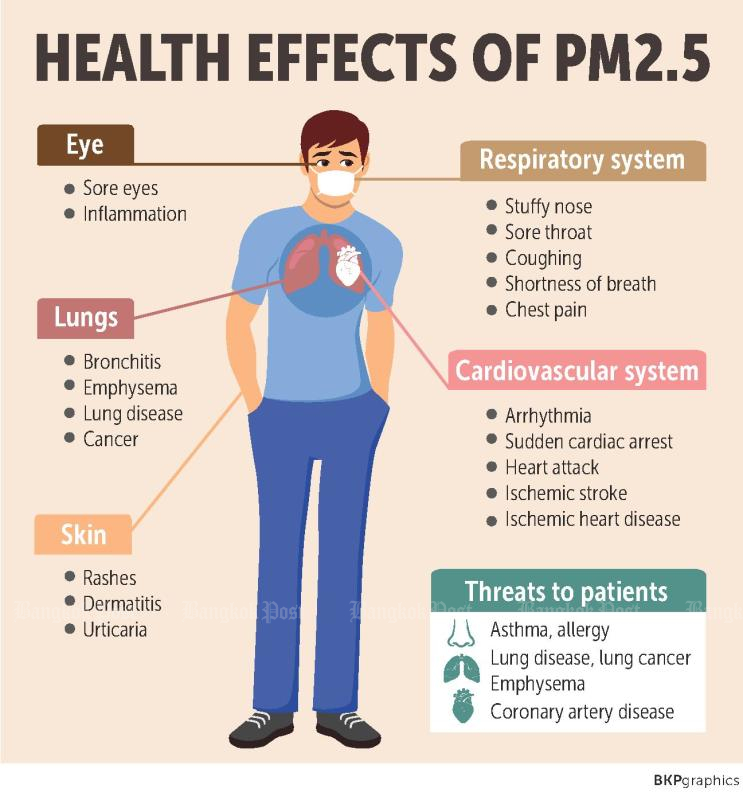 "We have set up the standard to make sure the room is safe from PM2.5 and we are satisfied that the system could control a level between 25 to 45µg/m³ when the outdoor air quality is very high with toxic micro particles," he said.

He said the project has put a focus on long-term use and to make the concept easy to maintain with no complicated technology.

She said young children are not allowed to participate in outdoor activities if the air outside is unhealthy. 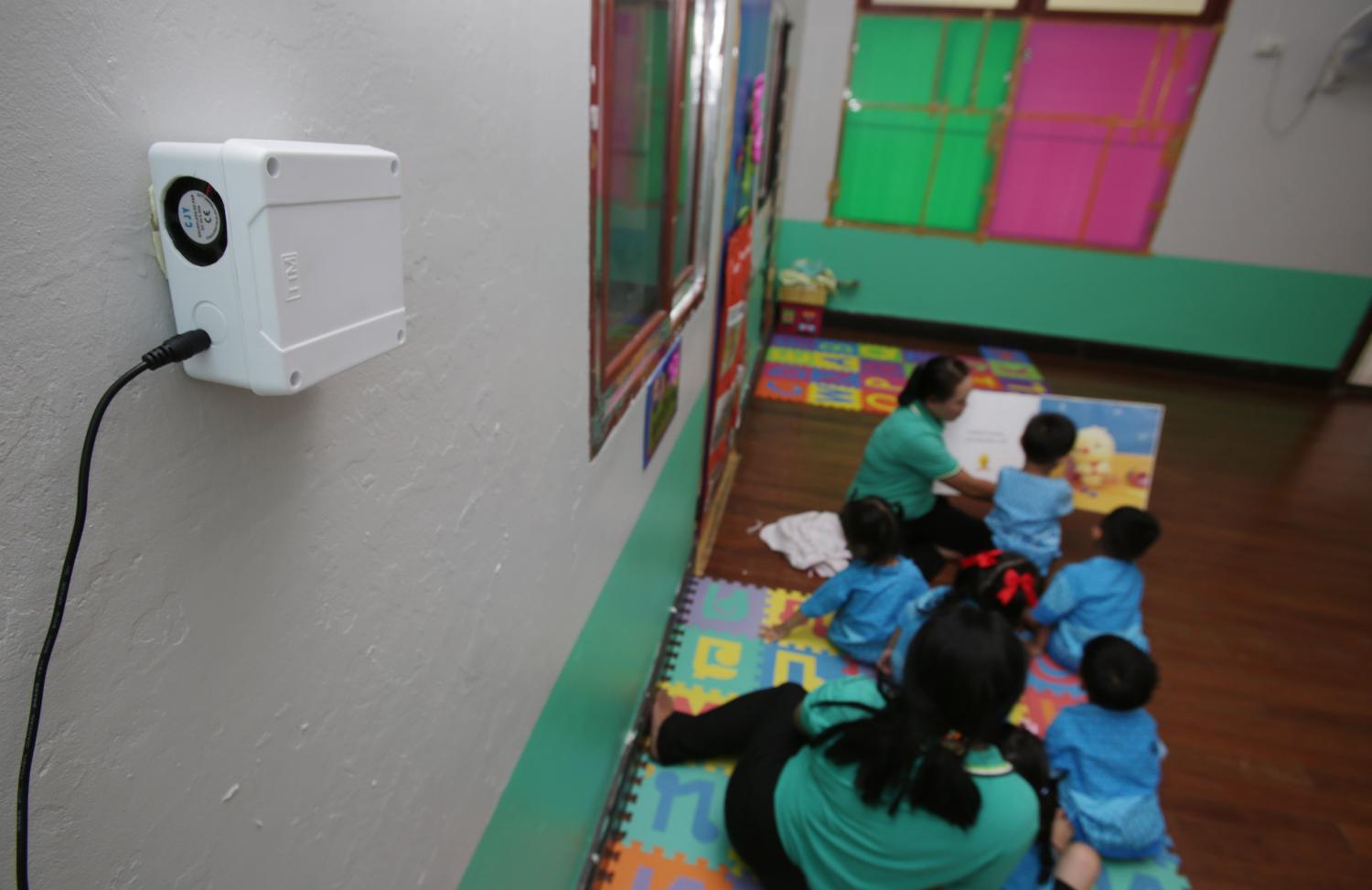 BREATHING EASY: A play room at the National Institute of Child Health is equipped with a device, left, which provides readings of the dust level in the area. The meter works in sync with an air filter machine fitted in the room.

She added that equipping their children with masks is the basic instruction given to parents who send their children to the nursery, adding that information on the daily air quality is also given on a board in front of the nursery.

According to the World Health Organisation (WHO), 570,000 children under the age of five die from unclean air each year due to immature lung development systems caused by inhaling large volumes of toxic air.

It is estimated that about 2.6 million Thai children live in places with a high risk of air pollution. 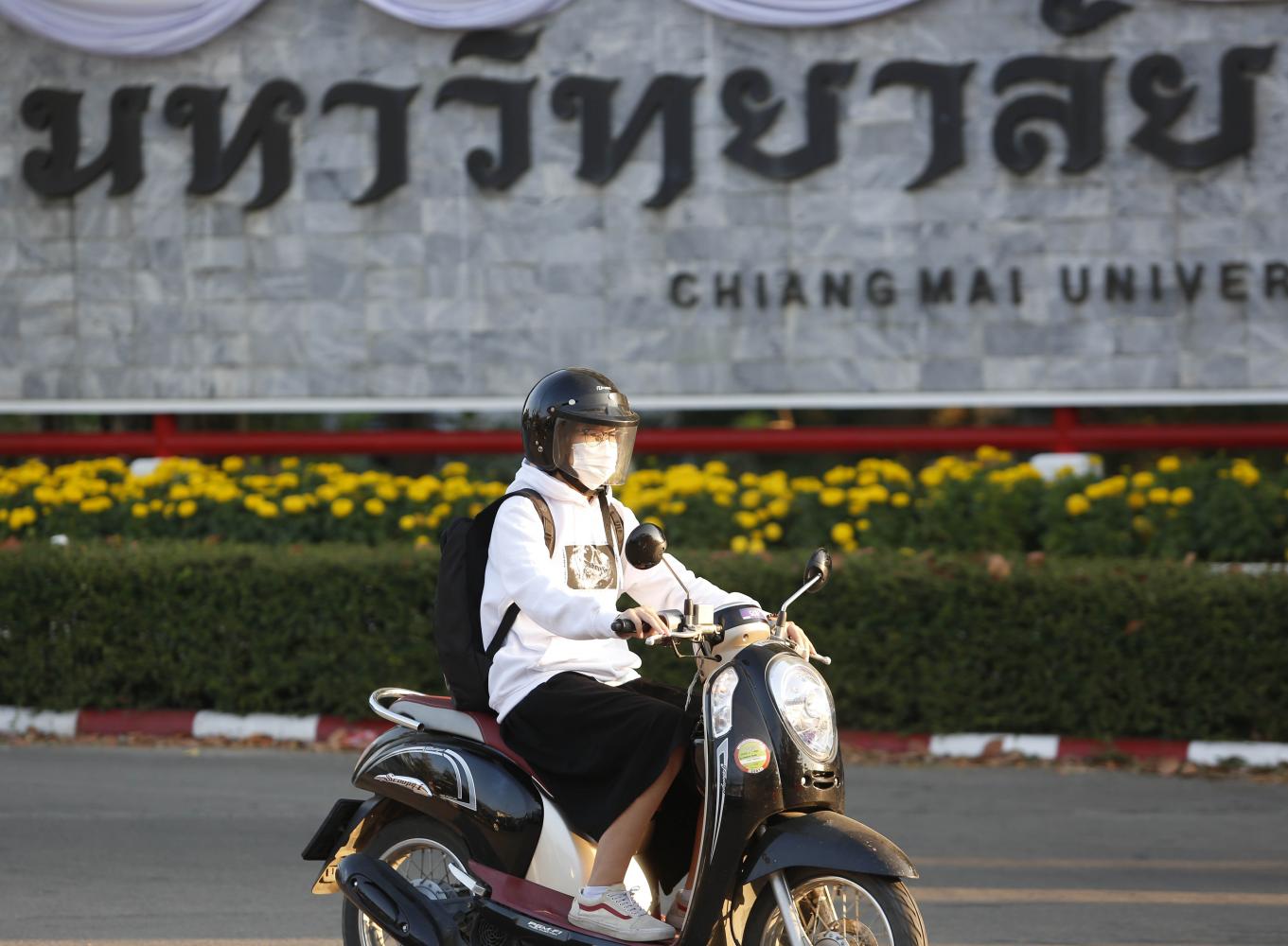 USING PROTECTION: A student rides wearing a face mask to protect herself against the fine dust.

Guidelines are set up to reduce exposure to polluted air, including a suggestion to prepare a clean air shelter in case of need.

In the north, there are 1,616 smog safety rooms being prepared for encountering the unhealthy air situation.

Panpimol Wipulakorn, chief of the Department of Health, said it is important to avoid any contact with unclean air, especially young children whose immune systems have not yet developed.