The true cost of convenience

A food delivery man drives to pick up food after receiving an order via an app. He heads to a popular fried pork shop in the Klong Toey area where he places the food order before delivering it to his customer. (Photos by Somchai Poomlard)

The relatively high income of online food delivery riders comes at a cost, with drivers complaining of heavy workload, long hours and the strain of having to deal with customer complaints. 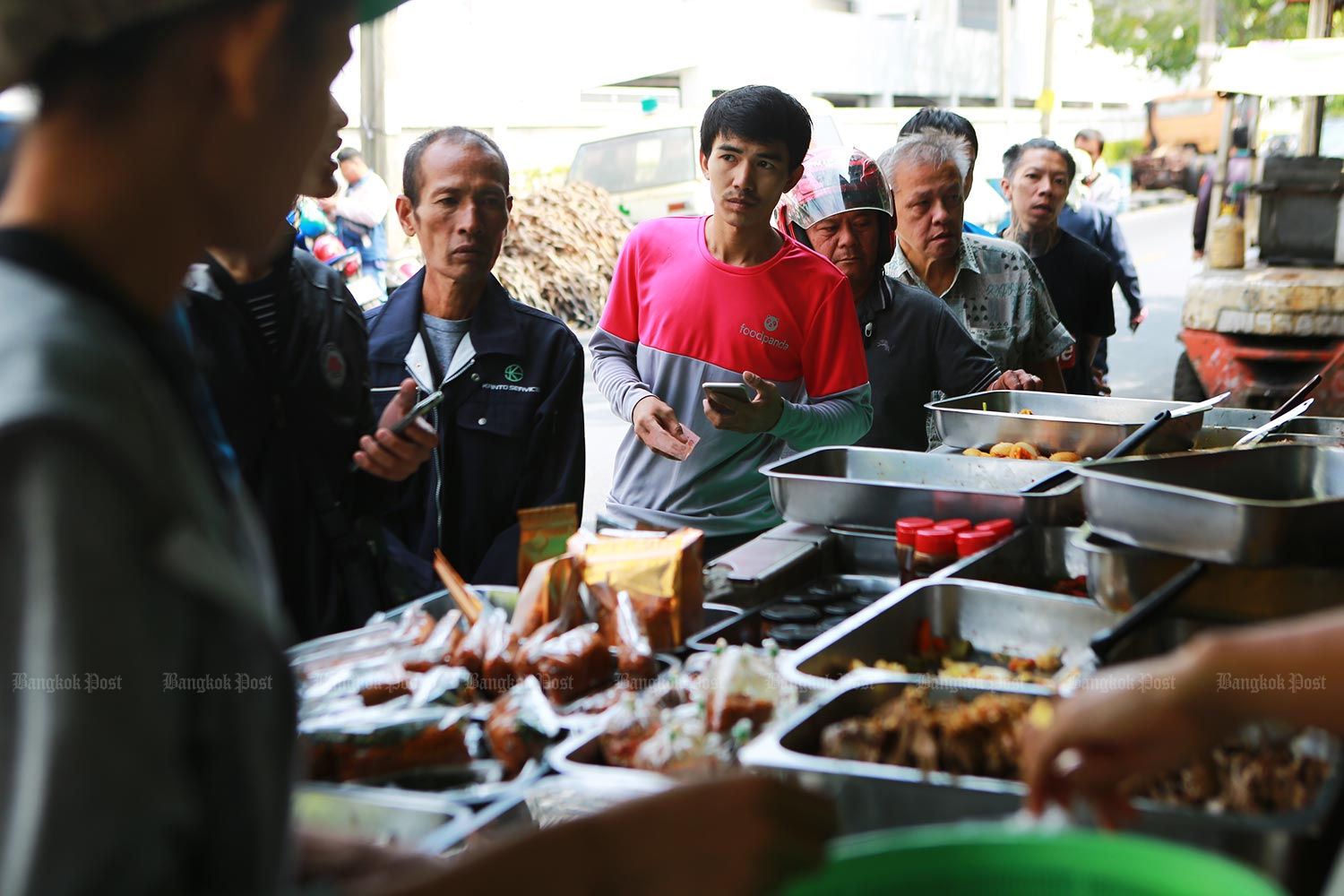 These were only a few among many complaints made by food delivery riders interviewed by the Bangkok Post, after GrabFood riders held a protest in Phuket last week.

The riders claimed that they were given too small a cut by the company behind the food delivery service, with some protesters claiming to be paid as low as 30 baht per delivery.

While other providers pay their riders more, the protesters said their take-home pay ultimately isn't much, as some of the money they earn from each delivery gets spent on food and drinks as they wait -- sometimes for hours -- near popular restaurants and vendors for an order to come through.

At present, key players in the sector include Line, GrabTaxi, Foodpanda and Gojek.

Each of these companies makes money by paying a fee to motorcycle taxi drivers and other riders to serve as the missing link between customers -- those who want to eat but simply can't or won't leave their homes -- and restaurants and/or food stalls in their area.

These groups are matched in smartphone applications in which consumers can place orders at their chosen eateries without having to go anywhere. Generally, these apps will notify customers when a rider has agreed to pick-up the food for delivery to the address listed on the order.

Through the apps, customers can also track the progress of their orders.

While these apps are convenient for customers waiting at home, this convenience comes at a cost for the riders, who often have to deal with "unkind" conditions to deliver the orders on time.

A rider who asked not to be named said each food delivery service provider applies a points-based performance appraisal system which accords extra points to drivers who promptly accept and deliver customers' orders. These points are supposed to be reflective of a driver's performance.

Customers are sometimes charged a delivery fee, which differs from one app to another, and/or pay higher prices compared to walk-in customers.

Companies like GrabTaxi and Foodpanda make their profit from the price difference, while their riders are paid from the money the companies make from delivery charges paid by customers. 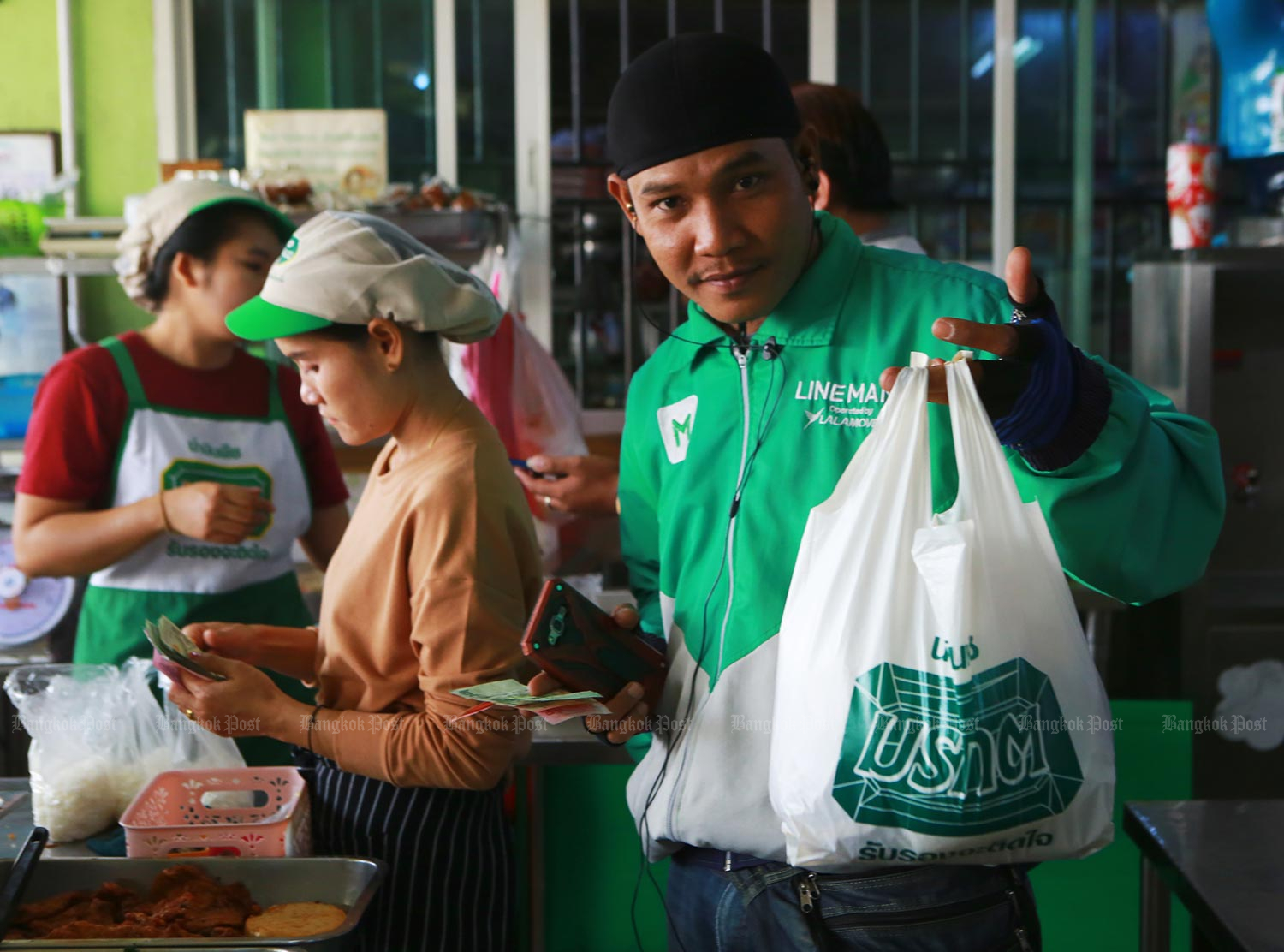 A delivery man shows a bag of food ordered via the app before placing it on the back of his motorcycle and heading off to his customer. 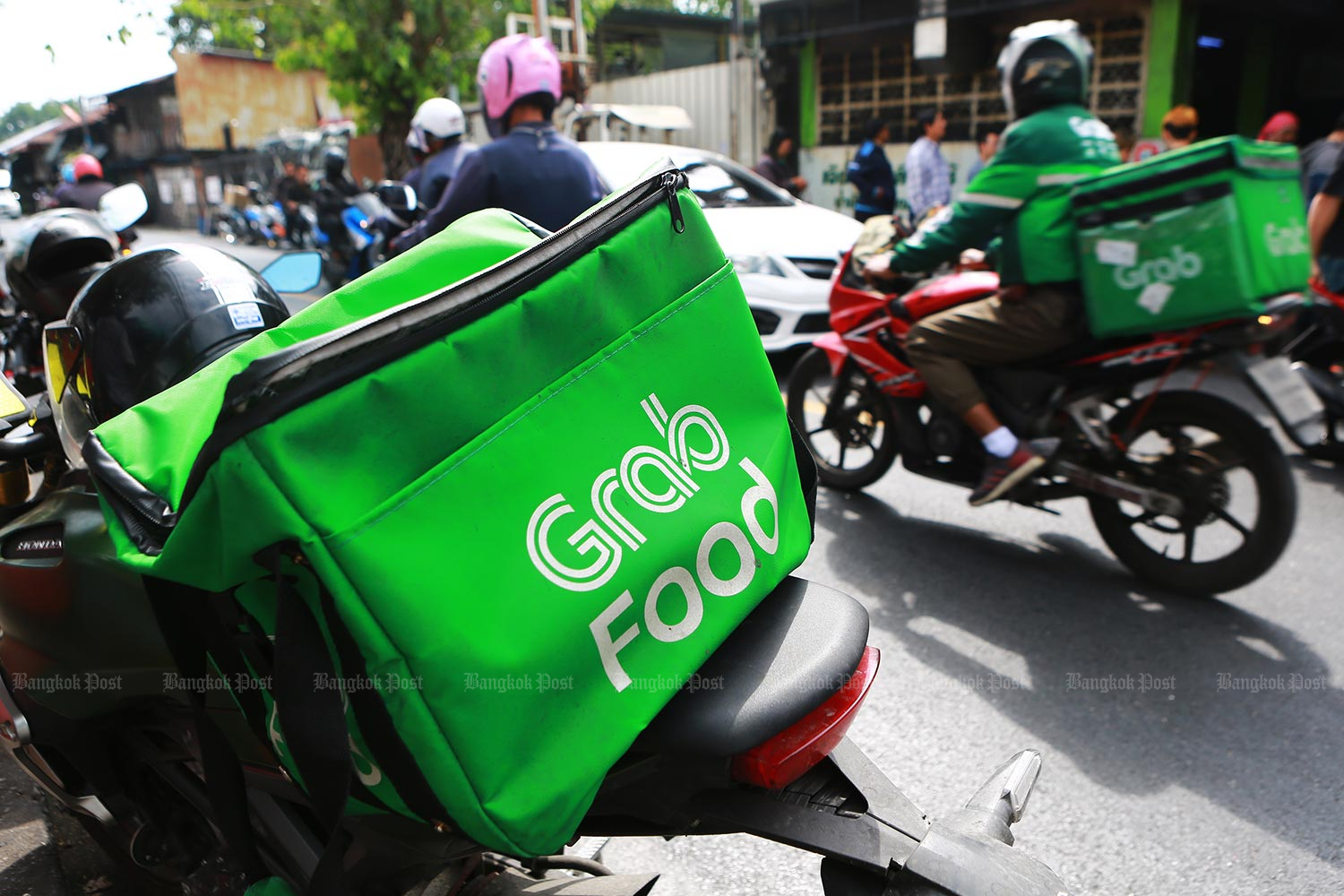 The rider said that his take-home pay depends on the kind of orders he gets. Some days, he has to wait for hours for a single order at a busy restaurant.

"I could have delivered two or three orders from other restaurants in that time," he said.

The day's problems usually begin during "peak hours" between 10am to 2pm on weekdays, as food delivery apps are usually flooded with lunch orders from office workers.

"Because of the demerit system, no one would dare to reject an order even if it is inconvenient," he said, explaining that a rider that declines orders too often can be barred from logging on to the app.

"It's extremely exhausting, but sometimes we don't have a choice."

The rider went on to say that he has been working 16-18 hours each day since New Year's Day. In that period, the rider said, he brought home an average of 16,000 baht a week.

He said that while his previous job didn't pay as well, at least he could spend the weekend with his children.

Customer dissatisfaction can also hit the riders' pockets. When a customer waits too long for their food, they can simply cancel their order on the app.

"In these cases, we sometimes have to pick up the tabs ourselves," he said."This is because riders have to pay for the food orders with their own money and have it 'reimbursed' by the customers."

Another rider, who calls himself "O", concurred and added another common complaint.

"We often get scolded by angry customers," he said.

Female riders face added risks -- one driver complained on Facebook, saying she rode 17 kilometres to deliver an order at 1am, only to have the delivery address changed to a location that required her to go further down a deserted, dusty road.

When she arrived and asked the customer to come out and receive the order, she received no reply.

Aye became a food delivery rider because of the high pay it promised. At first, he earned 100 baht per delivery. However, these days he gets about 40 baht for deliveries within a 5km radius. Now, he earns about 1,200 baht a day -- just enough to support his wife and seven-year-old daughter.

He said that about 100,000 people are employed as food delivery riders.

"Anyone with a smartphone, a motorcycle and a bit of cash can get work straight away," he said. "However, these companies don't cover vehicle maintenance, nor do they provide insurance in case of accidents."

Mr Aye called on the government to make it mandatory for these companies to provide some welfare benefits for their riders, or at least, arrange for insurance coverage for them.

Tossapon Tassanakunlapan, a law researcher at Chiang Mai University, said companies behind food delivery apps control a vast amount of data about consumer behaviour, which can be sold to business analysts.

"Riders play a crucial part in collecting this data and they deserve to receive a share of the income from any sale of the information," he said.

Aphantri Charoensak, a former labour union leader in the food industry, said the riders' line of work exposes them to constant danger from road accidents. "They are not eligible for compensation from the state because they are not technically company employees," he said.

Kriangsak Teerakowitkajorn, a researcher with the Just Economy and Labour Institute, concurred with Mr Aphantri. "These food delivery workers have no negotiating power at all when it comes to labour rights," he said.

Citing his research titled "New Forms of Platform Mediated Work for On-Demand Food Delivery", Mr Kriangsak said the industry's value will grow to between 33 and 35 billion baht this year, with growth expected to be around 10% per year.