At Kanchanaburi's Moo Baan Dek school, 'unwanted' children are given security and freedom

Children at the school spend a lot of time outside of class, in the arms of nature and are taught skills that will help them lead an independent life later on. (Photos by the Foundation for Children)

Since Chin was a young boy, his world has revolved around Moo Baan Dek, where he was fed, clothed, schooled -- and loved. 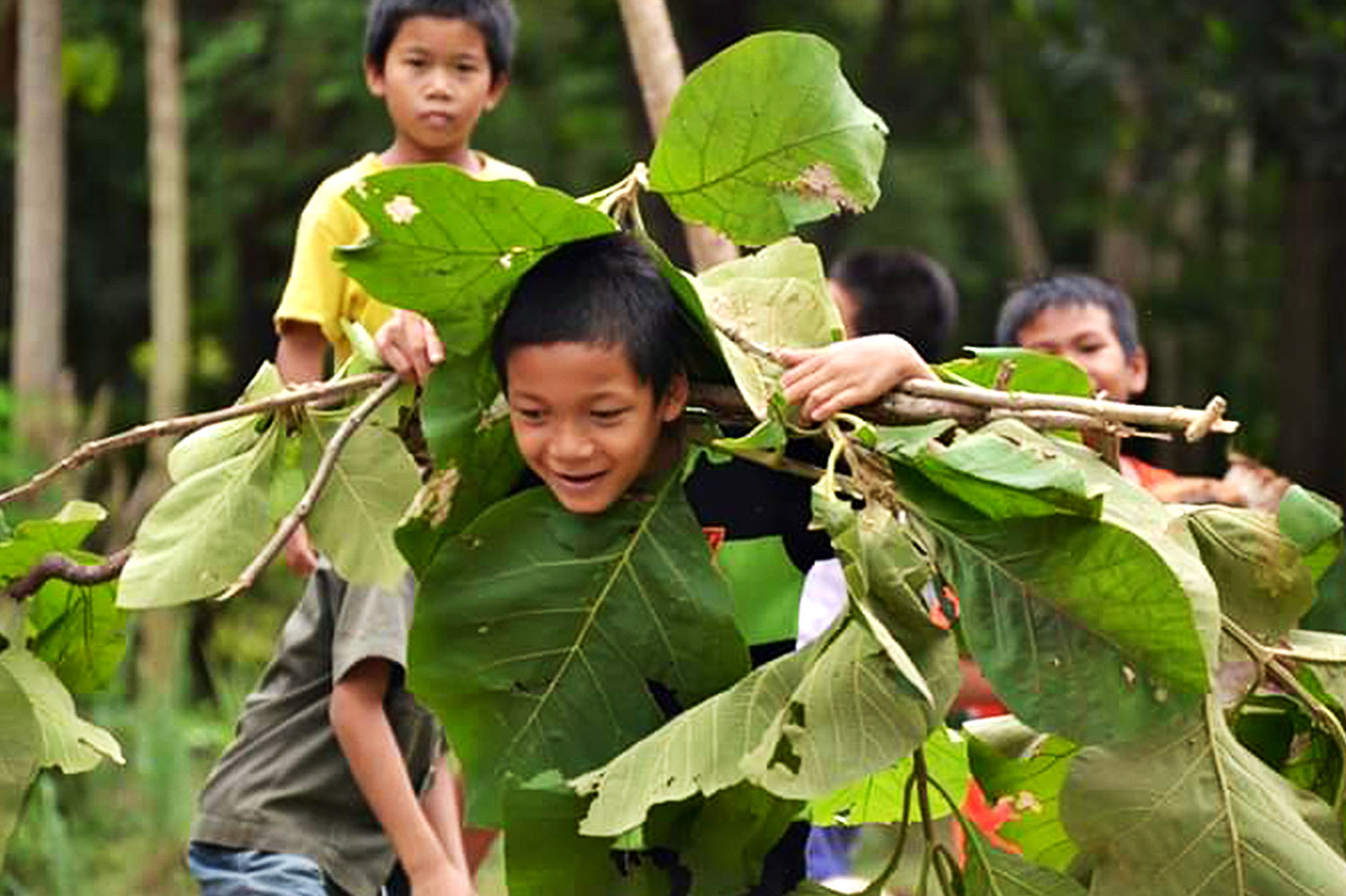 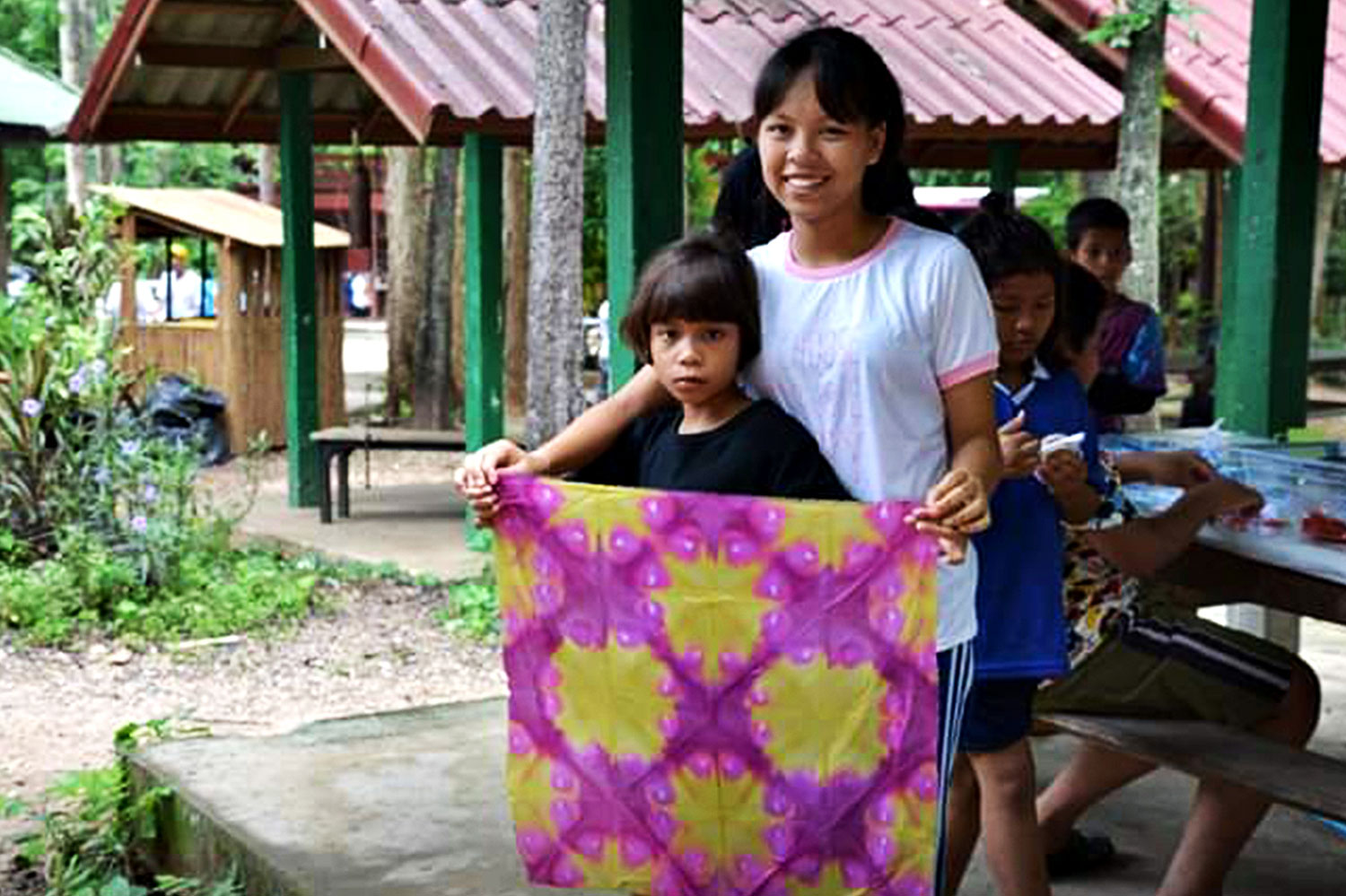 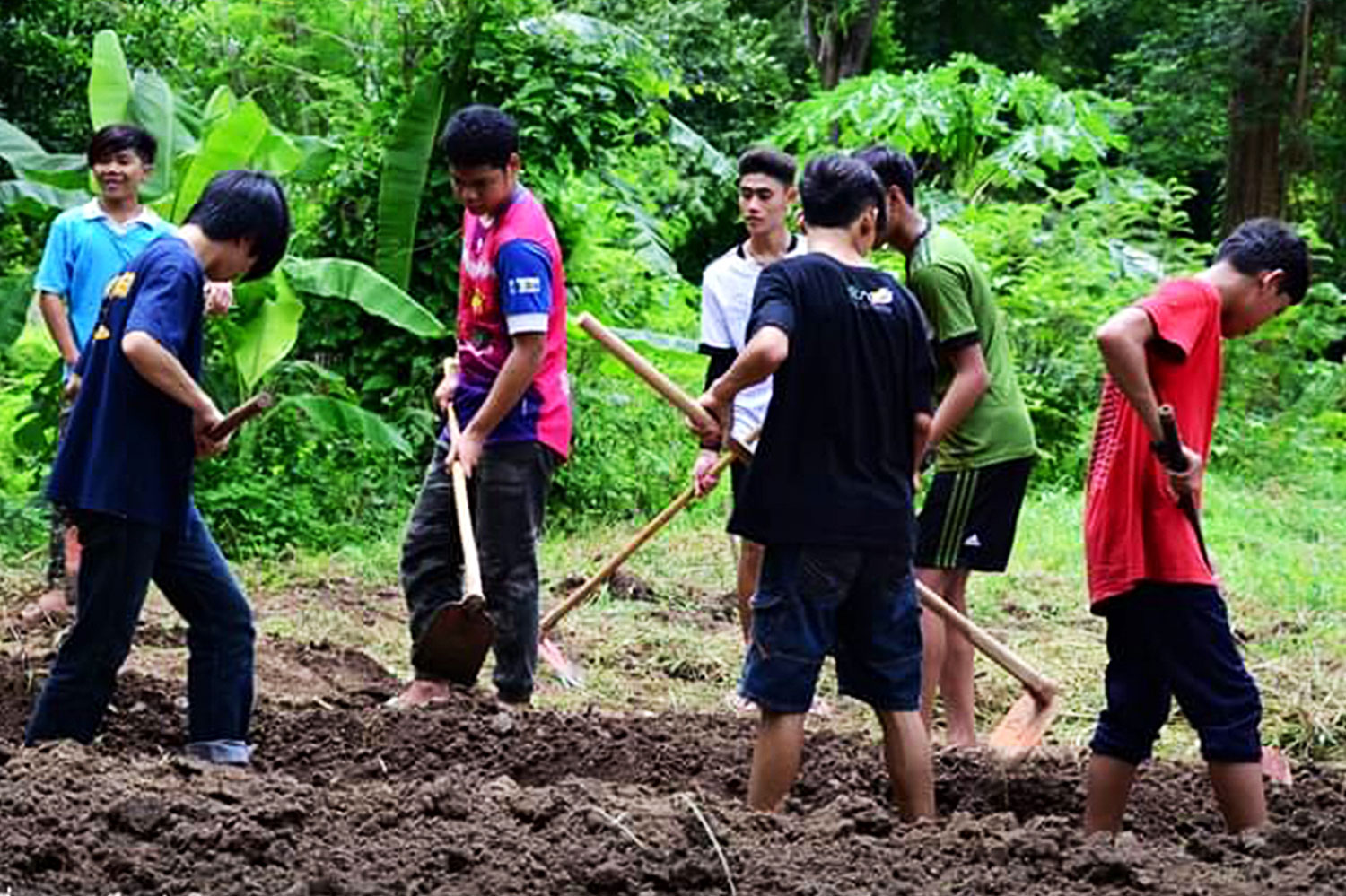 At 19, he still makes time to visit the charity-funded primary school in Kanchanaburi where he grew up.

"I miss everyone here, I still want a hug from Mae [mother] Aew," he said, referring to Ratchanee Dhongchai, the school's headmistress.

Chin -- now a freelance photographer -- both attended and lived in the school, along with numerous other children who over the years, came to call Ms Ratchanee their "mum".

In fact, Ms Ratchanee, 70, has been a mother to many children across multiple generations in her time as headmistress of the school.

Her school has taken in orphaned and "unwanted" children since it opened its doors in 1979. Here, the children are not just clothed and fed -- they are given their own living quarters on school grounds.

Chin said his biological mother left him in the care of the school when he was just a boy.

"My mother was going through a very rough patch and she ended up getting jailed on drug charges," he said. "Now she works as a seamstress and has a new family to look after."

However, Chin was lucky as he didn't have to grow up without a mother figure -- he had Ms Ratchanee who stepped in to fill in the void.

"Here, the children are loved and nurtured by Mae Aew. She cared for us so much that we forgot our biological mothers," he said.

For 40 years, Moo Baan Dek has provided shelter and education to countless children from impoverished areas in Kanchanaburi and beyond.

The school, which was founded in 1979, was originally located on the banks of the Kwae Noi River, in tambon Tha Sao, Sai Yok district. 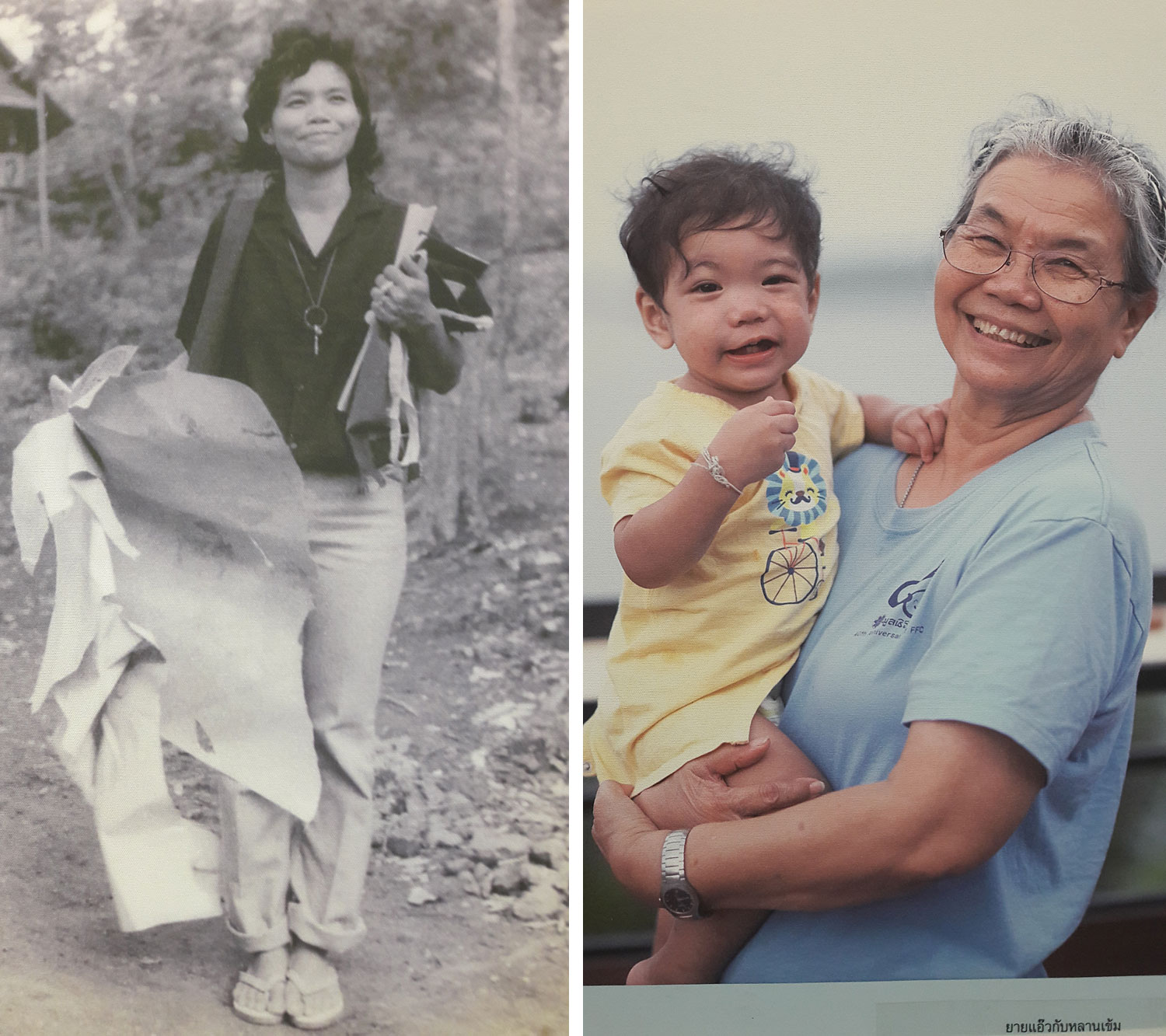 Left photo: An old photo shows Ratchanee Dhongchai, headmistress of Moo Baan Dek School in Kanchanaburi, on her way to help out needy children; Ms Ratchanee holds a toddler in her arms at the school with signs at its entrance; the lower sign gives the school’s name and the one above, the Foundation for Children which funds the school. 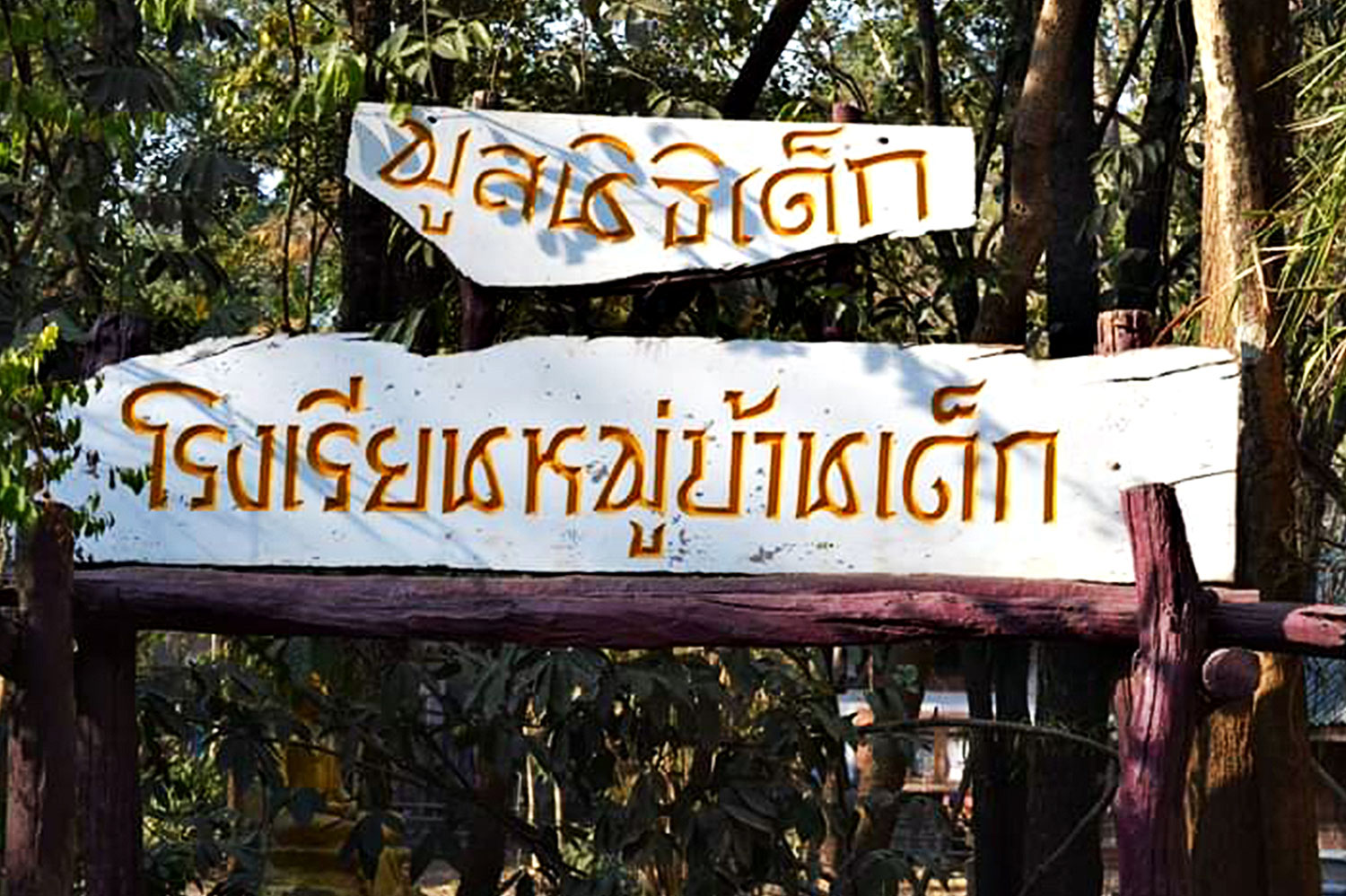 On April 1, 1980, the school moved to a new location along the Kwae Yai River, on a 200-rai land plot donated by Jinda Imjamriang Phangkanont Foundation and the Foundation for Children.

Children at Moo Baan Dek -- many of whom had experienced trauma at the hands of their own parents and/or close relatives -- are provided with full board, which is covered by the Foundation for Children.

The foundation's chairman, renowned social thinker Prawase Wasi, is listed as the school's owner. Ms Ratchanee's husband, adviser to the Campaign for Popular Democracy Pibhob Dhongchai, is the school's co-founder.

Moo Baan Dek is certified by the Education Ministry to accept primary school students from Prathom Suksa (grade) 1 to 6.

Upon completing Grade 6, the children are encouraged to continue their education through informal tracks which would make them eligible to apply for university placements.

At present, the school employs 24 full-time staff members, in addition to two kindergarten and six primary school teachers, while volunteers organise and run extracurricular activities for the children.

Headmistress Ratchanee said she has watched many of the school's alumni grow up to build a secure and bright future for themselves. The "pioneering" batch, she said, are now in their 40s.

"I'm overwhelmed with delight to see the children mature into responsible adults capable of raising their own families, which they never really had [as children]," she said.

Ms Ratchanee said the school doubles as a vocational training centre, where local artisans teach the younger children basic pottery-making, batik drawing, dressmaking, and weaving. These lessons were organised to teach occupational skills to the children and inspire them to work hard to achieve their goals.

The school was founded on the philosophy of freedom espoused at Summerhill School, as set out by Scottish author and education Alexander Sutherland Neill (1883-1973).

He believes that children are innately free of corruptible tendencies and, as such, will naturally grow up to be virtuous if they are allowed to grow up without subjective values imposed upon them by adults. To prove his point, he founded Summerhill, an experimental school in Suffolk in the United Kingdom in 1927.

What set Summerhill apart from other schools was its emphasis on freedom and self-government for children as well as its staff, as envisaged by Neill, who advocated creativity over achieving academic goals which he sees as piling pressure on young minds.

The atmosphere and the educational curriculum in Moo Baan Dek are designed with the children's varied backgrounds in mind. Learning is not confined to the typical classroom; it can take place in any corner of the school -- 70% of which is covered with lush greenery.

Ms Ratchanee said many children with troubled past may exhibit problematic behaviour, but their conduct can be reformed by encouraging them to reflect and look for their inner creative streak.

"Focusing in their creative side can help them 'negate' the traumatic events they experienced as little children," she said.

"Their smiling faces lift me up -- they keep me going everyday."

But this approach wasn't always well-received by local residents, especially in the first few years of its existence. Its unconventional approach to education proved to be quite unnerving to those who are used to normal curricula at mainstream schools.

But over the years, people have become more accepting of the school's different approach.

Mr Pibhob said the children from an abusive or broken family can be "cured" of their emotional wounds through unconditional, tender and loving care.

He said bad behaviour isn't hereditary and there is no such thing as "bad blood" -- they are instead nurtured by the children's surroundings during their formative years.

"When the children first arrive at Moo Baan Dek, we made it clear that they are free to express any pent-up emotions and/or feelings," he said.

"The first step of letting go of pain, is by acknowledging its existence."

Moo Baan Dek is collaborating with Mahidol University in researching a psychological remedy to help youngsters who had an unfortunate start in life.