Renewed push to make a success of pedal power

'Bangkok Green Link' promises to finally get capital dwellers on their bikes.

Green dream: The Bangkok Green Link aims to develop unused public land, such as vacant space under expressways and alongside railway lines, to create bicycle routes and civic space.

The popularity of cycling is on the wane in Bangkok. Bicycle shops and related businesses which were thriving only a few years ago are struggling to stay afloat as the number of riders on city streets has dwindled, leaving only the die-hard enthusiasts brave enough to tackle the traffic and filthy air.

Nevertheless, town planners and architects continue to design bicycle routes in the capital in the hope of encouraging more people to abandon their cars.

The latest such project is the "Bangkok Green Link", the brainchild of Shma Co., Ltd. a city architectural firm.

Shma Co., Ltd. is known for developing public spaces in the city such as parks, areas under the expressway and old communities which have become run-down.

In 2016, the firm designed a 1-kilometre bicycle route running from Chatuchak in the north of the city down to the Chao Phraya River.

Yossapon Boonsom, director of Shma Co., Ltd. told the Bangkok Post that its latest bicycle route is far more ambitious and will also be better integrated with other forms of city transport.

The plan envisions a main 28km loop with 26km of linking lanes branching out from it.

Given the scarcity of development land in the capital, the firm wants to continue its theme of making use of the space under expressways or along existing railway lines. 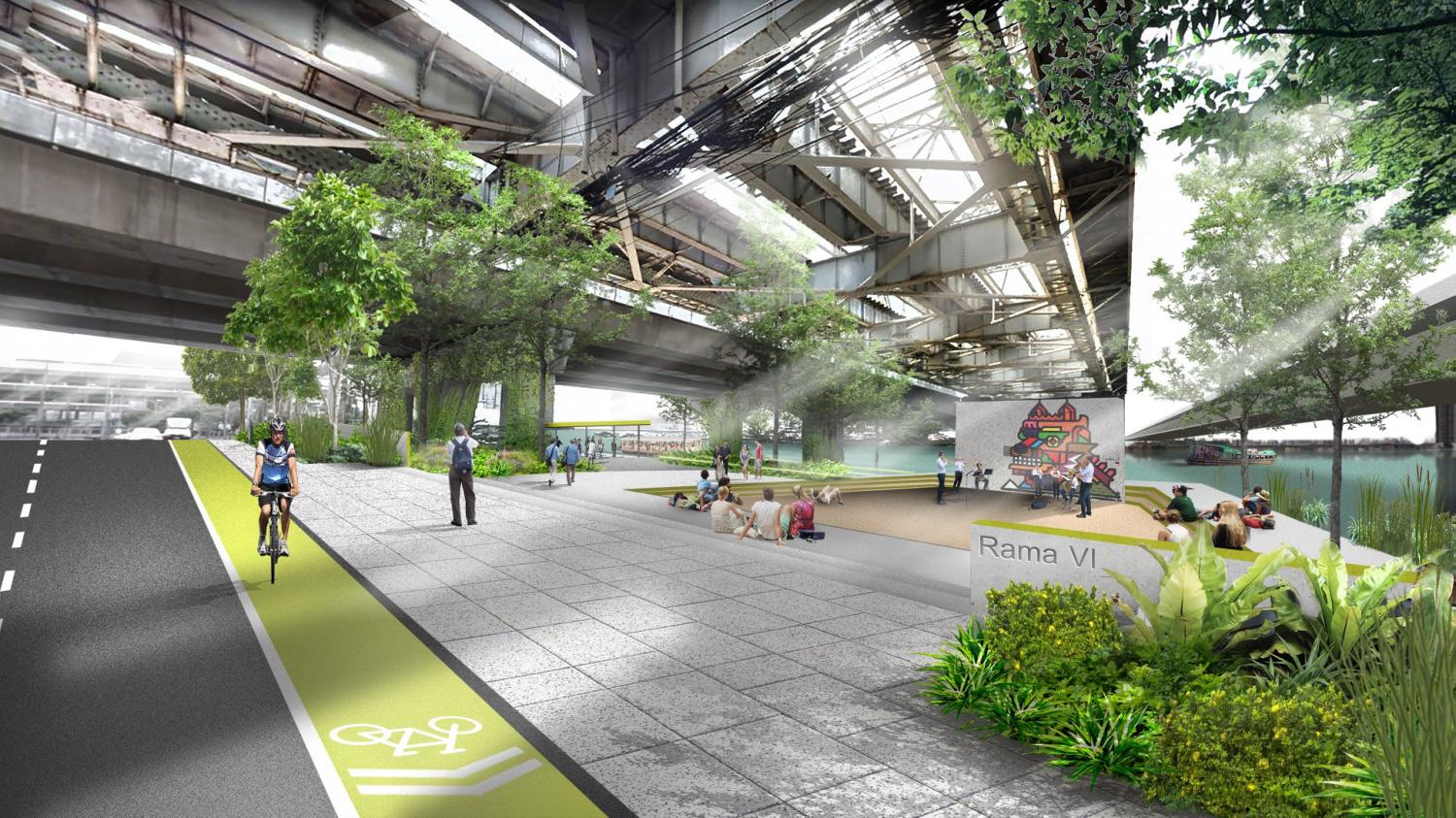 In addition to the bicycle route itself, there are also plans to build a network of connected facilities which will include a small public park, rest areas, street lighting, CCTV coverage and, of course, bicycle parking spots. The route will also offer convenient access to major mass transit systems such as the skytrain, subway system and city buses.

"It is not the first time that people, town planners and architects have talked about developing the public land under the expressway. But there has been very little coordination, leaving many state land plots unused and which locals avoid due to the prevalence of criminal activity there," Mr Yossapon said.

Mr Yossapon said the firm is preparing to send its plan to the Bangkok Metropolitan Administration (BMA).

"The idea is to develop public space that people can really use. The project will not only serve transport needs but will also provide public space for people to come to relax and hopefully become a mechanism to reduce energy consumption, tackle pollution and improve quality of life for people in Bangkok."

The Chatuchak and Bang Sue areas have been targeted because both are set to become part of a new transport hub, while the canal bank in Pratunam, Chulalongkorn University and Sam Yan area, and Yothi area on Rama VI Road will be developed to become a medical hub. Charoen Krung has also been chosen because of its proximity to the Chao Phraya River, according to Mr Yossapon.

The main loop will start from Sri Rat Expressway along Rama VI Road (Khlong Bang Sue to Khlong Prapa) and spiral round to the Uruphong area. Then there will be a section starting from the old railway near Chua Phloeng Road between Rama III and Rama IV roads to Vibhavadi Rangsit Road in Din Daeng.

Eight sub-linking bicycle lanes in community areas will connect to the main loop.

Mr Yossapon said the 54km project will be dotted with 10,800 trees that can annually absorb approximately 1,620 tonnes of carbon emissions and remove 3,580 tonnes of the hazardous PM2.5 particle dust. 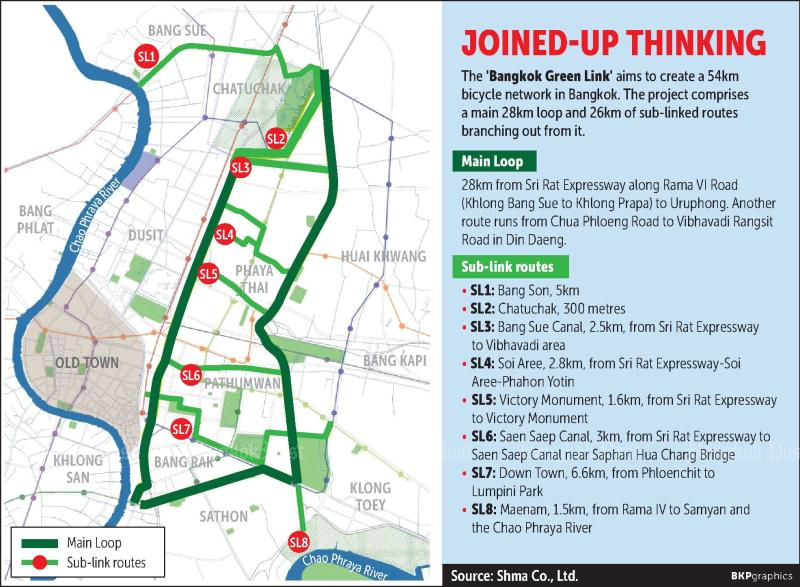 Although the Bangkok Green Link project has gained public attention, Thongchai Panswad, president of the Thailand Cycling Club, said its success will depend on how many people can be persuaded to use it.

Prof Thongchai, a renowned environmental engineer at Chulalongkorn University, said that most bicycle lane projects in Bangkok fail either at the planning stage due to public opposition or after subsequent disuse once operational.

A good example of this is the route in Bang Lamphu which was cancelled after community residents and vendors resisted.

"They resisted the bicycle lane project because it would have affected their way of life," said Prof Thongchai, adding that it would have prevented vehicles using the lane thereby hampering the goods deliveries of local businesses.

Successful bicycle lanes are those which cause minimal disruption and afford local people easier access to staple destinations such as markets and schools, he said.

Alongside infrastructure development, authorities and civic groups must invest time in educating local people about the benefits of switching from cars and motorbikes to greener, and also cheaper and healthier, bicycle use.

"The most important thing is that the government must give a high priority to bicycle use and take a leading role in realising this policy," he said, adding the government has generally given a higher priority to building new roads and expanding the skytrain and subway systems.

Though he acknowledged the benefits of a focus on improving the train network, Prof Thongchai believes cycle routes can form an ideal feeder system to help commuters get to and from mass transit stations.

Despite having so far struggled to convince people to switch to pedal power en masse, deputy Bangkok governor Sakoltee Phattiyakul insists the BMA will keep on trying.

The Traffic and Transportation Department under the BMA is surveying another four new routes, most located along major canals.

The first is a Rattanakosin route including bicycle lane along Phadung Krung Kasem Canal-Thewes area to Hua Lamphong station; the second is a San Saep Canal route; the third will be along Prem Prachakorn Canal and the fourth involves redeveloping an existing bicycle lane in Vacharapol and Ekamai area.