The Narcotics Control Board revealed most recent seizures of ecstasy pills from last October originated from major drug syndicates in the Netherlands, indicating attempts to broaden markets in more provinces across Thailand. (Bangkok Post file photo) 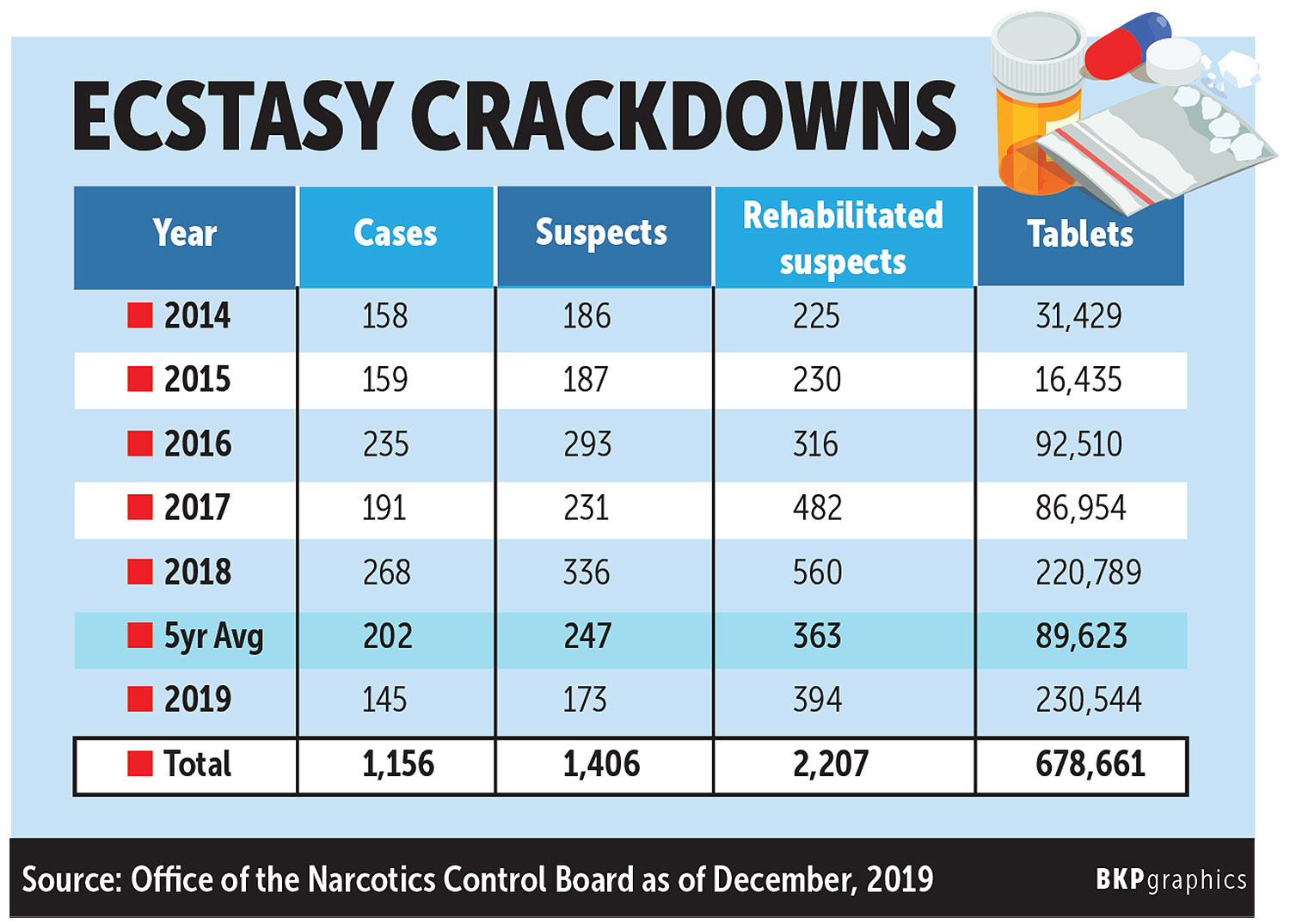 The Narcotics Control Board (ONCB) revealed most recent seizures of ecstasy pills from last October originated from major drug syndicates in the Netherlands, indicating attempts to broaden markets in more provinces across Thailand.

ONCB secretary-general Niyom Termsrisuk said that since October, the Airport Interdiction Task Force (AITF) has seized a total of 105,382 ecstasy pills, delivered from European countries, in 15 cases, and has 20 suspects -- 15 Thais and five foreigners.

A total of 15 seizures in the past six months concerned drugs sent from Germany, three from Portugal, two from France, and three from the Netherlands, Belgium and Slovenia, he said.

In the latest seizures on March 9 and 10, the AITF found 4,835 pills sent from Germany and implicated 11 Thais and foreigners in the Central Plains area, the North and the South. Most of the drugs originated from major drug syndicates in the Netherlands, with the drugs sent in parcels to the country.

Last year authorities seized 230,544 ecstasy pills, known as "ya E", which was the largest number in the past five years.

In contrast, authorities closed only 145 cases involving 173 suspects, which was the lowest number of the past five years, he said.

Despite the authorities confiscating more items, the number of arrests and cases is lower.

This is because many drug smugglers have changed their methods to deliver narcotic drugs via international courier services, he said.

"High demand for ecstasy among clubbers in large cities is a key factor in the large volume of the drug being smuggled into the country from Europe," Narcotics Suppression Bureau (NSB) chief Chinnaphat Sarasin said.

Another important factor was a strong growth in the postal service sector that was being abused by drug smugglers to distribute their illicit products, he said.

"The motive behind this exponential rise in ecstasy smuggling activities is a huge margin in the trade of this drug, which is several times higher than that of methamphetamine," he said.

Aside from ecstasy use at night clubs, small ecstasy "raves" in apartments, especially rental ones, were also found to be popular among rich teenagers, he said.

The drug gang attempted to distribute the drugs to more provinces, to broaden its market in the major tourism provinces such as Phuket, Surat Thani, Bangkok, Pattaya City and Chon Buri, he said.

Jeremy Douglas, regional representative of the United Nations Office on Drugs and Crime (UNODC), said: "The amount of ecstasy seized in Southeast Asia in 2018 was only 2.8 million tablets, and while 2019 figures are still settling we can confirm the number will be similar -- not much change year-to-year.

"Frankly, the number of ecstasy tablets seized in Thailand and the region is much much smaller than ya ba (methamphetamine), simply because it is expensive and used by a exclusive niche of society.

"Ecstasy remains a drug of the elite, the night club scene. We've seen it in the Thai and Southeast Asia market for years, but at modest levels because it is expensive for users."

Pol Lt Gen Chinnaphat agreed, although he still sees the growing number as a problem.

"Because of the higher prices, ecstasy remains popular mainly with well-to-do clubgoers, which explains why ecstasy is commonly found in crackdowns at nightclubs involving suspects who are foreigners," Pol Lt Gen Chinnaphat said.

The illegal recreational drug was commonly used together with alcoholic beverages, especially beer, he said.

"Part of the problem is that what is sold as ecstasy on the streets or in clubs in Thailand and Southeast Asia is sometimes different -- sometimes meth mixed with ketamine, or meth and other drugs in dangerous combinations," UNODC representative, Mr Douglas, told the Bangkok Post.

According to Mr Niyom, narcotic drugs on the global market can come in different forms, with different kinds of synthetic drugs used in combinations to produce pills.

These formulas will affect the user's awareness of surrounding objects and conditions in different ways, and makes it popular among night clubgoers.

Moreover, the cost of ecstasy pills is falling, as the maximum price has dropped from 1,500 baht to 800 baht, he said.

And because ecstasy also boosts libido, sexually transmitted diseases were found to be associated with unprotected sex among users of the drug, he said.

Long-term use of ecstasy was also found to be linked with psychosis, as was other stimulants, he said, adding that these drugs can cause hallucinations and heart failure in overdose cases.

Trafficking of ecstasy is considered a crime under Sections 65, 66 and 67 of the 1979 Narcotics Act, which carries a maximum penalty of the death sentence, he said.

The ONCB chief cited research of narcotic drugs in the market which showed that ecstasy pills are popular among Caucasians. Ecstasy originated in European countries, while crystal meth and methamphetamine are produced in the Golden Triangle.

This resulted in a rapid spread of ecstasy pills nationwide. Drug gangs mostly smuggle drugs via delivery in parcels from international shipping operations.

In a bid to curb ecstasy smuggling, the AITF was formed from the cooperation of the ONCB and the NSB, the Customs Department, and the Armed Force Security Centre, he said.

With information sharing with international narcotics suppression agencies including those of Germany and the Netherlands, the AITF had previously cracked down on a large number of ecstasy traffickers, Thai nationals and foreigners in Bangkok and all other regions of Thailand, he said.

Along with cracking down on ecstasy smuggling, seizing assets owned by the busted traffickers and their accomplices was a key measure adopted to enhance the performance of ecstasy suppression by the NSB and its partners, he said.

Cooperation with international anti-narcotics agencies was also a key to success in the NSB's ecstasy suppression operations, which were focussed on not only the distribution of the drug via the postal service but also smuggling of the drug along the border line, he said.

Also, 1,482 police stations nationwide were coordinating in setting up drug checkpoints in various places at different times to catch up with drug traffickers who were attempting to avoid security checks while transporting the drugs from border areas into Bangkok and other large cities, he said.

Other than the conventional security checkpoints, new technology including an electronic system capable of detecting car licence plate numbers and analysing travelling routes of the same vehicle has also been adopted to improve efficiency of drug suppression, he said.

Regional cooperation also has a key role in Thailand's suppression of ecstasy and other drugs, he said.