People step up to lend a helping hand

Monks, celebrities, and common man are all doing their bit to fight Covid-19

With the number of Covid-19 cases in Thailand soaring past the 1,000 mark and deaths rising to six, life seems to have ground to a halt as people are having to stay at home under the Emergency Decree.

Yet this has not stopped people from extending a helping hand. Though people are discouraged from meeting one on one, many Thais, including celebrities and entrepreneurs, are doing their bit.

Launched a few days ago, the #GoWith20 campaign calls for Thais to donate 20 baht to support health workers, the "real heroes", by providing them with protective equipment and food.

Though the campaign was started by some regular folk, it is now being endorsed by celebrities like TV personality Vuthitorn "Woody" Milintachinda and actress Urassaya "Yaya" Sperbund.

The campaign's hashtag #GoWith20WinsCOVID19 was one of the top trends on Thai Twitter and has raised more than 23 million baht since it started.

"I want to give moral support to all those who have been affected by the virus and medical staff who are working hard to stop it from spreading," Ranee posted on Instagram.

Though the public has been urged to stay indoors, hospital employees have to continue working for long hours, day in day out, putting themselves at risk of contracting the virus.

"I have to wake up at 4 am every day to prepare the meals. Of course I'm exhausted, but I'm happy to help because doctors, nurses and medical staff are working tirelessly to save people's lives. I believe everybody should do what little they can to help. If you don't have anything to give, just stay at home. Even that is a great help during this period," Ms Jongjai said.

While Moo Tod Jeh Jong delivers fried pork and sticky rice to medical workers, Oshin, a Hainanese chicken-rice chain, is feeding people who have lost their jobs due to Covid-19.

Oshin, named after a Japanese TV series about a woman who works against all odds to build a supermarket chain, has 12 branches, and in front of each outlet a sign invites those who have lost their jobs to pick up a plate of khao man gai (chicken rice).

"Most of our customers are blue-collar workers. We know they are affected by Covid-19, but we don't want to see them disappear. I want to see the same old faces coming back to to eat at my shop," said Jantima Yokkam, 40, owner of one of the Oshin branches.

In Phitsanulok province, retail outlet Sanim is offering eggs and dried foods for free to people in its community.

"I want to show people that this is the time for us all to help each other as much as we can. We shall get through this crisis together," shop owner Chonticha Noikrin said.

Normally people offer food to monks to make merit, but during this time of crisis some temples have started giving food to people who have lost their jobs.

Wat Song Savoey Temple in Chai Nat province prepares 200 servings daily, which can be picked up at the temple by families.

"The temple is following the Supreme Patriarch's order that temples should step up to help people during such a hard time," said Phra Kru Prakarnsarawut, the abbot of Wat Song Savoey, adding the free meals will be provided until April 10.

Ordinary individuals are also helping. Kannikar Petchkaew, a reporter in Chiang Mai province has invited her friends to chip in by donating money or ingredients to prepare food for the unemployed.

She usually comes up with 100 meals daily, and has at times even cooked up to 400 servings if she can muster the resources. Yet she is not able to feed everyone.

"Some days I have to hand out queue tickets because there are so many jobless people who need food," she told the Bangkok Post. "I want to motivate them to hang on, that we will get through this tough time together."

With infections rising and straining medical resources, Thammasat and Chulalongkorn universities have turned their student dorms into field hospitals for Covid-19 patients with mild symptoms.

On March 25, Thammasat University's Dluxx dormitory was turned into a 308-bed facility, while on March 26, Chulalongkorn University launched its "CU V Care" project to provide free accommodation for students, staff or faculty recovering from Covid-19 infections.

"The university is helping patients during this difficult time with no extra charge, except for meals. In the next phase, we will expand nursing facilities and accommodate the public," said Narin Hiransuthikul, vice president of Chulalongkorn University.

Hotels like Punjadara in Korat and Bonanza in Khao Yai are offering rooms as quarantine facilities, while Centara Hotels and Resorts Group has announced it will be on standby to offer rooms for at-risk travellers who need to isolate themselves. 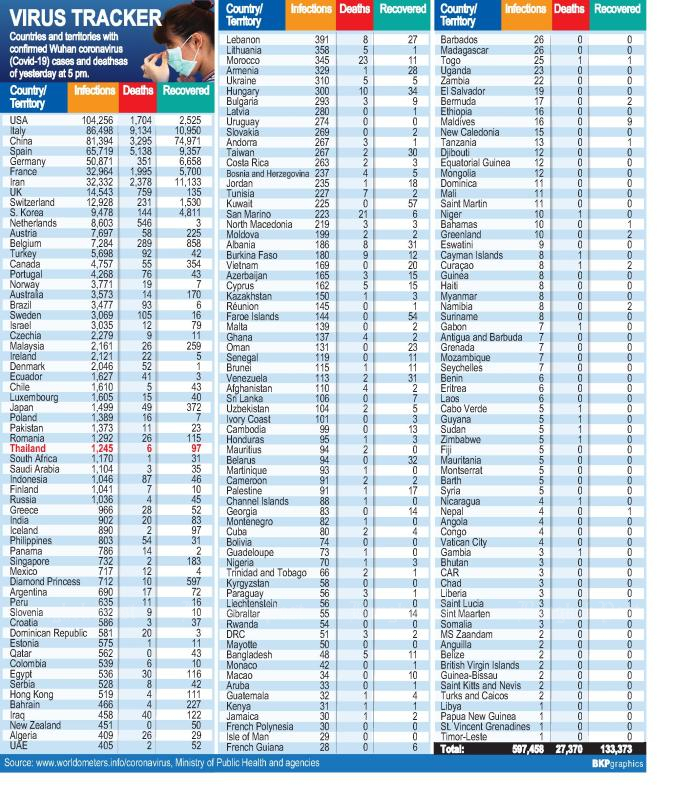 Malaysia’s central bank on Wednesday raised its benchmark interest rate for a second straight meeting in a bid to tame inflation and signaled more measures going forward will be gradual.