Veteran politician Utain Shartpinyo is using the issue of mounting rubbish and traffic congestion in the capital as a political platform to garner votes for the Bangkok election next year.

He is the former water management adviser for the Yingluck Shinawatra cabinet and a former member of the Pheu Thai Party.

Mr Utain has pledged to utilise urban tech innovation similar to Osaka's to solve the rubbish problem and also reduce traffic congestion if he wins the election. "I have always liked the traffic management in Osaka," he told the media during a sponsored press trip to the Japanese city earlier this year. Mr Utain paid for the trip to show reporters the kinds of policies he would adopt if he was governor.

"When I was at a set of traffic lights [in Osaka], all other lights in the direction I was going were red. When they turned green, all the lights along the road turned green, which helped traffic flow," Mr Utain added. "That's different from Bangkok where [traffic lights are unoptimised]. I think I will apply Osaka's traffic management in Bangkok."

He said he has been learning a lot from the Osaka experience, and not just in the area of traffic control.

From a distance, the colourful structure of the Maishima Incineration Plant might give the impression the building is cast in modern architecture.

That is because the plant was designed by Friedensreich Hundertwasser, a famous Austrian artist and architect.

The Maishima Incineration Plant is not only visually pleasing but it is also known for its environmentally friendly rubbish disposal methods.

According to Hitachi Zosen Corporation -- the company that provided the plant's tech innovations and operates it to this day -- the facility can handle 900 tonnes of waste per day.

The Maishima also serves as a power plant. It uses heat from burning rubbish to run turbines capable of generating 32 megawatts of electricity a day. 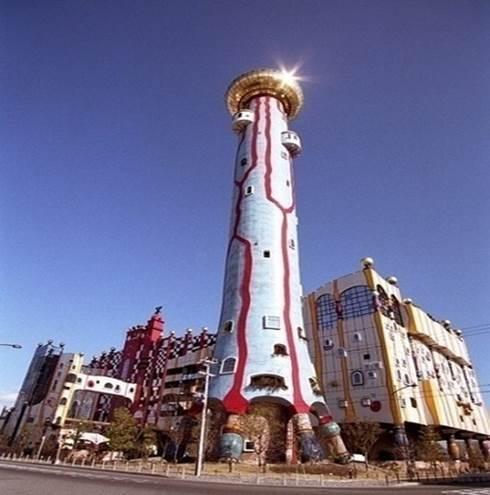 The plant's incinerator utilises extreme heat, no less than 850 degrees Celcius, to burn waste. Due to the high temperature, the risk of dioxin and carcinogenic particles being released into the air is avoided.

Mr Utain said the Bangkok Me­tro­- politan Administration (BMA) should have a dependable waste incineration system instead of piling rubbish in landfills.

Currently, most of the waste produced in Bangkok is sent to suburban landfills. A plan to build a rubbish incineration plant is being probed for corruption.

"The Maishima Incineration Plant is an example of how waste disposal can coexist with the community," Mr Utain said. "The plant is feasible in terms of finance as it can generate electricity."

Mr Utain also took the media to visit Osaka's automatic flood prevention system called the "FlapGate neoRiSe". The system was developed by Hitz Disaster Prevention Solutions Laboratory, a construction engineering firm that has also devised other urban management technology. Under the system, a concrete wall is used to act as a dam that will gradually lift itself to block water automatically.

The system is designed for large industries, vulnerable communities and railway stations.

As Japan is prone to earthquakes and tsunamis, the system is designed to rise as high as 30 metres during an emergency.

Mr Utain told the media that as governor he would solve Bangkok's traffic congestion problems within 100 days.

He said issues can be solved by redirecting traffic, reducing the number of bus stops and building new roads above canals to "increase road traffic space to alleviate traffic congestion".