Calls for back-to-basics approach to prevention

Activists use black masks to represent "devils in teacher's clothing" to denounce sex attacks by teachers on schoolchildren at a protest at the Education Ministry on Ratchadamnoen Road on Friday. (Photo by Chanat Katanyu)

The three child sexual abuses cases which have taken place this month are clearly a wake-up call for all stakeholders to come up with better prevention methods.

The latest case, of repeated gang rape in Mukdahan's Muang district earlier this month, was the most disturbing. Thais were shocked to learn the seven suspects were five teachers and two alumni from a public school. They were charged with allegedly raping two student girls aged 14 and 16.

According to the police, the suspects first assaulted the victims in March 2019 and carried on at least six times until March this year. Some of the attacks even took place inside the school premises. The suspects denied the charges and were released on bail of 200,000 baht each.

Another child abuse case took place in Chumphon's Pathiu district. A 32-year-old music teacher was accused of raping a 12-year-old female student at a resort. The father of the girl lodged a complaint against the teacher who denied the allegation.

Another child abuse case occurred in Buri Ram's Ban Dan district when a 39-year-old teacher was arrested on charges of performing obscene acts on a 12-year-old student. He has admitted groping, but denied having sex with her.

These alleged child sexual cases have gained significant public attention, raised concerns about the lack of protection for children in schools and prompted calls on the authorities involved to reinforce their efforts to prevent sexual harassment in schools. The Bangkok Post talked to a variety of stakeholders including educators, child experts, policymakers, police and criminologists, asking them how the problem can be dealt with, particularly the school gang rape case in Mukdahan. 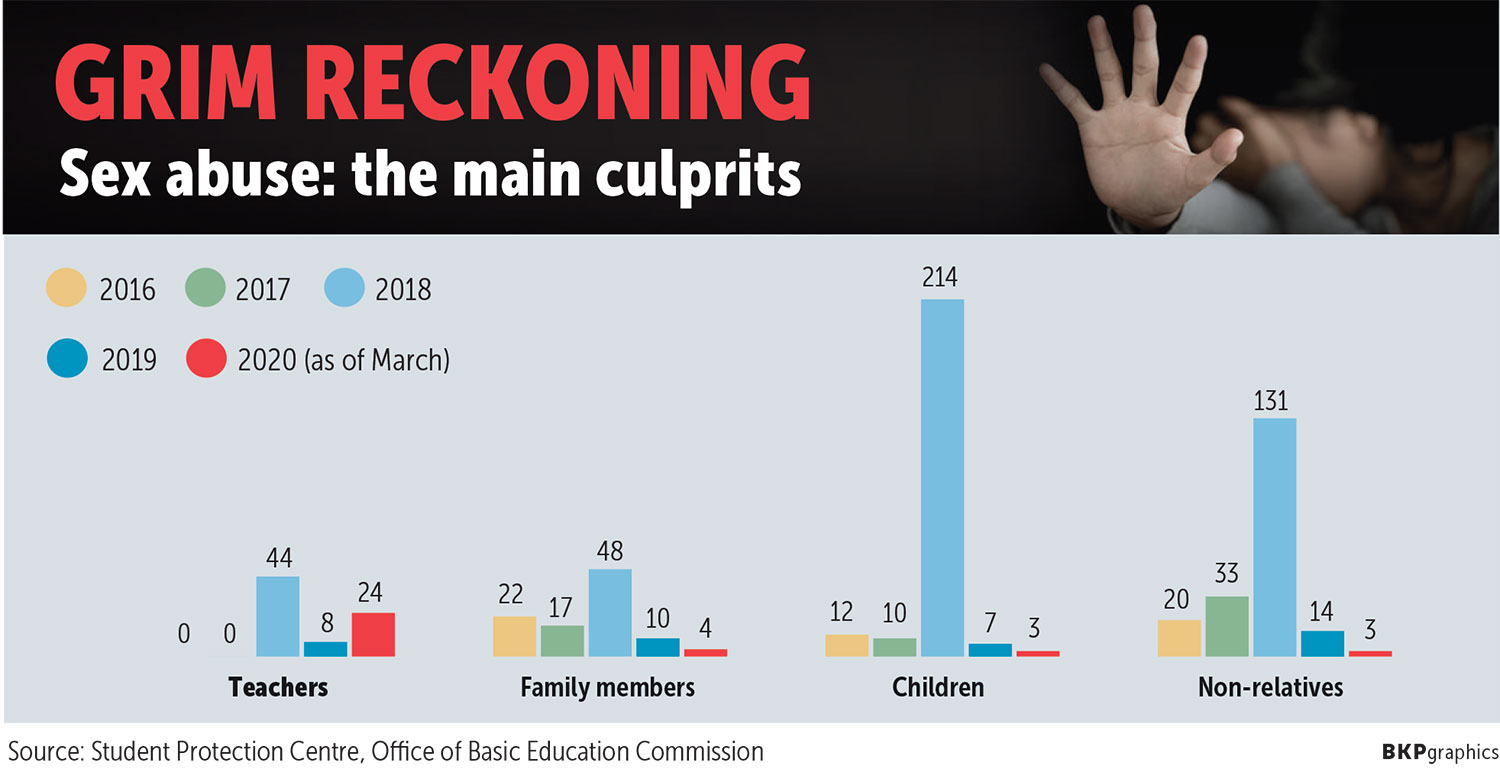 "Schools must be safe havens for children and no child should suffer from any form of violence in schools. Teachers must be the ones who protect children in their care, not the ones who harm them," he said.

Mr Athapol said the supportive comments made by colleagues of the suspects also show how nepotism comes first in the Thai school system, not teachers' professional ethics nor morality. "These men were sexually exploiting their students and treated the school as a brothel for over a year, yet their superiors and colleagues thought nothing was wrong with it.

"It is impossible that nobody knew about it, but nepotism made other teachers turn the other way. Had it not been for the fierce anger from the public, these men might have been spared by the school's nepotism again," he said.

Mr Athapol said although most Thai schools have a student affairs division to provide support to students outside the classroom, many lack accessible and child-sensitive complaint mechanisms for students who are sexually abused. "Most students who are victims of sexual violence don't know who they can turn to. They are afraid their complaints may not be taken seriously and fear reprisals. They need someone or a channel they can trust,'' he said.

Mr Athapol said confidential reporting channels should be established in all schools and staff and students alike must know how to use them. Schools should also have clear referral pathways to social welfare agencies and work with multidisciplinary teams to provide support to survivors of violence and abuse.

Teachers and other school staff can play an important role in preventing sexual harassment before it takes place by observing children, watching for signs of violence, abuse and neglect and reporting it when they have concerns, he added.

"Teachers should make a list of students in their classes who are vulnerable and at greater risk of sexual abuse such as those come from broken homes or live with step-parents or a single parent. More importantly, they must dare to stand up for victims even if the abusers are school staff members or their co-workers," he said.

According to the Office of Basic Education Commission's Student Protection Centre, 624 student sexual assault cases were reported to the centre over the past five years. Out of these, 76 cases were committed by teachers or school staff.

''I'm certain that the true number is larger since so much of the problem goes unreported,'' Mr Athapol said.

The expert also warned schools not to focus on protecting girls as sexual assaults can happen to anyone. Boys and LGBT children can fall victim to sexual predators as well.

"Boys and LGBT children have many of the same feelings and reactions as other survivors of sexual assault, but they may also face some additional challenges because of social attitudes and stereotypes about men and masculinity,'' he said.

Child rights advocate Ticha Na Nakorn has called on the Education Ministry to rehabilitate the education system by reforming the spirit of the profession. She was referring to the case of the school gang rape by five teachers in Mukdahan.

"I do not come out in public to attack this profession because there are still decent teachers about. The challenge is how to help these good teachers and whistleblowers protect children," said Ms Ticha.

The Justice Ministry is mulling compensating the victims by 110,000 baht each, while child psychologists from the Ministry of Social Development and Human Security have provided counselling. The 16-year-old victim, who is also a witness in the case of the 14-year-old, has been placed in the care of a Justice Ministry facility in Mukdahan province.

Education Minister Nataphol Teepsuwan said he has ordered a complaint centre set up at the ministry for students to report any sexual misconduct by their teachers. He also instructed provincial officers to probe the school's director for possible negligence.

The five teachers among the accused were immediately suspended and their licences revoked, Mr Nataphol said.

"This is a serious offence and I will not tolerate it. School is a second home to students. If the place is unsafe because of a teacher's behaviour, I have to put an end to it," the minister said. "Under my watch, there will be no more transfers to inactive posts," he added. "Every offender will be immediately fired."

Unicef has called on the Ministry of Education to consider a review of protection measures, monitoring mechanisms and response protocols.

"The review, in partnership with professional bodies such as the Teachers' Council of Thailand, can also help in strengthening the code of conduct for teachers and other education staff, further ensure these codes are effectively implemented, and appropriate sanctions applied," it said.

Teacher training curricula and professional development opportunities should include training about the causes of school-related violence and abuse, prevention activities, referral and response frameworks and ethical conduct.