Lay of the land 'murky'

Poor farmers still lose out to the rich and politically connected

Hotels and guesthouses are developed on state land plots including Sor Por Kor in Phu Thap Boek of Phetchabun's Lom Kao district despite the fact the land was given to residents for farming.

A cautionary tale is the case involving Suthep Thaugsuban, a veteran politician and co-founder of the Action Coalition for Thailand (ACT), now one of the government coalition parties.

The Chuan Leekpai government in 1995 had to dissolve parliament and hold a new election after its government was heavily criticised over the "Sor Por Kor 4-01 scandal".

Mr Suthep -- who was deputy agricultural minister at the time -- had been exposed for allocating Sor Por Kor land to wealthy politicians in the south.

A more recent transgression is the case of Pareena Kraikupt, an MP with the Palang Pracharath Party (PPRP). It was found that 682 rai out 728 rai of her family's poultry farm in Ratchaburi province's Chom Bung district is Sor Por Kor land.

That land is only given to poor farmers -- but Ms Pareena's net worth is reported to be 163 million baht.

Another glaring case is in Nakhon Ratchasima's Wang Nam Khiao district, known as the country's largest resort for wealthy elites from Bangkok. Indeed, most of the land plots where the resorts are located are classified as Sor Por Kor land.

The misuse of Sor Por Kor land has put a spotlight on the failure of the 1975 Agricultural Land Reform Act. This law was written four decades ago to distribute land to poor and landless farmers for harvesting.

Each farmer is entitled to a maximum of 50 rai. They cannot sell it but can hand it down to their children.

The issue of Sor Por Kor land was brought up again early this month when the Agricultural Land Reform Office (Alro) was reported to be revising the law to permit hotels and resorts to rent its land.

The amendment has been pushed by Deputy Agriculture Minister Thamanat Prompow, an MP from the PPRP.

Last week, he said authorities will repossess Sor Por Kor land illegally occupied by resorts and hotels, then rent the land back to the current occupants.

Late last December, he ordered Alro officials to revise a ministerial regulation that will pave the way for the office to buy back land from farmers and their descendants who want to give up farming.

He said 15% of the 35 million rai of Sor Por Kor land is no longer fit for farming purposes.

"Not all forest land is suitable for farming," he said, adding this is "the right time for doing the right things".

"We do need to amend the regulations by bringing them in line with the current situation. It is useless demolishing those resorts as they could generate income to the ministry and communities nearby."

The Alro source told the Bangkok Post the ministry has set up the subcommittee to revise Alro's regulations that will allow hospitality businesses to rent its land. The first meeting, held this month, made no progress.

"The current law only authorises Alro to rent land to people that conduct activities in line with land reform policy and the land must not exceed 50 rai," the source said.

The 1975 Agricultural Land Reform Act is rigid. The law permits land to be used for farming only. Despite this act, there is a window for renting land for other "land reforming" activity.

Indeed, Alro has had bad experiences when it tries to rent Sor Por Kor land to non-farming activities.

Alro has been sued by villagers in the Administrative Court and lost for leasing land plots for other activities: for a mining company in Lampang province, and a wind energy company in Chaiyaphum province.

The court ruled in 2013 that Alro was wrong for leasing land for mining. It also lost a case in 2017 when the court found it was wrong to lease Sor Por Kor land for wind energy projects.

Yet both projects were allowed to rent Sor Por Kor land with the help of the junta government.

In a bid to circumvent Alro's law, the National Council of Peace and Order (NCPO) in 2017 issued an order permitting mining and energy projects on Sor Por Kor land.

Prayong Doklamyai, an adviser to P-Move, a civic group that monitors public policy on land distribution and reform, said Mr Thamanat and Alro could face a lawsuit in court for renting land to a hospitality business.

Mr Prayong said "the best way to carry things out is to amend the law through the parliamentary system", allowing society to be informed and debate to be held. 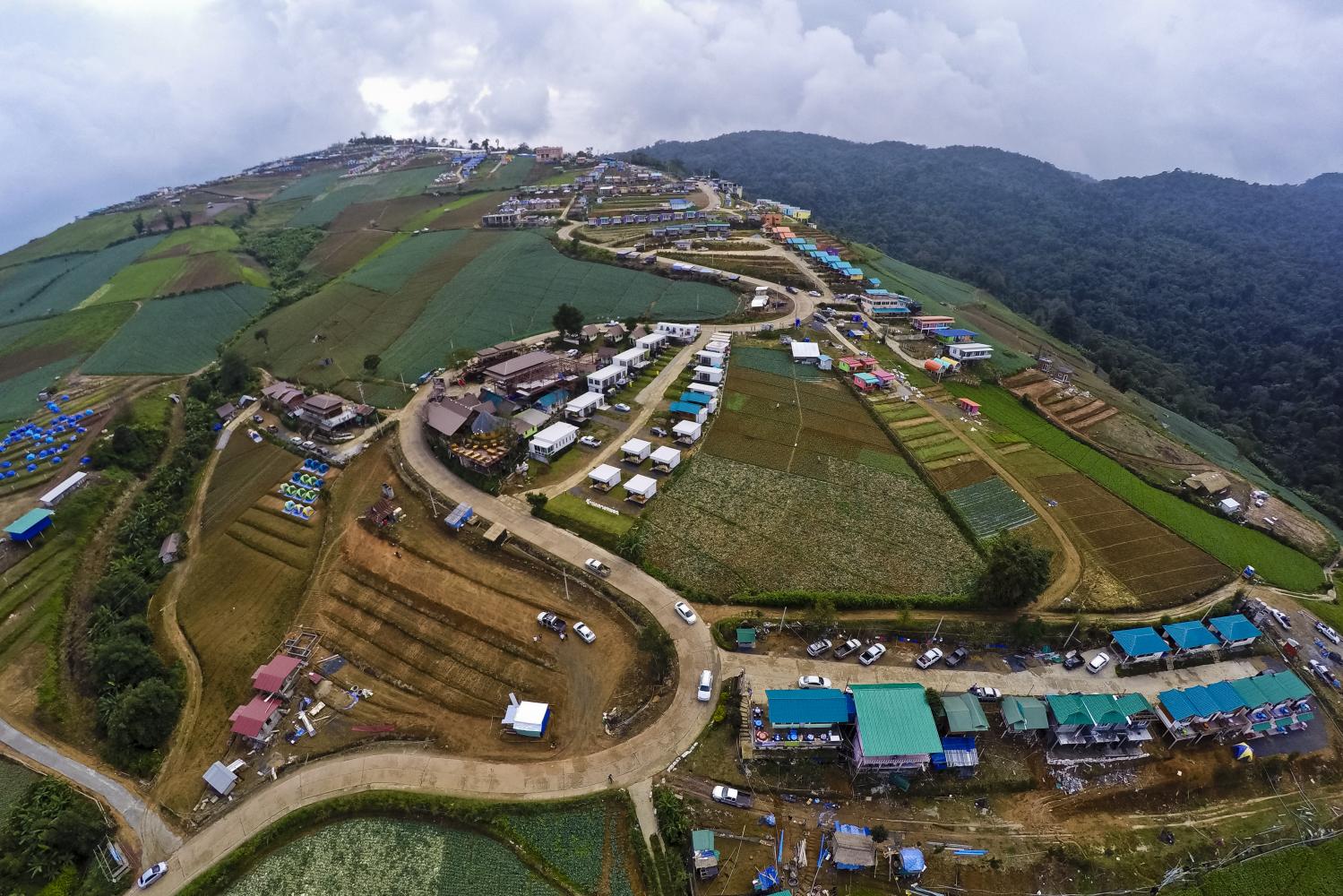 TRUTH IS OUT THERE: Buildings have sprung up all over Phu Thap Boek in Phetchabun's Lom Kao district, which has become a popular tourist destination despite being set aside for Hmong hill-tribe people. Most of the area is 'Sor Por Kor' plots.

Indeed, most of the 30 million rai of Sor Por Kor land was originally forest reserve under the 1964 National Forest Act. The Act has a provision that allows private sectors to rent the forest land.

By using these means, Alro can still maintain its philosophy and integrity as a land reforming agency for farmers, Mr Prayong said.

"The government arrests poor farmers for staying in national parks," he said.

"Some have been jailed and many have nowhere to live. But the government is going to bend the law to whitewash resorts and hotels who had encroached Sor Por Kor land and help them to rent out these plots lawfully."

"Farm land is diminishing and most of it is in the hands of rich landlords and companies. Alro should maintain its philosophy to protect land for small-scale farmers. What will happen if Alro rents out land to business activities," he said.

Alro has 46.83 million rai of land under its control, and 44.55 million rai has been allocated for farming purposes.

Most of the land was given by the Department of Royal Forest, which includes fertile and deteriorated forest zones. The department will negotiate with Alro for recalling the land.

So far, 2.28 million rai has been rezoned for communities and buildings, including resorts. A survey found 1.02 million rai was sold to outsiders.

In the past resorts have been prosecuted for occupying Sor Por Kor plots.

But the policy of Deputy Minister Thamanat can change the Alro's direction. Land that the state gave Alro for farming purposes will go to serve other sectors.

The source also voiced concern that fertile forest will be sacrificed for resorts.

"Alro must show that the new regulation is for existing resorts on Sor Por Kor land only, not for the new ones," he said.

It is feared more hotel and resort operators will rush to snap up Sor Por Kor plots as rental rates will be cheap.